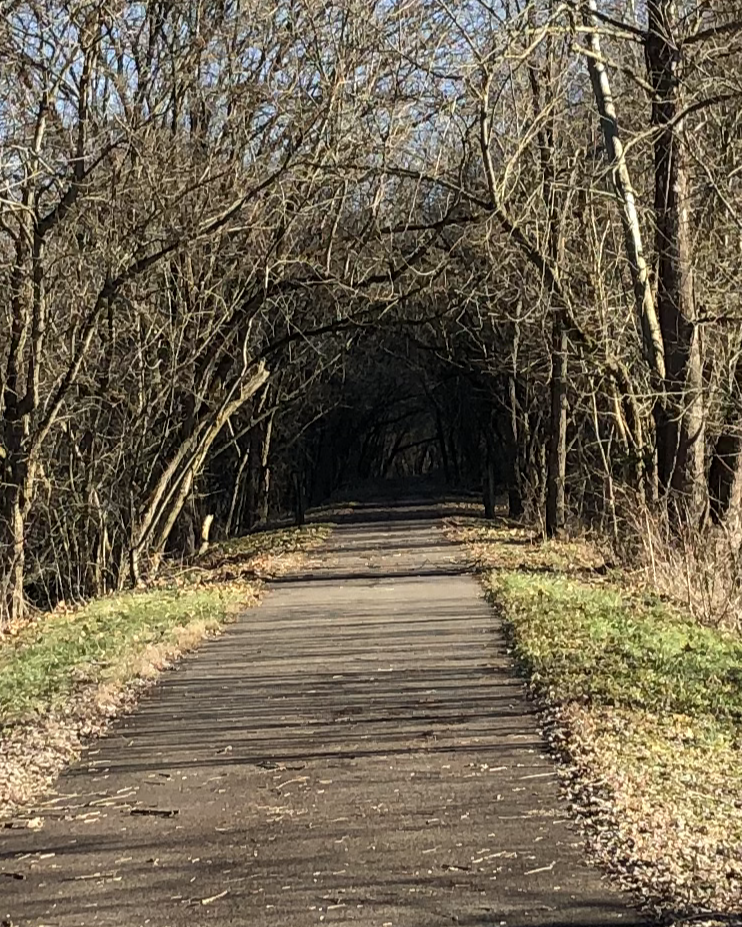 The “black hole” on the bike path south of Chauncey. 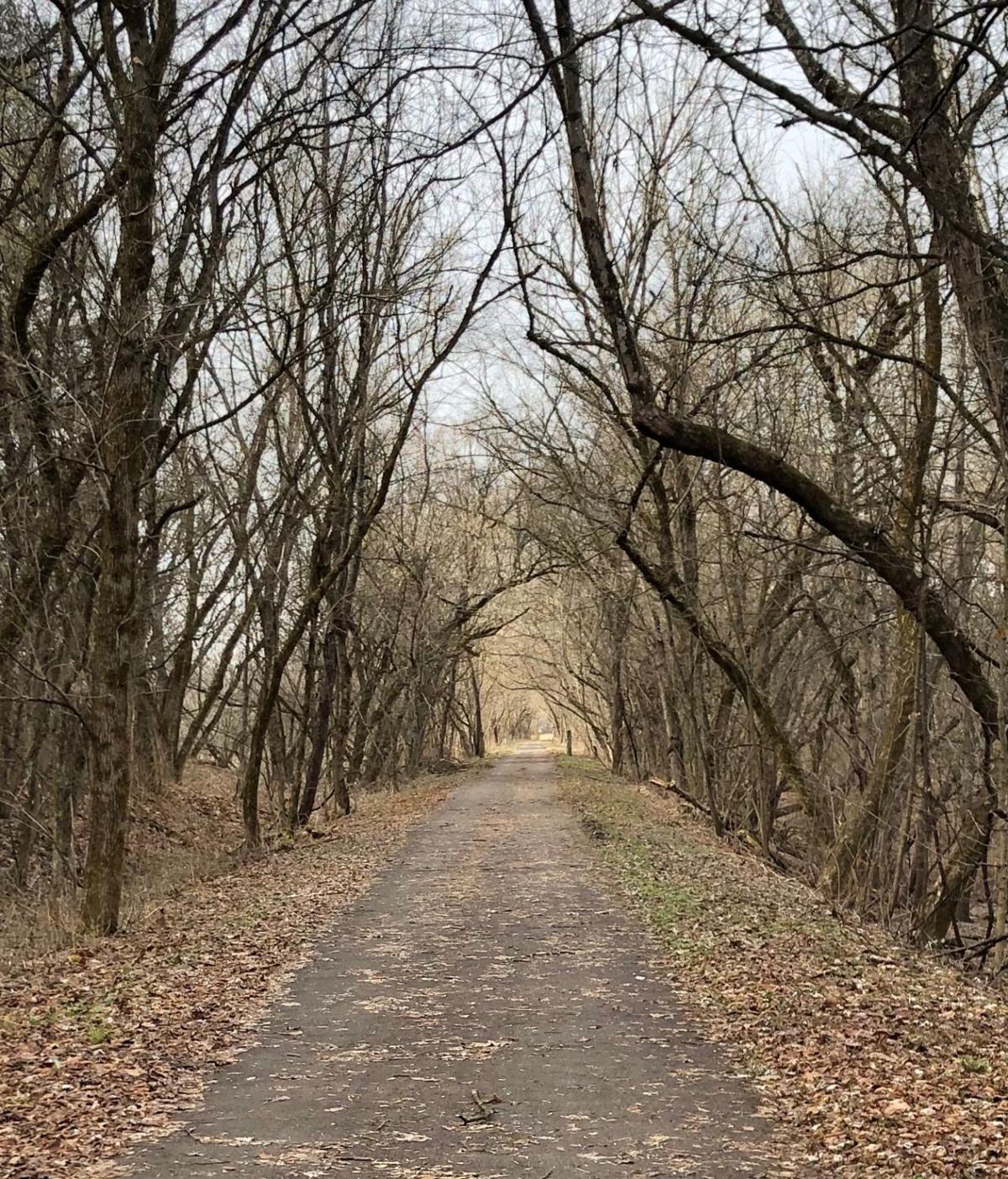 The “black hole” is not so dark when you’re inside looking out. 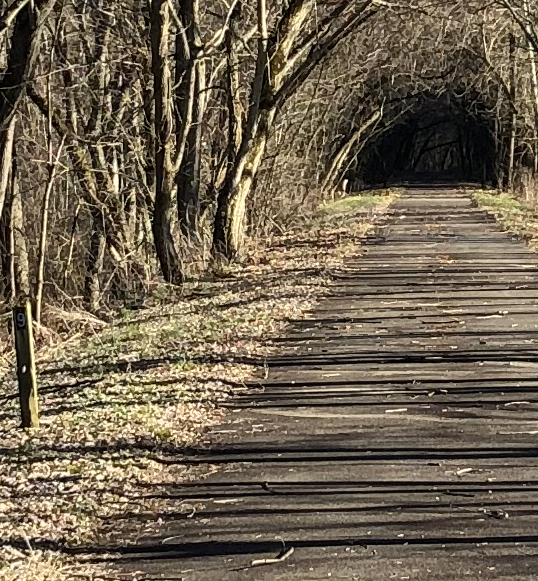 Miler Marker 9 on the bike path between The Plains and Chauncey; beware the black hole.

With The Athens NEWS now located in the Athens Messenger building near The Plains, I’ve gotten into the habit of taking lunch-break walks on the nearby Hockhocking Adena Bikeway. Walking recently, I encountered a black hole. Stay with me here...

The black hole hit me like a metaphysical hammer – maybe as a metaphor for the direction it appears this country and world are heading.

My black hole (think of me as Capt. Ahab and the black hole as Moby Dick) revealed itself on a bright early December day on a stretch of the bike path that parallels River Road, on the southwest side of the Hocking River just south of Chauncey. Walking southeastward beside a large cornfield, one draws closer to an area where the trees close up tight above the bike path. From a short distance, maybe 100-200 yards, the entrance to this natural bower looks menacingly dark. (See photo above.)

If you’re strolling along contemplating depressing topics such as national politics and/or local debates that seem pointless and destructive, being confronted by a yawning mouth of darkness can be unsettling.

On the day I encountered the black hole, I was pondering deep stuff, in particular the deflation of truth as valuable currency in this country. Not long ago, possessing and speaking truth could be used to your advantage. If you spoke with honesty and could prove it, you’d likely have a leg up on an adversary who lacked that asset. Your light could trump their dark.

That’s not so much the case any more, thanks to a presidential administration and its allies in Congress and the media for whom truth is subordinate to scoring points against their perceived enemies, and who attack and demean any facts or fact-tellers that threaten their power.

It’s hard to imagine anything more dispiriting than watching a parade of courageous career diplomats, at least two of them decorated war heroes, testifying to the president’s misdeeds during the House impeachment hearings, only to be attacked, berated and ridiculed by GOP House hooligans, and called “human scum” by the president. With no motive other than public service and patriotism, they spoke the truth and paid for it. Meanwhile, the opinion polls have hardly budged.

Similarly depressing has been the refusal of any of the president’s allies to address his unwillingness to produce one single witness with exculpatory testimony, with former and present top national-security and staff officials topping the list of no-shows. Mulvaney, Pompeo, Bolton. If the president is innocent, why not urge them to testify and back up his story? The answer is obvious. Republicans who cry about process, then think it's OK to block witnesses who can prove or disprove the case. How's that for process, a trial without witnesses.

During my bike-path trek that day, I also was beset by depressing thoughts of an ongoing local controversy. Athens city officials’ backing a plan to help fund a mountain-bike and general-use trail system north of Chauncey – a project that evidence suggests will boost the local economy. It has triggered a lot of negativity fueled more by attitude than facts.

The tone of smug righteousness and contempt for someone trying something bold and different recalls the negative reception back in the 1990s when a county commissioner from Nelsonville ridiculed the idea of building a bike path between Athens and Nelsonville. At the time, he suggested that this was a costly pipe dream that would only benefit hippies and liberals in Athens.

As it turns out, the Hockhocking Adena Bikeway has been a wild success, attracting all sorts of people. Joining Athens and Nelsonville, and all points in between, the bike path is now counted among the chief tourist draws to our beautiful area.

But contemplating the negativity being heaved at the new project somehow fit my walk toward the black hole that day on the bike path.

ON TO SATURDAY night when Athens High School graduate Joe Burrow – nearing the end of his impossibly successful college football career – cast a cleansing spotlight on the dark. In his emotional acceptance speech upon winning the Heisman Trophy, Burrow detoured from the usual thanks to teammates and coaches long enough to deliver a shout-out to southeast Ohio and Athens County.

According to Burrow: “Coming from southeast Ohio, it’s a very, very impoverished area. The poverty rate is almost two times the national average. There’s so many people there that don’t have a lot, and I’m up here for all those kids in Athens and Athens County that go home to not a lot of food on the table, hungry after school; you guys can be up here, too.”

That short but evocative mention of the persistent poverty in our area – spoken from a stage in New York City to an ESPN audience of many millions – sparked an incredible outpouring of charity from points far and near, from the bayous of Louisiana to the hills of southeast Ohio, and farther afield. A Facebook fundraiser inspired by Burrow’s speech had generated donations exceeding $448,000 as of 11 Wednesday night.

YOU’RE PROBABLY WONDERING what all this has to do with my distracted obsession with a black hole on the bike path.

With Joe Burrow’s example of shining a healing light on the darkness of food insecurity in southeast Ohio in mind, I decided to explore my black hole a little closer. When I finally entered the bower of overhanging trees limbs the other day, my vision quickly adapted to the dark. Familiar and comforting everyday items – trees, fences, vines, brush, standing water – emerged, and the gaping black maw dissolved into an ordinarily shady section of the bike path. Turning around to head back to my car, I instantly spied, you guessed it, light at the end of the tunnel. As bad as things seem, there’s still a lot of good happening in the community and the world at large. Don’t give up. Just keep on walking.

The Athens News is always a wonderful read and a valuable perspective.

Wishing all concerned a very Merry Christmas and a happy and most prosperous New Year.

Often times we tend to only see the darkness because the light is so brilliant. You might want to read “A Stoic Key to Peace of mind,” Seneca the Younger, An Antidote to Anxiety.

There is so much good news out there with a strong economy, a great jobs report across all protected classes, tax cuts aimed at the lower and middle classes, new trade agreements and General hope for the future. We see a very bright future, something we could have done but didn’t. JFK gave us the roadmap.

We do see a very dark hole with out list of political candidates. Several can’t run their own cities, several are millionaires, one has no idea what planet he is on and is fighting a scandal with his son. Some are socialist.

There is a very bright future for Americans and American workers and farmers, it’s all good,