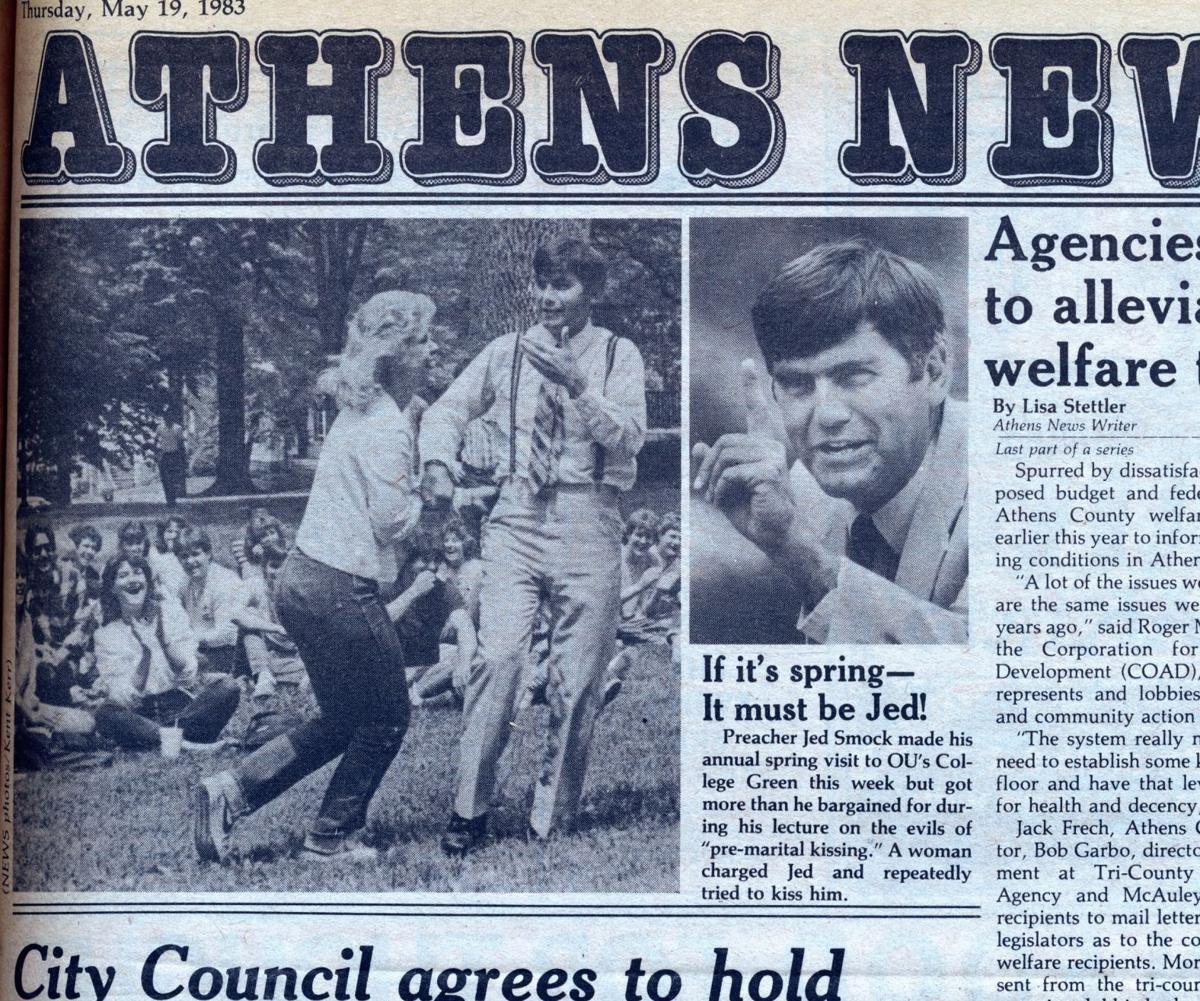 Throughout the ’70s and into the ’90s “Brother Jed” Smock visited OU and other college campuses where he would unfailingly rouse righteous anger among college students with his florid condemnations of immorality. This Athens NEWS clip from May 19, 1983, was one of the more benign of Jed’s visits to OU. 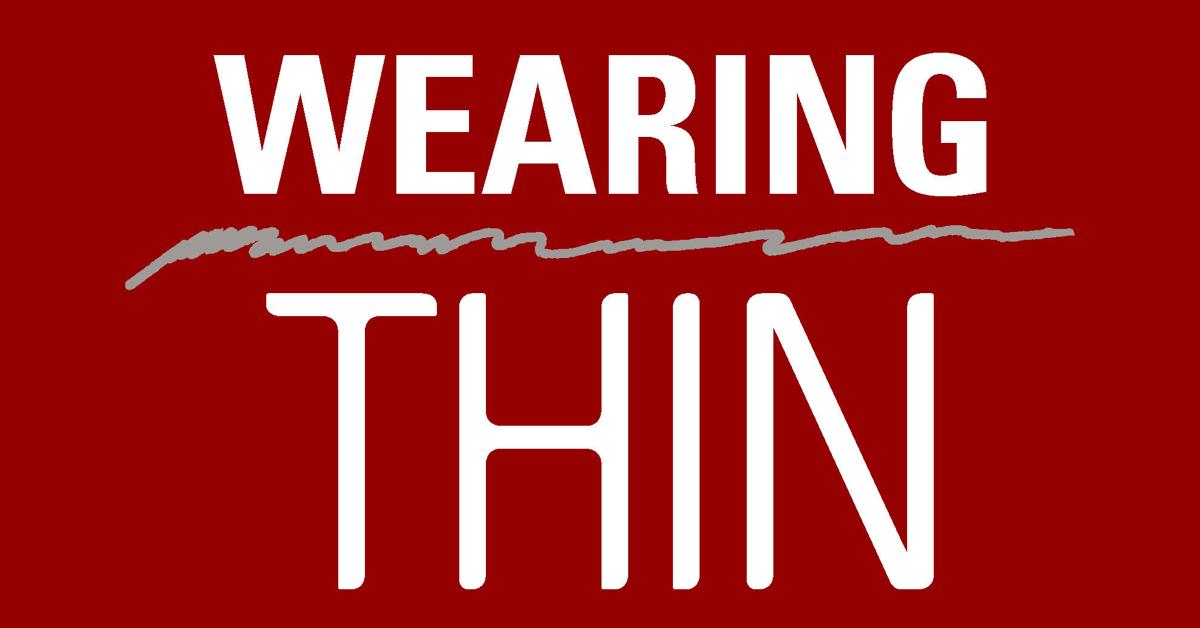 The donnybrook that broke out on the Ohio University campus Monday afternoon when so-called “gun-girl” Kaitlin Bennett arrived with a small entourage and quickly drew a huge crowd of mainly antagonistic students was both nothing new and something entirely new.

How can that be?

Contrary to the statements on social media in the wake of Bennett et al’s bang-up stroll through campus – that “OU students didn’t used to behave this way” – Bobcats have been giving hell to visiting moralizers, provocateurs and trolls since at least the mid-’70s when I attended OU. The notorious Brother Jed especially, but others as well.

Yet, in an important respect what happened Monday afternoon differed mightily from those Brother Jed versus liberal college student confrontations that took place every spring for decades on the College Green (and at other campuses across the country).

I’ll get to my point, but first a quick account of Bennett’s visit. According to reporting by campus news-site The New Political (whose reporters string for The Athens NEWS), Bennett arrived on campus Monday afternoon “accompanied by a towering bodyguard and members of her conservative activist website Liberty Hangout” purportedly to film a Presidents Day video asking students trivia questions related to the holiday (more on that later).

Rousted into action by social media alerts that spread like a California wildfire, an impressive crowd of OU students quickly surrounded Bennett’s group, hollering and cursing (with middle-finger “birds” thick as buckshot), and following Bennett and her friends as they took their short walk through campus and then left in a big orange pickup truck, surrounded by shouting, ramped-up students.

Before the truck (outfitted with a big, suggestive Iron Cross [Automotive] bumper on its front) could push through the crowd, many of the angry students (I say “angry” though many appeared to be having a swell time) flung water (or... I really don't know) at the truck while shouting and flipping the aforementioned birds. Several OU Police officers watched this happening, though they wisely (in my view) avoided arresting or physically restraining anybody as long as no one appeared to be threatened with harm.

Reportedly, during their walk on campus, Bennett’s group also received some supportive shouts and remonstrations, though observers (and the wealth of available video) confirmed that the antis decidedly outnumbered the pros.

As for 24-year-old Kaitlin Bennett, she first drew the adoration of right-wing media and warriors in 2018 when on the day after her graduation from Kent State, she caused a stir by openly carrying an AR-10 on that campus, three hours to the north of Athens. I’ll let our The New Political stringer add to her background from our story…

“In recent years Bennett has gone from a viral open-carry activist to a nationally known conservative media figure famous for creating internet videos where she primarily prods college students about social and political issues. She was not openly carrying a firearm Monday afternoon. She is also a contributor for Infowars, a highly controversial far-right media network known for promoting misinformation and conspiracy theories about events such as the Sandy Hook Elementary School shooting.”

There’s plenty more red meat for both sides available with a quick trip to Google or a look at the social media debate that erupted after Bennett’s Monday visit to OU, but I don’t have space (or stomach) for that here.

Bennett’s controversial visit to Athens and OU (by now widely covered by national media) in important respects resembled Brother Jed’s annual treks to OU and other campuses that started in the 1970s and were continuing into at least the late ’90s (see accompanying image from 1983).

Here’s what I remember about those mid-’70s visits: I’d be walking on or near the College Green on a lovely spring day. Noticing a small but noisy crowd gathered near the East Union sidewalk, I’d stroll over to see what was up. A dark-haired man wearing a white shirt, tie and suspenders would be haranguing students in the audience about their sinful ways, whorish clothing, or if any noticeable LGBTQ folks happened to be present, about the immorality of homosexual relations. He was very clearly and deliberately trying to get a rise out of them.

Talk about triggers! Many students in the audience would respond angrily or with sarcastic ridicule, blasting Jed for being intolerant, hateful, sexist, bigoted and homophobic. That, of course, would draw a bigger audience, creating one of those memorable “OU moments” that alumni still talk about decades later. The more people the better for Jed.

And of course, Brother Jed, no dummy he, could congratulate himself on creating exactly the scenario that he was looking for. A big crowd, a big event, and lots of attention. He’d leave Athens with prospects for bigger audiences in the future, and the ammunition to condemn liberal college kids as not only immoral and bound for the fires of hell, but as intolerant and judgmental hypocrites.

Gun-girl Kaitlin Bennett, in coming to Athens, sought the same sort of transaction but on a much greater scale. When she provoked what she exaggeratingly called a “riot,” she and her cohort filmed the whole shebang, and left Athens with a propaganda coup. Videos of the mass of shouting, cursing, bird- and water-flinging OU students will be circulating on the right-wing trolliverse forevermore.

And that’s where we see key differences between the Brother Jed of 1975 and gun-girl Kaitlin in 2020. The biggest crowd Jed ever drew back in the day likely was less than a 10thof what Bennett attracted on Monday. Jed didn’t have the benefit of Twitter and other social media to rapidly spread the word of his arrival, nor the means to distribute his negative conclusions about Ohio University students to millions of people after his departure.

The political right in this country today likes nothing better than to paint college campuses as hotbeds of radical far-left intolerance and contempt for the First Amendment. Any opportunity they get to prove that point is a major victory.

And I’ve got to hand it to them; those images from Monday that looked like an angry mob of intolerant OU students aren’t a great look for this university or higher education in general. I just hope they all vote their views.

Granted, Bennett has said and done bad things. Witnesses said that before she attracted the crowd on Monday, she was approaching students outside Baker Center, a companion operating a camera with her, and asking loaded questions such as “Why do gay people have special rights?” and to an African-American student, “Do you ever thank white people for the fact that you aren’t a slave?” Essentially throwing culture-war bombs at unsuspecting students for her propaganda video, Bennett deserves whatever repulsion comes her way. She’s God’s gift to Russia intelligence’s campaign to sow ideological discord and strife in our country and President Trump’s more instinctual efforts to do the same thing.

Yet, the Brother Jed lesson from 45 years ago holds true today. By eagerly playing a crucial role in Jed – or Kaitlin’s – circus, offering up that broad-side-of-a-barn caricature of an intolerant liberal college student, that crowd Monday played right into her hands.

Next time, fellow Bobcats, please consider following my mom’s advice when my older brothers teased me as a child, hoping for an embarrassing reaction: Ignore them and they’ll go away. (Full disclosure: That never really worked.)

Atrocious student behavior? Those habitually two bubbles off plumb believe everyone but themselves should maintain perfect decorum when they or other like-minded ne’er do wells start swinging bats wildly. Failing in that, they assign blame on those who offer proportional or relatively restrained situational response – much like the Brits who didn’t appreciate Colonial responses to their hoity toity expectations. Obviously some would like you to forget what country you live in and practice servility in light of assault. Judging from overhead photos, for those who need to keep score, it was OU Students several hundred, Gun Brat zero. Go team!

I disagree with your scoring. The toilet paper rolls were a nice touch. Such terrorists!

Maybe it's just bad memory but I always remember the Brother Jeb visits and Sister Cindy, if I'm remembering that correctly, getting laughed at a lot. Every once is awhile someone would blow up but as a rule people just had fun with it.

Is it by any accident that immediately below the article about brother Jeddd and the gullible, immoral college student, there appears an ad for "Spring Break Island" with a scantily clad co-ed baring her top to a crowd of spring break revelers?