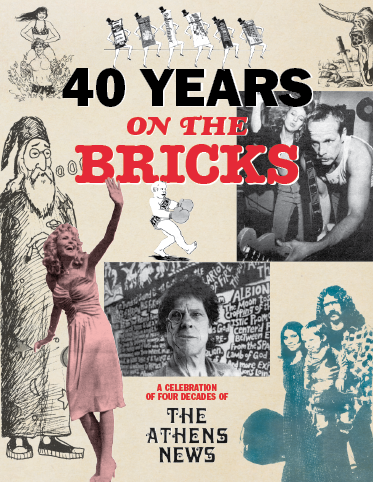 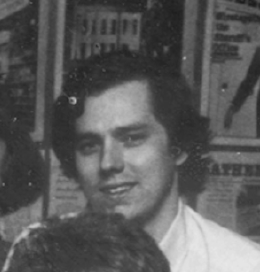 Dan Eickholt in an A-News staff photo from 1981.

It was a Friday afternoon in the spring of 1977 on the porch of the Frontier Room, the beer-and-wine bar inside Baker Student Center. Classes were done for the week, the sun shining full with warmth and optimism upon the youthful throng. There were pitchers of beer on the picnic tables. And I noticed Bruce Mitchell standing a few rows distant, a clipboard in his hand, in earnest communication with someone.

I knew Bruce from high school, and had run into him a couple of times after I had transferred to OU the prior September and was accepted into the journalism school. Bruce had graduated already, with a degree in rabble-rousing I believe it was, and was still around town. I must have told him previously that I was studying journalism, because when he finished his other conversation, he turned and walked over to me with his game face on and proceeded to tell me that he was starting a new newspaper in Athens, an alternative newspaper.

We talked back and forth for a few moments in a very enjoyable and informative manner concerning the details of his brainchild. It would be sold on the streets for 25 cents. He even had a printer in Canal Winchester (southeast of Columbus) lined up. A nascent journalism student, I asked him of his plans for selling advertising in his publication, which I quickly learned were non-existent.

The next morning we had a business breakfast, the results of which I became the new advertising director of the Athens ‘A’ News (the “A” was for alternative) in charge of selling advertising for a then intangible publication, and that Bruce had his first tax deduction for picking up the tab.

In 1977, there were no cell-phones, no smart-phones, no personal computers, no internet. Access to news and information could be obtained at the library, on television or radio, and by reading newspapers and magazines. Jimmy Carter, a Democrat, had just taken office after running on an ethics platform, in contrast to the last elected president, Richard Nixon, who had been run out of town on a rail for various high crimes and misdemeanors thanks to two city beat reporters from the Washington Post. Following the purging of Nixon, large segments of the populace had developed an appetite for truth, justice and a new order. And after Woodward and Bernstein and Watergate, journalism was the hot ticket for changing the world.

With neither the town-oriented Athens Messenger nor the student-oriented OU Post doing much in the way of world-changing, there was an opening for something new in local news. The Athens ‘A’ News started publishing every two weeks in April of 1977 (we neglected to put a date on the first several issues, so I may be off somewhat). The first couple of issues were a little rough graphically, but the articles hit their mark and served up solid alternative lifestyle stories and investigative reporting. Besides a byline, writers and photographers saw very little in the way of payment. Bruce recruited everyone on staff to stand on the streets for hours on end selling The ‘A’ News for a quarter. That, and the small amount of advertising we managed to sell, was probably barely enough to pay the printer. But we were young, united in our cause, and were ready to do battle with all the Goliaths of the world as we saw them.

Two of our standing features in those early editions were the “Landlord of the Month” by Melody Sands, which detailed the deficiencies of certain multi-property landlords of off-campus housing, and the “Dope-A-Scope,” which was a market report of the supply and prices of marijuana, cocaine, sopors (Quaaludes) and acid. The identity of the Dope Wizard remains shrouded in mystery to this day. And then who can forget the infamous  “Skinnydipper Guide,” which featured a full front-page photo of five free spirits, their naked bodies overlaid with a garish orange half-tone effect?

Over the next couple of years, the paper continued to grow, transitioned to free distribution, and increased its circulation and also the frequency of publication from once every two weeks to twice a week. I left my position as editor to take a job on a newspaper in Pennsylvania, but returned less than a year later after Bruce incorporated the business, and I became a part owner and general manager.

Editor Melody Sands ended up winning a First Amendment Award from the Playboy Foundation for her articles on the local housing inspection office, during which the paper sued the city and won (thank you, Tom Eslocker, rest in peace), forcing the city to make the reports public. She also invested in the paper.

The three of us comprised the editorial board, and we personally met with all of the local political candidates during each election. Our endorsements and political coverage were valued, even though we were just a few kids in our twenties trying to raise hell the best way we knew how to. We had become respected, if not respectable. We even had health insurance.

By the time I left the paper and moved to Hocking County in 1985, The Athens NEWS had become a going concern of eight years. We had the highest circulation of the three newspapers in town, could pay our staff reasonable wages, and were actually making a decent profit. Guy Phillips, another Upper Arlington High School graduate, was showing us all how to sell advertising, dress sharply and invest in real estate. Melody also moved on.

Terry Smith, who had several years of reporting experience out West and in the Ohio Valley, took over as editor, and he and Bruce and Guy devoted their vocational careers to making The Athens NEWS a successful and important part of the fabric of life in Athens County, and to making Athens the vibrant, progressive community that it is.

Good job to you three, and all of the numerous other dedicated souls over the years who contributed to that effort. Honestly, sometimes I don’t know how you did it. The newspaper business is a hard dollar.

I was a little saddened but not that surprised when Bruce and Guy sold the paper a few years ago. Terry is still doing a great job carrying the torch forward. I’m also somewhat saddened by the fact that all of these memories are from 30 to 40 years ago, which means, to phrase it gently, I am an old fart. Lord knows what our younger selves would think of us today.

Great article, thanks for the memories. Would love to see more photos along with it.