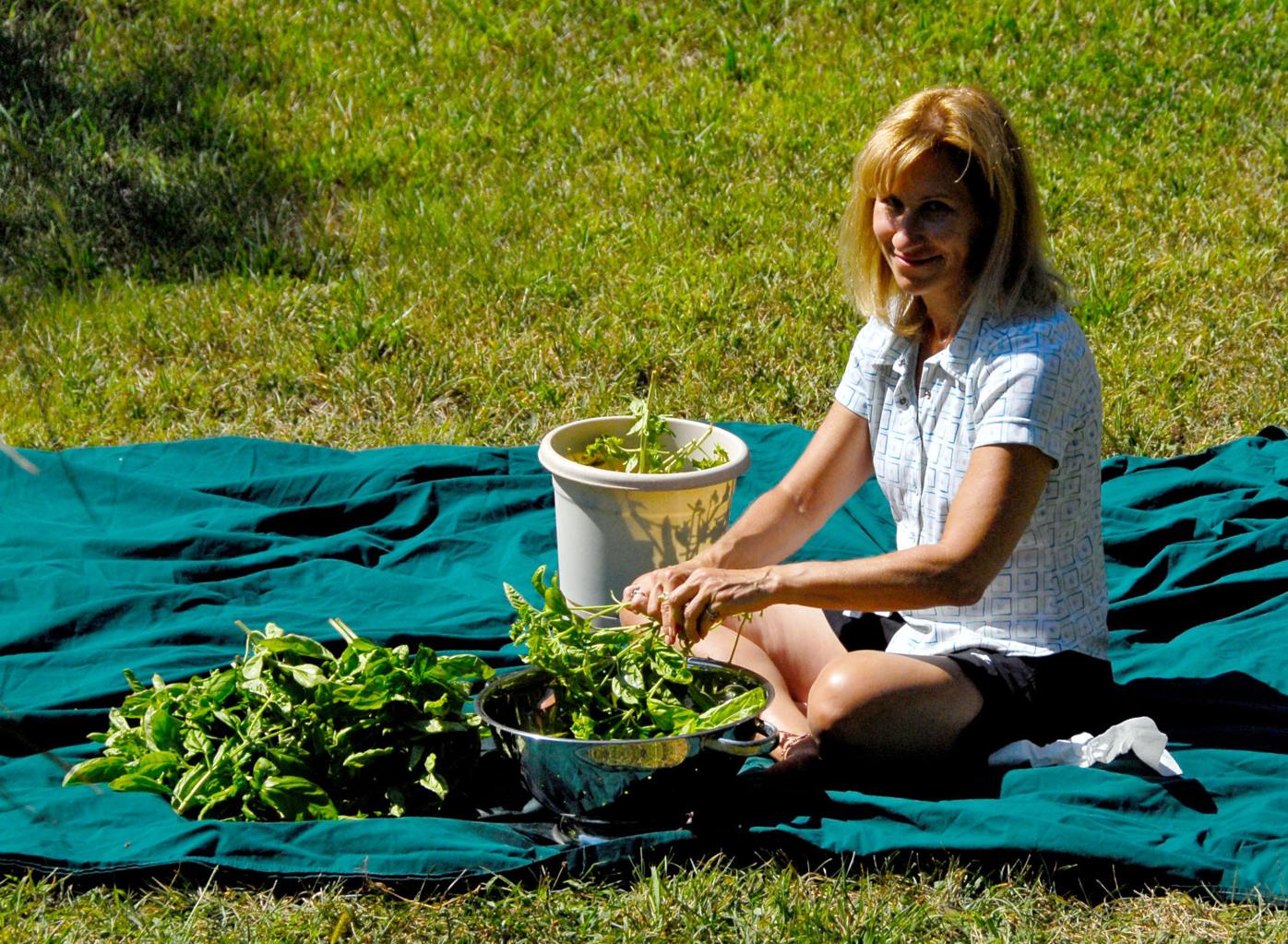 The 2008 basil harvest. Marjorie strips the leaves into the colander and puts the stems into the plastic flower pot. Photo by Dennis E. Powell.

The 2008 basil harvest. Marjorie strips the leaves into the colander and puts the stems into the plastic flower pot. Photo by Dennis E. Powell.

Over the years this space has featured the occasional recipe, things I’ve thought readers would like. Based on the response, my estimation in that regard has been correct.

It’s summer and our gardens are beginning to produce their produce. So let’s look at what’s available or soon will be, and maybe give a local twist to a couple of pretty tasty dishes. The first one was mentioned here, years ago, and with the rhubarb (you’re growing some, right? if not, why not? it requires little space and no attention) and strawberries in season, it’s well worth firing up the oven, even in midsummer, to make. It came from my late friend Marjorie:

Preheat your oven to 375 degrees and butter a three-quart rectangular or oval glass baking dish. You’ll need these things:

One stick of melted butter

One and one-half pints of strawberries

One and one-third cups of flour

A pinch or two of salt

Combine the fruit, granulated sugar, salt, one-third cup of flour and cinnamon. Put the mixture in the baking dish. Combine the remaining ingredients and sprinkle them over the fruit mixture. Bake for 35 to 45 minutes. Remove from the oven and allow to cool before eating. Serve it warm, with ice cream or whipped cream.

That’s the original recipe; I’ve modified it slightly around here, using virgin coconut oil instead of butter, because in a lot of uses it just tastes better and depending on who’s telling it it may be a little better for you. (Try it on popcorn!). The recipe once was a real lifesaver. I’d made a batch of it and had taken it to church one Saturday afternoon, having sung its praises to Father Marty and others there. I’d put it in the kitchen and headed over, early, for Mass. A couple who were early as well had arrived and one of them, who was diabetic, soon showed signs of insulin shock, which comes when insulin encounters too-low blood sugar. I ran to the kitchen and fetched a small piece of the strawberry-rhubarb crisp. The effects were spectacularly good.

(A tip, since I’ve mentioned strawberries: When you’re buying them, you can determine their quality by smelling the container of berries. If it smells like strawberries, they’re going to be good. If it doesn’t, then they won’t. Of course, local, pick-’em-yourself strawberries are the best, when you can find them.)

Another thing you should be growing – and it’s not too late to start, if you grow from store-bought plants instead of seeds – is basil. If you have a flower pot and some dirt, you have all that you need, though of course it grows in gardens, too.

There are all kinds of things you can do with basil. The best, in my estimation, is to make pesto. It’s easy and the stuff freezes and it’s therefore easy to enjoy home-made pesto in the dead of winter.

Making pesto is easy: put a quarter cuptof toasted pine nuts in a food processor with four peeled cloves of garlic, 3/4-cup grated Parmesan cheese, and 1/2 to one teaspoon of salt. Chop it all to granules, then drizzle in a half cup of extra-virgin olive oil. Add three cups or so of fresh basil and give it another spin, not quite to squished-worm-goo consistency, but finely chopped. Have it over pasta or seafood or on toasted Italian bread. Tasty, delicious, and simple.

Ah, but why not make southeastern Ohio pesto (which to the best of my knowledge was invented by me) ? First, grow some basil – green basil. I once tried it with purple ornamental basil, and the result was not as hoped, in that purple basil smells like licorice, not basil. Keep the basil weeded well – otherwise, you’ll get some pieces of non-basil plants in it and with few exceptions our local weeds are neither good nor good for you.

When you pick the basil take the individual leaves, not whole stems, indoors. Rinse them very carefully in a basin of cold water. There are lots of little insects that like to hang out on basil, and while they might add a small amount of protein to the dish, they are off-putting to many people.

Now, the local part: forget the pine nuts. Use black walnuts instead.

An important note about walnuts: If you’re like me, when you were growing up the word “walnut” meant native black walnuts, the ones that fall all over the place here every year, that come in strange-smelling green fruit that stain your hands dark brown when you open them. But now the marketers in California have tried to trick you into thinking that English walnuts are “walnuts.” English walnuts are those tan things you can buy all the time but that are typically seen around Christmas. They’re easy to get the meat out of (unlike our native walnuts), but as with so many things, you get what you pay for and English walnuts aren’t very flavorful. Real walnuts, our local black walnuts, are tasty. The texture is nicer, too.

If you want to harvest and crack your own walnuts and dig out the meat, good for you. It’s a lot of work, and if there were no other way to do it it would be worth the trouble. But it’s possible now to purchase black walnut meats at grocery stores and specialty shops, maybe even at the farmers market. They are more expensive than the California pretenders, but they’re worth every penny. When you’re making your pesto,use the walnut pieces instead of the toasted pine nuts. And don’t put them in at first but add them at the same time you add the basil, so the walnuts aren’t chopped to dust.

If you make one whole big batch, you can freeze it, with this caveat: put it in a zip-close bag with all the air squeezed out. Then put that in another zip-close bag with all the air squeezed out. Olive oil and black walnuts are magnets for the strange flavors found in freezers. Freeze it in portions you’re likely to use at a meal – I usually freeze about a cup per double bag. It’ll last until spring. Well, it could, but it won’t, because you will have devoured it before then.