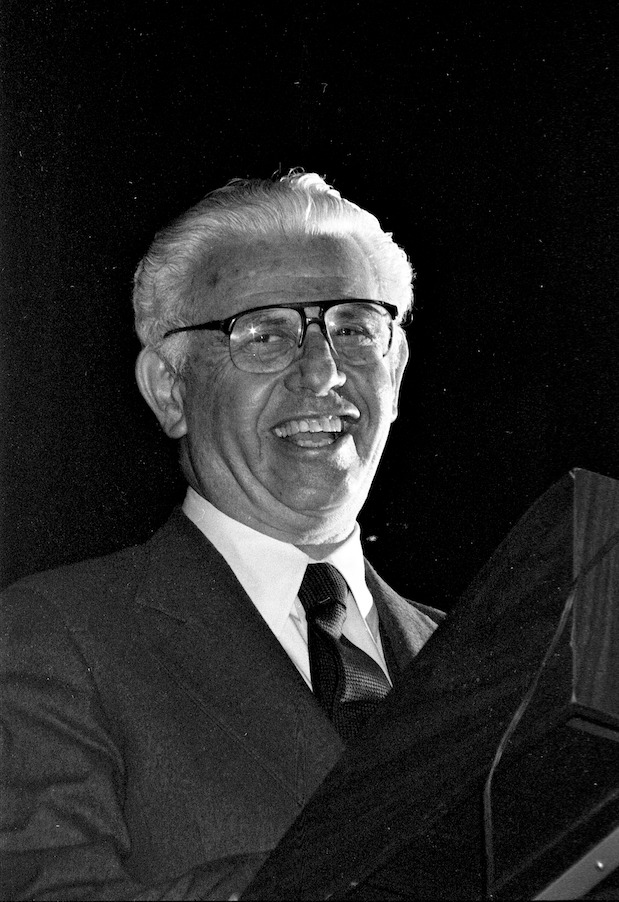 In the space of five years in the 1960s, Arthur Goldberg was Labor Secretary, Supreme Court Associate Justice, and U.N. Ambassador. Art by Dennis E. Powell.

In the space of five years in the 1960s, Arthur Goldberg was Labor Secretary, Supreme Court Associate Justice, and U.N. Ambassador. Art by Dennis E. Powell.

It is said – there’s debate whether it’s true – that upon his retirement President Eisenhower was asked if he had made any mistakes while in office. “Two,” he is said to have replied, “and they’re both on the Supreme Court.”

One of the two, Chief Justice Earl Warren, was the subject of billboards you would see when driving through the South. “Impeach Earl Warren!” they said, next to a portrait of the former California governor.

The Supreme Court has been the source and subject of consternation and controversy ever since 1803, when in a case called Marbury v. Madison the court decided that it had the power to strike down laws that in its view were at odds with the Constitution of the United States. Marbury v. Madison didn’t claim that the Constitution meant whatever the Court imagined it meant – that would come later.

That decision codified the tension among the three branches of the federal government: the President nominates justices to the Supreme Court and the other federal courts. The Senate, under the “Appointments” clause (Article II, Section 2, Clause 2 of the Constitution) confirms or rejects them. The Court had power over the legislation passed by the two houses of Congress and signed into law by the President, while the Senate had the power to remove judges, who otherwise served for life so as to avoid political pressure.

(Senators were originally chosen by state legislatures, not by popular vote as with the House of Representatives. It was not until the 17th Amendment was ratified in 1913 that the Senate was elected by popular vote. The original idea – a good one in my estimation – was that the states would choose their senators and the people would choose their congressional representatives.)

The balance worked well following Marbury v. Madison, with some exceptions. During the Civil War, Abraham Lincoln suspended the writ of habeas corpus. That drew the ire of Chief Justice Roger Taney, already at odds with the President, who had campaigned against the power of the high court’s decisions, particularly the 1857 Dred Scott case, in which Taney, writing for the majority, held that the Constitution didn’t apply to black people because black people couldn’t be citizens.

In his first inaugural address Lincoln said, “The candid citizen must confess that if the policy of the Government upon vital questions affecting the whole people is to be irrevocably fixed by decisions of the Supreme Court . . . the people will have ceased to be their own rulers . . .” During his single term, Lincoln would put five justices on the Supreme Court.

There have been efforts to give the Executive branch – the President – more power, as in the Judicial Procedures Reform Bill of 1937. The Supreme Court had ruled against some of Franklin D. Roosevelt’s New Deal policies, so Roosevelt sought to add more justices, to swing the majority to rule in favor of Roosevelt. The effort failed spectacularly.

Justices tend to surprise even the Presidents who nominated them. David Souter was chosen by President George H. W. Bush to replace William Brennan, Eisenhower’s other mistake; it did not take long to learn that Souter would side with the liberals on the Court. And current Chief Justice John Roberts, nominated by Bush the younger, has demonstrated not a conservative approach but a judicial philosophy of going along to get along.

Court nominations have sometimes been unashamedly political. For instance, Arthur Goldberg was sort of the Democrats’ utility infielder in the 1960s. He was appointed Secretary of Labor by John F. Kennedy in 1961; a year and a half later he was nominated by Kennedy to be an associate justice of the Supreme Court, a position he would resign three years later to become Lyndon Johnson’s ambassador to the United Nations.

In the 1960s, Supreme Court nominations started to be – what’s the word? – kind of flaky as a regular thing. Johnson had gotten his lawyer, Abe Fortas, onto the Court in 1965, but when the President sought to have him made Chief Justice three years later, ethics issues arose that not only kept him from getting the promotion but ultimately caused him to resign entirely. But wait – there’s more!

Richard Nixon nominated Clement Haynsworth to fill the seat formerly occupied by Fortas. That nomination failed for reasons real, imagined, and political. Nixon then nominated G. Harrold Carswell, who was charged by some senators with being a mediocre southerner and was rejected at a result. He is primarily remembered for the stirring defense mounted in his behalf by Nebraska Republican Sen. Roman Hruska: “Even if he were mediocre, there are a lot of mediocre judges and people and lawyers. They are entitled to a little representation, aren't they, and a little chance?”

A perhaps exasperated Nixon then nominated Harry Blackmun, who would turn out to be scorchingly liberal and who would go on to write the majority opinion in a little something called Roe v. Wade.

You will not find a reputable judge, no matter his or her judicial philosophy or view of abortion, who thinks that Roe v. Wade was well decided. Indeed, the late Ruth Bader Ginsberg thought the decision was a poor one. “The unelected judges decided this question for the country,” she said in 2013, “and never mind that the issue was in flux in the state legislatures.”

That decision has overshadowed the court more in the almost 48 years since it was handed down than just about any Supreme Court decision, ever. It has led Supreme Court confirmations to become first-order clown shows. It has led people to think that the Democratic party’s first and only principle is abortion for all.

This is because the elected politicians have come to rely on the courts to establish as law the things upon which the elected officials are themselves too cowardly to properly legislate. If the legislators were so desperate to assure that abortion were legal in every instance, they could pass a law making it so. But they’re too cowardly to do that. And the cases that matter to them most are the ones on the creakiest foundations, such as Roe and the Affordable Care Act a/k/a Obamacare.

One final fact here. For much of our country’s history there were no hearings for Supreme Court justices at all, just a senate vote. But that all changed in 1916 with the nomination of Louis Brandeis. Hearings were held then because senators hoped to find a way to avoid confirming the court’s first Jew.