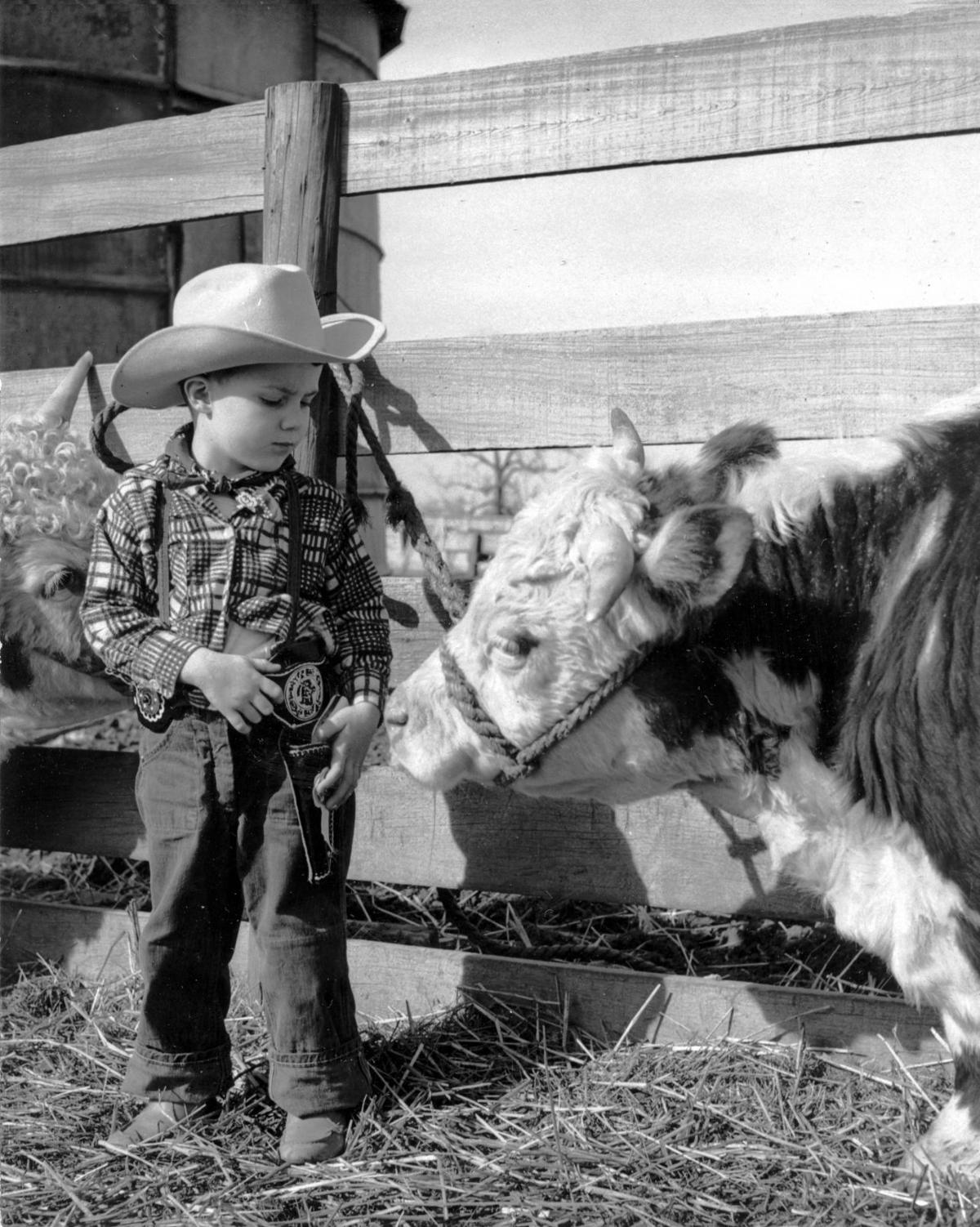 This picture is from about the time Red Foley visited us. I was hard at work – really. This is from a photo shoot for a slick and shiny, now-gone magazine. I peaked early. 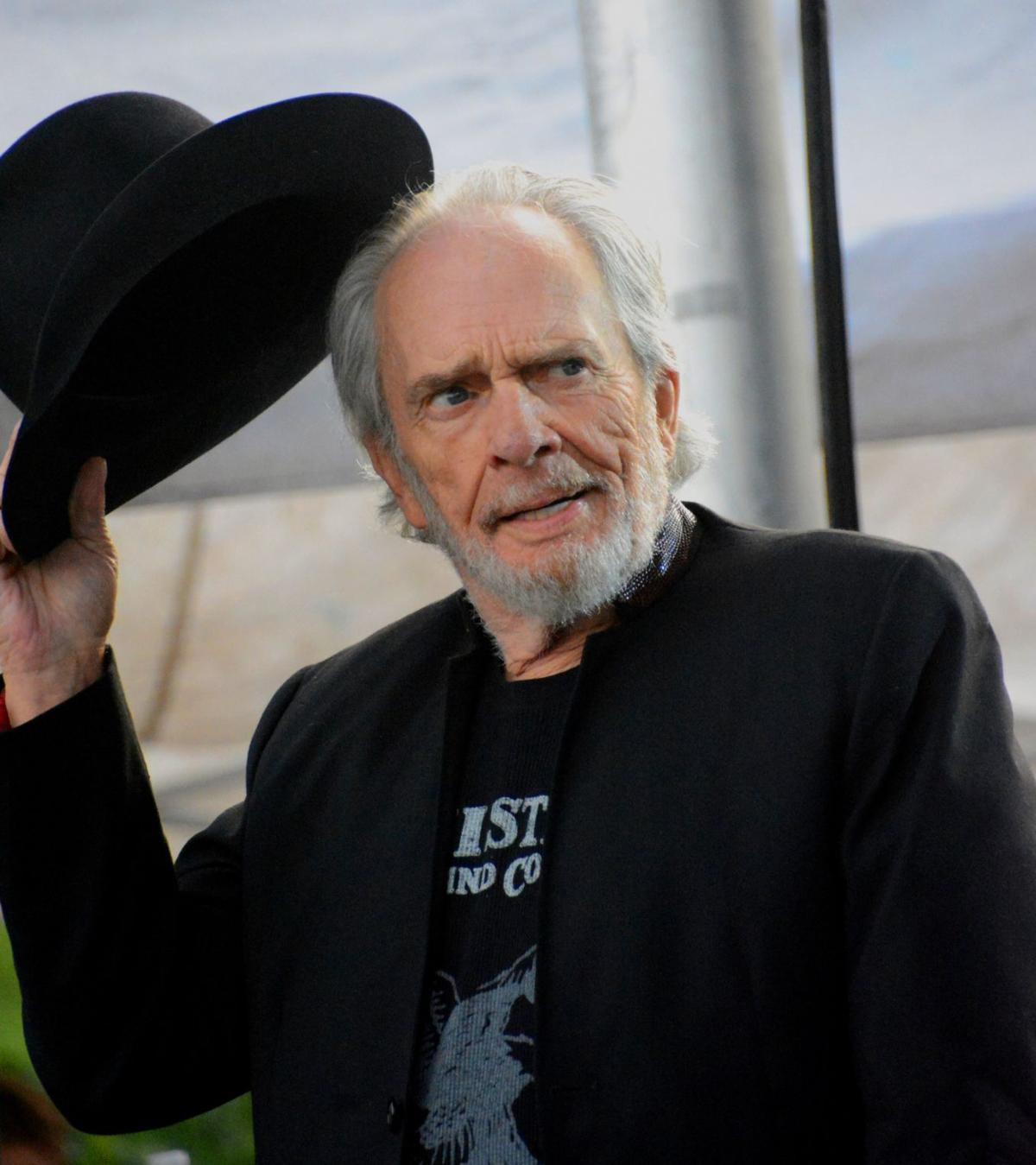 California country hit its local peak with a performance by Merle Haggard at the 2015 Nelsonville Music Festival, less than a year before Haggard's death.

This picture is from about the time Red Foley visited us. I was hard at work – really. This is from a photo shoot for a slick and shiny, now-gone magazine. I peaked early.

California country hit its local peak with a performance by Merle Haggard at the 2015 Nelsonville Music Festival, less than a year before Haggard's death.

Then there was the time Red Foley came to our house for supper.

I don’t remember much about it. I was 4 years old at the time. Until recently, I hadn’t thought of it for decades. What’s more, at age 4 I wasn’t having my first encounter with a famous person.

Red Foley’s visit was nowhere near as satisfying. He didn’t bring ice cream sandwiches. He also wasn’t the person I expected. I was looking forward to his being all dressed up as a hobo. My parents were not especially polite when I was taken aside after I’d voiced my disappointment, and it was explained to me that Red Foley was not Red Skelton. I believed (and believe) that keeping track of multiple people who use the same color as their first name is too much to ask of a child.

I do not know why Red Foley came to our house. He and my dad had known each other from KWTO radio in Springfield, the home of the Ozark Jubilee program of which the popular country singer (“Smoke on the Water,” “Have I Told You Lately That I Love You,” “Peace in the Valley”) was the host (and where, though it’s unlikely it was connected with the visit, Brenda Lee was a star). When my father died, a few months before Foley did, my mom received a nice note from Red Foley.

My dad had known a lot of country music folks from the days before I was born. I remember him crying, and he was not a man who wept easily, when Patsy Cline was killed in a plane crash in 1963.

That was about the time that the principal at my grade school, Norman Knight, for some reason gave me a ticket to a performance that night by a guy named Merle Travis. I had no idea who Merle Travis was, but when my mom dropped me off at the National Guard armory that night for the show, I had my ticket and a note from my father, which I dutifully gave to the guy guarding the stage.

A few minutes before intermission, a fellow came over and told me to come with him. I thought I was in trouble, but at intermission was led backstage where I met Merle Travis. He said that I looked like a good boy, and if I worked at it I could play like him someday (wrong on both counts, alas), and to give his greetings to my father. Then the visit was over. It wouldn’t be for another decade that I’d realize that he was the fellow who invented the style of guitar picking that bears his name, involving usually the thumb and index finger, sort of between the strum and full finger-style playing. All I knew at the time was that he was the best guitar player I’d ever heard and now I’d met him.

Best I can tell, my dad knew Merle Travis from Evansville, Indiana, where both spent much of the early-to-mid-1930s. Somewhere near the top of my lengthy list of regrets is that I never asked my dad about these people. I imagine he had stories to tell, but before long he was dead and the tales went untold. They would have been good to know, especially just a few years later when I took my first radio job, at KFAL in Fulton, Missouri, a popular station playing real, old-time country music.

What made all this come to mind was the generally excellent Ken Burns PBS series, “Country Music,” that debuted this fall. I say generally excellent because it carries the whiff of a National Geographic article on the residents of an unknown continent for viewers as distant from the subject as were the viewers of his Civil War series. But that in turn inspired me to look up and watch the touching and funny “Country’s Family Reunion” series, going back 20 years, in which the participants told many of the same stories, even better. “Country’s Family Reunion” is for people who love the music.

(Neither delves much into the thousands of local artists, bands and local and regional festivals and such that are in so many ways the real home of country music. As it is, both series are primarily about the country music business.)

Here’s a sample from the reunion series. Chet Atkins is talking about the day he signed Dottie West to her first recording contract. He went to her house, “and she was mowing the lawn –  or so I’ve read – and I asked her if she’d like to record for RCA.” Everybody broke up laughing, because they’d all had colorful but untrue things written about them.

Many, maybe most, of those who appear in that series are gone now.

Long after KFAL, I was in New York, working from time to time on the periphery of the music industry. I’d occasionally spend time with artists and frequently spend time with people who knew the music industry well. But the most knowledgeable among them wasn’t a patch to people I met when I moved here. Of course, this region, Appalachia, is where country music sprouted.

I remember a half-hour’s conversation with the talented Rob McNurlin devoted entirely to the song “Hillbilly Heaven.” On occasion I’ve tried to discuss some country or bluegrass topic with Myron Hart and instantly I’ve been left in the dust, so comprehensive is his knowledge (and that of his dad, the great musician and mandolin maker Pete Hart, and while we’re at it the unrelated Mimi Hart and her and my friend J.D. Hutchison).

It was my honor to spend much of Merle Haggard’s 2015 Nelsonville Music Festival performance listening with the famous guitar fixer to the stars, Dan Erlewine of Athens, Ohio. When Gibson brought out its special Earl Scruggs autographed Mastertone banjo 35 years ago, the company got most of the parts from Stewart-MacDonald of Athens, Ohio. And don’t get me started about the people such as John Hurlbut that I’ve encountered and in the past worked with at Jorma Kaukonen’s Fur Peace Ranch in Darwin, just across the Meigs County line. I’ve left out some people, whose names I’ll remember as soon as this column hits print.

So it’s with some reluctance that I bring up Red Foley coming over for supper, or getting an ice cream sandwich from little Brenda Lee, or meeting Merle Travis, because hereabouts you’re likely to know people who have done all that and a whole lot more.