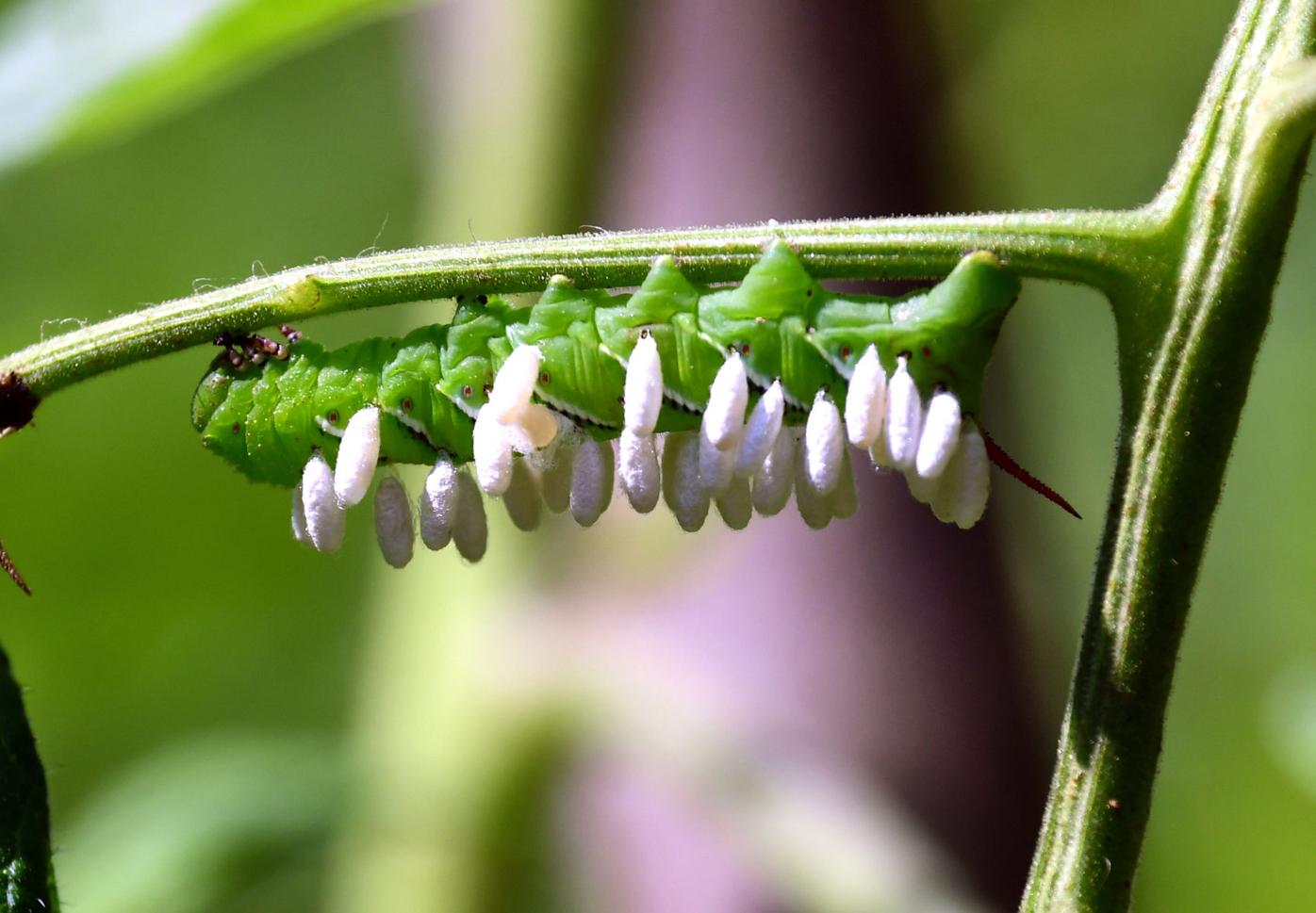 This tomato worm is festooned in the cocoons of a parasitoid wasp. It’s eating tomaties. The wasps are eating it. 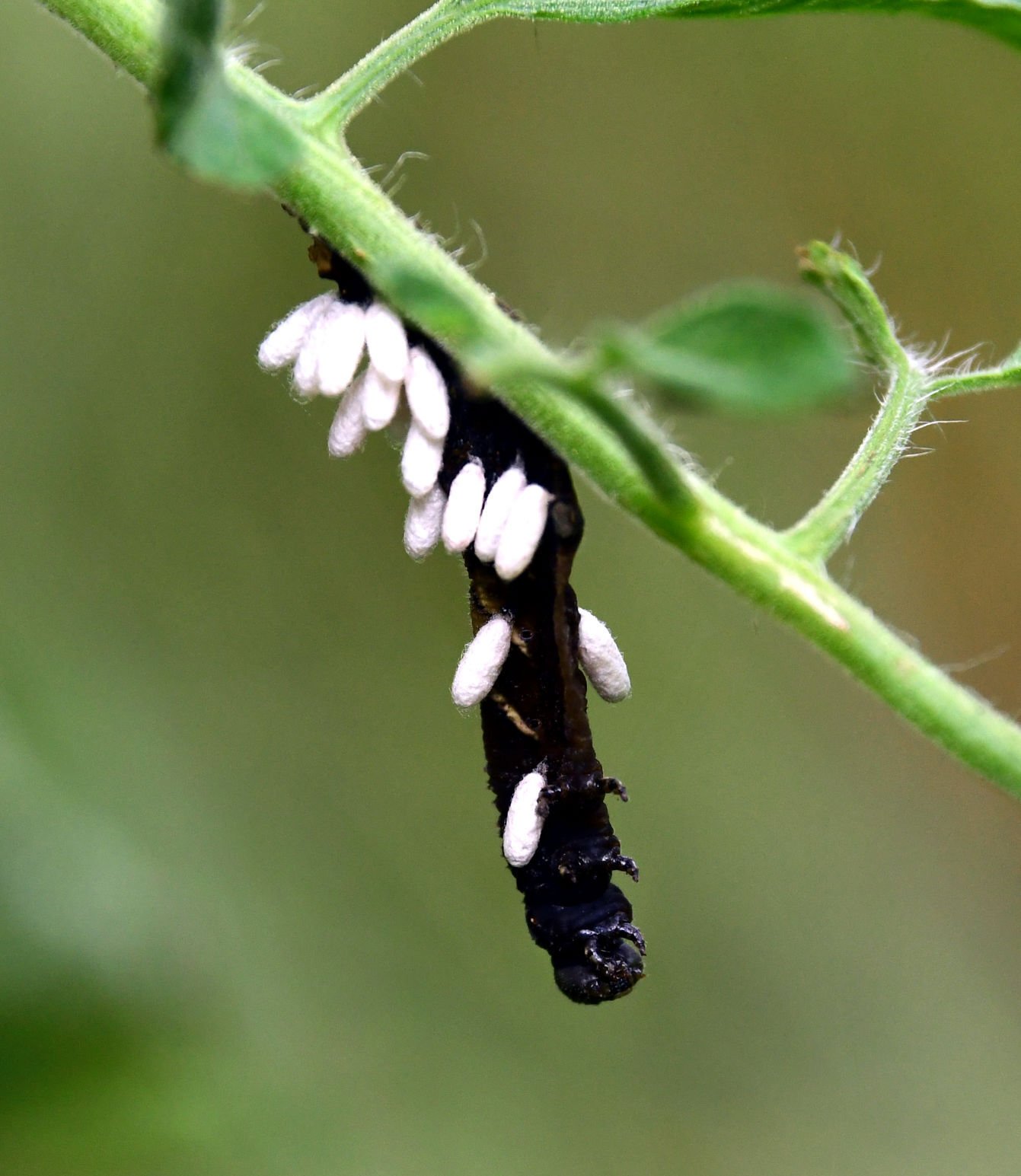 This tomato worm has been sucked dry. It shall never achieve its aspiration of becoming a sphinx moth. Those white cocoons, though, will hatch into tiny wasps. 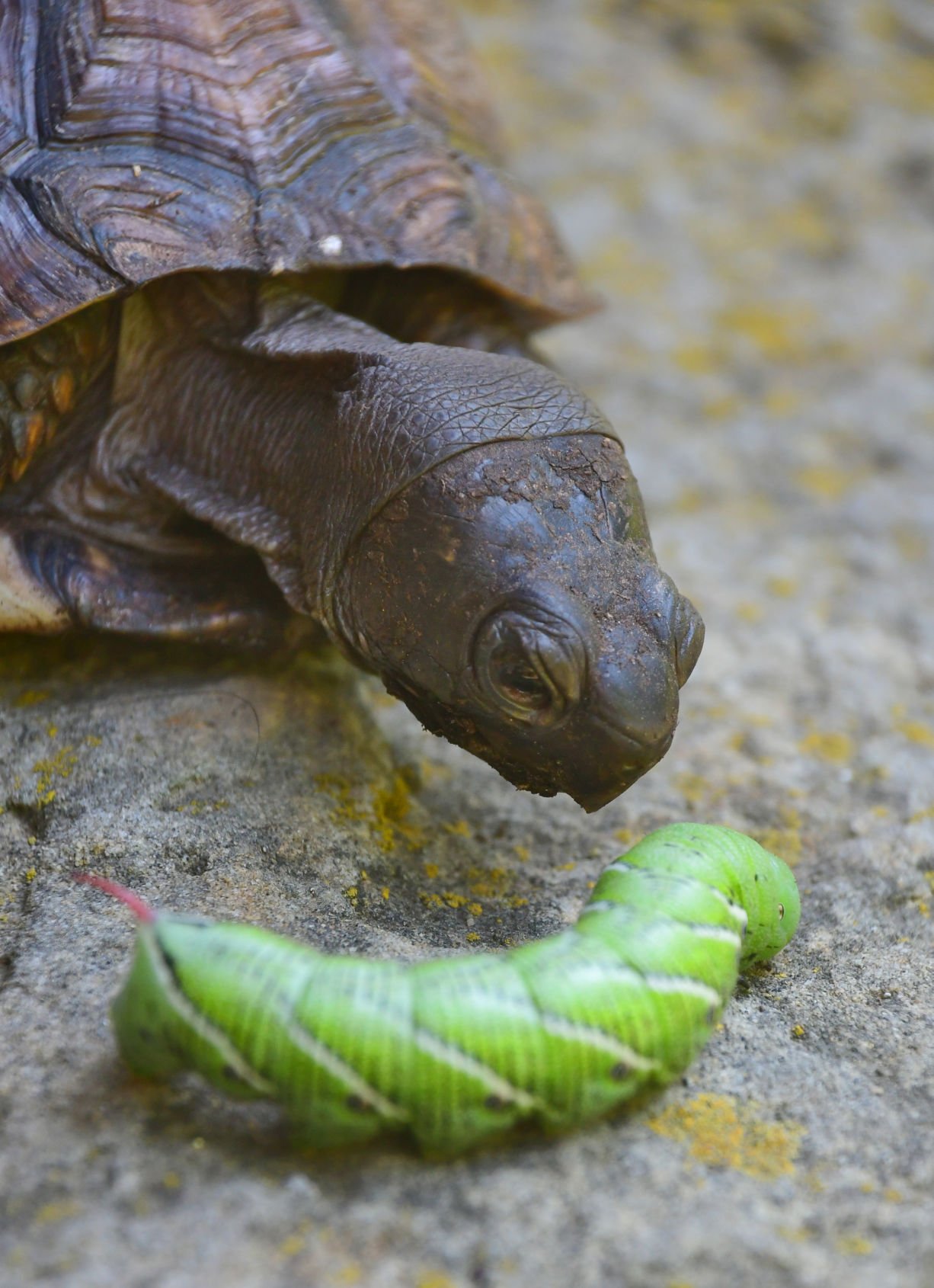 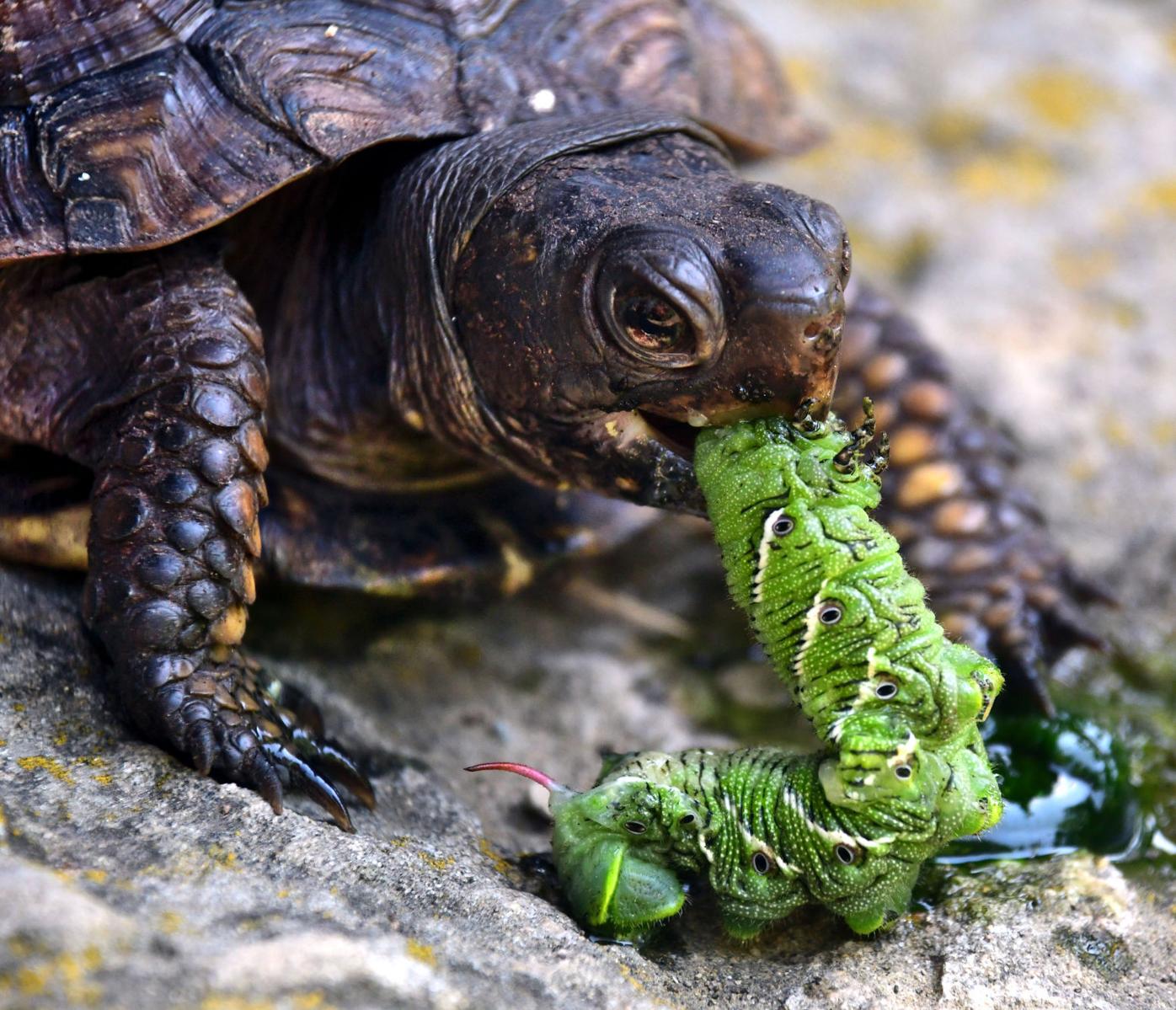 “Wriggle in despair, worm” is what the turtle would say, were it an anime villain. As a mere turtle, it says, “mmmmm, tasty.” 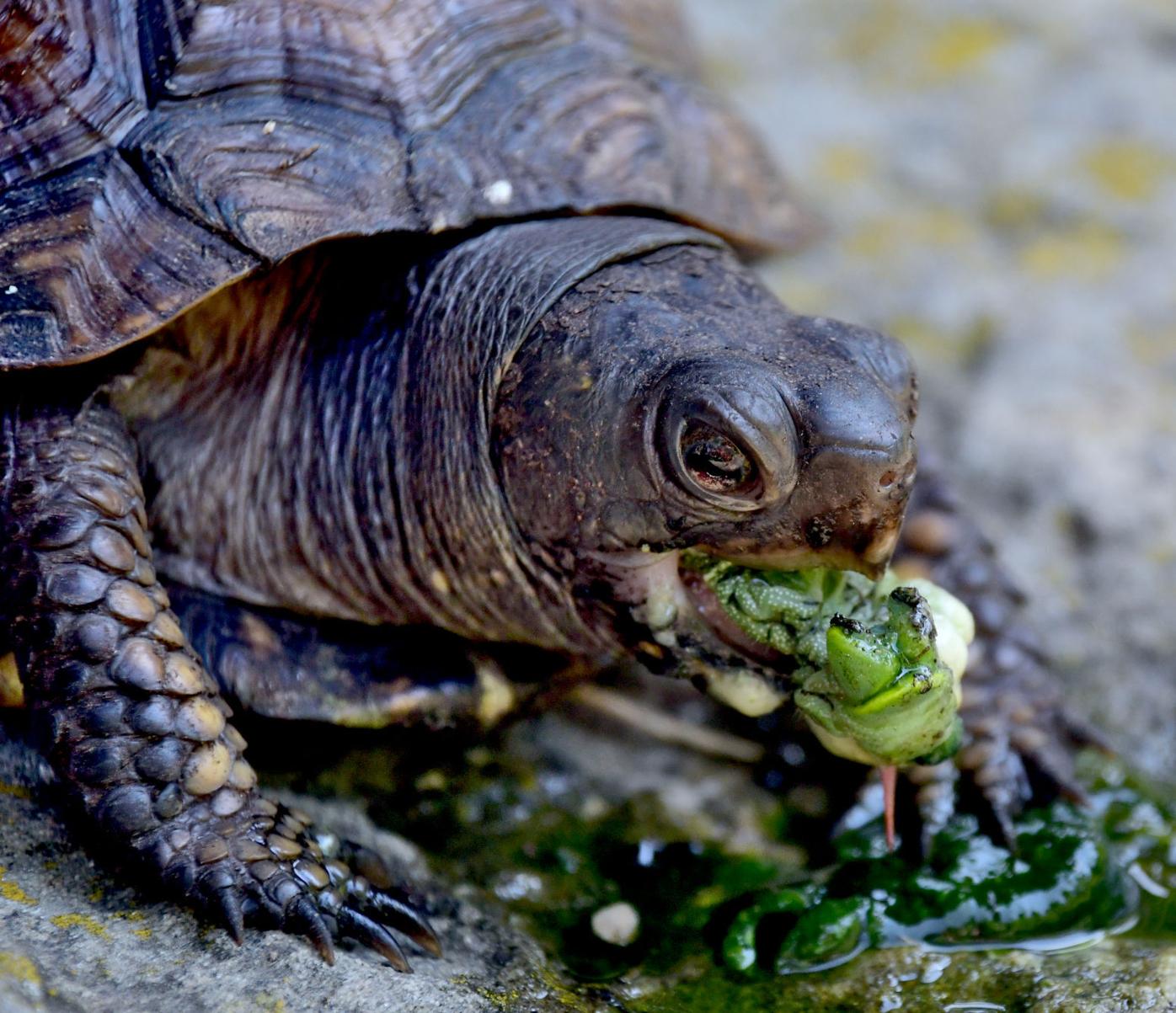 Turtles eat worms the way three-year-olds eat popsicles: when they’re done, there’s as much on the ground as in the belly.

This tomato worm is festooned in the cocoons of a parasitoid wasp. It’s eating tomaties. The wasps are eating it.

This tomato worm has been sucked dry. It shall never achieve its aspiration of becoming a sphinx moth. Those white cocoons, though, will hatch into tiny wasps.

“Wriggle in despair, worm” is what the turtle would say, were it an anime villain. As a mere turtle, it says, “mmmmm, tasty.”

Turtles eat worms the way three-year-olds eat popsicles: when they’re done, there’s as much on the ground as in the belly.

There sits on my desk a little tchotchke, my share of the booty from my friend John Halley’s office Christmas distribution a few years ago. It is a stone with a spring glued to it and at the other end of the spring a small sign that says, “Most experiments don’t work.”

The sign is true in a way, but false in another way. True, most experiments don’t produce the hoped-for result. But they still provide something important. Knowing what doesn’t work is useful, too.

The experimental part is this: the seed I used was from packets that are labeled as being especially prepared for the 2007 growing season.

Tomatoes being a summer staple around here, you might think that I was taking quite a gamble, but I wasn’t, really. There were always store-bought plants available if my elderly seeds failed to sprout. Which some of them did. About two-thirds, in fact.

I planted three different varieties, three seeds each, in peat pots with potting soil. The varieties were some kind of beefsteak tomato (it’s cool and less messy to make sandwiches from tomatoes so big the tomato slab sticks out on all sides, though beefsteaks don’t always have the most intense flavor), and two kinds from my childhood, when tomatoes were the best: Burpee’s Big Boy hybrid and Burpee’s Jubilee.

The former is in my view the best of the Platonic ideal of tomato qua tomato. When you think of a tomato, it’s a nice, round, red Burpee’s Big Boy that comes to mind. Jubilee, on the other hand, is the tomato I would choose if I could have only one variety for the rest of my earthly days. (I believe it is served in Heaven.) It is school-bus yellow when ripe. It is very fleshy, with minimal seed pockets. It’s not as acidic as other tomatoes, but is never bland. There is not – cannot be – a better tomato.

One third of the seeds I planted sprouted and grew. None of the Big Boys did. One of the beefsteak variety sent up leaves and stem. Two of my beloved Jubilees grew.

Three tomato plants are just right for me. I usually grow more and regret it, because I get overwhelmed by tomatoes just as everyone else it, too. I can eat a lot of tomatoes, but not the production of a half dozen or more healthy plants. With three plants I can have fresh tomatoes with every meal and just enough left over to throw into stuff I’m cooking.

I’d taken a few years off from growing tomatoes because of the awful tomato blight that swept the area several years ago. There was and still is a kind of flower rot that surprises you with black tomato chasms inside when you slice an externally perfect-looking fruit, but I’ve not encountered it much this year. There may be ways to prevent it, but in my case it was luck and maybe clement weather.

Which isn’t to say that there were no problems. Where there are tomatoes, there are tomato worms (“tomato horn worms” to those whom they haven’t met), the larvae of a variety of sphinx moth. Some people spray to be rid of them, but I do not do that. I rely on nature.

Most of the tomato worms I saw this year were happily – the happiness was mine, not theirs – clad in the little white cocoons that signify the presence of parasitoid wasps. They consume the worm as it waddles along, slowly draining it of its life force and producing dozens of new little wasps. Tomato worms thusly adorned should be left alone, because the wasps are highly beneficial – they eat tomato worms.

The ones not serving as housing for wasp larvae had something else to consider, in the form of a friendly neighborhood box turtle. Tomato worms are the box turtle’s second-favorite food (nothing beats a slug if you’re a member of the Terrapene genus), and I watched and photographed one as it discovered and consumed a fat green tomato invader. It was like Dio’s taunt to JoJo and Speedwagon: “Wriggle in despair, worm!”

But you can get a sense of all of this from the pictures, of which there are probably more in the web edition of this column. If you’re a gardener they will make you smile.

Now I’m off to apply for grants so I can do more experiments.