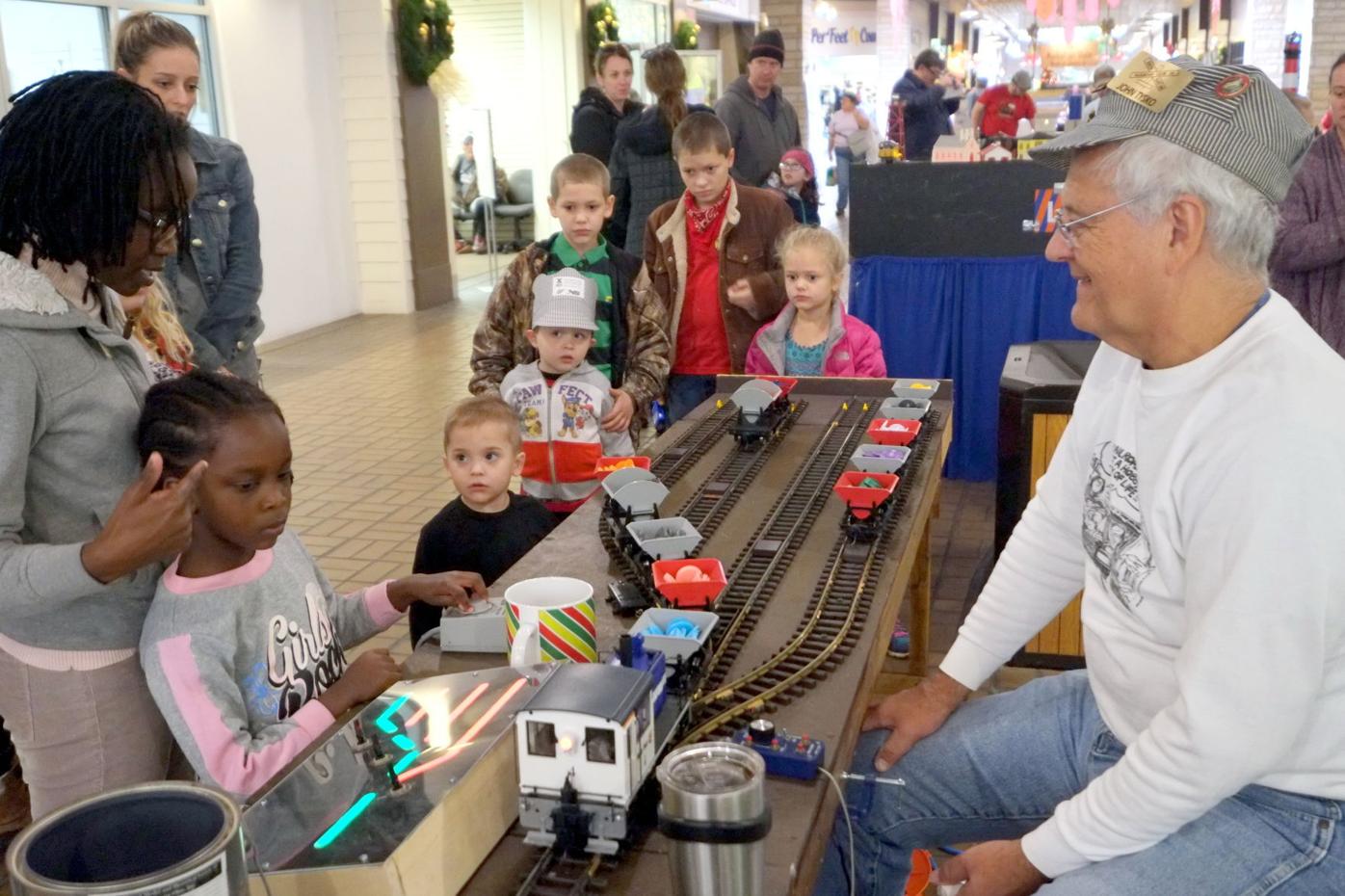 At the Market on State, Christmas 2017, kids loved working the model switch engine themselves, sorting the cars onto different tracks. Photo by Dennis E. Powell. 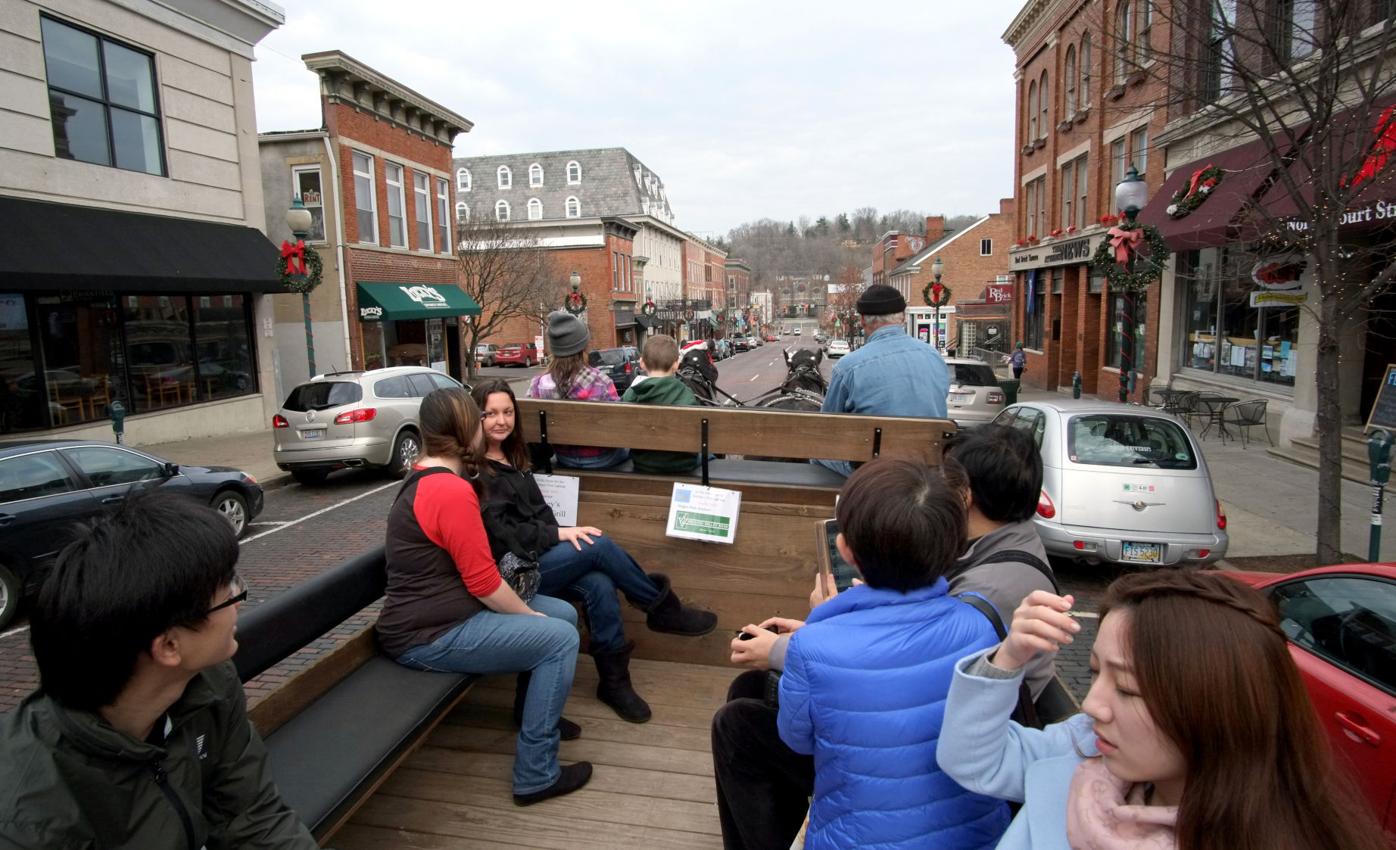 Riding a horse-drawn wagon around Uptown Athens is a holiday treat. Little kids get to sit up front with the driver. Photo by Dennis E. Powell. 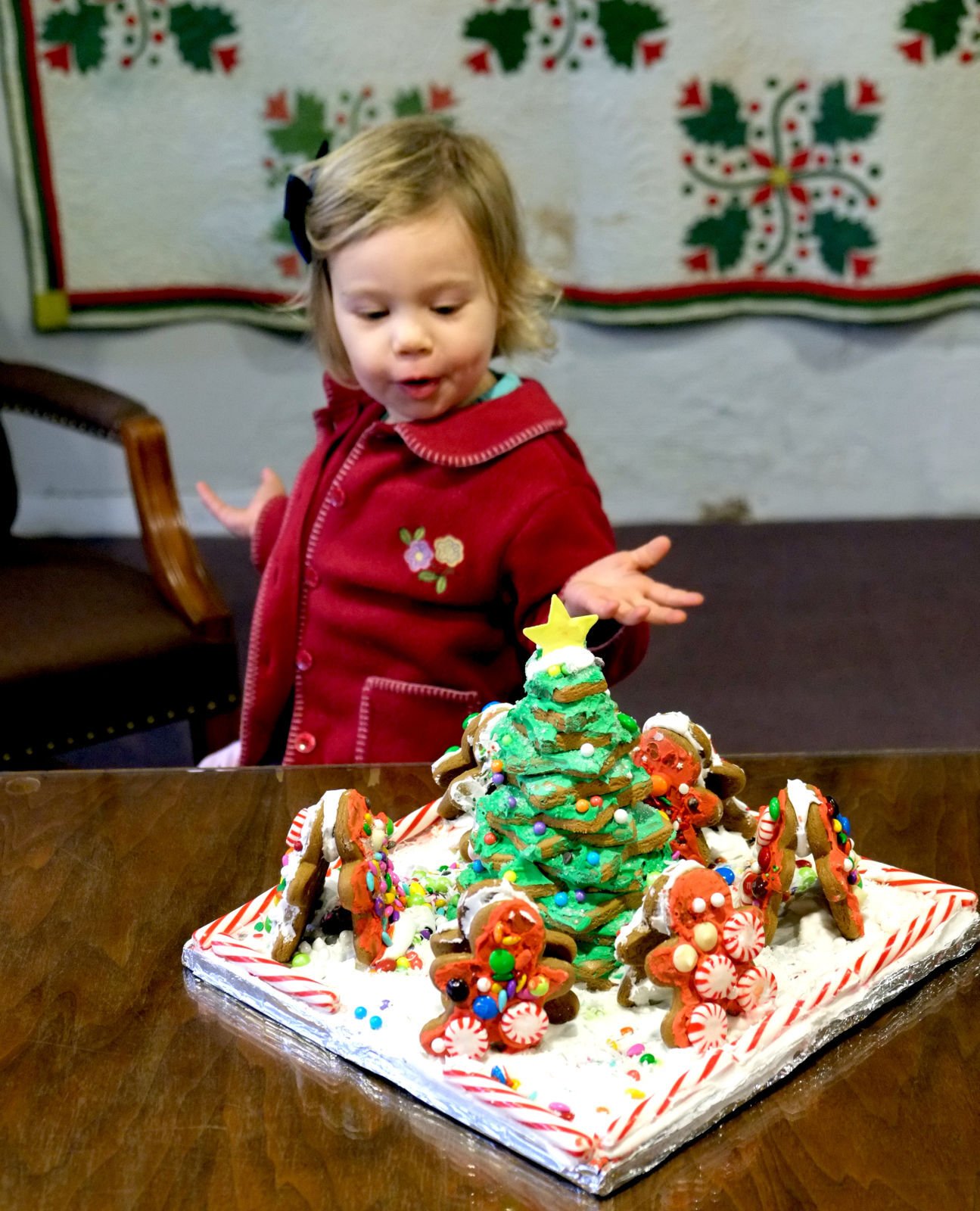 It’s a gingerbread tree, not a gingerbread house, but for this discerning young judge at the historical society contest, that made little difference. Photo by Dennis E. Powell. 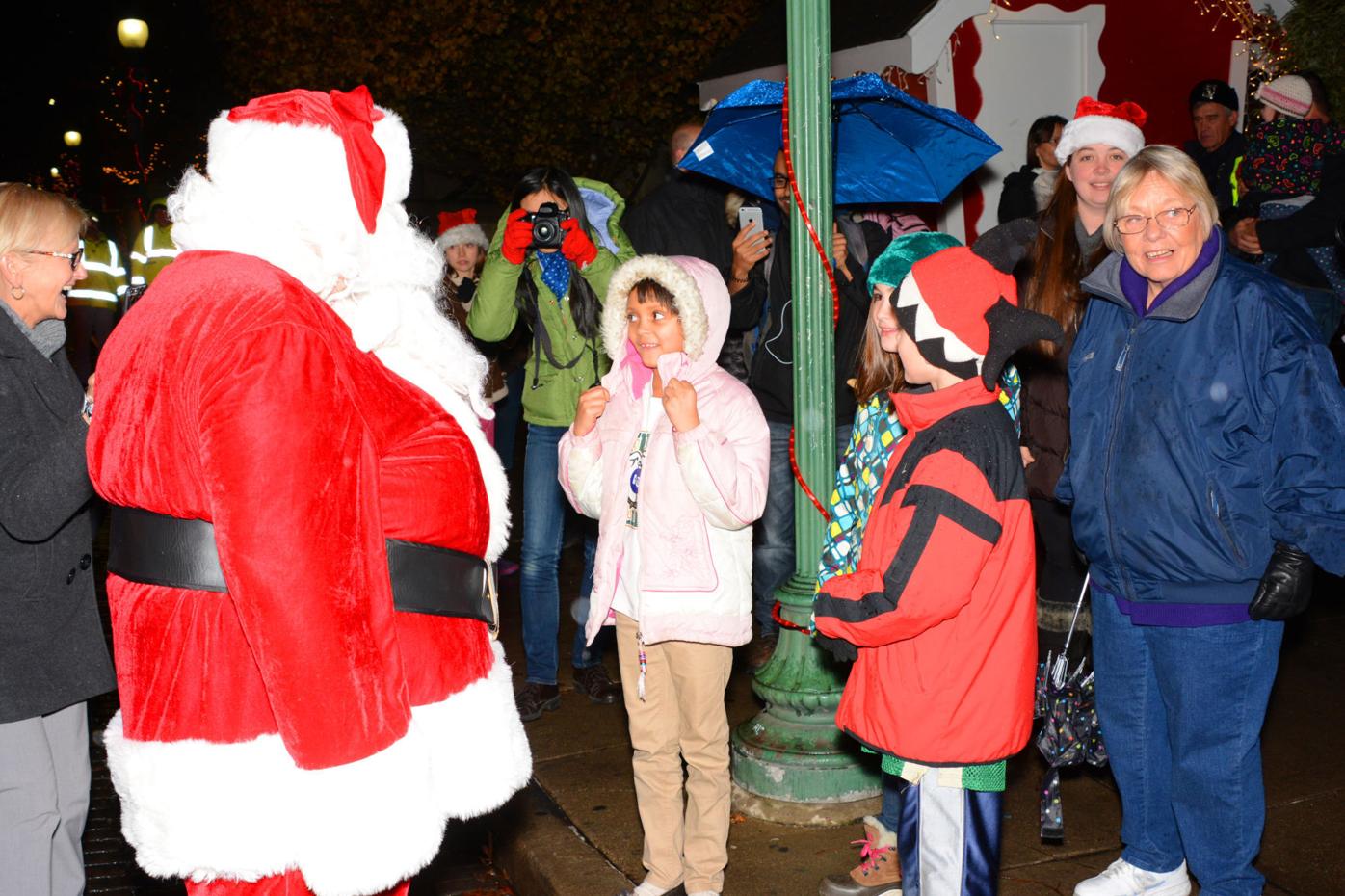 The arrival of Santa Claus is a matter of excitement for families with children. This was the scene six years ago. 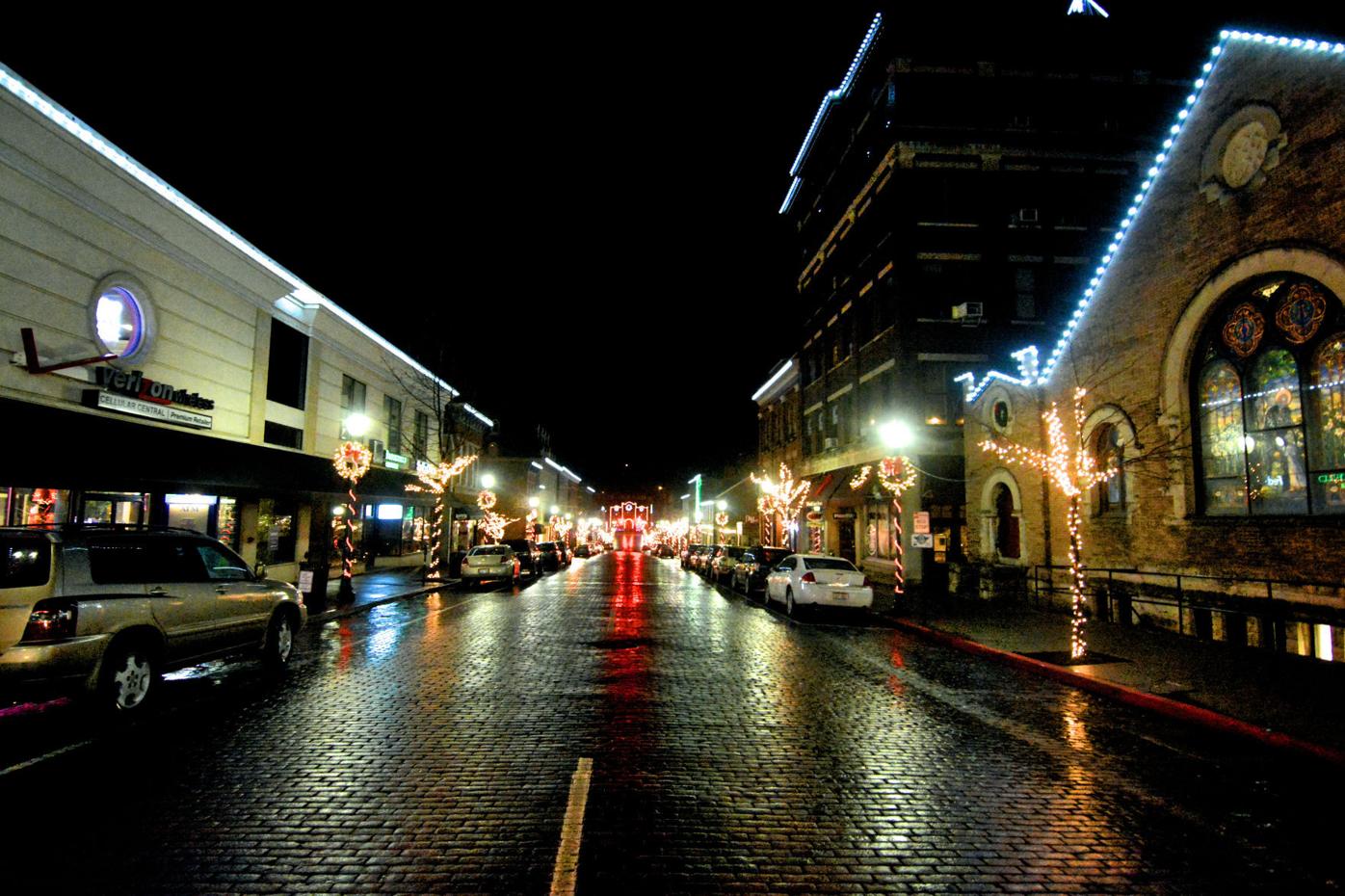 Rainy uptown Christmas Eve 2014. There were people in church, but no one was strolling on Court Street.

At the Market on State, Christmas 2017, kids loved working the model switch engine themselves, sorting the cars onto different tracks. Photo by Dennis E. Powell.

Riding a horse-drawn wagon around Uptown Athens is a holiday treat. Little kids get to sit up front with the driver. Photo by Dennis E. Powell.

It’s a gingerbread tree, not a gingerbread house, but for this discerning young judge at the historical society contest, that made little difference. Photo by Dennis E. Powell.

The arrival of Santa Claus is a matter of excitement for families with children. This was the scene six years ago.

Rainy uptown Christmas Eve 2014. There were people in church, but no one was strolling on Court Street.

You don’t need me to tell you that this has been an unusual year and that we’ve all done things we wouldn’t normally have done, and those things we used to do we now often do differently. We might wonder which changes are temporary and which ones are permanent.

We’ve been at home more. Maybe — probably — we watched more television. We ate, to our regret, more than we might have in other times. Perhaps we spent our time profitably, by reading more or gaining some new skill. Though I cannot say it was profitably spent time, I learned more than I would have imagined about anime, the Japanese cartoons that are sometimes remarkable works of art.

There are things I’m missing this season. While this time of year is usually a bit wistful, even sentimental, that’s all amplified now. One of the sweetest traditions here, in all senses of the word, has been the annual gingerbread house competition held by the Athens County Historical Society (now the Southeast Ohio History Center). I remember the excitement as the entrants brought in their creations, some of which were unbelievably intricate, but even the simpler efforts were admirable and appreciated. I remember the appearance of those lovely, almost-edible (they had to be covered with varnish or something to preserve them) structures in Uptown storefront windows.

I miss the clop-clop-clop of the draft horses that pulled a wagon carrying people. It provided the beat as store owners talked about how the last thing the place needed was some event that made the lack of parking even more of a problem.

I miss the tension that accompanied the annual evening when Santa Claus arrived in Athens and, nearby, children would line up to get their picture taken sitting on his lap. I know a bit about this because for a number of years I was the photographer. It always seemed as if it would be a disaster: the festivities were usually late in getting started; Santa would spend more time with each child than strict efficiency demanded; the system for getting the pictures to the families was never quite perfected (though it always seemed good enough); there were a few hours of frenzy and then, in a Christmas miracle, it was over.

Allow me the liberty of describing this a bit more, because the people involved never did get the credit they deserved. I would make pictures of 25 or so kids, then swap the SD cards in my camera so that a runner hired especially for the task could take the cards containing the precious images across the street and up the stairs to the Athens NEWS offices. There, the skilled people who normally put together ads and special sections would apply a special, festive border to the pictures, so that it would look as if the child on Santa’s lap was the front-page story in a special edition of the paper. Then the picture was sent on to the printer and, far quicker than anyone had right to expect, the pictures would appear for distribution. Sometimes they had to be picked up at the office, while sometimes they were carried back across the street to be claimed by the (ever larger, ever louder) crowd.

It was crazy. It was a joy.

I miss being irritated by the weirdness of the “Christmas” music blaring scratchily from speakers mounted up and down Court Street, that nevertheless added to the excitement and served as a reminder that this time was special.

I miss, as this year I miss Court Street in general, the crowds that would come out, maybe to shop but often as not just to say hello. There are a lot of people you run into only at Christmas time, and this year I miss them, too. I miss the displays of model train sets that were set up at the Market on State Street and at that over-the-top model train museum in Shade.

I’ll miss what to me has become an annual tradition, walking through Athens late on Christmas Eve, when most everyone was safe and warm at home and the normally busy streets were now silent or close to it. The contrast won’t be as vivid this year, alas.

But I am a photographer, so I my reminiscences are illustrated. And considering that maybe you are missing some of the things I am, I thought I’d add a few pictures this week, as a bit of a Christmas present.

And so that we may remember those things, in the hope that they haven’t ended; instead that one day, maybe next year, they’ll come back.