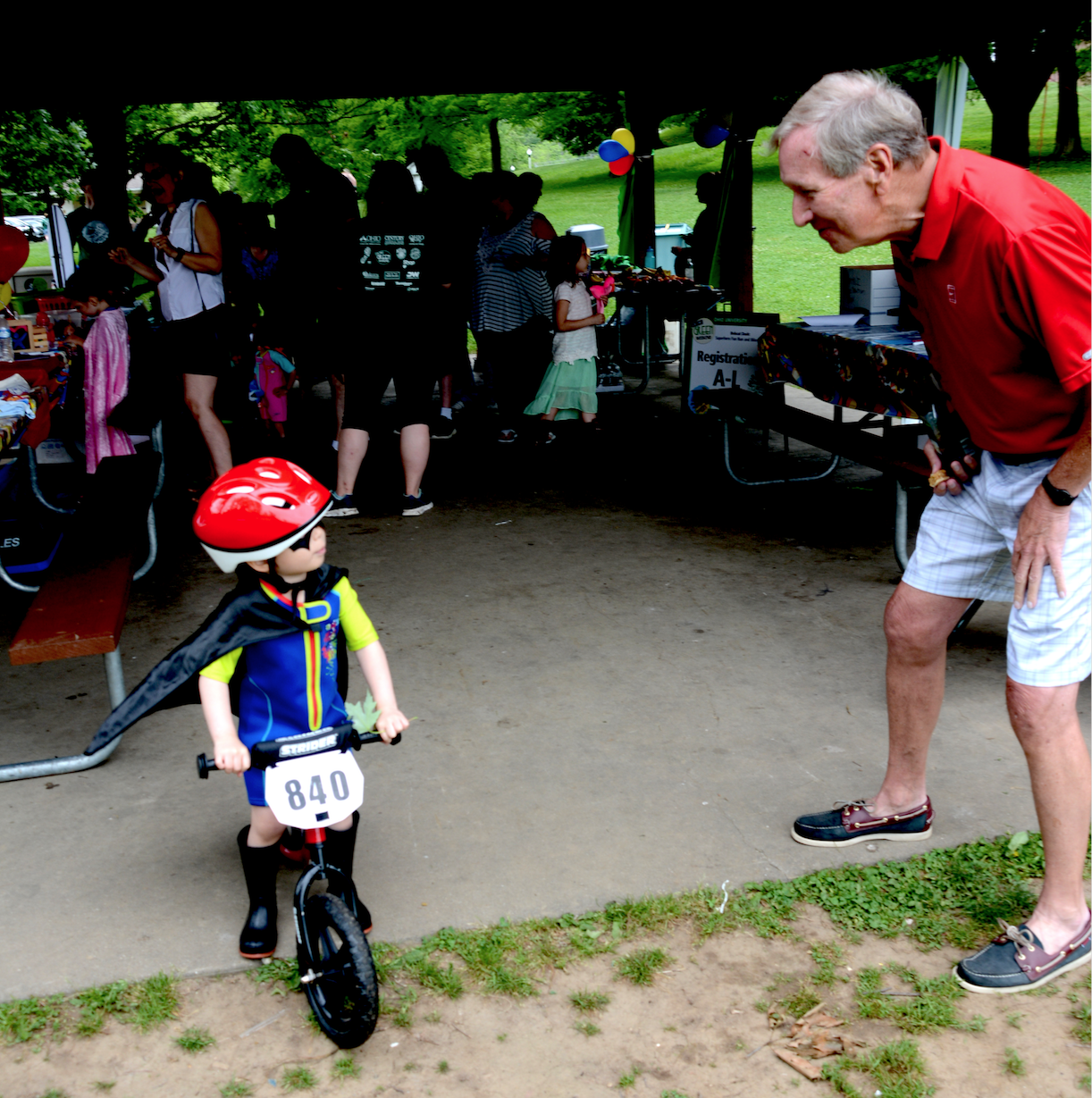 Devoted to the kids in the CASA-GAL organization, Judge Bob Stewart showed up at their annual events. Here, he jokes with a tiny tot at the May 2017 "Superheroes 5K" fun run.

Devoted to the kids in the CASA-GAL organization, Judge Bob Stewart showed up at their annual events. Here, he jokes with a tiny tot at the May 2017 "Superheroes 5K" fun run.

Sometimes when a person dies it can be good to let thoughts calm a bit before trying to write anything about the departed.

That’s true of Judge Robert Stewart, who died Sept. 12, even though in his case I don’t think that the intervening month has very much changed what I have to say about him: There are surely people in the world as naturally good and decent as Bob Stewart, but I doubt the possibility of anyone more so.

You’ve perhaps run into people who in conversation make it clear that they are listening and genuinely care what you have to say. Judge Stewart was such a man, and it wasn’t artifice. That’s an excellent (though I imagine emotionally expensive) skill for someone serving as probate and juvenile judge. The things that kind of judge hears are often heart-wrenching. The situations frequently evade easy solution. A purpose of courts is to make people whole, and that’s not always an easy task.

Though our interactions were not many over the years, he always greeted me as he would an old friend; when he said it was good to see you, you believed him. When he asked how you were, he was interested in the answer. Those things are rare, and in his case they did not depend on who you are, which is even rarer among those who hold elective office.

As seems to have been true of most every aspect of his life, Judge Stewart was not wont to do the minimum required, choosing instead to do as much as he possibly could. He was a tremendous supporter of his court’s CASA-GAL program, which gives a legal voice to children whose interests are otherwise often lost among the adults and the lawyers in judicial proceedings. Even when he was ill or recovering from illness he would show up, friendly and smiling, at the group’s annual “Superhero 5k” run and party and its annual holiday “Reindeer Run.” I remember one such, which took place not long after he’d had knee surgery and probably would have been better off taking it easy.

My first association with Judge Stewart came well over a decade ago, when I was interested in writing something about a case in which he had been peripherally involved. It was still in the system, so it was not ripe for a story, but he agreed that the tale – which could have been dreamt up by Mark Twain – certainly deserved telling. He made sure that I had information that would help me tell it when the time came. (I’m being vague about this because I still intend to do the story and do not want to get scooped.) There was no benefit to him in helping me out, and he had to go to some trouble to do it.

The interaction with the judge that most stands out, and that I’ll remember for a long time, took place in mid-June 2016. I’d had photo assignments in town and had another one later in the day, so there was no point in going home. It was a sunny and hot day, and I had been wandering around, making a picture here and there, saying hello to people on Court Street – in short, it was a typical afternoon in Athens during the Before Times. I also hadn’t, it seems, bothered to stay hydrated.

I’d stopped by my car, in the parking lot where The Athens NEWS had spaces in those days, and as I walked back toward the street I noticed Judge Stewart heading to his car. He was quite thin and his stride was slightly tentative. Those things were unlike him. I thought I’d walk over and say hi.

How was he, I asked. Smiling, he said he was in the final parts of treatment for throat cancer. Smiling, he described a severe illness and what it had put him through. “The hard part,” he said, “is learning to eat and swallow again.” He told me about it without there being any evidence of self pity. I remember thinking that if that kind of thing ever happened to me I wouldn’t be so calm about it. He mentioned that he had suffered a different, itself usually extremely serious, cancer a few years earlier.

We were talking pleasantly when it hit me: My vision was closing in and the world was spinning a little. I quickly sat down on the concrete because otherwise I would have fallen and that might have damaged my cameras. I remember a minute of wondering what was going on and if this was how I was going to die and if it was at least I was in a place convenient for those who would collect my remains. And then it passed and there I was, Bob Stewart standing over me and thrusting toward me a bottle of water.

I was pretty clearly dehydrated, and said so. The judge wasn’t buying it.

So, himself weakened by recent draconian treatment, he walked me up the steep driveway next to the diner, up the hill to the offices of The Athens NEWS, and up the – 23, if memory serves – worn marble steps to the office. He stayed there until he felt confident that I was okay. But he wasn’t done. He demanded my cellular telephone number and gave me his, lest I came to be in need of help.

An hour later I was at College Green, making pictures of a protest that followed the nightclub massacre in Orlando, Florida, June 12. As I was collecting images, my phone rang. It was Bob Stewart, checking to make sure I had recovered and insisting that I check into it further should it happen again.

I told the story in the office a couple of days later, marveling that while we were friendly (as everyone seemed to be with Judge Stewart), we weren’t close friends and he was, after all, himself in less than the best of health, yet he had done all that. Now, more than four years later, it occurs to me that there are probably a lot of people who have similar stories to tell, stories of unexpected, even heroic kindness from Bob Stewart.

I’ve met several very nice people here, a disproportionate number given the time I’ve lived in Athens County compared to the time I’ve spent elsewhere. People here tend to be kinder and more caring than people in other places.

But looking back, I don’t guess I’ve ever met anyone, anywhere, who would top Bob Stewart in sheer selflessness. May he rest in peace and may his memory be a blessing.