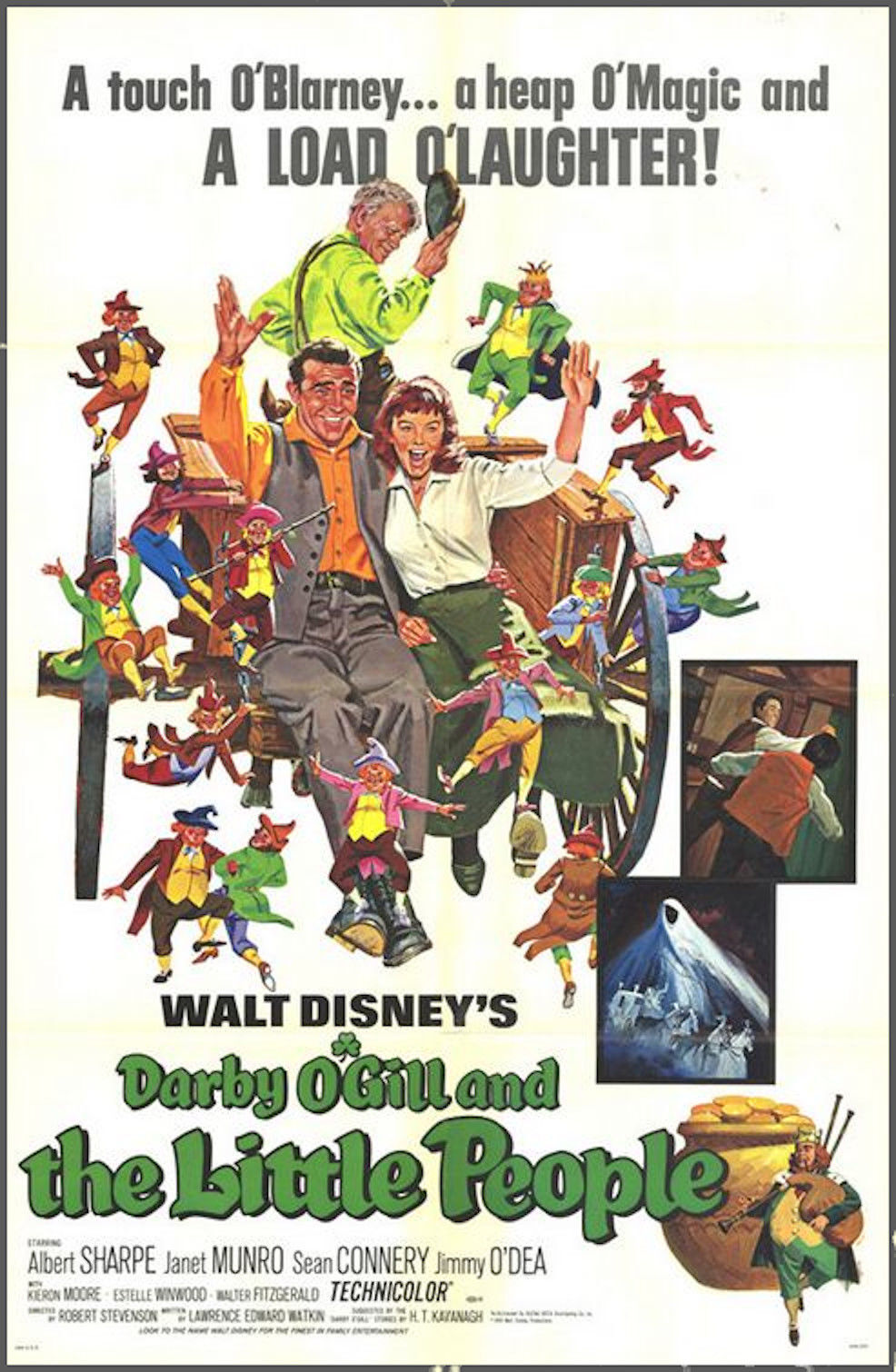 A poster from the 1959 release of "Darby O'Gill and the Little People." That's Sean Connery on the back of the wagon, waving.

A poster from the 1959 release of "Darby O'Gill and the Little People." That's Sean Connery on the back of the wagon, waving.

When I was little and the wind blew at night, I was sure the banshee had come.

There aren’t many people who would think it appropriate that Sean Connery would die at Halloween, but I’m among that few. He played a major character in the most frightening movie of my childhood.

My first exposure to that fine Scottish actor, who died Saturday at 90, was when I was a tiny kid. I was taken to see “Darby O’Gill and the Little People,” a Walt Disney movie made at the height of Disney’s influence in live-action fantasy movies. The studio was doing all kinds of tremendous special effects, without benefit of computers or other modern trickery, many of which hold up even today.

The 1959 “Darby O’Gill” was in my estimation the best of these, but that might be due to its effect on me.

Taken from the “Darby O’Gill” story of Irish author Herminie Templeton Kavanagh, originally published as “Darby O’Gill and the Good People” around the turn of the last century, and set in an Irish village, it revolved around the peculiar relationship between villagers and their local faeries, or as we call them, leprechauns. Sometimes wishes would be granted, sometimes the mortals and the faeries were at war, and sometimes they just got along, though uneasily. Leprechauns were rascals and tricksters, not benevolent supernatural beings here to help us.

The title character was an old fellow, a rascal himself, who was the caretaker of a huge estate. He had, of course, a beautiful daughter who, of course, was named Katie. He was retiring and his replacement was a strapping young gent named Michael McBride.

In the movie, we met Michael McBride as he arrived in the village. He was singling lustily, something about the joys of being an Irish lad, I think. Michael McBride was played by Sean Connery. Let that soak in: Sean Connery singing on screen. He would sing some more later on.

When you are very small and see a fantastic movie, the fine points of plot do not much register. You’re there for the high points, not for the romantic lead’s singing. “Darby O’Gill and the Little People” had many high points.

There was the leprechaun king, Brian Conners, who hoarded gold and who lived with his band in a hole beneath a tree. He and they were tiny. This is an important discovery for a child, that there were grownups so small that you could pick them up. And even better, Conners and his crew rode tiny horses, the size of those plastic model horses popular at the time. Only these were real horses! I made a mental note to ask for one of those for Christmas.

After all, this was a movie, not a cartoon, and right there they were, so they must be real.

But the highest point was also the most terrifying. It was the banshee. It arrived in howls and gusts and as I understood it – I haven’t checked, because I’m not some sort of banshee lawyer – it was the harbinger of death. It was coming for Katie. It summoned, as banshees do, the Dullahan (the original headless horseman) and the Cóiste Bodhar, or death carriage. This was all scary as hell.

The plot, as I took it in from that point onward, diverged considerably from anything in the screenplay or delivered on the screen: Old Darby, seeking to save his daughter, chased away the banshee by going after it with his shillelagh. This item was new to me, but I made a mental note to try to get one, so that I could protect my family from any banshees that might stop by. I didn’t know what one was, but it was apparently a special club of some sort.

And then some more stuff happened, and I think that Sean Connery kissed Katie and sang some more, and then we went home and I was able to begin my planning to keep us safe from Irish demons.

Sean Connery would make some more movies after that, one or more of which you may have seen. He was good in all of them. Well, no, that’s not entirely true. He was the leading player in “Zardoz,” the 1974 film that was for many years the worst movie ever made. (It was knocked from the top spot only recently by the atrocious “The Misty Green Sky,” which will hold the title in perpetuity because it is impossible to make a worse movie.) In it, Sean Connery was clad in a red diaper-like garment. “Zardoz” was so awful that for three days after we saw it my girlfriend Elaine and I were in a depressed daze.

But we can – we must, so that his memory is unsullied – forget “Zardoz” (if only I could!). We should remember “The Hunt for Red October,” “Indiana Jones and the Last Crusade,” and most especially “The Untouchables,” a movie memorable for his Oscar-winning performance as a Chicago cop.

Yes, he was certainly the best of the James Bonds, but that is like saying he built the tallest building in Athens – so what?

I remember one early morning sitting in the newsroom of a radio network in New York, where I was editor, and my anchor wanted to close his next newscast with a story about Sean Connery. The actor’s business manager had stolen $3 million from him, and Connery had taken him to court. The business manager slithered out of it. After the trial, a reporter had asked Connery what he planned to do next. Replied Connery, “I hope to kill him.”

This tickled the anchor. It tickled him too much, as it turned out: as he began to read the story on the air to millions of listeners tuned in to hundreds of radio stations, he began to laugh. The rest of the newscast was his uncontrollable laughter. Seeking to put things right, he carried the story in with him in his next newscast – with the same result.

My anchor was a serious, clear-headed guy. It’s no surprise that it took Sean Connery to bring him down.

And even now, no longer the terrified little boy, I shiver a little when it’s late at night and I hear the wind howl. It might be the banshee. And I still have no shillelagh.