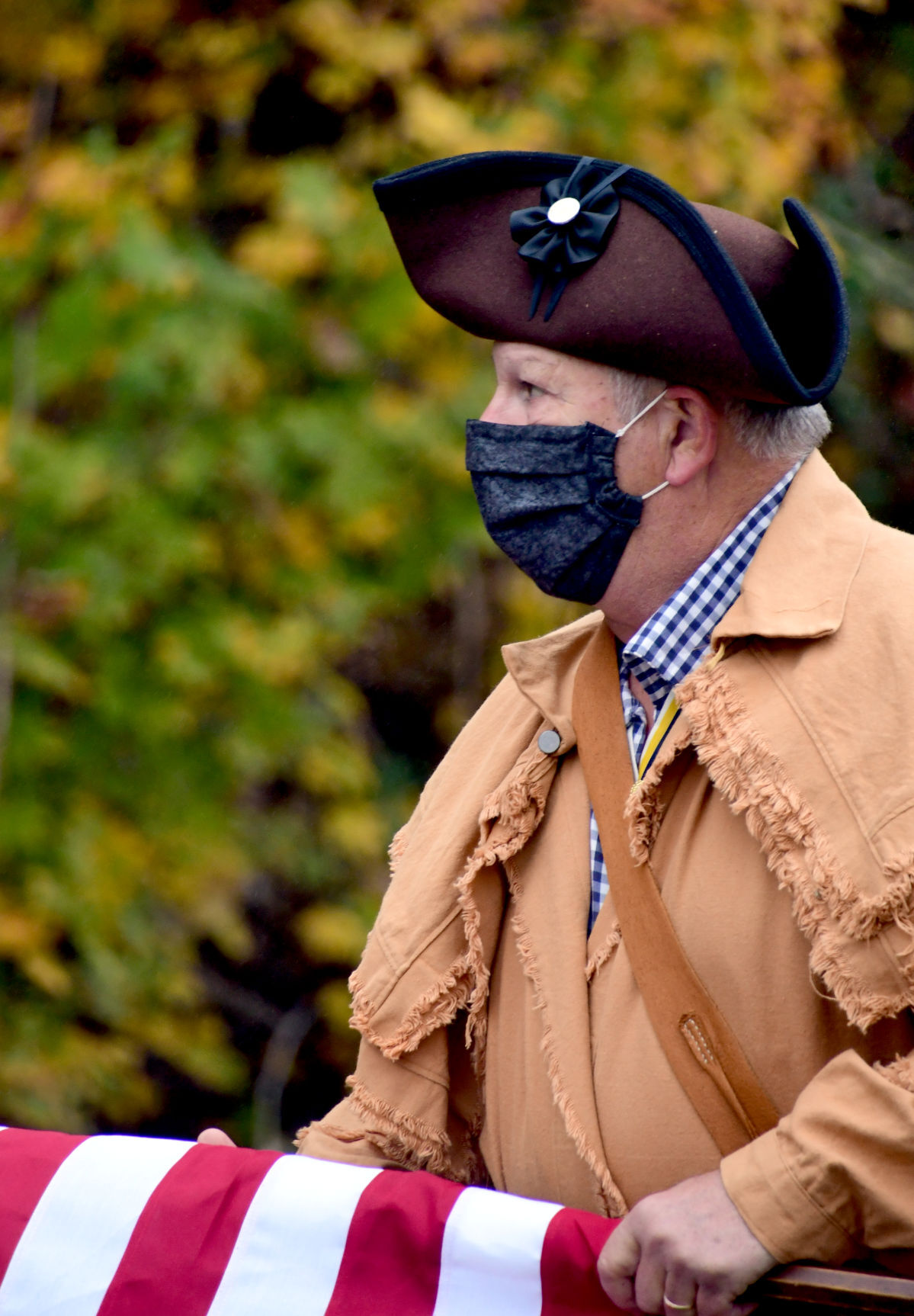 While the costumes at the ceremony Saturday were in period, one difference between 1770 and 2020 is that masks weren't required in 1770. 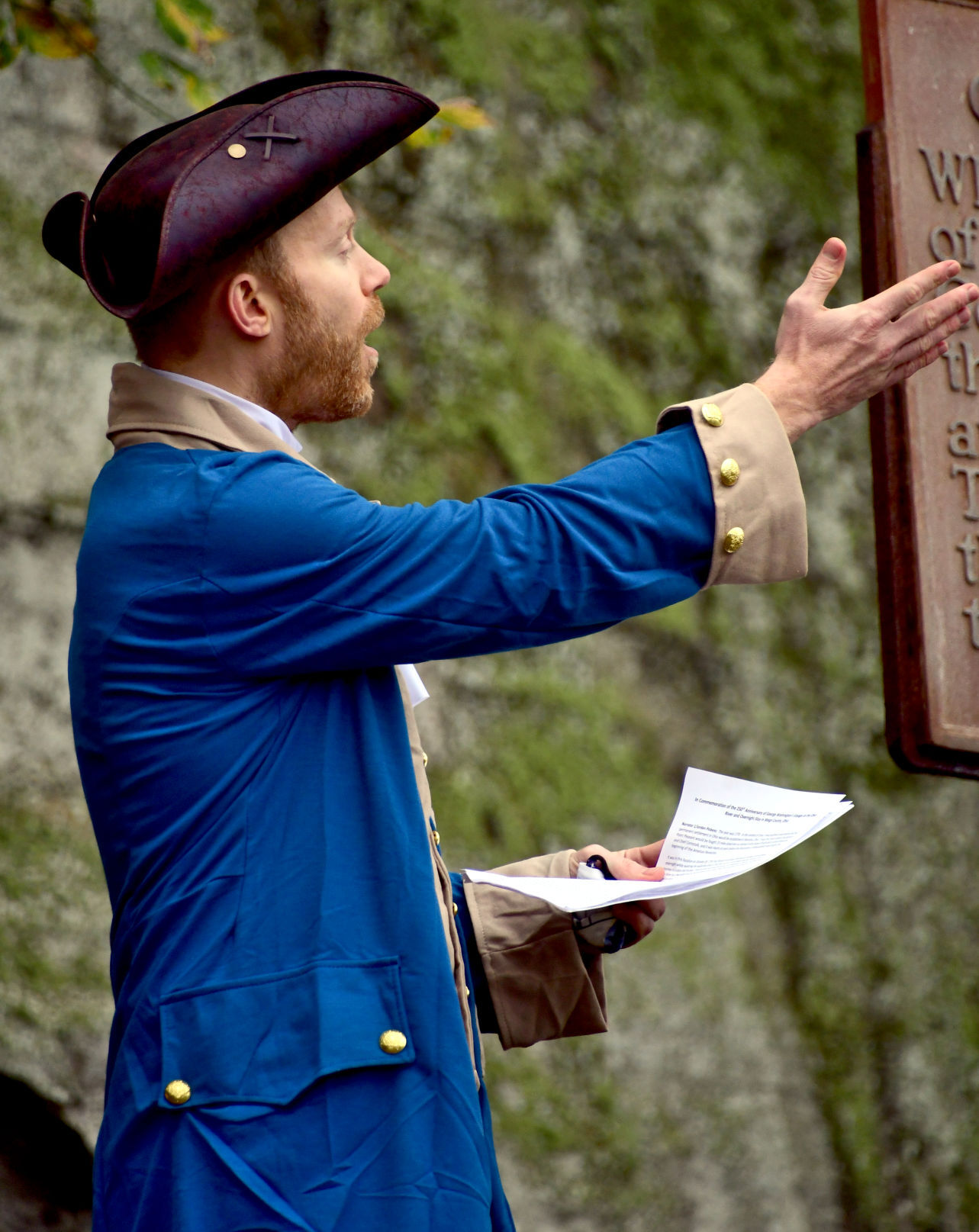 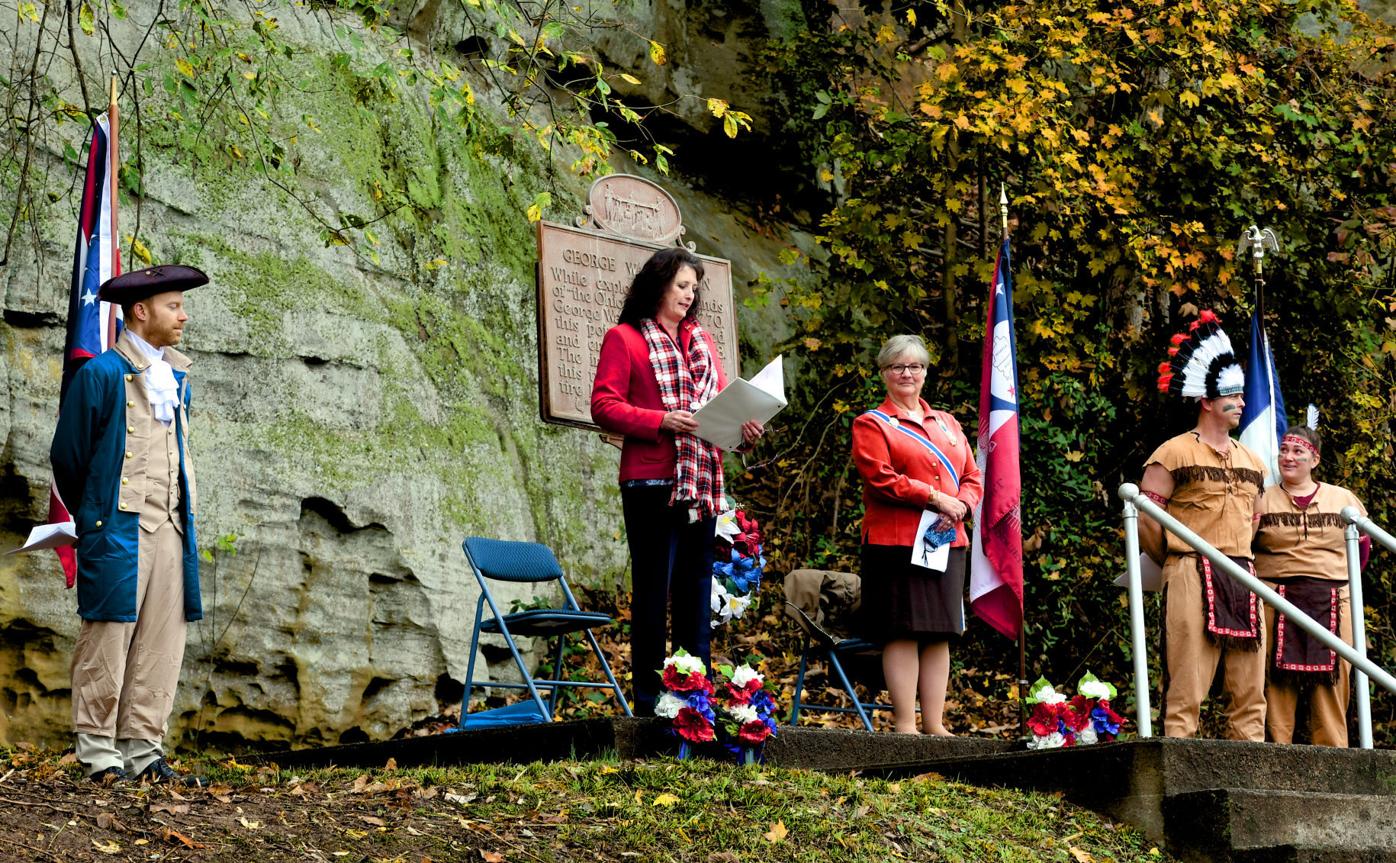 The commemoration in Long Bottom Saturday included a readers theater enacting participants in Washington’s landing, 250 years ago today. At center, narrating, is Gina Tillis, regent of the local DAR.

While the costumes at the ceremony Saturday were in period, one difference between 1770 and 2020 is that masks weren't required in 1770.

The commemoration in Long Bottom Saturday included a readers theater enacting participants in Washington’s landing, 250 years ago today. At center, narrating, is Gina Tillis, regent of the local DAR.

You probably didn’t awaken this morning wondering what George Washington was up to 250 years ago today. But that information is or ought to be of interest to you, because he was here. Well, very close to here.

In October 1770, Washington traveled down the Ohio River from Pittsburgh to the mouth of the Kanawha River, a distance of 266 miles into what was then largely wilderness. A noted surveyor, the man who would lead the nation to victory over the British and through the early years of our independence was seeking land suitable for settlement by his own comrades from the French and Indian War, in which he had fought and which were in significant part fought in “the Ohio Country.”

The river passed through the vast region of Pennsylvania, Ohio, Virginia, and Indiana owned by the Ohio Company, in which Washington’s family was invested. Unless you’re reading this from afar, the place you are right now is land that once belonged to the Ohio Company.

Though the party mostly spent their nights on the Virginia – now West Virginia – side of the river, on the night of Oct. 28, 1770 their encampment was on the Ohio side, just south of the Meigs County village of Long Bottom and north of the mouth of the Shade River (which Washington accurately described as a creek).

Don’t despair if you didn’t know this interesting detail of the area’s history; few people do. I wouldn’t have but for a note a week or two ago from Scott Moody, president of the Lt. George Ewing Chapter of the Sons of the American Revolution. He wrote to say that there was to be a commemoration Oct. 24, conducted by the Return Jonathan Meigs Chapter of The Daughters of the American Revolution, at the site of Washington’s encampment.

Eastern Meigs County along the Ohio River being a beautiful and seldom-visited place (you really should take the drive sometime), I jumped at the excuse to go there. Despite the fine mist that sometimes turned a gray but comfortable afternoon into a chilly one, I’m glad I did.

The ceremony included a readers theater presentation made up in part by readings from Washington’s journal, which mentioned the party’s riverside encounter with Kiashuta, the powerful Iroquois chief.

Wrote Washington on Oct. 28: “In the person of Kiashuta I found an old acquaintance, he being one of the Indians that went with me to the French in 1753. He expressed a satisfaction at seeing me, and treated us with great kindness, giving us a quarter of very fine buffalo. He insisted upon our spending that night with him, and, in order to retard us as little as possible, moved his camp down the river just below the mouth of a creek, the name of which I could not learn. At this place we all encamped. After much counseling over night, they all came to my fire the next morning with great formality[.]”

The beginning of his passage for Oct. 29 is of local significance, because it seems to have named the place. “Opposite to the creek, just below which we encamped, is a pretty long bottom, and I believe tolerably wide; but about eight or nine miles below the aforementioned creek, and just below a pavement of rocks on the west side, comes in a creek, with fallen timber at the mouth, on which the Indians say there are wide bottoms and good land. The river bottoms above, for some distance, are very good, and continue so for near half a mile below the creek.” By “bottom” the surveyor-general-president meant river bottom, the low alluvial land next to the river that is prime territory for farming. The accuracy of his appraisal is evident today. Corn grows well there.

Following a long (and to Washington, annoying) goodbye ceremony, the party of explorers continued down the river.

The phrase, “George Washington slept here” is an old come-on, popular especially back East by those seeking to increase the prestige (and value) of very old houses. George S. Kaufman and Moss Hart wrote a play, “George Washington Slept Here,” in 1940 (it would be made into a movie two years later) about such a house. If all the stories are true, Washington lived to the age of 150 and never spent a night at home in Mount Vernon.

(I remember in that when I lived in White Plains, New York, the Miller House was famous; no doubt it still is. It is preserved as Washington’s headquarters during the Battle of White Plains, coincidentally fought on Oct. 28, 1776, six years to the day after his visit to our part of the country-to-be).

While we do not have such a house here, we do have a place, a modest bluff facing the Ohio River next to State Route 124 south of Long Bottom, that has a plaque which reads: “While exploring the lands of the Ohio Country in 1770, George Washington reached this point on October 28, and encamped overnight. The impressions gained on this trip influenced his entire later life.” That last sentence makes an assumption for which evidence is scarce, but still.