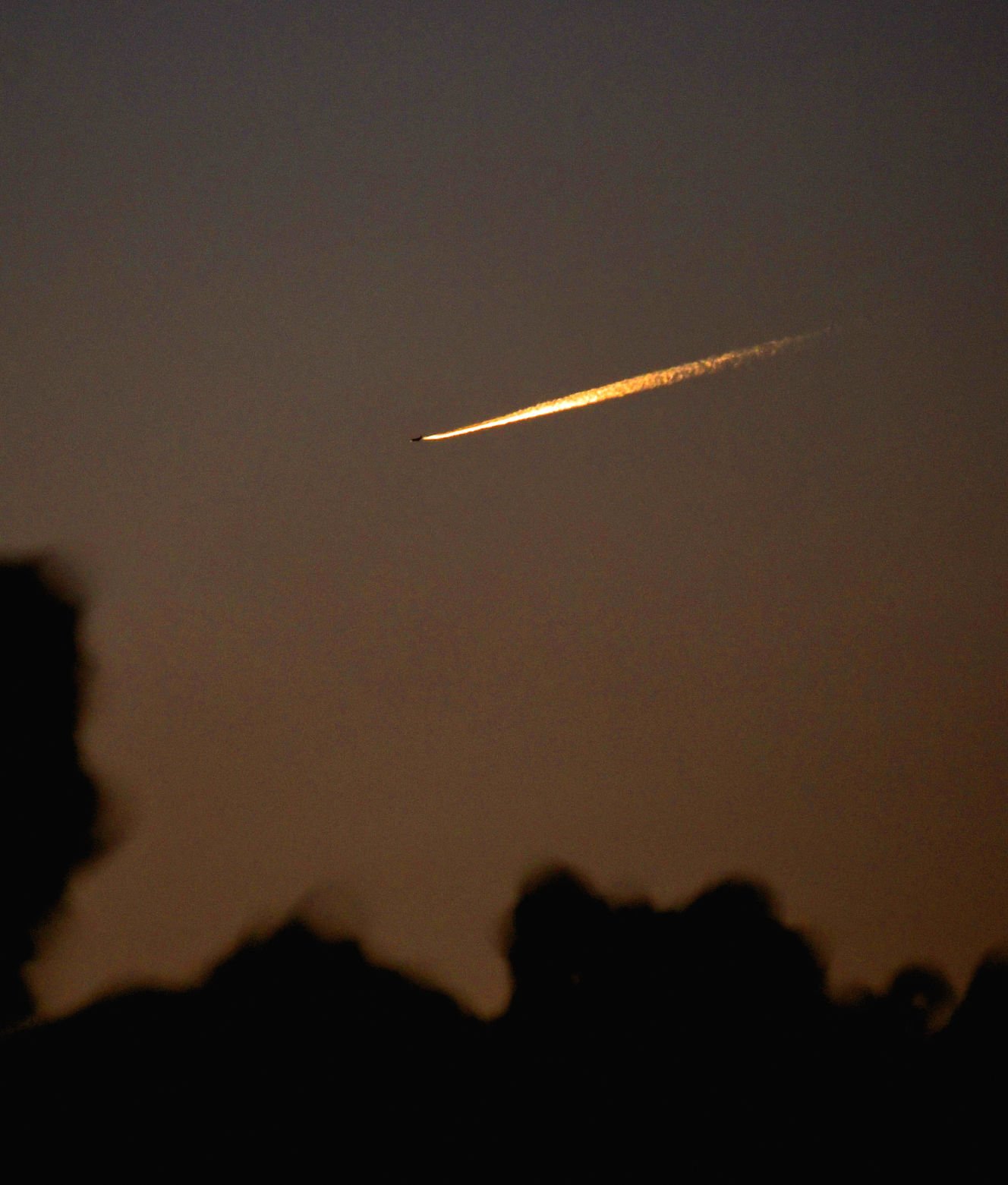 Nice, but not a comet. This is the vapor trail of a jet, flying high just after sunset about where the NEOWISE comet was — though it wasn't visible — last Thursday. Comets don't have airplanes at their front.

Nice, but not a comet. This is the vapor trail of a jet, flying high just after sunset about where the NEOWISE comet was — though it wasn't visible — last Thursday. Comets don't have airplanes at their front.

If you’re going to be a comet, there are considerations beyond just surviving a trip around the sun. There are matters of timing and publicity that need to be taken into account.

When Hale-Bopp was discovered, 25 years ago last Thursday, there wasn’t a lot else going on. It would be more than a year before the next election and we had not yet embraced the philosophy of all politics, all the time. We were still interested in other things. No one. for instance, wrote long and useless “think pieces” on the comet’s effect on Bill Clinton’s chances of re-election the following year.

It was a different era in many respects. While one of its discoverers, Alan Hale (no, not the Skipper from Gilligan’s Island, a different Alan Hale), registered it with the comet authorities (really!) by email, the other, Thomas Bopp sent an actual Western Union telegram. Western Union went out of the telegram business in 2006. The Central Bureau for Astronomical Telegrams — a real thing — named the new comet an unpoetic C/1995 O1.

Though it was discovered in the summer, Hale-Bopp didn’t get visible to most of us until much later. This is important. There was time to prepare for it.

Some said it would be the “comet of the century,” but that was a tall order: The 1910 visit by Halley’s comet not only filled the sky, the earth actually passed through its tail. Mark Twain, born at, well, the tail end of Halley’s 1835 trip around the sun, announced that he would die during its 1910 visit. He did. You can’t beat that kind of publicity.

Hale-Bopp had a build up, and while it fell short of Halley in 1910 (though Halley’s 1986 visit was kind of a dud) it, too, didn’t disappoint. By autumn 1996, one could see it with the naked eye, though because it was headed more or less straight at us it looked like an ever-brightening star. If you looked at it through binoculars or telescope you could almost see the dust and vapors boiling off of it as it approached. It seemed alive and maybe even a little dangerous.

Then the real fun began. In the cool, dry air of the winter, the comet got visible, tail and all, starting soon after sunset each night. It stayed visible pretty much all night. I remember looking at it in the evening and again a little before sunrise the next day. It didn’t exactly fill the sky, but it was apparent to anyone at all observant.

There were comical and tragic aspects to Hale-Bopp’s appearance. The usual suspects reported the expected increase in unidentified flying objects. A cult called “Heaven’s Gate,” which also had a web-design business (really!), decided that it would enter eternity via a flying saucer that it said was cloaked by the comet’s tail. In late March 1997, 39 members of the group donned identical black track outfits bearing “Heaven’s Gate Away Team” patches and Nike athletic shoes. They consumed large amounts of phenobarbital, which they washed down with vodka. They put plastic-bags over their heads. Then they died. Their website (which is still online, by the way) flashed the headline: “RED ALERT Hale-Bopp Brings Closure to: Heaven’s Gate.” The headline was accurate; their bodies were discovered in their rented California home toward the end of the month.

So Hale-Bopp (and Halley’s, 87 years earlier) were far better at the publicity game than poor NEOWISE. Here’s what the comet we have now did wrong.

First, it didn’t get discovered until March 27 of this year. This is not sufficient lead time to prepare any really ridiculous or fatal celebrations. There wasn’t time to organize a cult, and no famous author had been born during its last pass, almost 7,000 years ago. Rather than having two years’ build-up, the thing would come and go in little more than a single season.

Second, you may remember that in March we had other things on our minds, and then and even now there’s little room for pop-culture manias (though some would disagree on this point). It timed its arrival for the height of a very strange political season. (Okay, that’s all we have anymore, ever, but still.)

Third, the things that might normally be associated with a comet’s arrival failed to connect. The comet could have been assigned responsibility for the SARS-CoV-2 virus and rioting in the streets. (And don’t kid yourself that there aren’t those who would have done it, too: as it is, there is an evidence-free belief held by a few loons that COVID-19 is due to the 5G cellular telephone system. Really.) There are headlines that the government is releasing all kinds of new and exciting UFO information. All that was needed was someone to tie it all together.

Some of us have kind of felt sorry for the poor comet, and have done for it what we can, but it fought us at every turn. Besides the poor timing issues of arriving on short notice while everyone was otherwise occupied, it picked a particularly poor season to be an observable comet, as witness attempts to photograph it.

Enemies of comet observation include humidity, haze, and worst of all the moon. Together they’re insurmountable. The first day that NEOWISE ought to have been visible after sunset here was last Thursday, but it was cloudy then. It wasn’t cloudy July 24, but it had been a hot and humid day, and the newly waxing moon illuminated the hazy atmosphere, making everything celestial dimmer than it would be in, say, January.

Nevertheless, along with my neighbor, Tom, whose yard has a more open sky than mine does, I set up the camera Friday night, long lens mounted to capture the celestial spectacle that we hoped NEOWISE would be. I made a quick picture of something that looked vaguely comet-like, but it was obvious pretty quickly that no, it wasn’t a comet but instead the vapor trail of an airliner low in the distant western sky. (Pro tip: comets don’t have airplanes at their front.)

Others I know also fell for this. We all did. This could be because it was the only thing any of us saw that resembled a comet even a little.

So, sorry, NEOWISE, another potential comet of the century, was kind of a bust. But don’t say we didn’t try.

I can still see NEOWISE with a PVS-14 unit, even tonight (Amesville area). It has been a treat to see it earlier on, 10 days ago, naked eye.

I remember watching a lunar eclipse and Hale-Bopp at the same time. That was a trip.