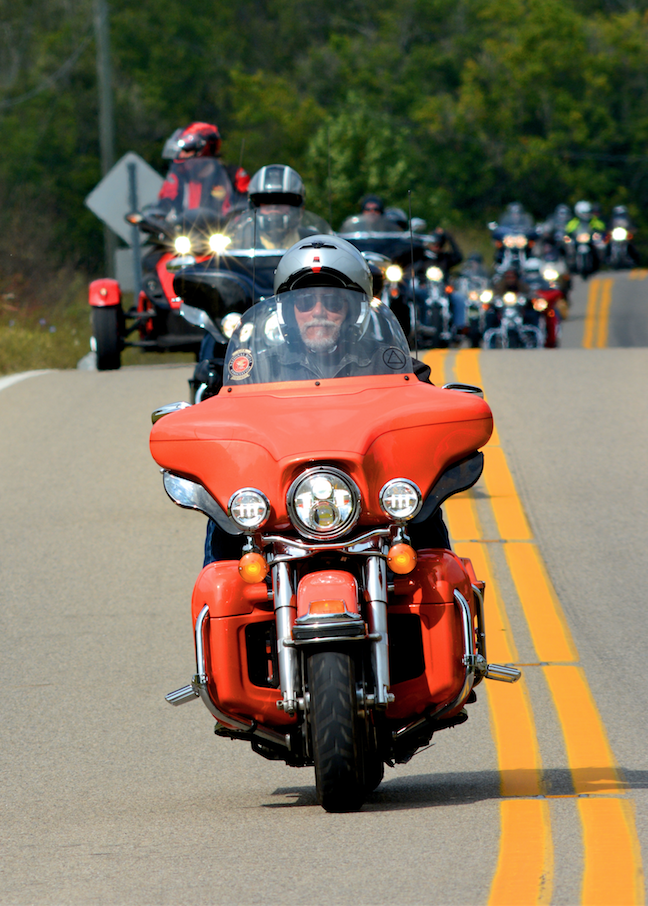 A young whippersnapper of 73, Jorma Kaukonen led the way as he always does on the September 20, 2014 edition of the annual Fur Peace Ranch motorcycle tour. By Dennis E. Powell.

A young whippersnapper of 73, Jorma Kaukonen led the way as he always does on the September 20, 2014 edition of the annual Fur Peace Ranch motorcycle tour. By Dennis E. Powell.

By coincidence I headed to the mailbox just as the big brown UPS truck had backed up my driveway, so I had a chance to see the friendly fellow who has delivered packages here for years. We’ve often spoken cordially over those years — it’s always a good thing when UPS stops by — but sometimes, more often this year, the package is left at my door. Over the years his truck has pulled into my driveway more than anyone who wasn’t me.

After 37 years, today he is hanging up the familiar brown uniform and will come by no more. I don’t mention his name because I didn’t tell him I’d write something and don’t know if it would embarrass him. But since that brief conversation late last week I’ve thought (speculated, really) a little about how delivering packages for UPS is hard work.

If you think about it a little, you’ll come to the same conclusions I did: It’s a job in which you head out too early in the morning to places that are sometimes not easily found, where there may be unfriendly dogs and unfriendly people, to carry to them — maybe a few feet, maybe a much longer distance — parcels that are sometimes small and light but often heavy and unwieldy. You might be thanked for your effort, but that’s nothing compared to the anger unleashed if you get it wrong, if the delivery is delayed or a package is dropped off at the wrong place.

It amazes me that my guy was without exception smiling and friendly. I’ve seen him when the weather was just terrible. There he’d be, tall and thin but clearly strong as all get out because UPS delivery jobs are a constant workout. He’s stopped by on days when the air was so hot and heavy it would take your breath away just to stand there, and here he’d be, wrestling the boxes up the driveway to my house, smiling all the time, always with a friendly greeting or a wave of his workman’s hand.

Occasionally we’d speak for a minute — you can fit a lot of conversation into a minute — and over the years we shared our plans for holidays and such. We’d wave as we encountered each other in passing on the road.

“I’d always recognize the Element,” he said of the car that I drove exclusively for 15 years, “but then you got a different car.” Light black Subarus aren’t exactly rare around here.

His mother isn’t in the best of health, hasn’t been for a few years, so he’ll be spending more time looking after her. I said I hoped he’d make a little time to do whatever he wants to do and he said he would. His retirement comes at the end of a busy year. Maybe that makes the departure a little easier.

I hope he has a happy retirement. He’ll certainly be missed around here. Not just anybody could do the job he has done for close to four decades.

Many things slowed this year, but time isn’t one of them. It has ticked right along, whipping past at what seems ever-increasing velocity. Another friend of mine is reaching a significant marker along the way. Today is Jorma Kaukonen’s birthday. Today he becomes 80 years old.

It is not an unexpected event – nothing is more expected than a birthday — but it is striking to me: it wasn’t all that long ago, it can’t be, that I attended the party Vanessa threw for him in Columbus when he turned 65. A lot of things have happened since then, and when you add them all up it does work out to 15 years, but a straight line from then to now seems much shorter. Our reckoning of time is good for some things but not everything.

The legendary guitarist — in his case it’s not a cliché; there are real legends — is still at work. This year of forced reduction in the pace of our lives hit him harder than it did many of us, as a little reading of his blog demonstrates. He’s on tour, either solo or with his longtime collaborator Jack Casady as Hot Tuna, for weeks and weeks each year. This year, not so much. He and the Fur Peace Ranch crew have produced online concerts, occasionally recorded but generally live, during most of this year. It’s a good thing for his many fans, but I think it has just as much been good for him. Jorma isn’t one to sit still and watch the world go by.

Becoming an 80-year-old is itself an accomplishment among those of his profession and generation. The way of living among blues and rock-and-roll musicians is not typically focused on longevity; in his autobiography, Been So Long, he describes parts of his life that were lived in the particularly unwholesome fashion of the day. To be a robust 80-year-old after some pretty hardcore years is worth celebrating indeed.

A big part of his life has been lived here. Well, near here; a decade or two on a pretty Meigs County farm and more recently at the house he and his family built, also in Meigs. When times are different he has been, and I feel confident in saying will be again, someone you’d run into all the time in Uptown Athens. When the weather is better than just plain awful you’ll find him riding his beloved Harley Davidson (though the belovedness is passed on to a new bike from time to time) all over the area. (I can say from experience that a day’s ride with Jorma is something to be cherished.)

While restricted as we have all been, Jorma and my friend John Hurlbut (who as far as I know celebrates neither birthday nor retirement today) recorded an album that got released recently on vinyl and CD, and that will become available for download on Christmas Day.

So the world hasn’t come to a complete halt, far from it. In thinking of the guys mentioned above, I’m drawn to something famously well said by Teddy Roosevelt and always worth practicing: “Do what you can, with what you have, where you are.”