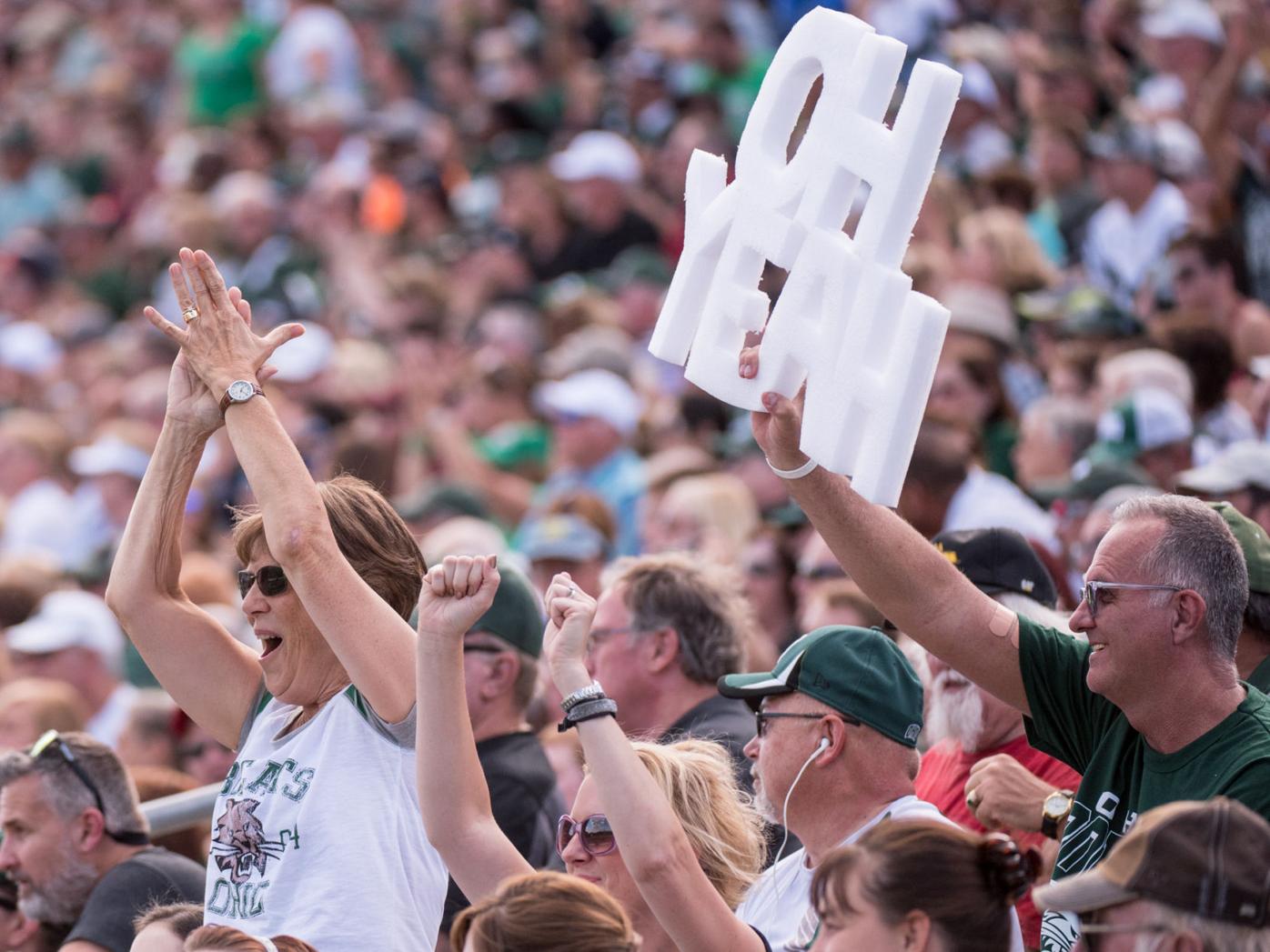 Excited fans filled the whole stadium, enough to make the traditional 'OU, Oh yeah!' cheer as tremendous as ever, yet it wasn't enough to pull a win over Texas State. 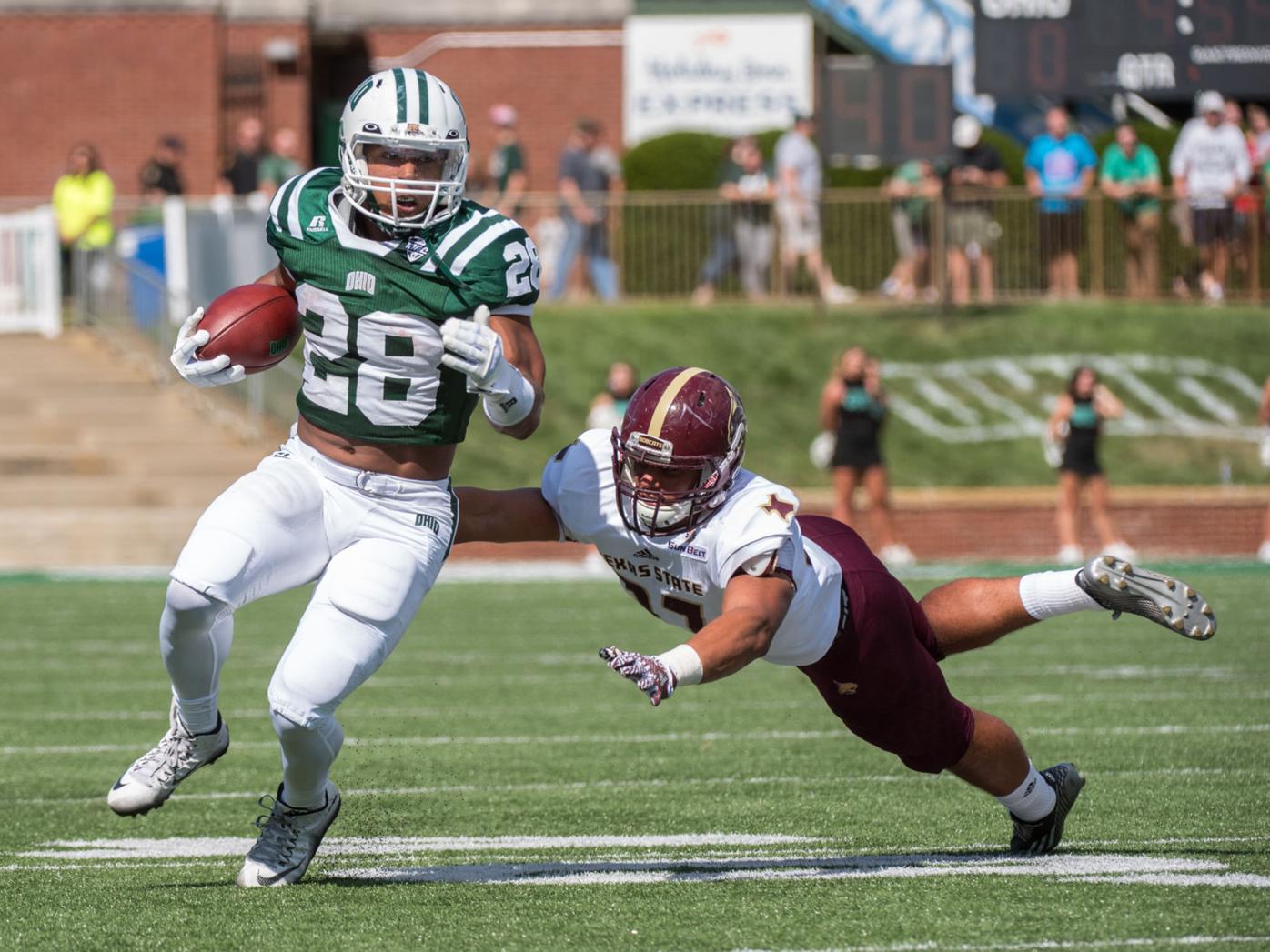 Ohio's Dorian Brown evades the grip of Texas State's Gavin Graham. Our Bobcats, however, couldn't maintain their grip on the lead and lost 56-54 in triple overtime Saturday at Peden Stadium.

Excited fans filled the whole stadium, enough to make the traditional 'OU, Oh yeah!' cheer as tremendous as ever, yet it wasn't enough to pull a win over Texas State.

Ohio's Dorian Brown evades the grip of Texas State's Gavin Graham. Our Bobcats, however, couldn't maintain their grip on the lead and lost 56-54 in triple overtime Saturday at Peden Stadium.

“I could have at least thrown it up to give someone a chance in the end zone,” Windham lamented after the loss. “For the game to end like that with the ball in my hands, it leaves a terrible taste in my mouth. I feel like I let my team down.”

Ohio (0-1) and Texas State (1-0), who share the Bobcat name, swapped the lead nine times from the start of the fourth quarter until the end of the third overtime. In Bobcat head coach Frank Solich’s 50 years coaching football, he said he had never seen a game with so much back-and forth action.

“I’ve never been involved in a game with so many momentum changes,” Solich said. “I thought it was a great game in terms of players not giving up on both sides.”

Windham threw for 380 yards, four touchdowns and zero interceptions on 27 of 45 completions while making his first career start. While the numbers look good statistically, his play was marred by another critical mistake that occurred with just under two minutes remaining in the fourth quarter.

With Ohio leading 31-28, Texas State linebacker Jordan Mittie forced Windham to fumble on a quarterback-keeper that was recovered by Texas State at midfield. A first down could have sealed the game in regulation for Ohio, but instead the ball went back into the hands of TS’s senior quarterback Tyler Jones; he proceeded to throw a three-yard score to wide receiver Tyler Watts with 51 seconds left on the clock.

Ohio’s very next offensive play was a 75-yard touchdown on a screen pass to Papi White. The explosive play put the Bobcats back in front 38-35, but what seemed like a winning play to nearly everyone in the stadium went to no avail. Ohio’s defense couldn’t prevent Jones from engineering a 61-yard drive to set up a 27-yard field goal as time expired, sending the game into overtime, three of them to be precise.

BOTH TEAMS APPEARED SLUGGISH to start to the game as Ohio went into the fourth quarter trailing 21-16. Jones managed to shred the ’Cats defense for 418 yards on 40 of 55 attempts with four touchdowns. He was intercepted twice by Ohio safety Kylan Nelson.

“They have a very good quarterback,” Solich said after the game. “He got going as the game went on and was throwing patterns to the outside very effectively. We didn’t have some answers.”

The two teams traded a pair of field goals in the first overtime. In the second OT, Windham hit wide receiver Jordan Reid for a four-yard touchdown to put Ohio up 48-41 only to see Jones to throw another touchdown and tie the game again.

Jones wasn’t done victimizing Ohio – this time it came as a completed pass on a trick play in the third overtime. He threw the ball behind the line of scrimmage to receiver L.G. Williams, who then threw the ball across the field to a wide-open Jones for a 22-yard score.

“I hate to say it but I think we just got a little tired,” Ohio safety Nelson said. “We knew trick plays were going to come; we just didn’t know when. It’s sickening –  that’s the play that [won] it for them.”

The following two-point conversion attempt was good to put Texas State up 56-48. Ohio replied with an 18-yard touchdown pass caught by Elijah Ball, but the poor snap on their two-point attempt sacked Ohio’s chances at a wild victory in its season opener.

The heartbreaking loss wasn’t the only damage Ohio will have to bring into next Saturday’s game on the road against Kansas. Junior running back A.J. Ouellette started the game but left on crutches after the fourth play of the first possession with what appeared to be a leg injury, and he did not return. Solich did not specify the injury but described it as “costly” in the post-game press conference.

“We have to bounce back next week and prepare for Kansas,” Windham said. “Got to come to practice tomorrow, study film and see what we did wrong. We don’t want to feel this way again.”

To be sure, this was a game that was the Ohio Bobcats’ to lose, with Texas State, a Sun Belt Conference squad, ending last season with just three wins. These other Bobcats were a decided underdog for the matchup in Athens.

Athlon’s Sports & Life website, in its preseason predictions for the Sun Belt Conference, wrote, “Texas State and ULM are expected to finish at the bottom of the league, as both programs begin rebuilding projects under new coaches.”