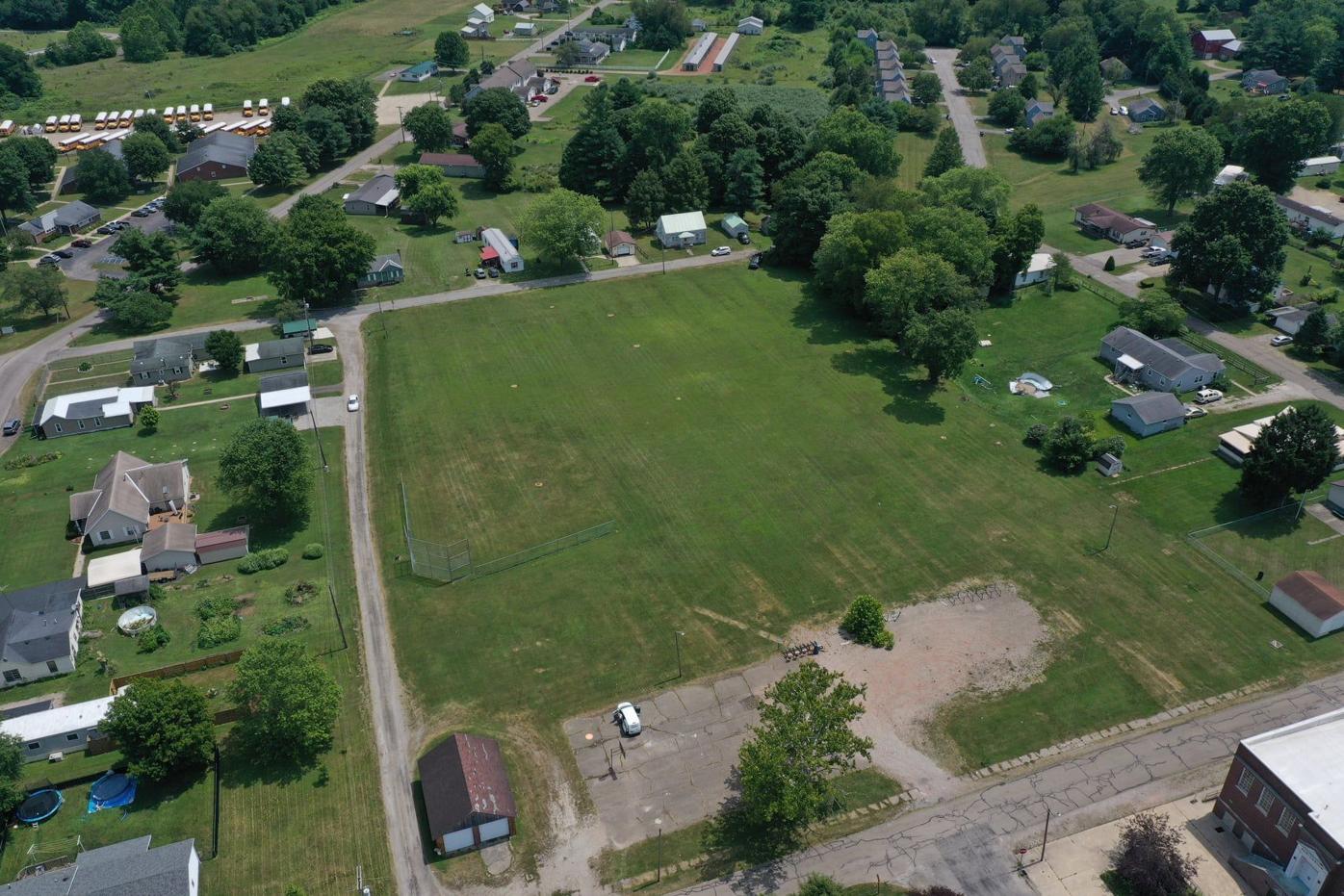 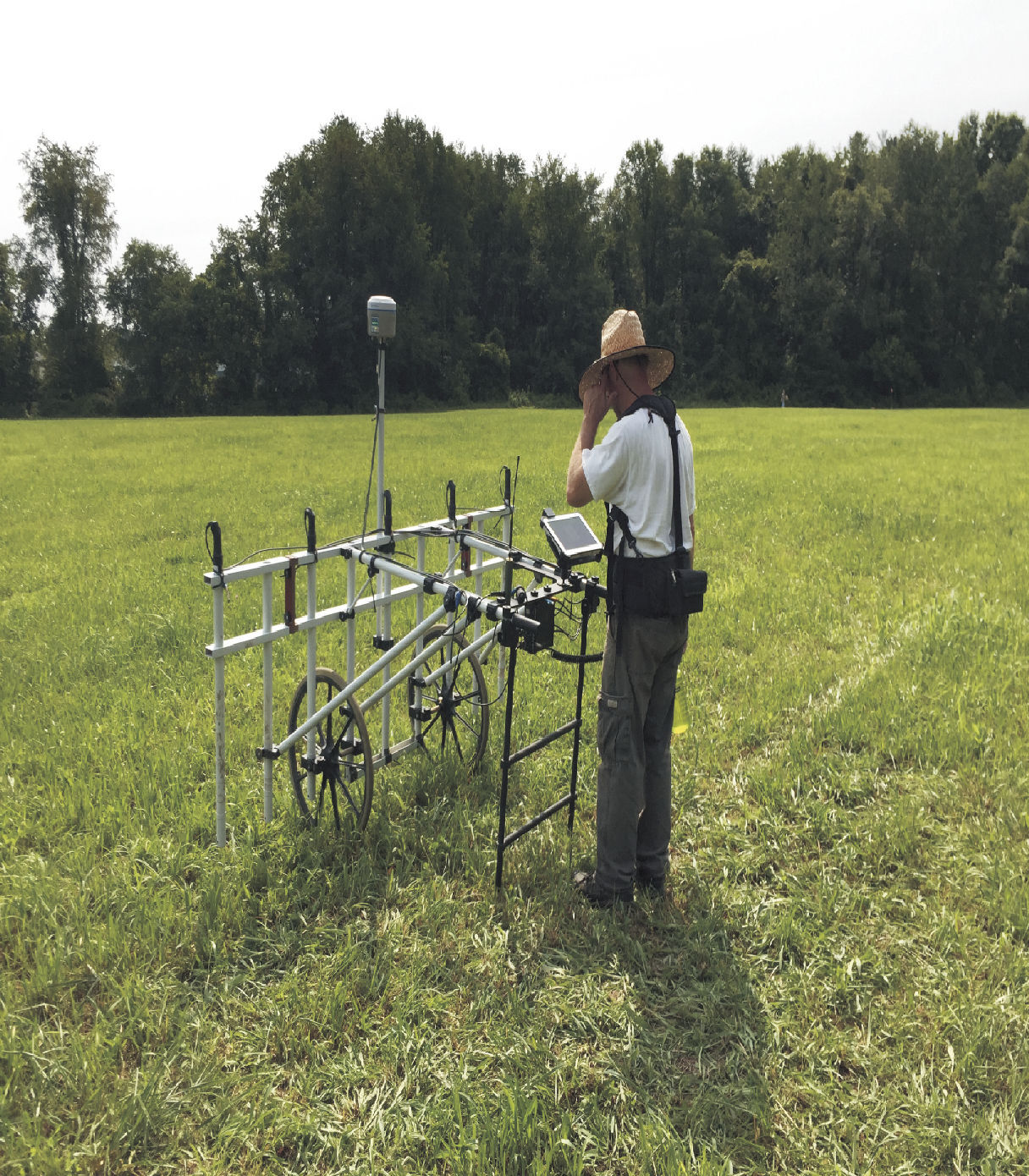 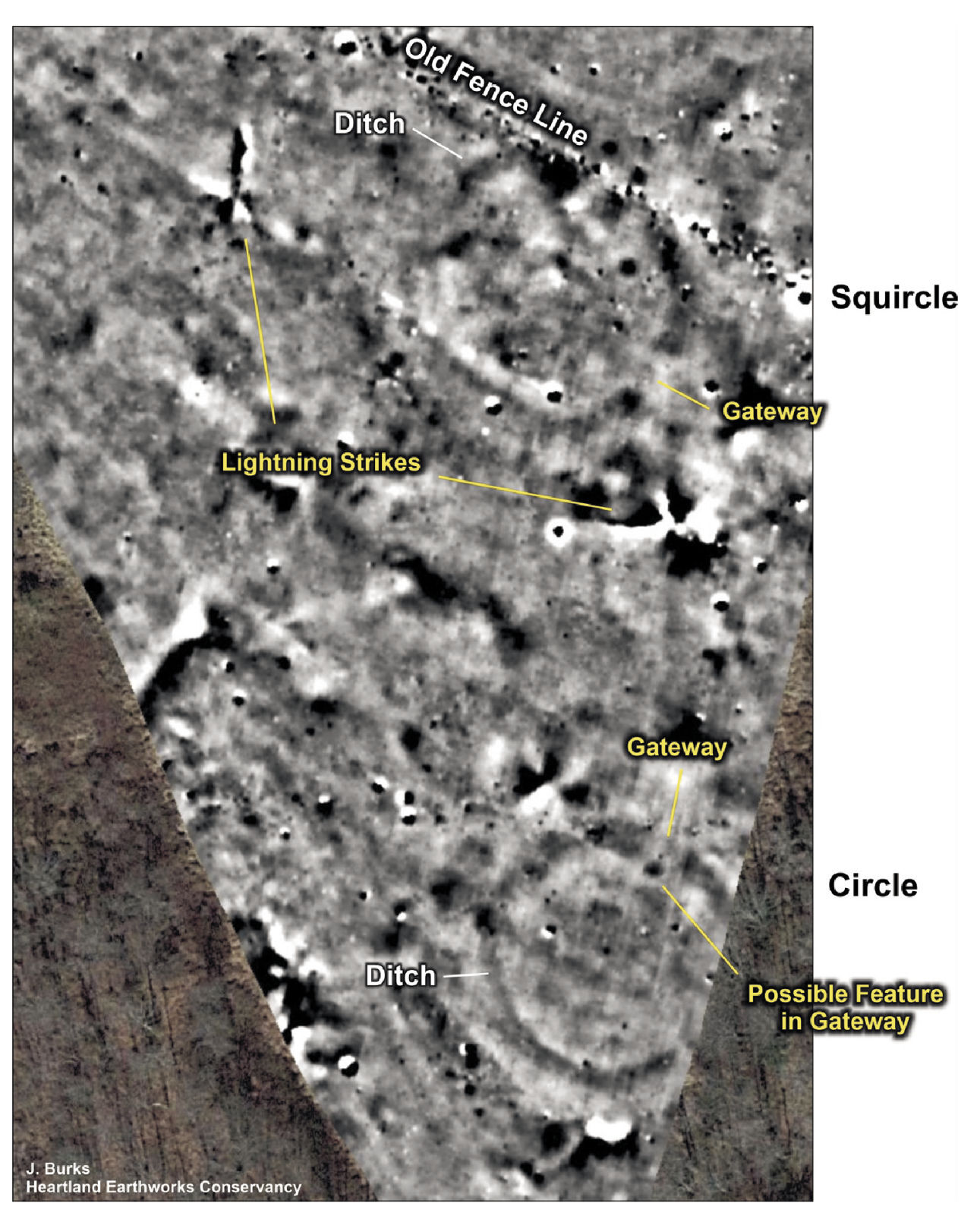 New exploration in The Plains has produced evidence of earthen constructions built by Native Americans who lived here in ancient times. One is a circle and the other has a funny but fascinating name: a squircle.

The investigation was done by folks with the Heartland Earthworks Conservancy. The conservancy is a nonprofit organization with a mission of preserving and protecting Native American earthworks in southern Ohio.

A couple members of the group came at the urging of three local men, including Bill Snider. Snider lives in The Plains and for many years has been involved in The Indian Mound Festival.

“Last Sunday (July 18) Jarrod Burks and his friend began a geophysical survey using a magnetometer on the field on 4th St…” Snider wrote in a Facebook post. “They did about half the field and will return later this year to do the other half.”

A magnetometer can detect past disturbances in the ground.

Burks reported finding the circle and the squircle, which he described as a rectangle or square with rounded corners. It’s estimated the enclosures are 1,700 to 2,200 years old.

Unlike the landmark Hartman Mound in The Plains, the squircle is quite difficult to make out in the 4th Street hayfield. It’s “visible” only with an underground imaging device.

Still, Burks, an archeologist, has a special interest in the site and The Plains.

“I spend a lot of time surveying earthwork sites, mostly in Ohio, and The Plains has a large cluster of enclosures that have received relatively little study,” he told me. “They are also slowly being surrounded by development, which may eventually destroy the archaeological remains of these past cultures.”

Burks calls The Plains “an important place” and is hoping the earthworks here can be preserved. He’s not the only one.

Snider went on Facebook recently to drum up local support and several people replied with interest. He posted in The Plains/Chauncey Neighborhood group that there’s a loose knit group of people “working to find and record and preserve as much as we can of the Adena Mound Group here on The Plains” and invited group members to join.

How they will proceed is not clear, according to Snider. He talks of a possible revival of a Friends of the Mounds group, perhaps with an affiliation with the Southeast Ohio History Center in Athens.

Burks says the squircle is significant because the shape is very common throughout the Mid-Ohio Valley and it dates to a time archaeologists associate with Hopewell, which “is a term we use to refer to a suite to traits, rather than people or a tribe. Those traits include building large, complex earthwork sites.”

The sites often contain burial mounds and were used for ceremonies, events, and gatherings. They were part cemetery, part community center, and part pilgrimage site.

“People from the surrounding community, and beyond, would periodically visit the earthwork sites throughout the year, but they did not live at these sites,” said Burks. “Their settlements were elsewhere, on flat ground along streams running throughout the region.”

As for the many mounds that have been found in The Plains, the larger ones are likely from the Adena culture — which came before Hopewell — and Burks called them “vertical cemeteries,” which “grew in size as more burials were added to the tops and sides of the mounds.”

Burks has returned recently to do more investigation at a second location: the old high school field on South Clinton Street. The land is owned by Hopewell Health and it’s the future site of a clinic.

And he could be coming a lot more.

“(T)his is the mission of the Heartland Earthworks Conservancy, to help people learn more about Ohio’s Native American earthworks … and if at all possible to help preserve them,” he said. “It is also part of my own research.”

In addition to his work with Heartland, Burks is director of Archaeological Geophysics at Ohio Valley Archaeology, Inc., in Columbus.

Heartland is an all-volunteer organization which gets involved in a limited number of projects but Burks says The Plains “is well worth our time.”

Fred Kight is a retired newsman who now does some freelance reporting. Before deciding to take life easy, he worked for nearly 40 years in radio news.