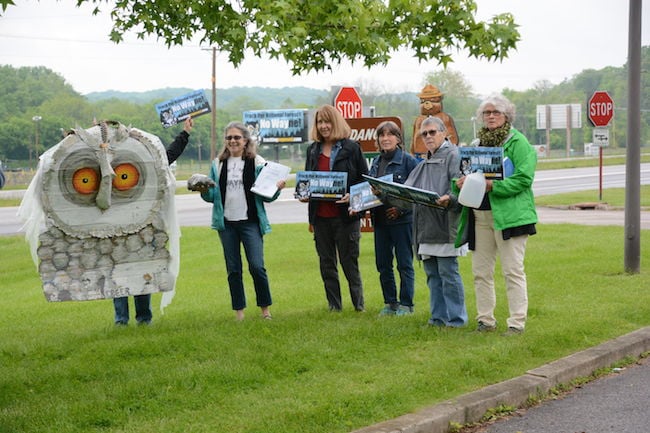 About a dozen protesters from four anti-fracking groups gathered at the U.S. Rt. 33 Headquarters of Wayne National Forest earlier this month in opposition to the possibility of the federal government leasing national forest land near Marietta for deep-shale oil and gas drilling. 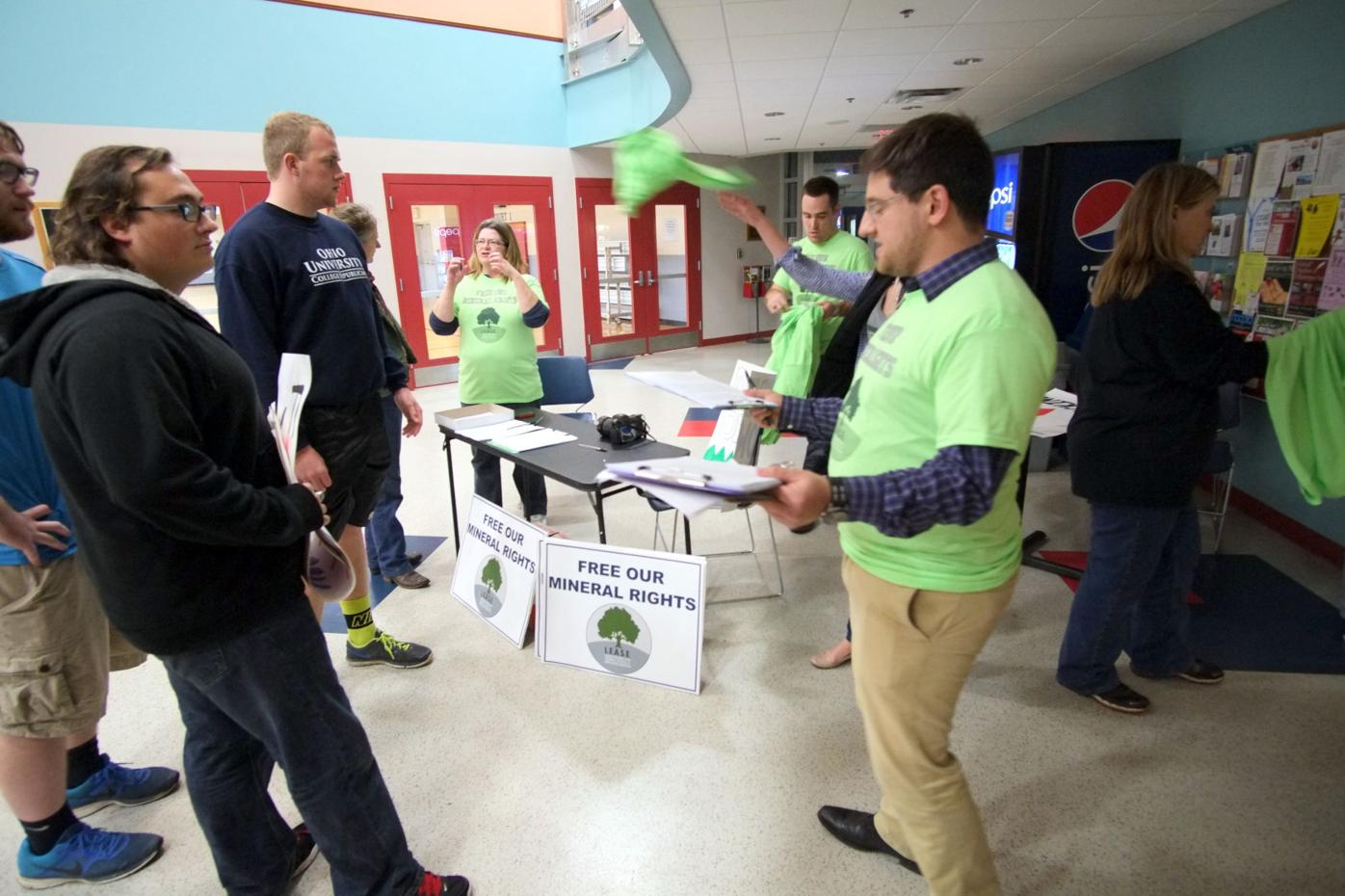 Members of LEASE (Landowners for Energy Access and Safe Exploration) staff a booth at a public hearing on the Wayne National Forest drilling lease issue in Athens last November.

About a dozen protesters from four anti-fracking groups gathered at the U.S. Rt. 33 Headquarters of Wayne National Forest earlier this month in opposition to the possibility of the federal government leasing national forest land near Marietta for deep-shale oil and gas drilling.

Members of LEASE (Landowners for Energy Access and Safe Exploration) staff a booth at a public hearing on the Wayne National Forest drilling lease issue in Athens last November.

Supporters and opponents of leasing oil and gas drilling rights on the Marietta Unit of the Wayne National Forest both are making their voices heard during the ongoing comment period for a draft Environmental Assessment (EA) on the issue.

Their positions couldn’t be more different, though even drilling supporters aren’t completely happy with the draft EA, which found no “significant impact” from leasing forest land to drilling companies.

The comment period, during which parties can submit their opinions on the proposed drilling-lease program for 18,000 acres in the Wayne’s Marietta Unit, extends till May 29, unless the federal Bureau of Land Management grants opponents’ request to extend the comment period.

Four groups who oppose drilling on the national forest held a press conference at the U.S. Forest Service’s Wayne National Forest Headquarters southeast of Nelsonville Wednesday morning, restating their opposition and requesting an extension of the comment period.

Though the event occurred after The NEWS’ print deadline for Thursday’s issue, organizers issued an embargoed news release Tuesday afternoon with anticipated comments from group members.

Meanwhile, two landowner groups who strongly support leasing Wayne National Forest land and mineral rights for oil and gas drilling issued news releases last week. The releases included the text of letters they hope leasing supporters will sign and submit to the BLM, which is overseeing the EA and its approval process.

The EA in question only involves designated acreage on the Wayne’s Marietta Unit for which more than 50 oil-and-gas industry “expressions of interest” have been submitted, but not the Athens or Ironton units of the national forest.

In the yet-to-be-signed finding of no significant impact, BLM District Manager Dean Gettinger, states, “Based upon a review of the EA and supporting documents, I have determined that the proposed action (leasing of 18,494 acres in the Wayne’s Marietta Unit) is not a major federal action, and will not significantly affect the quality of the human environment, individually or cumulatively, with other actions in the general area.”

Representatives of four grassroots environmental groups spoke at Wednesday morning’s press conference at the Wayne National Forest HQ near Nelsonville. In addition to requesting an extension of the BLM’s comment period for the leasing program for oil and gas drilling on the forest’s Marietta Unit, they asked for a public hearing on the draft Environmental Assessment (EA).

The groups included ACFAN, which organized the event, the Buckeye Forest Council, Ohio Sierra Club and Torch Can Do.

In the news release announcing the event, Heather Cantino of ACFAN stated, “The BLM as a federal agency is charged with involving the public in such an important decision as opening our Forest to fracking (deep-shale horizontal hydraulic fracturing). Fracking was not in the 2006 Wayne National Forest Plan so must be fully evaluated with full public input, according to federal law. I’ve spent eight hours trying to decipher the BLM’s so-called Environmental Assessment (EA) and so far find it to be gobbledygook.”

She added, “It will take me many more hours to figure out if there’s any science in this document. So far I can’t find any.”

A public hearing is necessary, she argued in the release, so federal officials can explain the confusing information in the EA. “We need a public hearing so that the public can share its extensive knowledge of the issues and our various attempts at understanding these confusing and consequential documents – with one another, with our community, and with federal officials,” she said. “We must then have time to write meaningful comments.”

Loraine McCosker, co-chair of the Forests and Public Lands Committee of the Ohio Sierra Club and member of the Appalachian Ohio Sierra Club, raised the issue of global climate change in the news releasse (which was intended to foreshadow actual comments at the Wednesday morning news conference).

“Let us be very clear to the USFS (Forest Service) and to the BLM,” she said. “We are facing climate disruption and this proposed leasing of the Marietta unit of the Wayne National Forest will exacerbate the problem of greenhouse gas emissions. To say it will not is not based on science and discredits the Wayne administration as well as the BLM.”

McCosker also addressed injection wells from fracking operations, and the fact that many of these wells – which she said contain “large quantities of toxic, radioactive waste” – are located in Athens and other southeast Ohio counties.

McCosker predicted that fracking in the Wayne “will increase this waste and the probability of water contamination and earthquakes, increase truck traffic and further impact communities adjacent to these wells who have no input into whether they would like this well in their community.”

Groff stated, “We must all insist on an extension of the public comment period and a public hearing, which the BLM is allowed to grant as their responsibility to all citizens for the most robust public involvement, and which is required by federal law for major federal actions that may significantly affect the forest and human environment.

“To say that fracking our (national) forest will not have significant impacts is preposterous,” she declared, while holding up a clod of horse manure “to demonstrate what she really thinks of the BLM documents and their conclusions,” the release said.

Reik summed up the issues and concluded (again according to the news release), “We the public are entitled to a public hearing to clearly raise issues, present recent research, dispel the myths of fracking’s economic benefits to communities and describe the environmental, social, economic and health costs of fracking to our communities.

“It is up to the citizens to say NO! and to demand our rights and concerns be heard,” she declared.

In the past week, two landowner groups have presented a decidedly different outlook on drilling in the national forest, though in some respects they have been no less critical of the federal government’s approval process.

In a news release issued May 11, Landowners for Energy Access and Safe Exploration (LEASE) noted that in recent months, the group has relayed the views of “landowners throughout southeastern Ohio” who want the opportunity to develop minerals on their land that adjoins the Wayne National Forest.

“In addition,” the release said, “a wave of federal, state, and local bipartisan leaders, community organizations, businesses and labor unions joined hundreds of local landowners blocked from developing their mineral rights in submitting public comment in favor of drilling in the Wayne National Forest to the Bureau of Land Management.”

The release says the BLM’s finding of no significant environmental “is certainly a step in the right direction; however, the BLM’s Environmental Assessment (EA) offers inaccurate and wrong assumptions about private mineral rights.”

The LEASE news release called on the federal government to “quickly move through the leasing process, as it’s been delayed and dragged out over four years – effectively blocking landowners from developing their private mineral rights. Given that the federal government continues to expand their ownership of federal lands in southeastern Ohio, this delay is even more troubling as it robs our communities of tax revenues that are vital to our schools and infrastructure.”

The group issued a “call to action” for landowners in Appalachia to support oil and gas leasing in the Wayne National Forest, as well as urge the BLM to modify language in the EA.

“While the Finding of No Significant Impact  is a step in the right direction,” the release said, “the group has serious concerns regarding the ongoing delays with leasing of federal minerals and the acknowledgment by the agency that as much as 10,000 acres of private minerals may revert back to the government.”

Appalachian NARO also is concerned about language in the EA that it alleges would infringe on private property rights.

The group cited a section stating that “the private lands surrounding the Forest Service lands are owned by a variety of people from a variety of income and education levels. Someone who is living in poverty may be more prone than a wealthy person to grant an operator access without carefully considering impacts to his or her household.”

In the release, Bob Hart, president of Appalachian NARO, harshly criticized “the notion that a federal government agency has made an 'assessment’ that the people in Appalachia are essentially incapable of managing their private property without government assistance in such matters as private contract negotiations; (this) is more than a little bit upsetting.

“While we agree with the Proposed Action to lease federal minerals in the Wayne, and the Finding of No Significant Impact in the Environmental Assessment,” he said, “we also believe that the agency is still not addressing the fact that the majority of the acres under the Wayne are privately owned, and the federal government should not impede or delay private minerals under the forest and adjacent to the forest from development.”