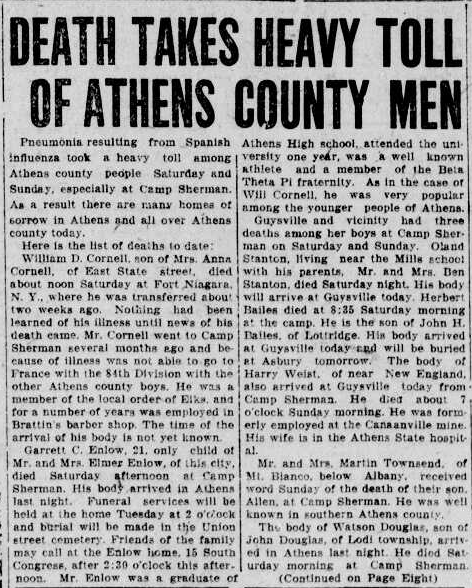 This and other articles appear in various editions of The Athens Messenger. Most activity related to the Spanish Flu was heavily reported about in October 1918 editions. 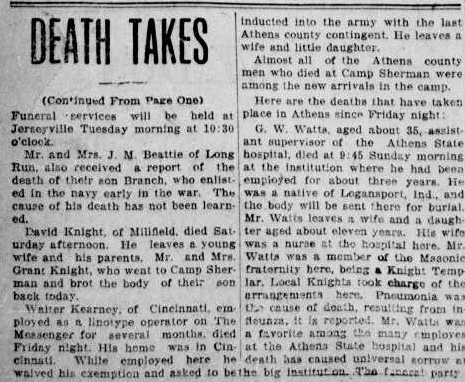 This and other articles appear in various editions of The Athens Messenger. Most activity related to the Spanish Flu was heavily reported about in October 1918 editions.

Editor’s Note: This is the second installment of a two-part series detailing the Spanish Influenza and its ties to Athens County and Ohio. The first installment highlighted the efforts of a man, Dr. Loring Miner, who lived in Athens for a time and had an unexpected role in the Influenza Pandemic of 1918 (a piece of history raised to us by Michael Massa and Paul Staley). This second installment details the responses Athens County had to the influenza pandemic in 1918 and 1919, as well as the responses of other leaders in the state during the time.

In the fall of 1918, the Spanish Flu began making a presence in Athens County. These were also what one would call “unprecedented times,” as news stories of people falling ill to the virus and dying in their homes and in hospitals were butted against bold headlines shouting wartime updates.

As noted in the first installment of this series, Camp Sherman in Ross County was a hotspot of sorts for the Spanish Flu, and the camp was affected more by the pandemic than any other training camp in the nation. Ohio History Connection Curator Karen Robertson noted that nearly 6,000 troops at Camp Sherman fell ill with the Spanish Flu. She researched the 1918 Influenza Pandemic and its similarities to the coronavirus by using the Influenza Encyclopedia.

Super flu symptoms popped up in the camp beginning that summer, progressing rapidly into the fall of 1918. In Athens County, several families with relatives who were at Camp Sherman became infected with the Spanish Flu. Other more isolated cases in the county were also reported in the Glouster area, in Bishopville and in Mountville, according to several editions of The Athens Messenger. The Messenger provided daily updates in regards to area residents falling ill to the Spanish Flu, recovering or dying.

“Almost all the Athens County men who died at Camp Sherman were among the new arrivals in the camp,” The Messenger reported. This was but one early list of deceased young men who inhabited Camp Sherman at one time, however.

But Camp Sherman was not the only source of viral exposure among Athens Countians. The Athens Messenger reported that instances of the Spanish Flu popped up throughout the entire county, in isolated incidences and in entire households. Some Messenger reports also indicated the county’s mines may have been a source of exposure, one being Mine No. 210 in Sugar Creek, with 115 workers falling ill and being absent from work, according to an Oct. 18, 1918 article.

An article in the Oct. 23, 1918 edition of The Athens Messenger brought to light the lack of physicians in the county, with severe scarcity in smaller villages. In Millfield, The Athens Messenger speculated an outbreak of the Spanish Flu had “about reached the epidemic stage,” and Millfield had no practicing physicians in the area. Similarly, Jacksonville had only one physician; Trimble, none; Glouster, three.

The Thursday, Oct. 24, 1918 edition of the county’s newspaper included an article entitled “Flu situation not improved in this county,” which stated cases were confirmed in Athens, Luhrig, Sugar Creek and Millfield, as well as in Glouster.

“They (city leaders) desire these facts to be known, not to alarm people, for fear does not cause this deadly disease,” a Messenger reporter wrote, “and it is necessary that the people should be thoroughly alive to the situation, that they may know that the disease is no respecter of persons.”

Between 6 p.m. that Tuesday and 6 p.m. that Wednesday, 107 new cases were reported in the county. 79 cases of the influenza were reported at the Athens City Hospital alone, and 37 cases were confirmed by Millfield-area doctors, who tirelessly stopped in at households as families fell ill. Eight cases of pneumonia associated with the Spanish Flu were also reported in the county.

On Oct. 26, 1918, The Messenger published on its front page the story of a Glouster man who perished from the disease at the age of 41. George Wade was described as a healthy man, a husband and a father of four children, one of whom was in infancy. His entire household also fell ill, and his wife, unnamed in the article, cared for her children and her spouse when she was battling the disease herself.

“The family had no relatives in this city and Mrs. Wade herself was looking after her husband and children herself, but the day before Mr. Wade’s death, she was unable to leave her bed on account of the illness,” The Messenger reported.

The number of people who fell ill to the Spanish Flu in Athens County specifically is unclear, as many cases of illnesses that could have been related to the Influenza Pandemic of 1918 were identified as pneumonia or simply flu cases.

Director of the Hayes Family Genealogical Center and Rita Levering Local History Research Library John Cunningham told The Athens NEWS in an email that he has been reviewing the death certificates for Athens County in an attempt to document the number of deaths associated with the Spanish Flu. Thus far, Cunningham has found nearly 300 certificates between Oct. 1, 1918, and Dec. 31, 1919.

He noted that some of the Spanish Flu-related deaths listed in The Messenger may have been recorded on the death certificate as bronchopneumonia. He’ll be continuing his review of area death certificates this fall.

Then Ohio Gov. James Cox did not implement mandates during the 1918 flu epidemic, per se. Rather, he and state health officials published a report of recommendations for locality leaders to do with as they saw fit, Robertson told The Athens NEWS.

In Athens County, the Board of Health worked with area leaders to limit face-to-face interactions and opportunity for social gatherings. One major source of gatherings were educational institutions.

Ohio University president Alston Ellis met with Board of Health leader J.M. Higgins and area school superintendents to strategize a plan for tackling the rise in influenza cases in the county. Prior to that meeting, area schools had recently been closed and social gatherings were banned in the county. OU students were still housed on campus, however.

After the lengthy meeting, the university announced it would close its campus and send students home; the university was ultimately closed for two weeks, with students coming back to the area on Oct. 21, 1918.

“This step was taken on account of the influenza, not epidemic here, but headed this way through people travelling in and out of Athens from infected towns and cities in the state,” The Messenger reported. The morning of Oct. 8, trains packed with female OU students were making their way out of town. Some young women were reportedly still in the residence halls, but they, too, were in the process of moving out. 250 male students, all associated with the S.A.T.C., remained in Athens for a time, but these men were put under strict quarantine, according to The Messenger. No influenza cases were reported among the male population on campus at that time.

Schools and their athletic programs were shut down and canceled. For example, a game between Glouster and Murray City was canceled by the county’s Board of Health on account of “health authorities not considering it wisdom for a crowd to congregate under the existing conditions,” according to The Messenger.

Aside from schools, dance halls, churches, movie theaters, pool rooms and other recreational spaces were all closed through a health order issued by Health Officer Higgins, which spanned two weeks in October with a weeklong extension added onto it as time passed.

The Board also advised the use of face masks for those who needed to leave their homes during the day. These masks, The Messenger reported, were made of gauze. Health officials advised these masks be worn no longer than two hours. In order to sterilize them, Athens Countians were asked to place them in boiling water for 30 minutes, then to transfer the gauze to cold water for soaking. Masks were to be dried and ironed before reuse.

In other parts of the state, people protested closures, but this wasn’t a trend seen in Athens County (at least, not in the editions of The Messenger that spanned from October to December in 1918, when the disease was at its most potent in the county).

The county wasn’t without controversy during the 1918 flu pandemic, however. The Athens County Dry Federation launched a campaign against the use of liquor at Camp Sherman. Federation leaders H. T. Phillips and Frank S. Roach took out ads in The Messenger to correct an apparent rumor at the time: carloads filled with whiskey bottles were being driven into the camp and given to sick soldiers (whiskey was then marketed as a treatment of sorts for the Spanish Flu, as was Vick’s VapoRub).

Prohibition era was on the horizon, but area temperance activists were pushing for an end to alcohol sales. One particular ad, which ran in the Oct. 19, 1918 edition of The Messenger, contained information from Major James F.C. Duvall, camp adjunct.

“There is not a word of truth in the statement that carloads of whiskey are being shipped and used to counteract the epidemic at Camp Sherman,” Duvall stated. “An offer was made to furnish whiskey, and was emphatically refused.”

Other cities in Ohio took different approaches to combatting the pandemic, Robertson said. Across the board, schools were shut down throughout the state, but the speed in which leaders made decisions varied. Cincinnati, for example, closed most public spaces by Oct. 6, and Dayton followed suit by Oct. 8. Cleveland and Columbus held off on the closure of public spaces until Oct. 14.

Each city also went through cycles of school closures, Robertson found. A city would close its schools when cases of the virus were increasing, and after cases subsided, schools would reopen. After the reopening, students would fall ill again, and the schools would close yet again. This cycle continued throughout 1918 and 1919.

The Spanish Flu had taken about 50 million lives around the world, more than the Black Plague, Robertson said. In Ohio, Cleveland was hit the worst out of Ohio's major cities, with a death rate higher than New York City or Chicago. Toledo escaped with a much lower death rate out of the major cities in the state, losing only 311 per every 100,000 people.