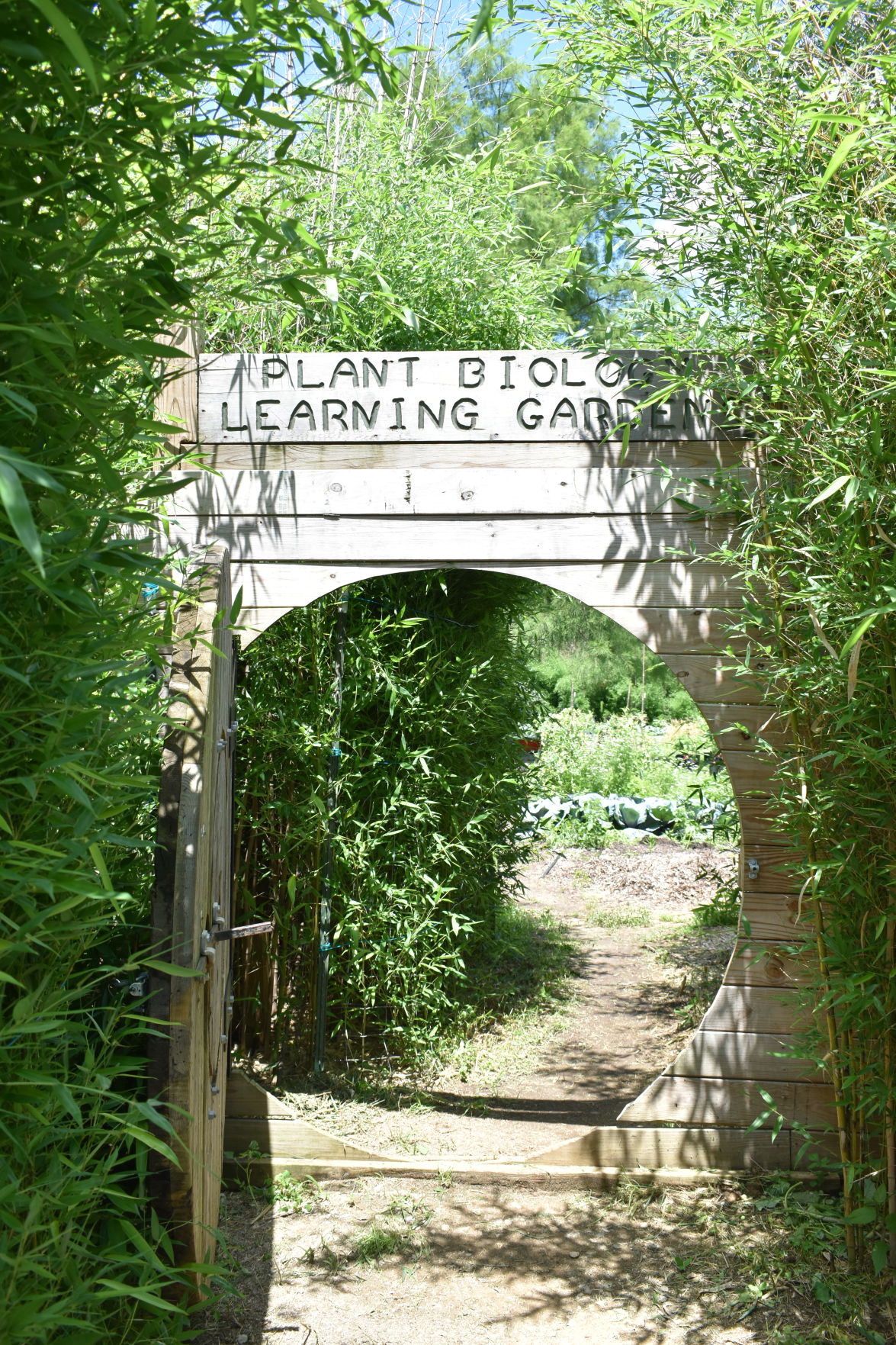 This is the bamboo-wreathed entrance to the “circle garden” inside the OU Student Farm located off West State Street in Athens, behind OU’s Innovation Center. Photo by Conor Morris. 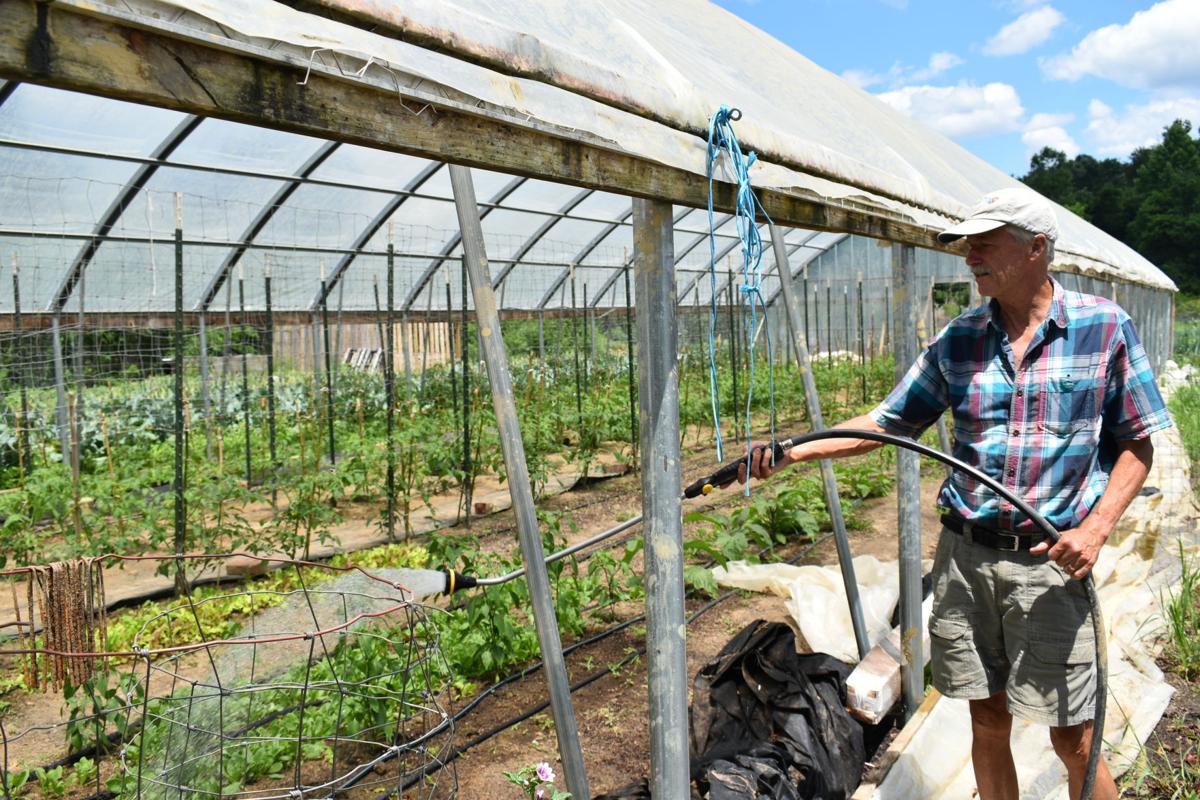 OU Associate Professor of Plant Biology Art (Arthur) Trese waters vegetables at the OU Student Farm in Athens earlier this summer (these veggies are all fully grown or have been picked by this point). Photo by Conor Morris 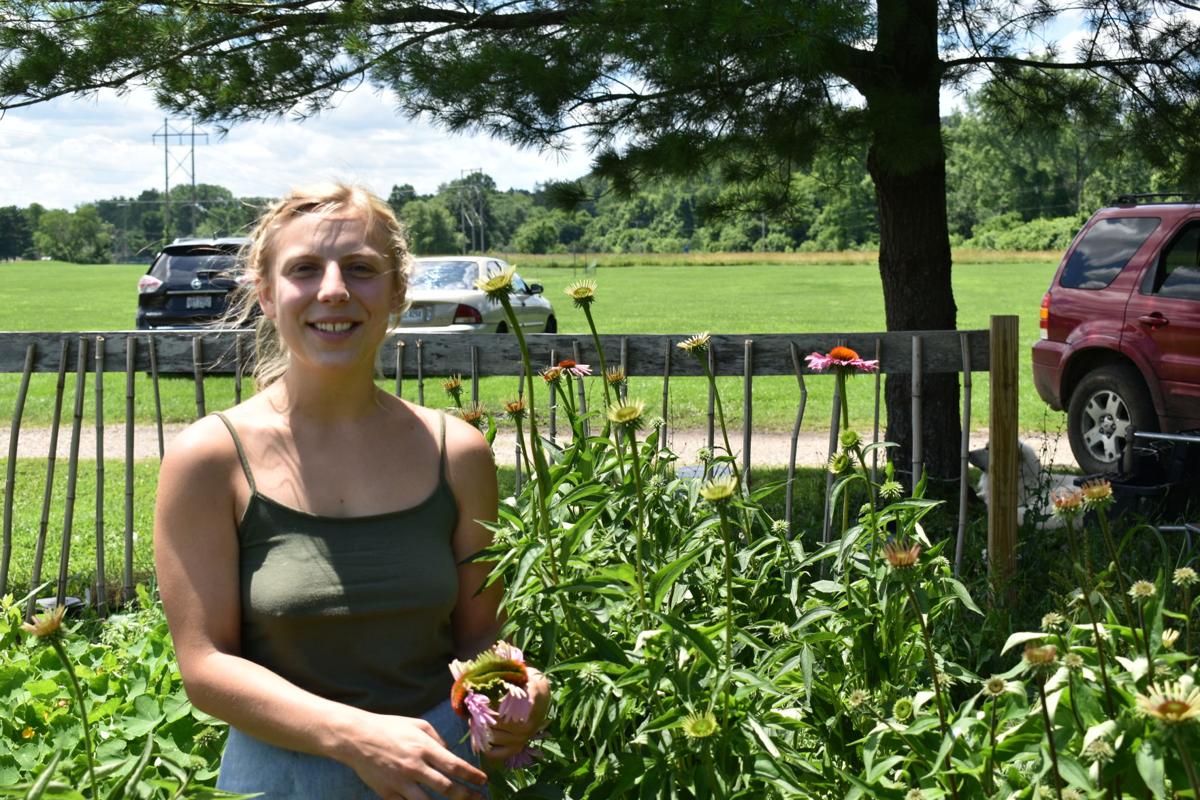 OU student Julie Anna Scott tends to a host of edible flowers and plants in her garden plot at the OU Student Farm, located off West State Street in Athens. Photo by Conor Morris.

This is the bamboo-wreathed entrance to the “circle garden” inside the OU Student Farm located off West State Street in Athens, behind OU’s Innovation Center. Photo by Conor Morris.

OU Associate Professor of Plant Biology Art (Arthur) Trese waters vegetables at the OU Student Farm in Athens earlier this summer (these veggies are all fully grown or have been picked by this point). Photo by Conor Morris

OU student Julie Anna Scott tends to a host of edible flowers and plants in her garden plot at the OU Student Farm, located off West State Street in Athens. Photo by Conor Morris.

Ohio University earlier this year announced that it’s now buying food both from the Chesterhill Produce Auction in Morgan County and from the university’s Student Farm on West State Street for its dining halls and markets.

While the growing season is beginning to wrap up, the Student Farm – located behind the OU Innovation Center, down a gravel road off West State Street – has been humming with activity from students and graduate students all summer, busily tending to and harvesting plenty of fruits and vegetables.

The Student Farm also has been running a weekly produce sale, which has been continuing this fall semester. It typically takes place from 2-4 p.m. Wednesdays outside the Atrium Café in OU’s Grover Center. Current produce (as of this Wednesday) include fresh sweet potatoes, tomatoes, raspberries, hot peppers, beets and much more.

Where OU sources food is an important consideration because the university buys millions of dollars of food every year for use in dining halls and campus stores and markets. However, according to statistics provided to The NEWS in 2016, the university only purchased about 17 percent of its food from “local” food vendors in the 2014-2015 fiscal year. Those were defined as sources located within 250 miles of the Athens campus or simply within the state of Ohio.

The university buying food from Chesterhill, Morgan County, (about 30 minutes away from Athens by car) and the Student Farm will mean reduced transportation costs, less fossil fuels used, and more dollars going back to the local and regional economies. Plus, money earned from the Student Farm’s sale of produce goes back to funding Food Studies-themed internships for students.

THERESA MORAN, ASSISTANT PROFESSOR and director of OU’s Food Studies Theme, said Wednesday that the university beginning to use this local food, especially from the Chesterhill Produce Auction, resulted from a lot of hard work from the Farm to Ohio Working Group (FOWG). The group includes herself, leaders from OU Culinary Services, OU’s Sustainability Office, Rural Action and Community Food Initiatives (CFI).

The big hurdle that the group needed to overcome in order for the university to buy more local food, Moran said, was for the farmers and producers who sell their food at the Chesterhill Produce Auction to receive GAP (Good Agricultural Practices) certification, a third-party audited process to ensure food safety and best practices at those farms.

Rural Action has helped conduct those trainings for farmers and participants of the Ohio Student Farm, with money coming from OU’s Sugar Bush Foundation to help offset the costs. The FOWG was created only after Moran received OU Sugar Bush Foundation funding to begin her long-term Initiative for Appalachian Food and Culture grant project (which includes Rural Action and CFI).

The GAP certification is especially important, Moran said, because that means farmers and Student Farm growers can use that certification to help sell their produce to more retailers throughout the region, which includes OU.

Because the working group just achieved that GAP certification this year, and because OU Culinary Services doesn’t serve as much food in the summertime – when the bulk of produce is typically available at market – the group had set a modest goal for the university to buy roughly $25,000 of produce from farmers within 100 miles of the university this year.

But Moran noted that the larger goal is to move the university toward a “Ohio Neighborhood” concept, where it purchases more food from producers and growers within that 100-mile area; she said she and others hope that OU eventually will enshrine that concept in its sustainability and procurement protocols.

To that end, Moran said that the university’s Central Food Facility is exploring food preservation in order to make bulk food amounts purchased from local producers last past the growing season.

“During blueberry season, they bought quite a lot of the blueberries and froze them for future use,” Moran said.

Still, OU spokesperson Jim Sabin said that it’s not clear how much exactly OU Culinary Services will be able to purchase this year.

“It is not clear what produce will be available for us to purchase each auction, nor are the quantities guaranteed,” Sabin said. “We are working to utilize the items across our Culinary Services’ venues. We are also working to increase the amount of neighborhood foods purchased for OHIO Culinary Services operations through Rural Action and The OHIO Farm.”

Tom Redfern, director of sustainable agriculture and forestry for Rural Action, said that this work is a step in the right direction.

“The university buys a huge amount of food for students, so now a portion of that budget can be spent locally so money from the university will be going back to the community when they buy from local farmers,” Redfern explained.

Joy Kostansek, a graduate assistant with the Food Studies theme, and Moran noted in separate interviews that they have high hopes for continuing to work with OU Culinary Services to figure out how that department can use more local produce.

“This region has not only a great food system but also the potential for an even stronger one,” she said. “I’m a master’s student, and my research is looking at institutional procurement power, and ways for small farms to break into being an actually viable economic entity for wholesaling. This is a huge step for OU to recognize the power it has in this region and the positive influence it can have.”

ARTHUR TRESE, ASSOCIATE professor of plant biology at OU, has managed the Ohio Student Farm since its inception. In an interview at the farm over the summer, he noted that the farm provides a great learning tool for students from a variety of disciplines. Students from all kinds of different majors taking his sustainable agriculture class at the farm, and multiple paid interns help take care of the farm over the summer, he said.

Still, it’s a lot of work. Trese was busy watering dozens of pepper, tomato and kale plants while this reporter spoke with him.

“Food has always been our connection to nature, so growing up knowing not just what it is that you’re going to eat but all of the living things around it (is important),” Trese said. “What I’m teaching students here about (is) the biodiversity aspect of a managed outdoor space that serves our needs as well as the needs of a lot of other organisms.”

Trese added that the farm is essentially a learning lab, with research plots for graduate students and faculty at the university and some other campus organizations.

One example is Julie Anna Scott, an OU student studying sustainable agriculture and herbalism, who has a plot at the farm dedicated to medicinal and edible flowers and plants. So, imagine a mixture of echinacea, lemon balm, yarrow, lavender and plenty of other flowers. “I started this as a passion project because flowers excite me more than produce,” Scott said.

In addition to using the plot for her studies, Scott said she does sell some of her plants to local businesses, including Becky Clark with Pork and Pickles.