As of this week, all of the Athens County school districts have mobilized to develop plans of action to make sure students are still fed as they remain closed due to concerns over spread of the coronavirus (COVID-19).

The gist of these efforts is that Athens City School District, Trimble Local School District, Nelsonville-York City Schools, Alexander Local Schools and Federal Hocking Local Schools are all working to deliver the usual breakfast and lunch that students receive when they go to school. This is important considering the food insecurity rate in Athens County is upward of 19.3 percent, the highest such rate in all of Ohio counties in 2019.

Meanwhile, some of the school districts are preparing to potentially move to online/remote-only methods of learning, anticipating the strong probability that Ohio Gov. Mike DeWine will extend a mandate closing schools (which is set to expire on April 3) through the rest of the school year.

Athens City Schools Supt. Tom Gibbs said Tuesday that his district is working to implement delivery of school lunches and breakfasts to all students starting on Monday, March 23. Meanwhile, he said in an email to parents that the district is planning on moving to remote instruction by March 30 if at all possible. He asked parents to fill out a survey to help the school district determine their Internet and device capabilities at home, as well as what their child’s food needs are. Gibbs explained that the district is currently in “data collection mode.”

“We’ll make a determination about how we do remote learning based on the response to the survey,” Gibbs said. “Do we have enough devices to give everyone a device (to use the Internet)?… If we learn about, say, 100 people who don’t have Internet, we can contact cellular companies about (Internet) hotspots… If we need 100, we can do that, if we need 1,000, we can’t.”

Otherwise, the school district will send “blizzard bags” to students’ homes with educational materials in them.

Over at Nelsonville-York City Schools, Supt. Rick Edwards said that his district this week has begun going door-to-door to deliver breakfast and lunch to its students on Mondays, Wednesdays and Fridays. In areas where the schools’ buses can’t reach, Edwards said that school district’s staffers are using district vehicles or even their own personal vehicles to deliver food.

“Our staff just absolutely killed it yesterday; they totally exceeded my expectations,” he said. “We served probably about 980 kids.”

Edwards said he’s been closely watching the daily afternoon press conferences from Gov. DeWine, as many have, to see if he will move to extend the closure of schools through the end of the semester. He said the NY school district has Chromebooks it can loan out, and has developed some semblance of an online instruction environment for most – but not all – grades, so, a move to all-remote instruction will be difficult.

“We have pockets of people and families that don’t have Internet or sufficient devices,” he said.

At Alexander Local Schools, Supt. Lindy Douglas said Tuesday that starting on Monday, March 23, students will be expected to complete school work from home for the next three weeks, to be picked up in the form of “spring packets” from the school district’s cafeteria between 8 a.m. and 1 p.m. on Monday.

“If you cannot make this pick-up time, you can pick up your work on Tuesday at the following pick-up points,” Douglas wrote. “Please contact your building principal to make this arrangement. This will be the weekly schedule going forward. Return your completed packet each Monday when you pick up the next spring packet.”

Douglas added that transportation or home delivery could be available for those who need it for those packets.

Meanwhile, grab-and-go breakfast and lunch will be available at the following locations for Alexander Local Schools from Monday through Friday, 9 a.m. to 11 a.m.

John Hurd, Trimble Schools superintendent, said in an email Wednesday that his school district is starting delivery of school lunches and breakfasts Wednesday (yesterday) at 11 a.m. and will provide that door-to-door service “daily until further notice.”

Hurd added that a “distance learning model” will be launched on Monday, in which pre-kindergarten through second grades will be using traditional paper and pencil and grades 3-12 will be online.

David Hanning, superintendent of Federal Hocking Local Schools, said Thursday that his school district is now planning on distributing food daily at a variety of locations in the school district. We've included the list below. 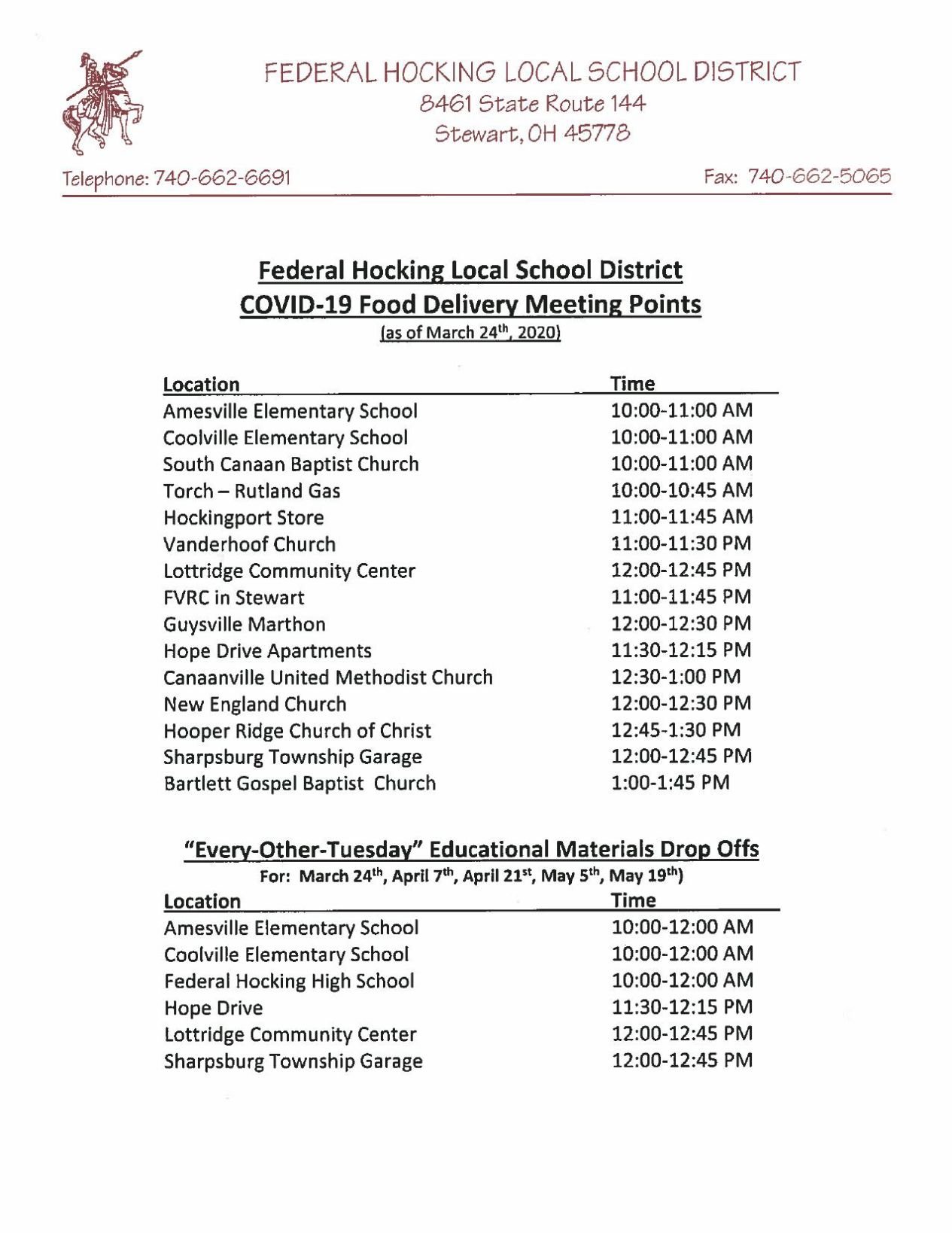 Students or their families will also need to stop by at those points to pick up a packet of learning materials from their teachers that they will work on over the next two weeks.

Hanning explained that students won't need to return those packets, mostly because the school district is trying to minimize contact between people.

"Our teachers have done a really outstanding job," Hanning explained. "We've asked them to come together and say, okay, first graders, what do we want them to do in the next couple of weeks? What kinds of things do we want them to read? What questions should they be asking? How do we keep them physically active at home?"

Additionally, Hanning said that teachers will call all of their students to check in on them and their progress once a week while the school closure continues.