Photo at left: Athens High School alum Joe Burrow throws a pass for the LSU Tigers, a team that he’s got competing for a national championship this season. Photo courtesy LSU Athletic Department. Photo at right: Joe Burrow, center, with his mom and dad, Robin and Jimmy, at the Fiesta Bowl on Jan. 1, 2019, which LSU won 40-32. Provided photo. 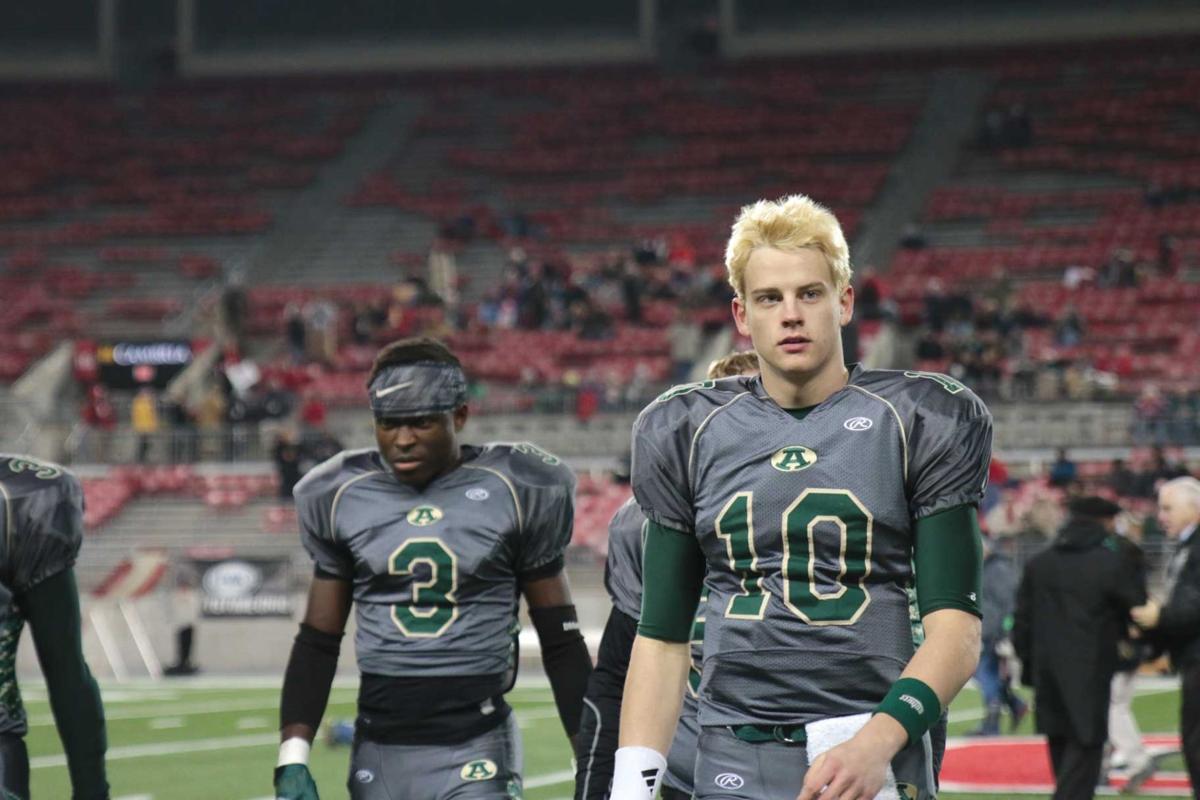 This photo of Joe Burrow (No. 10) was taken on Dec. 4, 2014, right before the start of Athens High School’s state District III tournament final in Toledo. Trae Williams is on the left. Athens ended up losing 56-52 to Toledo Central Catholic in a thriller. Photo by Trisha Smathers.

Every weekend that Louisiana State University plays a football game, Robin and Jimmy Burrow pack their bags and head out from their home in The Plains. The mother and father of Tiger quarterback Joe Burrow want to be there in person to applaud his drive to a possible national championship and Heisman Trophy.

“We mostly fly out of Columbus into either Baton Rouge or New Orleans and then rent a car,” said Robin. “We were able to drive together to Nashville for the Vanderbilt game.”

Sometimes Jimmy drives to away games and Robin flies out after work on Friday. She’s a school principal in Meigs County, so that’s a long day on the road and in the air but she has no complaints.

It’s an arduous schedule that Robin maintained all by herself last season, according to Jimmy, which is a big reason why he decided to retire as defensive coordinator for Ohio University’s football team. He also wanted to see Joe play his final season of college football.

“We are obviously very proud of Joe and very thankful for the opportunity he has been given at LSU,” Robin said. “He has worked very hard to get to this point, and we are happy to see that his hard work and determination are paying off.”

Joe Burrow started making local sports headlines as a student at Athens High School. He excelled at both basketball and football but was especially good on the gridiron.

Burrow was awarded the Ohio Mr. Football Award as a senior and in 2014 committed to play at Ohio State University. Although he did well, he was denied the opportunity to lead the team and transferred to LSU last year. In his first summer at LSU, Burrow’s extended family had a photo taken with all of them wearing “Geaux Jeaux Jeaux” T-shirts, reflecting the tongue-in-cheek Cajun/French spelling of any name with an “oh” sound at the end.

So far this season the LSU Tigers are undefeated and this week were ranked No. 1 in the Associate Press Top 25 football poll and No. 2 in the Coaches Poll, with Alabama sitting at No. 2 and No. 1, respectively, in those polls. LSU will play at ’Bama this Saturday in what’s being billed as the game of the season.

Burrow’s play at quarterback has been spectacular, and both a national championship and Heisman Trophy (awarded to the best player in NCAA football) are within reach.

“There is still a long way to go before that final (Heisman) list comes out for voting,” Robin Burrow said. “But at this point it seems that he is privileged enough to be in that conversation. It’s pretty overwhelming to think that his name is in the company of some of the best college football players of all time.”

Many LSU fans wait outside the stadium after games asking for autographs and photos and Joe is happy to oblige, according to Jimmy, who said his son “for the most part stays pretty humble” and is not letting the adulation “go to his head.”

As for the possibility of LSU finishing the season as the top team in the country, Robins calls that prospect incredible.

“That, too, has always been Joe’s dream,” she said.  “That potential opportunity is one of the reasons that Joe went to LSU, instead of choosing another school when he transferred from Ohio State. LSU has high-level players, and now has an offensive scheme that fits Joe’s strengths as a football player.”

WITH HIS SUCCESS, JOE and LSU have picked up a lot of local admirers.

“The local support from The Plains, Athens, really all of southeast Ohio… Ohio State fans, even… is really overwhelming,” Robin said. “We appreciate the support so very much.”

This backing does not go unnoticed.

“Joe definitely feels it,” Robin said. “Since he is so far away, I’m not sure that he is 100% aware of the high level of support; however, we definitely communicate to him as much as we can about the local support.”

After home games, Robin and Jimmy spend time with Joe at his apartment before they have to leave to come back to Athens Sunday afternoon. “He usually has him a mom-cooked meal on Saturday night,” said Jimmy.

After dinner they often turn on the television to watch – you guessed it – football.

Joe has a degree in consumer and family financial services. He graduated in only three years while at OSU.

On the field he’s classified as a senior but he’s now in graduate school at LSU. Despite his classroom accomplishments, he’s hoping to have a career in football.

“Joe is definitely working hard to get the opportunity to go into the NFL,” said Robin. “Going pro is something that Joe has dreamed of his whole life, so Jimmy and I are 100% supportive of him pursuing his dream.”

(Draft projections – still admittedly early – have Burrow going very high in the draft, even as high as number one.)

During games, Robin admits to getting “a little nervous and anxious.” Naturally, she’s also concerned about her son getting hurt.

“As a mother, I guess I do worry about injury at times,” she said. “But overall, I am not worried about it. I know that there are risks that go along with the game, but it is the game that he loves, so we have to take the risks with the rewards.”

After a week off and what Jimmy called “a much-needed break,” Joe’s mom and dad will be on the move again for that big game in Tuscaloosa.

The proud parents will be rooting from the stands, and Joe Burrow fans here and elsewhere hope they will have lots to cheer about.