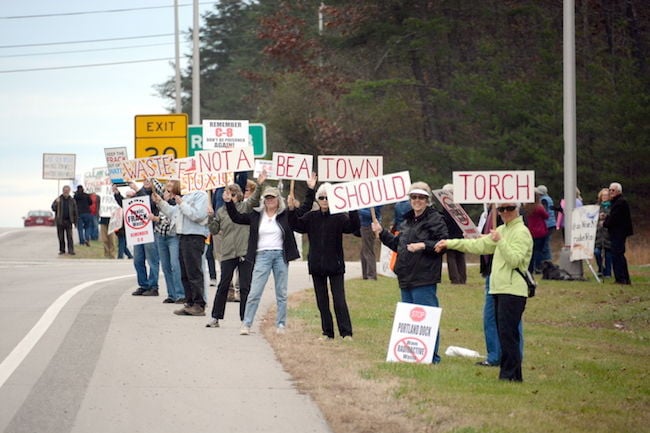 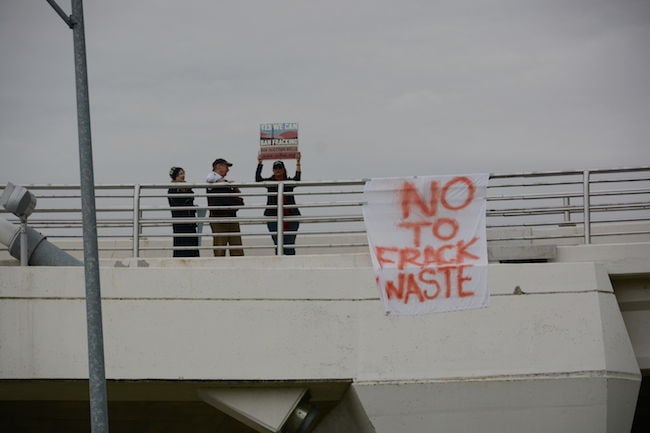 Fracking protesters hold  a sign after hanging a banner from a bridge near the proposed Portland injection-well dock in Meigs County on Tuesday.

Fracking protesters hold  a sign after hanging a banner from a bridge near the proposed Portland injection-well dock in Meigs County on Tuesday.

Around 40 protesters waived anti-fracking signs Tuesday at U.S. Rt. 50 highway drivers, with many honking in support, as part of a national day of action meant to call awareness to the oil and gas horizontal hydraulic fracturing industry.

The protesters were gathered at the rest area off the highway near Torch and Coolville in southeast Athens County, about 500 yards away from the K&H fracking waste injection well site up a nearby hill and beyond the trees.

Frances Spencer, from Coolville, said that she attended the day of action not only to raise awareness but to “get rid of them, if we can,” referring to the two K&H injection wells on the site.

“I’m older, and the impact of all this taking place, it might not affect me but what about the next generation? The little ones? I’m worried about the little kids,” she said. “What are they going to have to live with if we don’t fight this and get rid of it?”

Zella Nisley, also an Athens County resident, cited a vast quantity of trucks dumping waste at the site, and fumes emitted from the injection-well operation.

“The people who live in this area are hugely impacted by the fumes, the fear of what it’s doing to their water, and a huge, huge inconvenience,” she said. “Our fear is, how much can you put into one area in terms of quantity and not have something bad happen? We know what’s being injected in there is not a substance that’s safe.”

Felicia Mettler, who grew up in the Torch and Coolville area, and whose mother-in-law lives over a ridge from the K&H site, said that residents have had noise pollution, noxious odors, shaking ground, damaged roads and constant fracking-waste truck traffic.

“It’s obvious. It’s not just sitting there being quiet,” she said of the well site. “Constant trucks, all night long. And Sundays are the worst.”

Mettler said that Ohio needs to change its laws to hold oil-and-gas companies accountable and to effectively regulate the industry. She said that the K&H site is one of the largest in Ohio, yet no air or water monitors are set up to check for contamination.

“As a regulatory agency, we are committed to enforcing the rules and regulations to protect the public health and safety of our Ohio residents,” Simmons has said previously.

Oil and gas industry experts also have noted that the injection wells are deep enough to prevent contamination of groundwater, and that the well casings, as a result of state regulations and structural integrity, disallow fracking wastes from breaking through on the way down.

METTLER, DURING Tuesday’s protest compared the injection well situation in the Coolville-Torch area with DuPont and C-8.

“We have reason to be gravely concerned,” she said. “They say that it’s safe but to people who are raking in billions of dollars and say that it’s safe, I don’t trust them, especially after what this community went through with the C-8.”

The was a reference to contamination of drinking water in Mid-Ohio River Valley communities, including Coolville, with the chemical C-8 at the hands of the DuPont company and its major complex across the river in Washington Bottoms, West Virginia. That contamination has resulted in 15 years of litigation and around 3,5000 personal injury lawsuits.

An Athens County woman was recently awarded $1.6 million by a jury in a bellwether case for those lawsuits after contracting kidney cancer attributed to the C-8 contamination.

Mettler said that in the DuPont C-8 case, it was one chemical leaking into the Ohio River.

“That facility up there from the fracking injection wells, when they actually frack, it’s 1,100 chemicals that they shoot down into the ground,” she said. “When it comes back up, they ship it to facility sites just like this.”

Mettler said that air and water monitoring is the least the state can do.

“If we can’t stop them, if we have to live with it, protect us,” she said.

Susie Quinn lives less than a mile away from the K&H site. She said she has noticed noise, traffic and fumes.

“We’ve lived there 20 years, and we’ve never had odors like we’ve had since (this facility) came here,” she said.

Quinn noted that most residents of Torch use wells for their household water.

“The ground is going to reach a capacity of how much it can hold and then the injection waste is going to come up the path of least resistance,” she said. “They’re probably going to be one of the first places where the fluid comes up, all through town. We have no guarantees.”

Quinn also pointed to continuing worries after the C-8 contamination.

TRUCKS, CARS AND OTHER PASSING vehicles regularly honked in support at the protesters waiving signs that read, “Brine is not benign,” “Only you can prevent faucet fires,” “Don’t frack our future,” and “Clean water not fracked water.”

A Sheriff’s Office deputy arrived in the afternoon to watch the protest from a nearby parking lot but did not attempt to stop or arrest any of the protesters.

The protesters were planning to head to Meigs County later in the day to protest a dock being constructed to accept fracking waste from barges on the Ohio River. The company behind that facility is currently hemmed up in a battle with the U.S. Coast Guard over whether that waste will be allowed to be barged.

Bob Berardi, of Meigs County, has been outspoken in opposition to that facility.

At the protest Tuesday, he said that people are concerned that the local water supply will become contaminated for a very long time due to the injection activity, charging the presence of radioactive substances in this fracking injection wastewater.

“Even if it wasn’t for the 620 different chemicals that we know are in fracking wastewater, the radioactivity alone would be concerning,” he said. “We’re concerned this is a legacy that we’ll leave for our children and in the process destroy property values for people who have invested their whole lives into this part of the country.”

The world is flat!!!

And, of course, everyone knows that Mr. Yerian is the center of the universe.

Based on junk science and fear mongering. This kind of left-wing crusading is why SE Ohio is one of the poorest places in the country. The harm done to the environment producing your Prius and your Solar and Wind power infinitely outstrips anything related to fracking What a joke.

If the brine is so safe why does pa ship it all to Ohio?. They even did so when fuel was a lot higher in cost than it is today. Makes no sense to dedicate all those trucks people and fuel to ship harmless water several hours away? Just to have them return to pa empty to get filled and then back our way. It doesn't make sense.

Been asking this very question for years and I haven't heard a single retort. Pa landowners make so much money off gas and oil that they can pay through the nose to get rid of this innocuous brine they don't want buried in their back yard. Meanwhile, Ohio takes pennies on the barrel to bury this potential liquid time bomb.

When that failed, all they had left to stand on was economics. Ohio has made it less expensive to dispose of waste in Ohio rather than Pennsylvania, despite the extra fuel, labor and equipment costs to do so.

And should GreenHunter Energy ("a diversified renewable energy company" - [thumbdown] Bu....it!) gets its Meigs County barge facility permit, increased fracking waste disposal in SE Ohio will be securely cemented in for decades, as Columbus will continue to insure economically advantageous disposal costs (to be read "excessively low"), in order for GreenHunter to recover its investment.

The only way to keep waste in the same locale as it's generated is for Columbus to match Pennsylvania disposal costs, which would tip the economics in favor of frack waste being "disposed" of where it's generated, rather than being exported.

It gets even more convoluted as Ohio itself has a share of the fracking "boom," with Columbus feeling the need to insure low disposal costs to maintain growth of Ohio's share of the industry.

There are only two answers that are moral, principled and ethical in the matter of fracking waste disposal. The first would be legislation that prevents frack waste from being exported more than "X" miles from its point source. The oil and gas industries don't care for that, as it would force them to pitch hundreds of battles, rather than conduct one continual lobbying session with state legislators and regulators.

The second answer is to recycle the waste on site, re-using the fluids in the next well to be drilled. But that brings into play the higher costs of conforming to state, federal and local regulations relative to the handling of hazardous waste, some of which is inevitably sedimentary and suspended solids.

Therein lies the rub. It's presently more cost effective to export the waste to SE Ohio and parts unknown than it is to recycle. Throw in the accounting costs of hazardous waste management and disposal and it's even more economically efficient just to dump it all down a hole in someone else's back yard.

It's entirely a matter of economics, laziness and lack of enough forward thinking on the part of legislators and industry, laced with an unhealthy dose of almost universal social indifference.