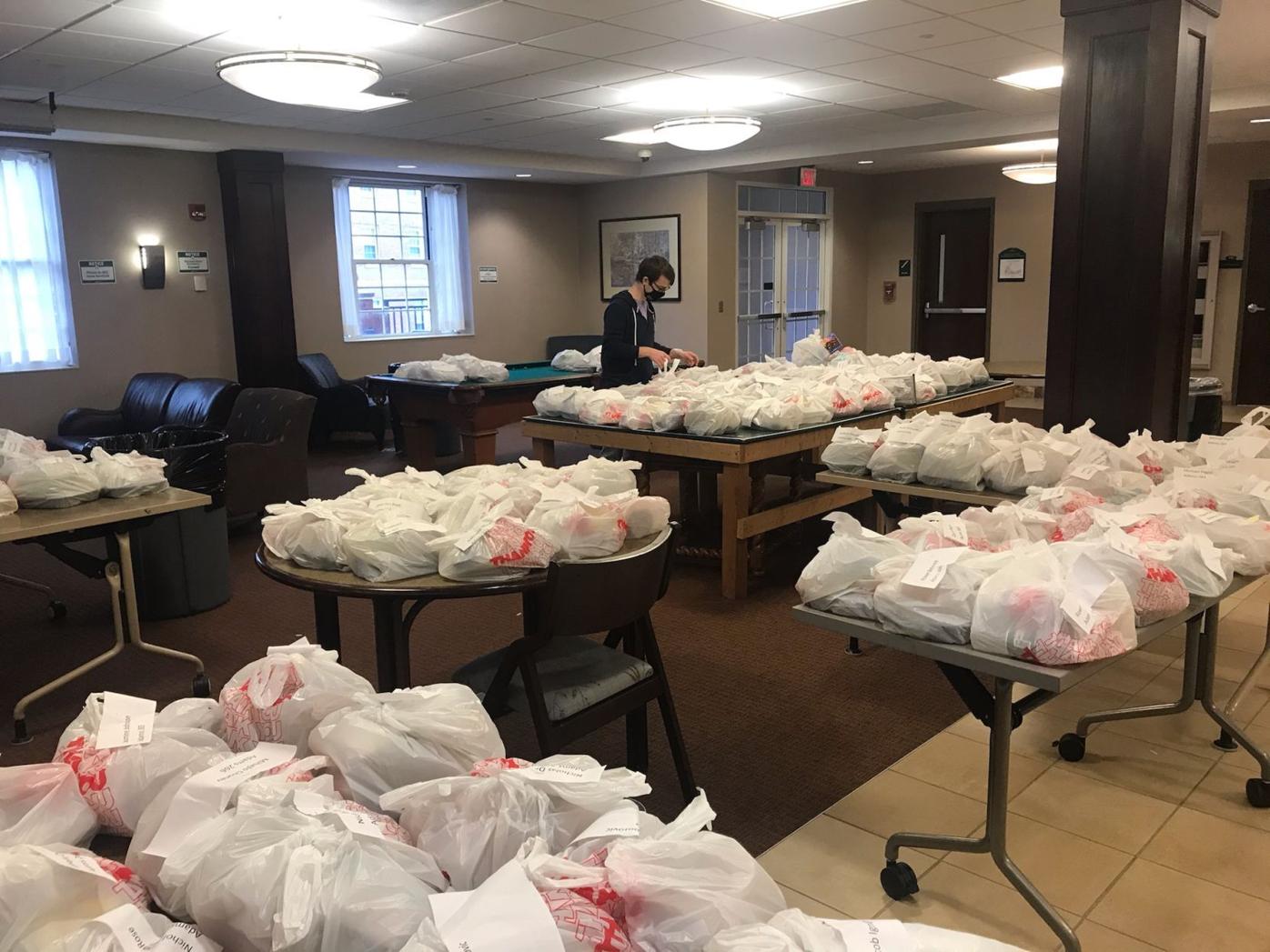 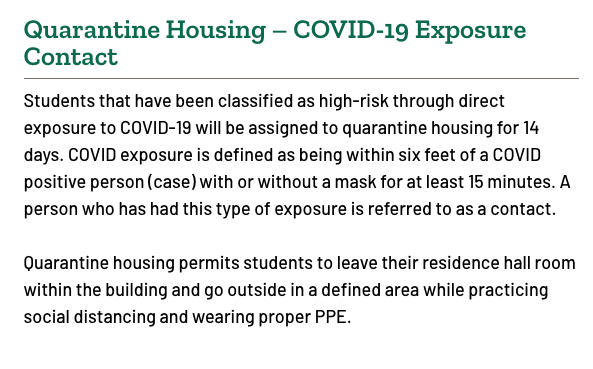 This screenshot was taken from the university’s Quarantine and Isolation housing website and reflects its policy prior to the Oct. 22 meeting with the Athens City-County Health Department.

This screenshot was taken from the university’s Quarantine and Isolation housing website and reflects its policy prior to the Oct. 22 meeting with the Athens City-County Health Department.

Ohio University students residing in quarantine halls, dorms set aside for students who tested negative for the coronavirus following an outbreak in their on-campus residence hall, were permitted for a time to exit the building for outdoor recreation, a policy in violation of pandemic public health orders and in contradiction to OU’s student housing contract.

A university spokesperson confirmed that students were initially permitted “to take solo walks for a limited time, within a limited distance while using PPE and following public health guidelines.” The university, however, did not enforce a time frame for those outings or provide a cap on how many times students were permitted to exit a quarantine hall. An OU student confirmed with The Athens NEWS that students under quarantine on campus did leave their buildings for recreational purposes.

OU noted that it was originally under the impression that students under quarantine could exit the building in a limited capacity. According to a version of the university’s quarantine and isolation housing webpage, students under quarantine were permitted by the university “to leave their residence hall room within the building and go outside in a defined area while practicing social distancing and wearing proper PPE.” That webpage has been amended to remove the advisory.

“The health department and Ohio University officials are on calls/meetings together nearly every day at this point,” Pepper said in an email. “During one of those meetings on Tuesday afternoon … questions regarding isolation and quarantine parameters were discussed.”

He noted that following that discussion, “the University made adjustments to their policy to conform to isolation and quarantine requirements.”

“Like most of our peers across the county, Ohio University’s response to the pandemic continues to evolve based on guidance from public health experts at both the state and county level,” OU spokesperson Carly Leatherwood said in an email. “Based on recent conversations with the Athens City-County Health Department, the University has determined it is necessary to update protocols for students living in quarantine or isolation housing.”

The change in protocol in regards to quarantine housing was also noted by Dr. Gillian Ice, special assistant to OU President Duane Nellis for public health operations and a Heritage College of Osteopathic Medicine faculty member, in her weekly public health update.

“We initially believed it was permissible for those in isolation or quarantine to leave their rooms to get moderate exercise outdoors,” Ice said. “Public health orders are actually more stringent and do not allow for this. “We all continue to learn and adapt as the pandemic progresses. We understand that public health rules for quarantine and isolation can be hard to follow.”

Per the Ohio Revised Code, an individual ordered under quarantine by a local or state health department can face legal consequences if found violating the order. Students entering into quarantine and isolation residence halls were tasked with signing an agreement with OU’s Department of Housing and Residence Life, which stated consequences could result from leaving a quarantine or isolation hall. As previously reported by The Athens NEWS, students under quarantine or isolation could be criminally charged if they leave their assigned residence hall before the date prescribed to them, with few exceptions, according to the agreement students signed within their housing contract. Quarantined or isolated students who are not under an order from the health department found in violation of the agreement could be barred entirely from residence halls after they’re released, according to a copy of the agreement obtained by The NEWS.

The health department did not respond to a request for comment at the time on what specifically students who disobey its orders could be charged with. The university may track swipes of students’ key cards to monitor whether they violated quarantine or isolation. Students in lockdown will only be able to swipe into their assigned residence hall, Hudson Hall — where Campus Care is located — or another on-campus testing site. Their cards won’t allow them to swipe into any other university facilities. Students can’t leave their rooms unless they’re using an assigned restroom or to get food, according to the agreement. In some instances, a case manager assigned to students through OhioHealth may instruct them to leave their room in the event of an unanticipated circumstance, such as a facility issue, Leatherwood previously said. The university may also direct students to be tested at a location on campus and require them to move from a quarantine hall to an isolation dorm if they receive a positive result, the agreement said.

“The intent is to have the ability to limit the number of times a student is permitted to leave and to outline who has the authority to give exceptions to leaving one’s room,” Leatherwood said last week, despite the university not putting time limits on students’ outdoor recreation.

Once students receive a verbal or written order from the health department that they’re authorized for release from isolation or quarantine, they’re required to contact their OhioHealth case manager to complete an online form providing proof of the order. Students aren’t permitted to leave until the university receives evidence of an order in writing, according to the agreement. Quarantine and isolation buildings have no resident assistants, but students are instead given contact information of an on-call staff should they need assistance. Students are also prohibited from allowing guests into their residence halls.

A social gathering of about 30 people in Luchs Hall, which is currently isolation housing for COVID-19 positive students, sparked an investigation on Oct. 17 after a resident assistant entered to assist a student who was locked out of a room.

Students in Boyd Hall vacated that building on Oct. 9 to enter quarantine or isolation housing. Days later students in Jefferson and Tiffin halls vacated their rooms and were placed under quarantine on Oct. 13.