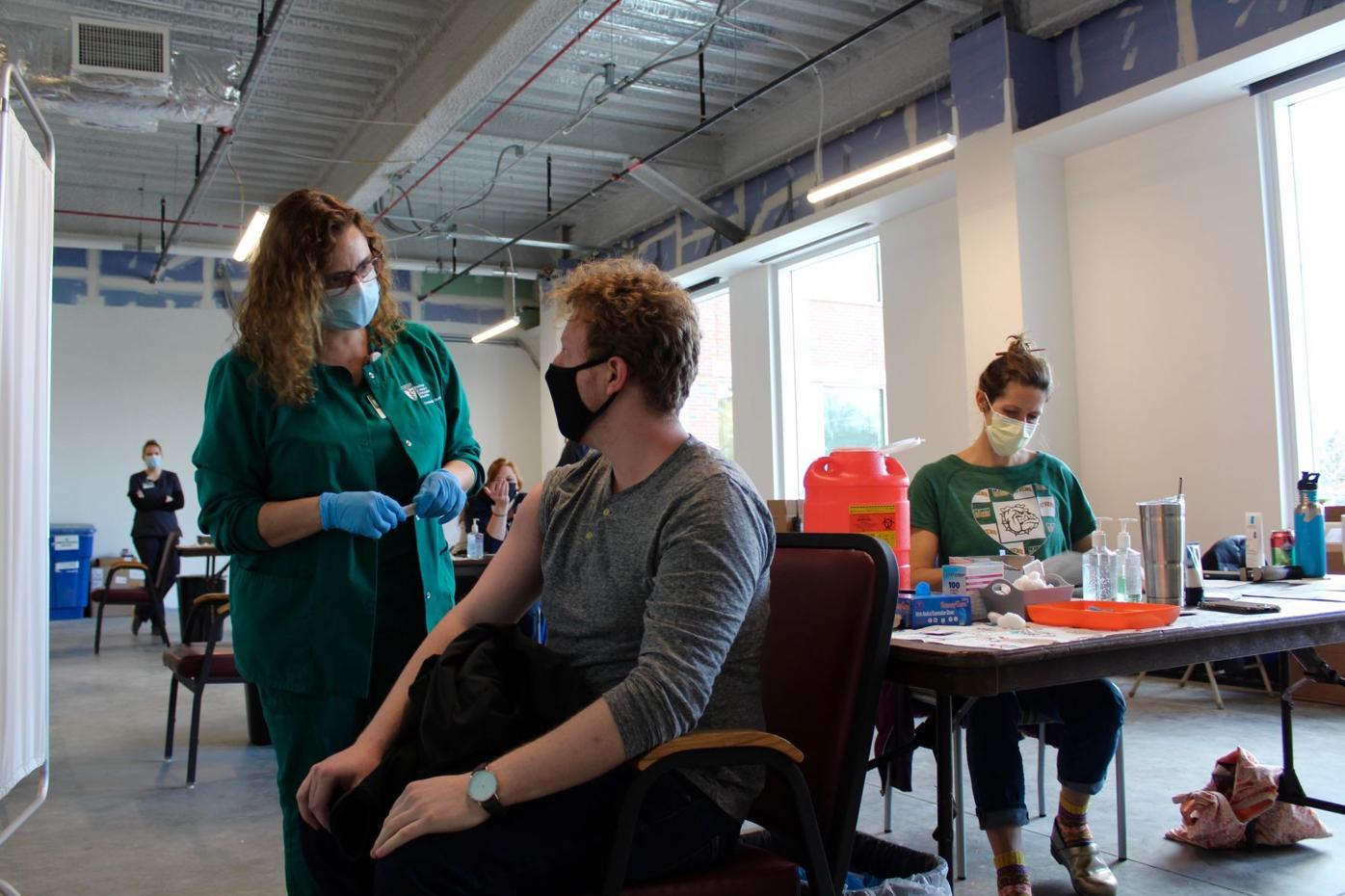 A patient talks to a vaccinator at Friday's vaccination clinic at Heritage Hall. 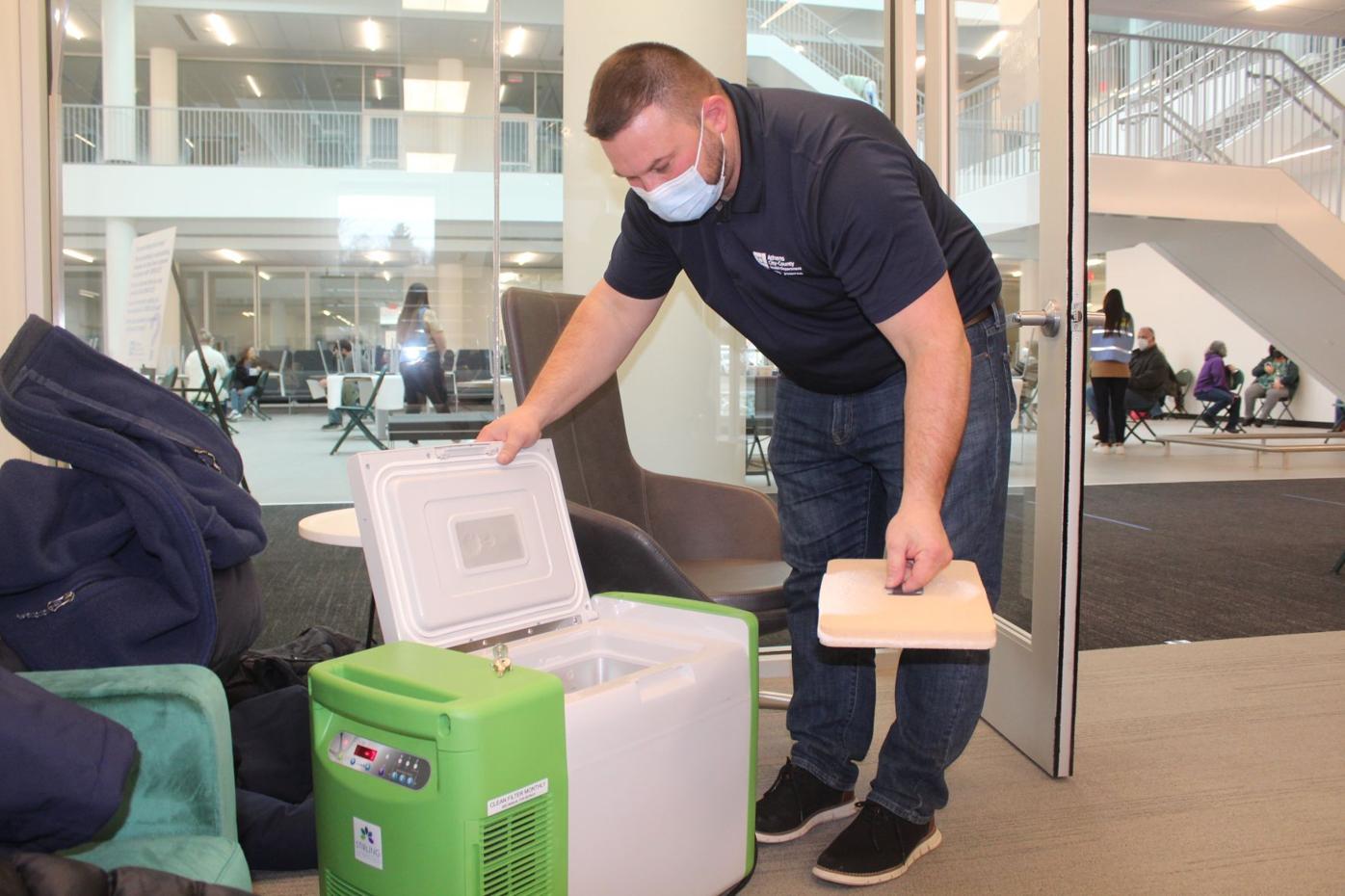 Health Department Administrator Jack Pepper opens the portable ultra-cold freezer used to store vaccines. The freezers were produced by a company in The Plains, Sterling Technologies.

A patient talks to a vaccinator at Friday's vaccination clinic at Heritage Hall.

Health Department Administrator Jack Pepper opens the portable ultra-cold freezer used to store vaccines. The freezers were produced by a company in The Plains, Sterling Technologies.

Friday marked the first day of vaccinations of the county’s K-12 school staff, and the Athens City-County Health Department reported that nearly 1,200 adult staff members across the county came to clinic held at Ohio University’s new Heritage Hall building on West Union Street to be immunized.

The vaccination clinic is part of a partnership between the Athens City-County Health Department (ACCHD), OhioHealth and the university.

Vaccination in the new building followed a one-flow protocol, with participants entering the building from one side and making their way immediately to a contactless temperature checkpoint.

From there, participants moved down a hallway to register, and then went farther down to receive their vaccines in a room with socially distanced stations. Chief Medical Affairs Officer of Ohio University’s Heritage College of Osteopathic Medicine Dr. Ken Johnson said the vaccine clinics are a great fit for the new building.

School nurses from across the county assisted with last week’s vaccine distribution. Heidi Shaw, who serves the Athens City School District as one of its two nurses, said she was excited for her ability to help in the process and work with other school nurses in the county.

“They understand what an epic part of history this is, and they want to be a part of it,” Miller said.

In all, the process to receive a vaccine takes but 20 minutes, with majority of that time spent being observed post-inoculation.

Health Commissioner Dr. James Gaskell said that some people have confused allergic reactions to typical immune responses one receives after a vaccine.

Fevers or bruising and pain at the injection site, for example, are common after an vaccination. Anaphylactic reactions, though exceedingly rare, happen within minutes following an injection, Gaskell said. He carried an epi-pen in his pocket throughout the day, but didn’t have to use it during the Friday vaccine distribution.

Gaskell said that both the Pfizer and Moderna vaccines, both of which received emergency authorization by the Food and Drug Administration in December, have more than a 95 percent efficiency rate for people who take both doses.

The Johnson and Johnson vaccine, with authorization pending but expected in the near future, has an efficiency rate of a 66 percent; though, Gaskell said the vaccine has a high efficiency rate (85 percent) in terms of preventing hospitalization and death related to COVID-19. Under most circumstances, a vaccine with at least a 50 percent rate of effectiveness is considered adequate by experts.

Also on the horizon is a potential AstraZeneca COVID-19 vaccine. Gaskell nodded to more vaccines entering the market as a good sign in terms of continuing vaccine distribution, since more companies contributing means more shots in arms.

In his years in pediatrics, Gaskell said he saw the introduction and growth in popularity of many vaccinations, and with each new vaccination came some initial hesitance from families. However, Gaskell would encourage his patients to consider vaccinations. Years later, once prevalent diseases have now been contained.

"The vaccine is the only way out of the pandemic," Gaskell said.

Health Department Administrator Jack Pepper said that vaccine clinics have already serviced many older Ohioans living in Athens County, many of whom who have expressed joy and tears of relief after receiving their vaccine. He also hopes others will be as willing to consider the vaccination.

“If we’re going to get back to the remnants of normal, this is truly the method to get forward,” Pepper said.

Next steps of vaccine distribution announced for Ohioans