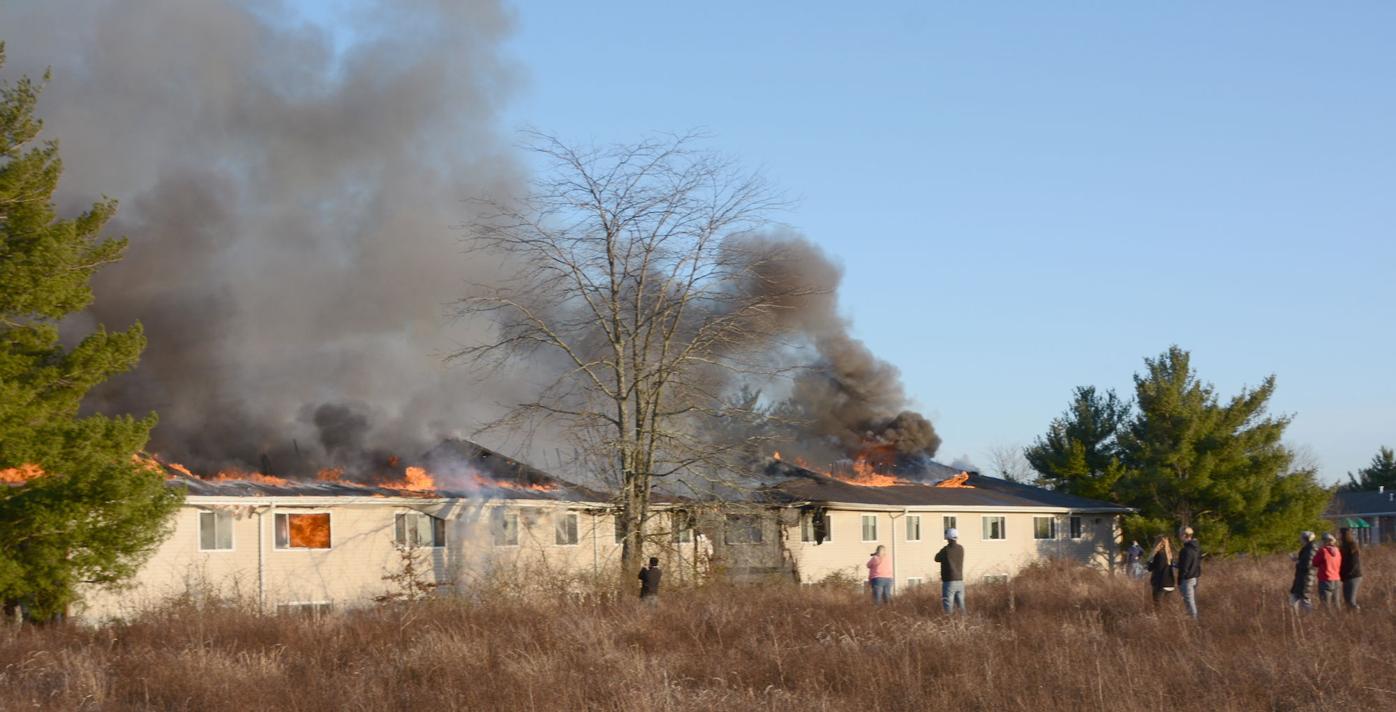 As residents and neighbors watch from a vacant field behind the structure, Building 12 at Carriage Hill Apartments is destroyed by fire late Sunday afternoon. The fire began in the center, thoroughly burned part of the building and quickly spread. 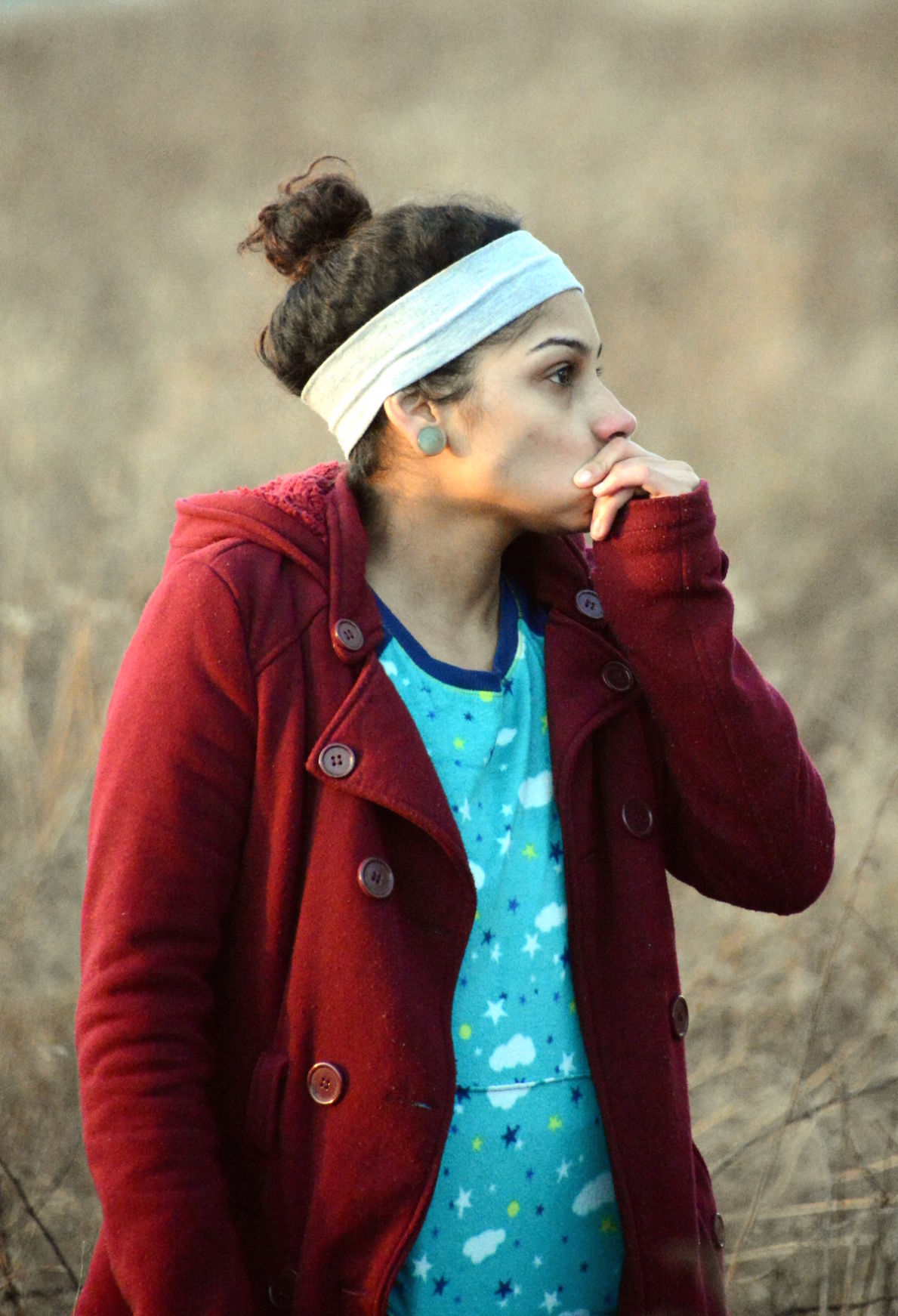 Gianni Lial, a four-year resident of Carriage Hill Apartments, looks on in dismay as her home and all her possessions are engulfed in flames late Friday afternoon. "I grabbed my iPad, but that's all I got" from her apartment, she said. 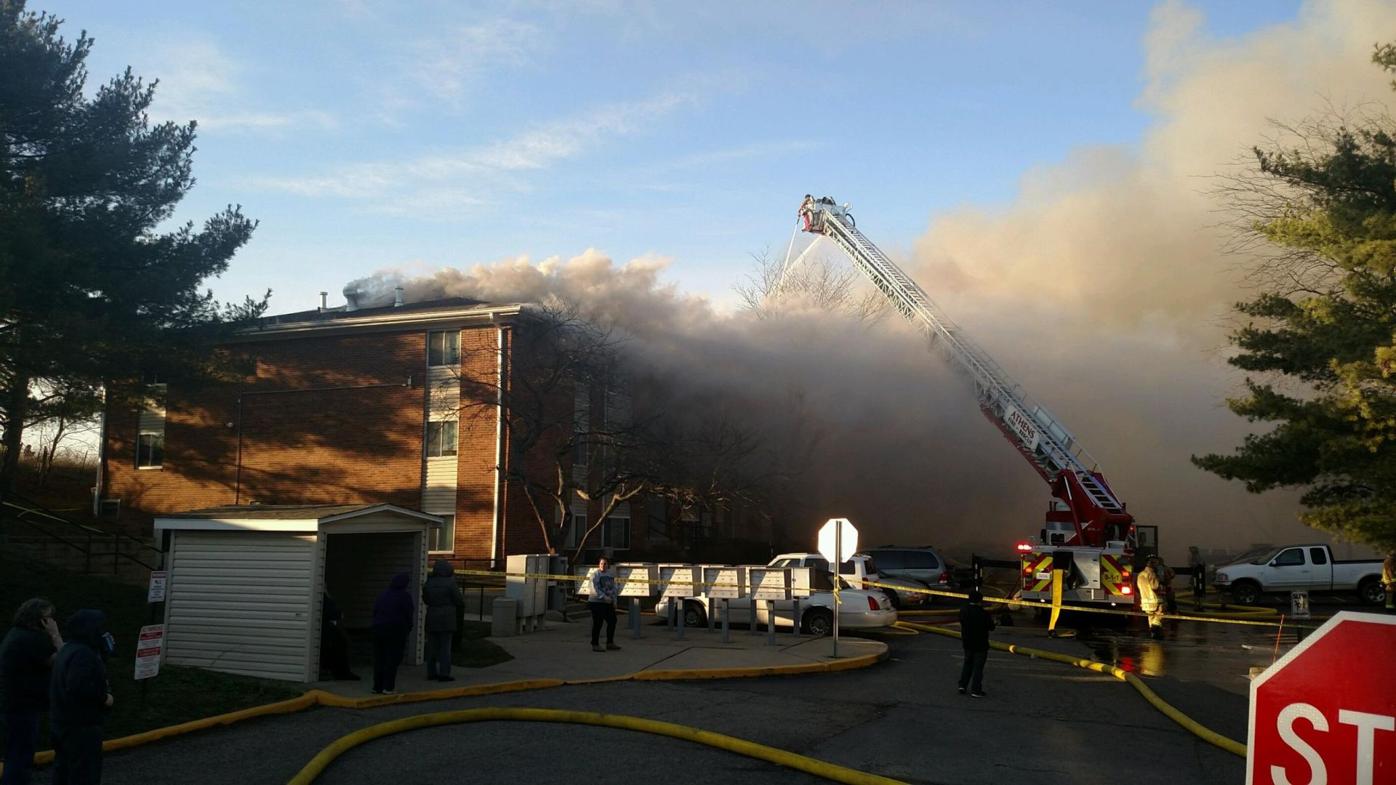 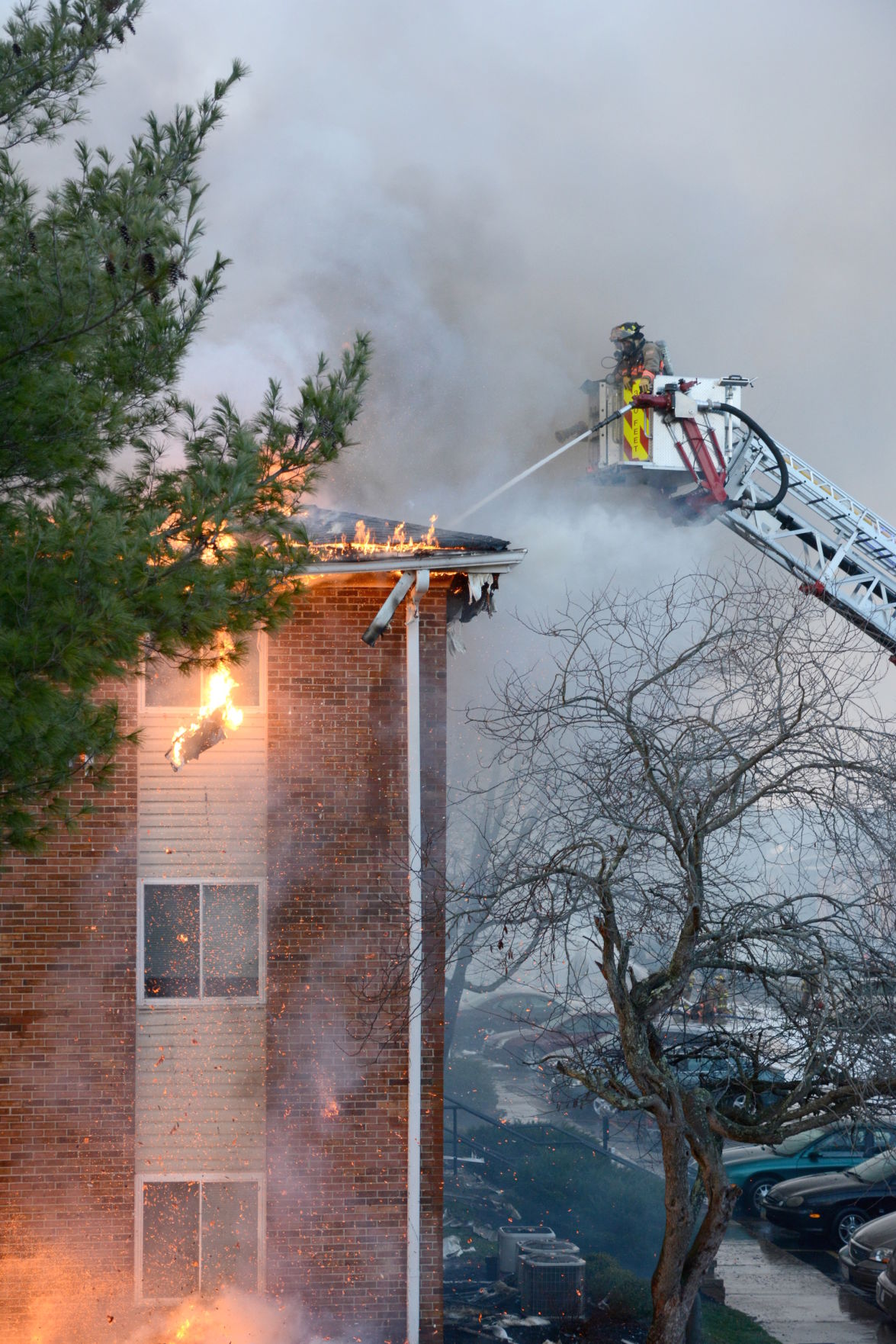 The burning eaves collapse and fall in a shower of sparks as firefighters train water on the south end of the burning apartment building on Carriage Hill in south Athens late Friday afternoon, Feb. 26.

As residents and neighbors watch from a vacant field behind the structure, Building 12 at Carriage Hill Apartments is destroyed by fire late Sunday afternoon. The fire began in the center, thoroughly burned part of the building and quickly spread.

Gianni Lial, a four-year resident of Carriage Hill Apartments, looks on in dismay as her home and all her possessions are engulfed in flames late Friday afternoon. "I grabbed my iPad, but that's all I got" from her apartment, she said.

The burning eaves collapse and fall in a shower of sparks as firefighters train water on the south end of the burning apartment building on Carriage Hill in south Athens late Friday afternoon, Feb. 26.

“We were asleep until the police knocked on the door and told us to get out,” said Gianni Lial, a 4-year resident of the building. “That was at about 4 o’clock (p.m.).” She, her two children, and two sisters and her boyfriend quickly fled.

“I was about to sit down to eat,” said her sister, Nashali Polanco. Both said there was no fire visible when they left the building.

But soon there was, as flames quickly spread through the top floor of the three-story structure. The fire apparently began at a heavily charred section at the center of the long building. It showed evidence of a particularly intense blaze.

As firefighters struggled against the stubborn fire, Athens Service-Safety Director Paula Horan-Moseley was on scene, getting in touch with the American Red Cross and other agencies to provide help for those who had lost their homes. “The Red Cross will be here soon, and we’re spreading the word to those who need it,” she said.

Deputy Service-Safety Director Ron Lucas said that Building No. 12, which is the one that caught fire, will be a total loss. The building has 30 units in it, according to Stephanie Tresso, spokesperson for Wallick Communities, the owner and manager of Carriage Hill Apartments.

Tresso said that 24 of the units in Building No. 12 were leased, and that 41 people were impacted. It appears likely from interviews on scene that more people than that were in the building at the time of the fire.

Early Sunday evening, the Red Cross was on the scene and Ohio University was also providing assistance. The fire is estimated to have begun around 4:15 p.m. in the area of the Building No. 12 rooftop, Lucas said.

Dan Pittman, Ohio University spokesperson, said early Sunday evening that the school is doing what it can to aid those affected. "Baker University Center will remain open through the evening to serve as a gathering space for those who were affected by the fire,” he said in an email announcement. "Housing and Residence Life is also working to provide any necessary assistance to those who were displaced; food, water and other items will be available at Baker University Center.”

It was not known how many of the displaced apartment dwellers are OU students, but many said they are not. Drop-off stations are available at Baker Center for those who wish to donate to those affected by the fire, according to OU's Alerts page.

Athens Mayor Steve Patterson had tears in his eyes as he surveyed the still-in-progress fire. “It’s devastating,” he said. “I’ve been through it and it’s devastating.”

He was a resident in an apartment building that burned in Grand Forks, Minnesota, in 1983, he said. That fire killed a 3-year-old boy. “His name was Winston. They lived in the apartment next to us.”

There were no immediate reports of physical injuries at Sunday’s fire here, but residents of the building were expressing sorrow in different ways.

“That’s my whole life in there,” wept Teddi Conway. “We were in Columbus and got home to – this.” A fourth-grade teacher in Marietta, her weeping grew worse when she realized she no longer owned clothes to wear to class Monday. She and fiancé Nick Schmidlin, an OU senior in wildlife biology, moved here from Bowling Green last August.

State fire marshals were on the scene, but there was no hint as to when the cause will be formally determined. Sometimes that can take months or longer, and in some cases, no cause is ever determined.

Carriage Hill Apartments has been a fixture on the hill overlooking Richland Avenue for more than 30 years.

Smoke and acrid-smelling steam drifted down the hill and across much of  Athens Sunday evening and could be smelled across campus and as far east as parts of East State Street.– Athens NEWS general assignment reporter Conor Morris contributed to this article.

Any word on the cause of the blaze yet? PS: Anyone who would like to assist the more than 50 people displaced from the 21 apartments, should contact the American Red Cross -Athens Chapter at (740)593-5273

I haven't heard anything yet, but never fear. The Ohio State fire investigators and Athens country prosecutor are on the case!