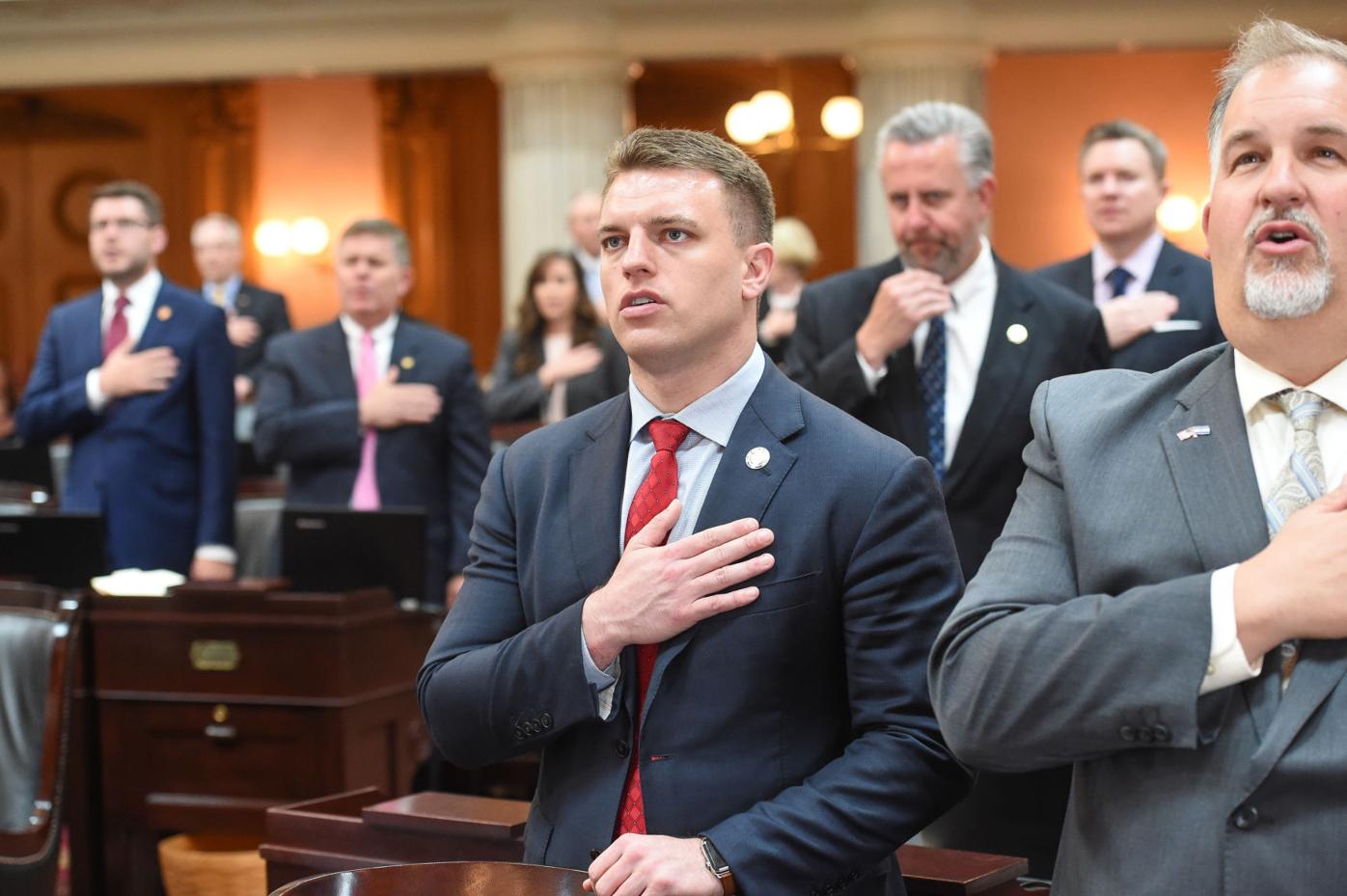 Jay Edwards during a House session in 2017. Photo courtesy of The Ohio House of Representatives. 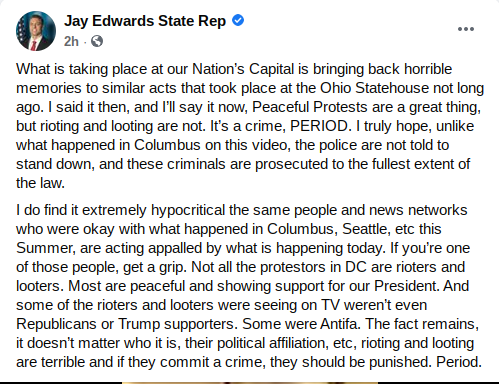 A screenshot of State Rep. Jay Edwards’ Facebook post in regard to the storming of the U.S. Capitol building on Jan. 6.

Jay Edwards during a House session in 2017. Photo courtesy of The Ohio House of Representatives.

A screenshot of State Rep. Jay Edwards’ Facebook post in regard to the storming of the U.S. Capitol building on Jan. 6.

Rep. Jay Edwards claimed without merit in a Facebook post that some demonstrators who took over the U.S. Capitol Building last week were affiliated with the far-left group antifa.

The FBI said in a news briefing Friday there is no evidence that antifa, an extremist group known for committing cloaked acts of violence and intimidation against their perceived political enemies, played any role in the storming of the Capitol. Most on Wednesday carried flags in support of President Donald Trump or wore nationalistic outfits.

Edwards did not respond to several requests for comment from either The Athens NEWS or The Athens Messenger seeking an explanation for his unfounded claim. His original Facebook post remains unedited.

The state representative, who shared his original statement Wednesday night hours after nearly every major elected Republican in the state condemned the pro-Trump rioters who broke into the Capitol Building, forcing a lockdown and obstructing the certification of President-elect Joe Biden’s victory, said the “criminals” who broke laws should be prosecuted.

“Peaceful Protests are a great thing, but rioting and looting are not. It’s a crime, PERIOD,” Edwards said.

But he was quick to defend most of those who marched on Capitol Hill, saying not all were rioters or looters and most were peaceful in showing support of Trump, who had been stoking the flames of division for months by wrongfully declaring the results of the November election fraudulent and repeatedly urging supporters to not accept its outcome.

The president, who encouraged his base in a Tweet to remain peaceful during the riot, in the aftermath continued to baselessly tell Americans in social media videos that the election was stolen from him.

Those clips have since been removed as Facebook and Twitter have both indefinitely banned the president from their respective platforms.

Last month, Edwards joined more than 40 Republicans in the Ohio House of Representatives in calling on Attorney General Dave Yost to join a now-failed legal effort on behalf of Texas to overturn the results of the presidential election in four key swing states. Yost ultimately opposed the suit and The U.S. Supreme Court flatly rejected it.

The former House majority whip also compared the violent demonstration in Washington D.C. to the many protests on Capitol Square in Columbus in opposition to Gov. Mike DeWine’s pandemic public health orders and the Black Lives Matter protests of this past summer.

“I do find it extremely hypocritical the same people and news networks who were okay with what happened in Columbus, Seattle, etc this Summer, are acting appalled by what is happening today,” he said. “If you’re one of those people, get a grip.”

Shots were fired inside the Capitol on Wednesday and at least five people were killed, including a police officer. Several rioters have since been arrested in the days following the event.

In April about 100 protesters loudly rallied outside the Ohio Statehouse and seemingly tried to gain entry into the building, according to The Columbus Dispatch. They could even be heard on TV during DeWine’s then-daily coronavirus briefings. There was no violence that day and nobody stormed inside of the Statehouse.

In May, The Ohio Statehouse had its windows destroyed by protesters who demonstrated in the aftermath of the killing of George Floyd, according to WOSU Public Media.

Protesters in Seattle, Washington claimed part of the city near downtown, which experienced several shootings, for some time this past summer in response to police killings of Black Americans. Protests in that city lasted for months.

On Saturday, he shared another post lashing out at the media again for what he called a “lack of consistency” in reporting on the Capitol Hill riot and the Black Lives Matter protests of the summer, while also failing to acknowledge his claim about antifa at the riot was false.

“It seems a few people are so caught up by me saying some of the rioters and looters were Antifa, they completely missed the point of the post,” he said. “It is obvious, based on their take of the rioting and looting that took place last summer versus their take on what took place two days ago, they are latching on to anything they can to divert attention away from their lack of consistency.”

Just in case anyone is still confused, raw video from inside the Capitol on January 6.

Antifa is NOT a "far left group". There is no organization called Antifa, nor are there leaders of Antifa. Do not treat the people who are anti-fascists with true neo nazis and white supremacists, like the "proud Boys" or the boogaloo idiots. Do your research Anews. Do not allow this paper to spread wrong information.

I do find it extremely hypocritical that Jay Edwards is okay with what happened in at our nation's capital on Wednesday, but was appalled at the events in Columbus, Seattle, etc. this summer.

From NY TIMES: “These Are the Rioters Who Stormed the Nation’s Capitol

The mob that rampaged the halls of Congress included infamous white supremacists and conspiracy theorists.”

Thats a Mature & Intelligent response you must be a delightful person.

Really Jay? Please, stop insulting our intelligence. The insurrectionists were clearly and unequivocally Trump supporters. No question. Elected officials, like you, who continue to propagate false narratives are unfit to hold public office. Please, resign.

Something stuck in your mouth?

Edwards is trying very hard to will this new theory into reality. I can hardly believe that the large mob of people, many wearing MAGA and QAnon attire and carrying confederate flags, Gadsen flags, Trump flags, were plants by the enemies of the right. More likely is that it plain as it can be: Trump called upon his followers to travel to Washington to rally against the electoral certification. At the rally yesterday, Gulliani and Trump made calls (some vague, some not) which the crowd, in their frenzied state after years of bull$#!+ misinformation and self radicalization, took matters to their logical conclusion.

Insurrection for any cause is wrong, period. No need to equivocate. Doing so only prolongs the pain and chaos.