The Athens County Commissioners on Tuesday visited the trailhead in Chauncey for the first part of the Baileys Trail System construction in the Wayne National Forest, even as two of the Commissioners said last week that they’re not going to support the “pay for success” model that has been asked of the county for the project.

Commissioners Chris Chmiel and Charlie Adkins said in interviews last week that they will not support the same financial model that Athens City Council approved in November to fund the Baileys Trail System, which includes an agreement to pay $90,000 per year for the next 20 years, or more depending on whether the project is more successful.

The decision from the Commissioners puts into question City Council’s agreement, which includes a clause that says that the city’s $90,000 per year contribution is contingent upon the county Commissioners agreeing to the same level of support.

Still, Chmiel and Adkins made it clear that they do support the project, and have earmarked $90,000 in this year’s county budget to help fund continued construction on the trail system, which so far has about 14 miles of trail in the Wayne National Forest, with its main trailhead in Chauncey.

Chmiel said this week that he hopes that City Council at least will agree to match that $90,000 for this year, so trail construction can continue.

Adkins said in an interview last week that he still has a lot of questions that haven’t been answered about the Baileys project.

ATHENS CITY COUNCIL voted unanimously in early November to enter into a contract with the Outdoor Recreation Council of Appalachia (ORCA) to pay $90,000 or more annually over the next 20 years to fund the Baileys Trail System. Project supporters have billed the 88-mile mountain-bike (and other non-motorized uses) trail system as the greatest hope for economic development in Athens County in many years, with some estimates from project planners suggesting as much as 180,000 new visitors per year for the trail system.

When meeting with Wayne National Forest officials prior to the hike on Tuesday, Adkins told WNF spokesperson Dawn McCarthy that he has a “hard time wrapping his brain around” that 180,000 number.

McCarthy acknowledged that that she, too, was initially skeptical about that number. However, she added, “We also think that the amount of economic value for the trails was being understated in that same feasibility study. Because I’ve seen (information suggesting) where 50,000 people (visiting) seems to bring in just as much money. I don’t know that 180,000 (visitors) is the thing to get all fixated on.”

McCarthy explained that the first 14 miles of trails completed so far are open to the public for hiking but not for biking (there should be an opening event for the community in Chauncey in late May this year, with a larger grand opening event planned next fall for the whole Chauncey-Dover Park). McCarthy added that there’s another project in the works that’s set to renovate that park, adding a central shelter house/stage, bathrooms and other amenities.

McCarthy added that if City Council agrees to match the Commissioners with $90,000 in funds this year, that “should be enough” to help complete “Phase 2” of the project, which proposes to extend the trail system to about 31 miles (out of 88 total).

Adkins during the trail meeting said he recently spoke with a local motel/hotel group, who told him the group’s members are not interested in raising bed tax rates to help pay for the project. That group also apparently told Adkins that the hotels and motels in the area are already “at capacity,” and would have trouble finding space for Baileys visitors.

McCarthy countered that many of the visitors likely would come during the summer months, when most Ohio University students are out of town and business lags. She added that OU’s declining enrollment in recent years likely will translate into more openings for local hotels/motels.

Adkins also asked about when larger numbers of cyclists could be expected to begin coming to Athens County, considering that the first 14 miles of trail are largely “beginner-level” (that’s according to McCarthy).

Local cyclist and OU grad student Chad Reich, who was present during the trail walk event, said he believes that a mix of expert- and beginner-level trails would attract large numbers of visitors, typically for big events like races and festivals. McCarthy said that most of the expert-level trails likely won’t be completed until the tail end of the trail construction project.

McCarthy provided a timeline of the construction work for the Baileys project Tuesday via email, which will be outlined below. In that document, she noted that at least at this time, there’s no guaranteed funding for the 73 miles of the trail project that have yet to be completed. Meanwhile, separate grant-funded work (from the Ohio Department of Transportation’s Transportation Alternatives Program) should begin sometime in July 2020 to construct an extension of the Hockhocking-Adena Bikeway to Chauncey. Further, grant-funded construction on extending that bikeway even further, from the Chauncey city limits to the Chauncey-Dover Park, should begin sometime in spring 2020. That project will involve construction of parking lots and other amenities at the park, as well as a bike lane, street improvements and sidewalks in Chauncey.

THE TIMELINE PROPOSED for the next steps of the Baileys trail construction are below:

• March 2020: Appalachian Conservation Corps to develop a trail-building crew with local young adults, with them getting on the ground sometime potentially in September 2002.

• March 2020: Baileys bridges purchased and installed on Phase 1 of the project (which completed this January).

• May 2020: HAPCAP to manage workforce opportunities through the “comprehensive case management employment program.”

• May 2020: Potential start of an “active strategies community activation campaign,” pending hiring of a new executive director for ORCA. 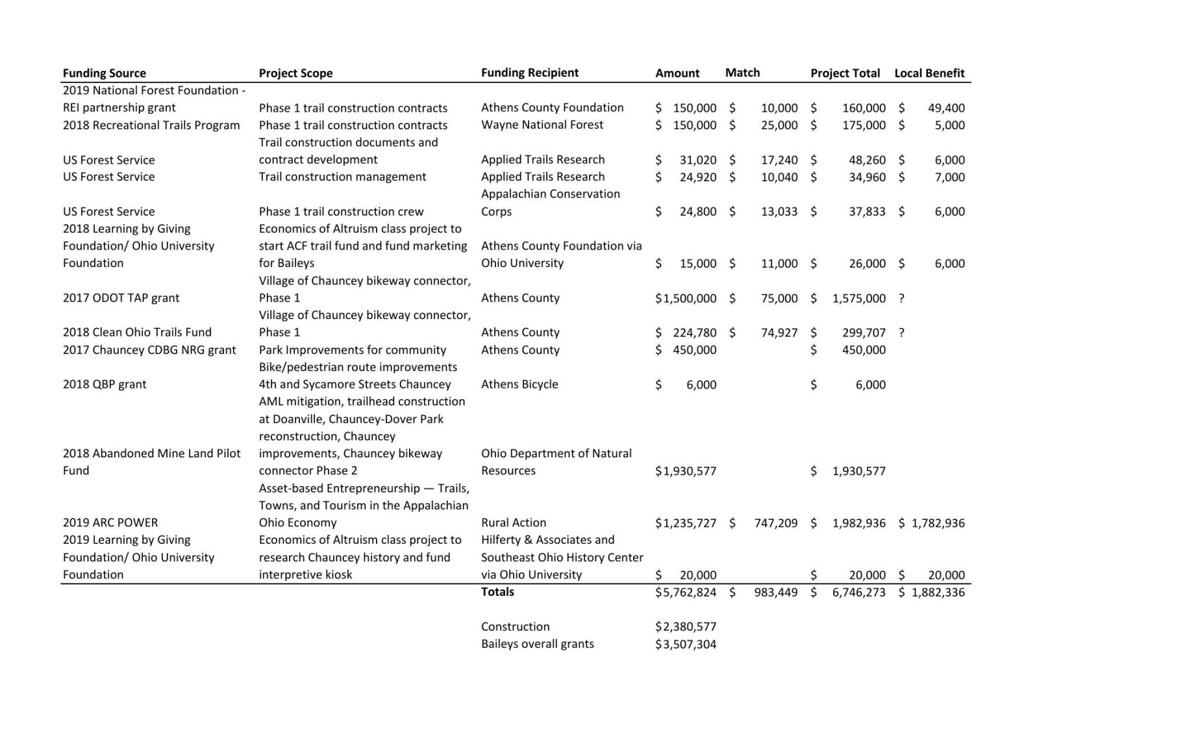 You can see a copy of a document provided by McCarthy attached to this story that explains the funding obtained for the Baileys and other related projects so far.

We were just asked by the county to raise the sales tax (defeated) because they were in desperate need of funds. Now they have $90000 to burn.

Yeah so now the 180000 riders turns out to be unnecessary because 50000 riders will spend as much as 180000 riders anyway. Ah ha ha ha ha ha ha ha!!!!!! This bike trail saga gets more unreal by the second. Let us review. The ORCA mob wants $180,000 a year from City and County combined, every year, for 20 years. The Athens tax rate is 1.25%. In order to break even, the bike trail would have to generate $14,400.000.00 in sales every year. For 50,000 riders, that means each one of them would have to spend $288 in Athens County. The only problem is, a search of the internet finds that only one of the top ten mountain bike trails reported the number of riders they get each year. The one that did spoke of 1700 riders in it's peak season. It is not that a bike trail is in itself a bad idea. What's bad is the ORCA hype that continues to be so glaringly out of touch with reality. The County Commissioners would be wise to vote no.

What is the projected cost per mile to build all of the remaining trails?

Typical construction costs for mountain bike trails are in the neighborhood of $3-5 per foot (that’s about $15 – 25K per mile) . That includes all the work to make the site shovel ready (design, survey, and environmental studies). According the Quantified Ventures, the Wayne has already paid the shovel ready prep ($750,000).

Why is the Wayne putting the screws to local government to pay more than $3.6 million?