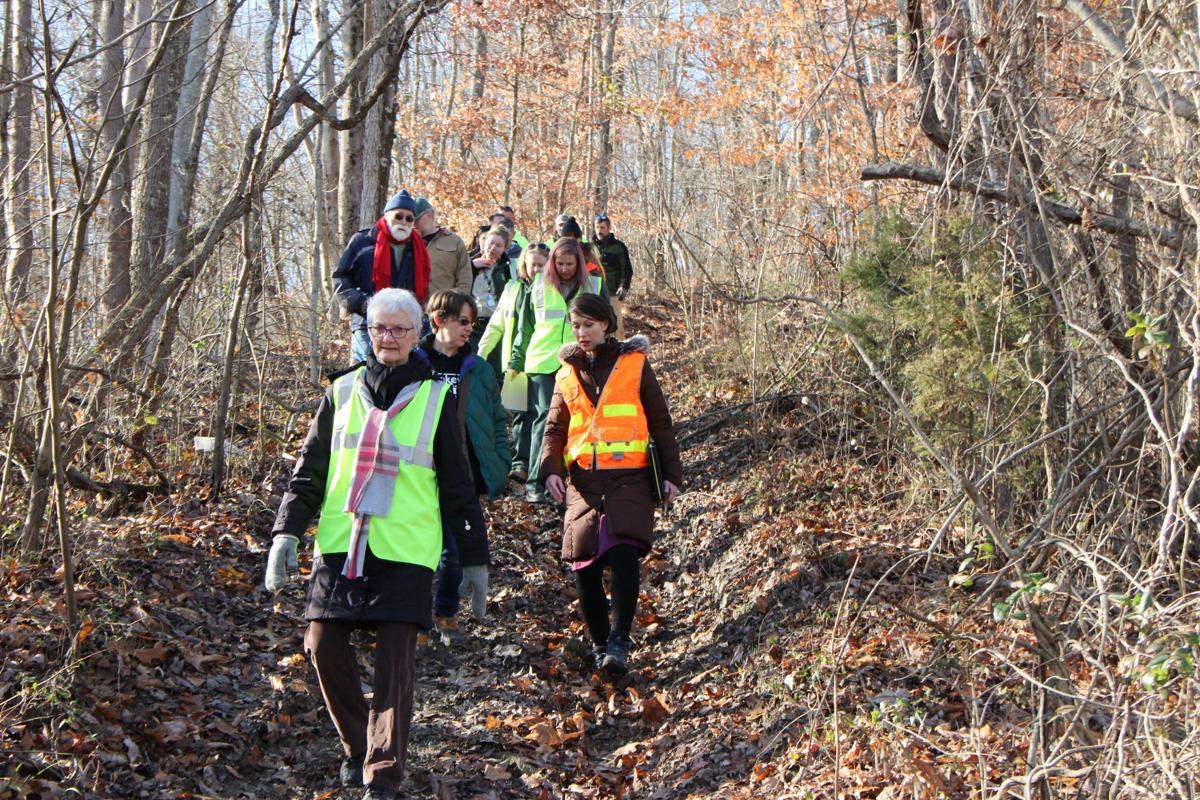 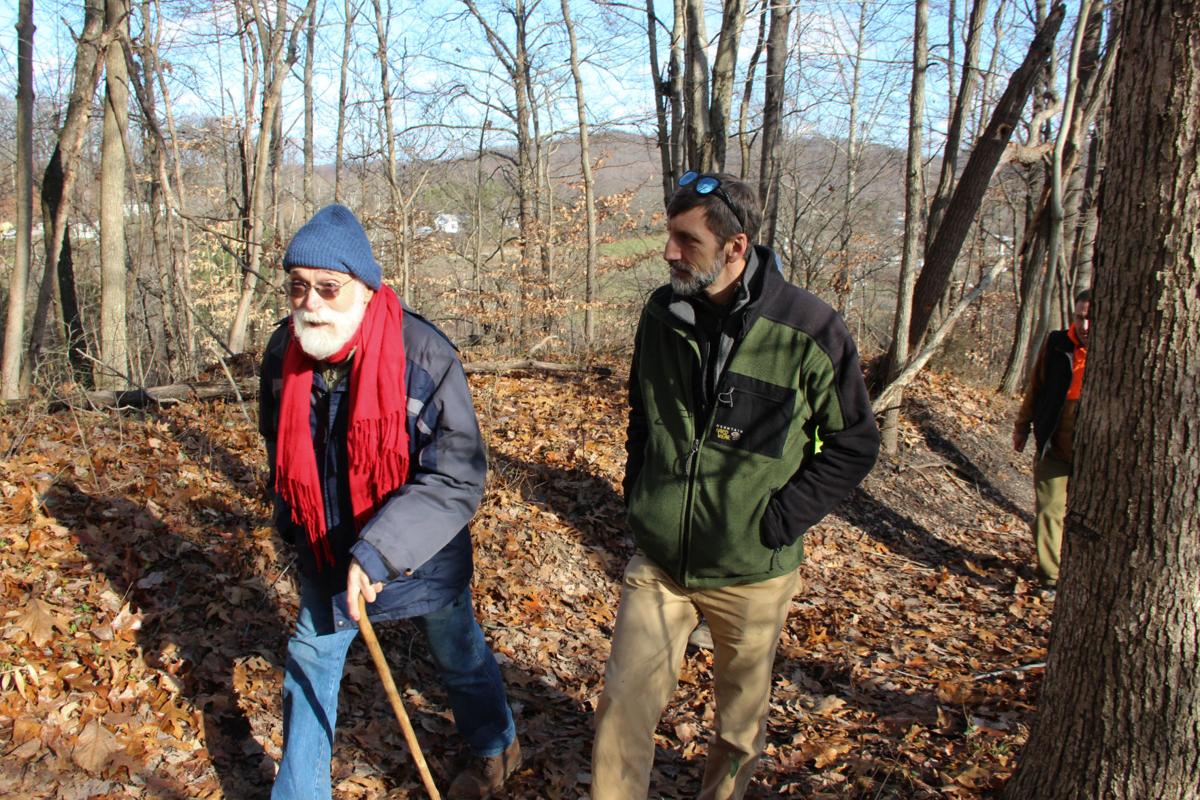 Athens City Councilmember Patrick McGee, left, and another man traverse and conversed on the Baileys Trail on Dec. 4. 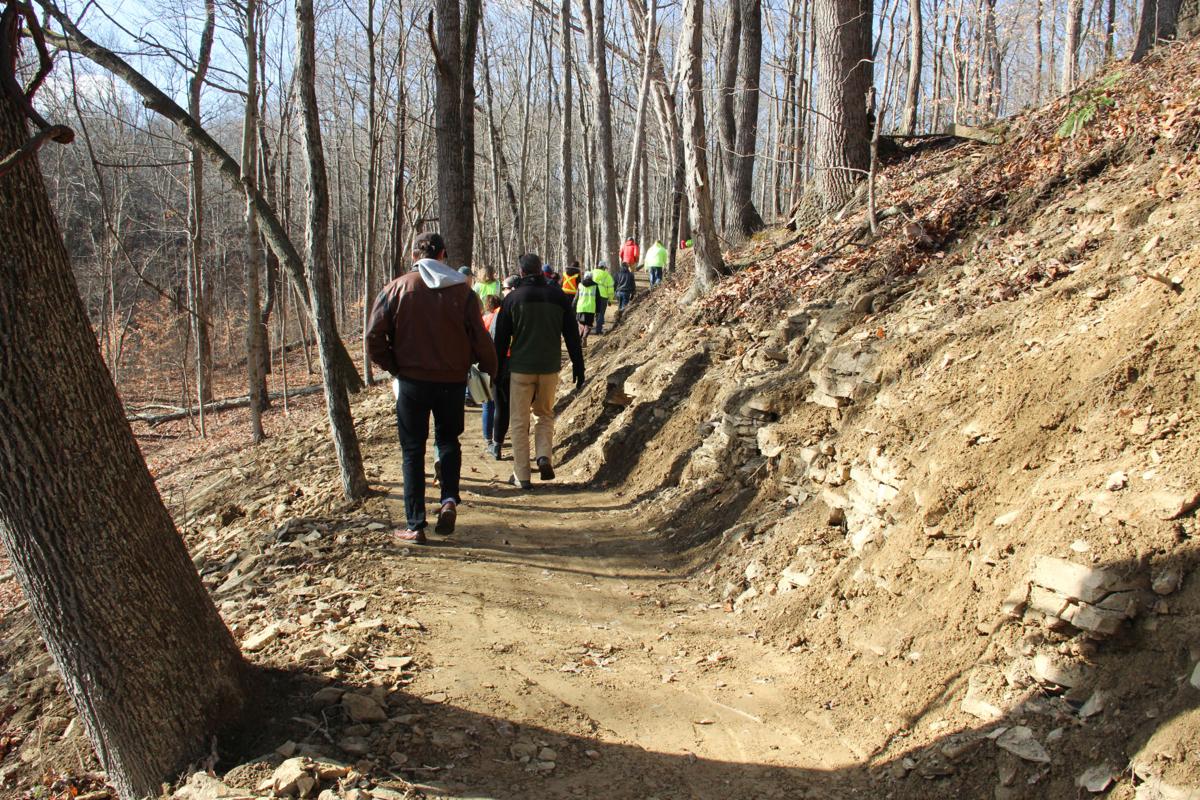 Athens City Council members and others hike across the soft soil on an in-progress Baileys trail toward the rumbling trail-building machines on Dec. 4. Photo by Emily Crebs. 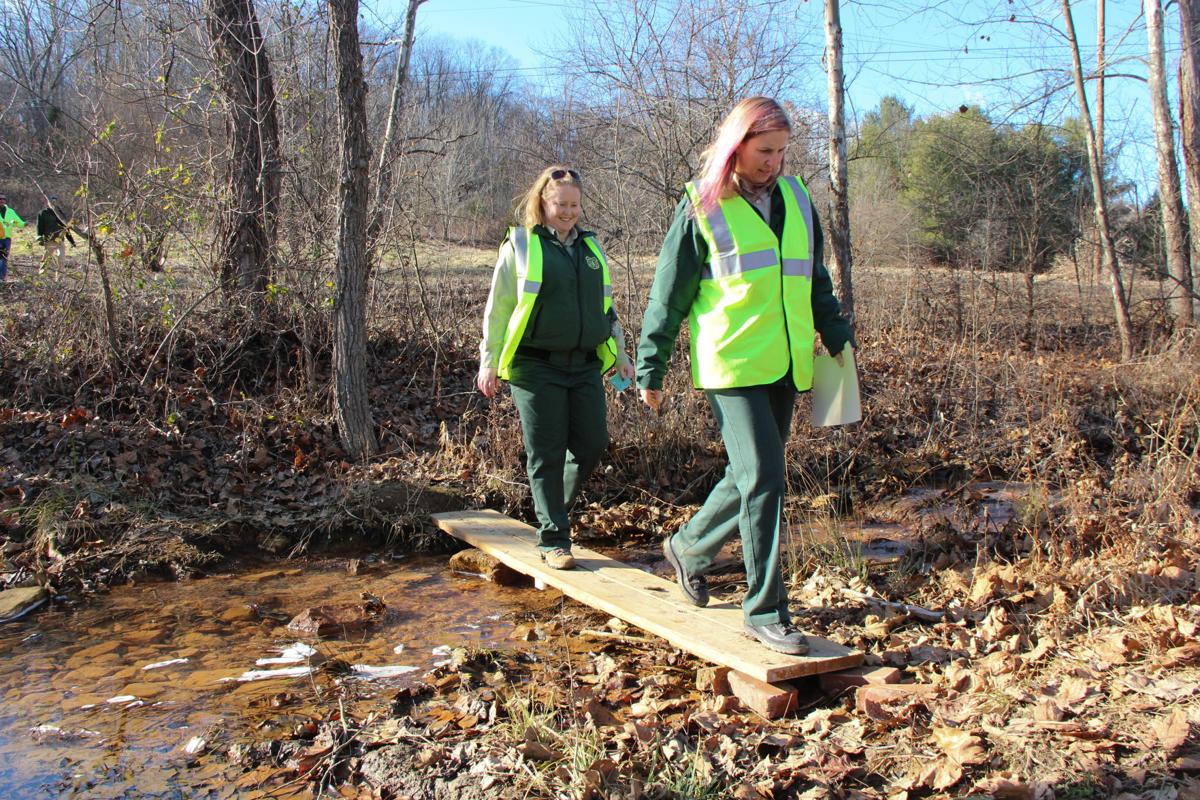 Wayne National Forest representatives walk across the plank leading from the Baileys back into Chauncey-Dover Community Park on Dec. 4.

Wayne National Forest representatives walk across the plank leading from the Baileys back into Chauncey-Dover Community Park on Dec. 4.

Members of Athens City Council met with leaders of the Baileys Trail System project last Wednesday, Dec. 4, at Chauncey-Dover Community Park, the site of the system’s Chauncey trailhead, to hike a newly built portion of the trail.

The visit came five days before Athens City Council voted Monday evening to commit a significant amount of financial support to the project – $90,000 per year for the next 20 years. (See story in this issue.) Under the ordinance as drafted, that total could potentially increase if the project performs better than expected, although the city can choose to end that financial support early. The County Commissioners are considering allocating a similar amount of financial support, though it’s unsure when they’ll take a vote on that issue.

City Council member Sam Crowl said last Wednesday that his understanding of the trail was greatly enhanced by the hike.

“We’ve been calling this a mountain bike trail system for a long time... but it’s not just that,” Crowl said. “It’s trails. Whether you’re a birder, or a hiker, or a mountain biker or just want to get away into the hills. It’s for everybody.”

Construction of the Baileys – planned as 88 miles of trails optimized for mountain biking but also for other non-motorized uses – broke ground in September, according to a previous report by The New Political.

At the beginning of the meeting, hikers enjoyed hearty “Baileys cookies,” and some wore neon vests while traversing the wooded area so that hunters wouldn’t mistake them for game. During hunting season, some hunters look for game on the Baileys tract of land, which is located on the sprawling Wayne National Forest.

Currently, to enter the trail, which is composed of soft clay soil, one must cross a creek on a wooden plank. Because of recent rains, hikers stepped carefully through the steep and muddy pathway, and trundled up a steep incline, with The New Political reporters being woefully underdressed for a romp through the woods.

According to Jeremy Wimpey, a representative of Applied Trails Research, an outdoor recreation firm, three crews are working on the trail, and he estimated 25 workers are involved.

Wimpey confirmed that community members have begun to use the trail. The trail builders also employ cyclists to test the trail’s quality. The portion of the trail starting from the community park will be designed to accommodate even entry-level cyclists and hikers.

Because of the Baileys Trail System, Chauncey has received funding from nonprofit organizations to create a spacious trailhead that can accommodate a large number of visitors.

The trail by the park is repurposed mining land. Athens County Planner Jesse Powers said that the Ohio Department of Natural Resources donated to Chauncey’s bike spur project, another trail project in the area, because they are repurposing the land.

One improvement to the park will involve creating a proper entrance into its parking lot. There is no “legal access point” to the Chauncey-Dover Community Park, according to Powers. To enter the park, one must take a sharp turn (left coming from Chauncey) from Ohio Rt. 13 onto West Bailey Road – next to railroad tracks – and drive on railroad property.

The New Political reporters observed the construction underway on the Baileys Trail System. Contractors using small excavator equipment dug away in the distance, and workers raked newly fallen leaves while the hiking party stopped to hear about the construction process.

The section of the trail toured was a portion of the “green trail,” or a trail for beginners that includes more gentle incline grades and a wider path than the more planned additions to the trail that feature more difficult terrain and trail conditions.

KEES VAN WEEL, A CHAUNCEY citizen and retired engineering technician for the Wayne National Forest, was walking his three dogs to the trail as the tour of the hike ended. He took the opportunity to express his displeasure with the project to the stakeholders involved with the planning and execution of the trail system.

“Thirteen years I’ve been walking along here, haven’t seen a mountain bike,” he said, though he then recalled seeing one “when there were roads and trails back up in here…

“Now you guys are in here making bicycle trails,” he told the stakeholders.

Van Weel said he frequently walks through the Baileys tract of land with his dogs. He expressed skepticism about glowing predictions about the trail system’s future popularity.

“We’ve seen too many things like this, expecting people to show up, and then in about five years the newness is gone and away you go,” he said.

Cole Behrens of The New Political contributed to this report.

"$90,000 per year for the next 20 years" equals $1,800,000.00. And that is just the City's part. Bailey's also wants the same amount from the County. That puts the tax payers' price tag at $3,600,000.00. So what you are really talking about here is the need to have 41,142 riders, each dropping $250 into County and City cash registers, each year, for the next 20 years, JUST TO BREAK EVEN. City Council Members and County Commissioners should exercise the "right of refusal" right now, or tender the resignations when they vote.

Crews are already working. When did this happen? Who is paying them and for what? I think the A-News is trying to tell us something.

Redray, There is a reason why those who ask reasonable questions about Baileys get no answers. It’s because nobody knows the answers. And rather than provide such an honest answer, they prefer to recite passages from what is now known as the Baileys Bible, replete with parables, psalms, stories of environmental bliss, along with eventual ascension into economic Nirvana.

City Council tabled the ordinance. They asked a question to which no one was able to provide any answer. All they received over a span of two weeks was an endless stream of repetitious recitals of all the previous projections and talking points. In light of no answer, a right of refusal amendment was drafted, passed, and the question kicked down the road. (Final nod of approval given next Monday, December, 9.)

But here’s the funny part. The numbers for all the visitor and revenue projections used to market and sell Baileys? They’re the exact same numbers needed to calculate Carbon Debt - which nobody wants to calculate or discuss because nobody trusts the projection numbers.

In the traditional manner of Athens shuck and jive (there’s a less polite word for this) the numbers can only be accurate when applied to a desired end. And as any calculation of Carbon Debt draws greater attention to how inaccurate the original numbers may be, Carbon Debt is trivialized, diminished, if not dismissed by many, or at best treated in a “we’ll burn that bridge when we get to it,” manner.

So there you have it, all these community stalwarts playing up economic stewardship, environmental responsibility and responsibility to future generations, when they can’t even or are entirely unwilling to tow the mark when it comes to honesty.

It gets very old watching adults pander like this. If they were their own children, they’d be sent to bed without desert, grounded, and their internet and cell phone privileges revoked until such time as they learned how to speak the truth.

Todd, you are right. It's Cheese Barn 2.0 all over again. The advocates don't care about the truth. There are already 239 Mountain Bike Trails in Ohio but heck, what does that matter if you build number 240 on abandoned strip mines with orange creeks in the thick of the undergrowth of clear cut second growth forests. I mean, why wouldn't 200,000 people drive hundreds of miles to wallow in such a wonderland? But wait, it's not just a bike trail anymore because it is also for people who walk their dogs, hikers, birders, hunters, all wearing neon vests so they don't get shot by accident. And don't worry about leaving your car or camper or campsite unattended while you bike or walk or hike or hunt the hills, because crime is virtually unheard of in that neck of the woods.

we.got.net/~landauer/mtb/Guelph_MTB_study.pdf This article is a study of the impact of Mountain Bikes on deciduous habitats. The damage is not severe but the damage lasts as long as the trail is in use. Plus, more damage occurs from "informal trails" (think short cuts) riders make for themselves to say, avoid having to go all the way to the top of a hill.

Just so you know. There are already 74 Mountain Bike Trails in Ohio, with two already in Athens County, one at Sells Park, the other at Stroud's Run. But, you know, I am thinking that none of the 74 Mountain Bike Trails already existing have parking for 200,000. So, in what part of the Chauncey "Trail Head" will you be putting the Cheese Barn?

Oh wait. I stand corrected on the number of Mountain Bike Trails already existing in Ohio. It is not 74,,,,,, it is 239.

Note to self ---- Give out "happy" cookies and promise the moon when I want the City and County to pay for my Frisbee golf course and water slide park.

I'm with Mr. Van Weel, he seemed to be the only one who spoke plainly and sensibly!

And now I see we're looking at an increased water and sewer tax which, in my opinion, is a reasonable request for necessary infrastructure improvements. I'd much rather see the $90,000 go toward that...

So when will Chauncey start installing their 200,000 parking meters?