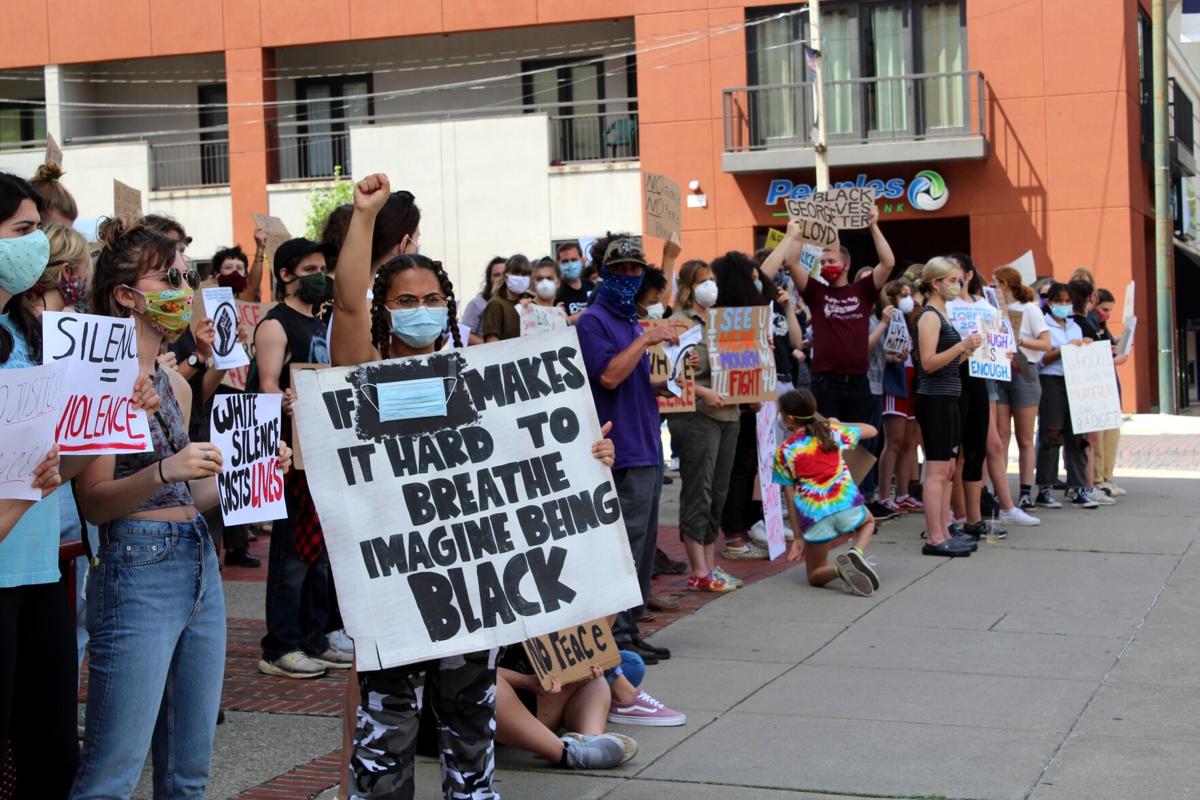 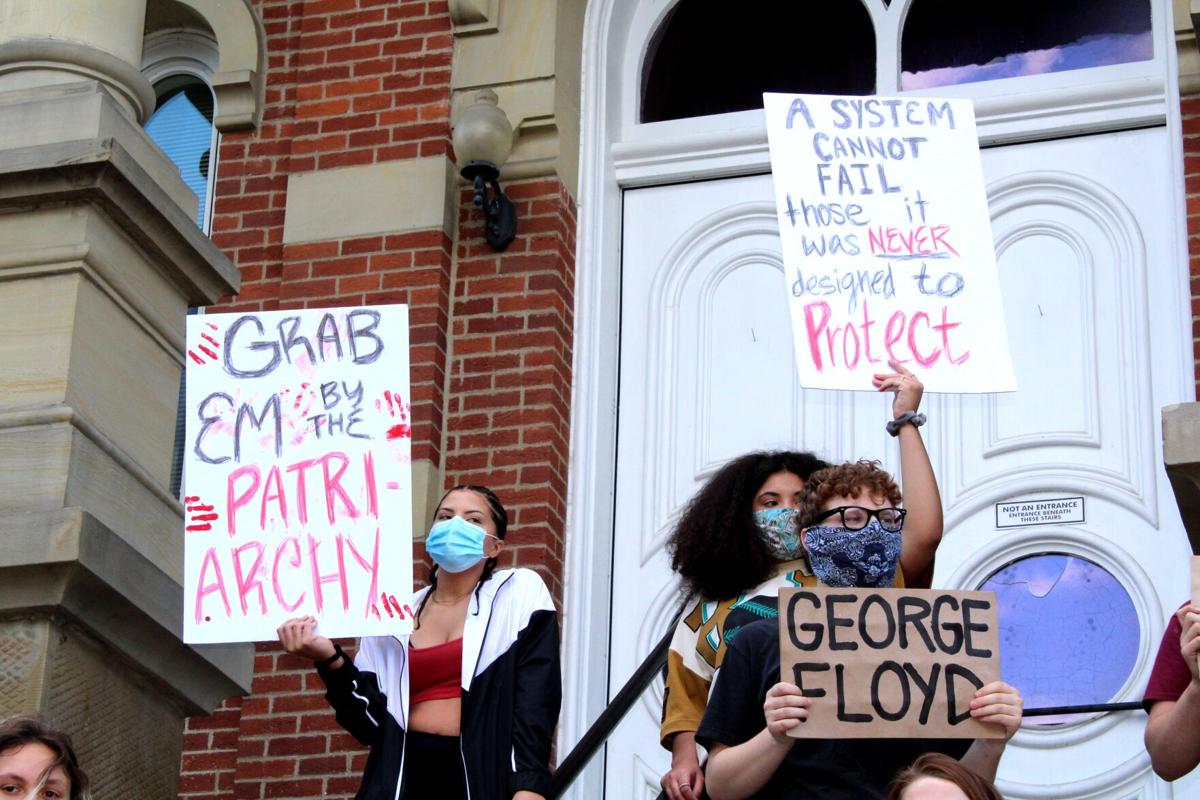 Protesters collected on the steps of the Athens County Courthouse Saturday and Sunday.

Protesters collected on the steps of the Athens County Courthouse Saturday and Sunday.

A large crowd of people gathered in front of the Athens County Courthouse Saturday and Sunday afternoon to protest against recent killings of African-Americans by police across the country and demonstrate in support of the Black Lives Matter (BLM) movement.

BLM is a national movement that has seen exponential growth in recent years as social-media coverage of police shootings of African-Americans have spurred a national conversation about race and policing.

The Athens demonstrators, which consisted of community members and Ohio University students, held signs largely advocating for equal treatment of African-Americans by police and society as whole.

According to the Washington Post’s database that tracks fatal shootings by on-duty police officers, 1,003 people have been shot and killed by police in the past year. In Ohio, 154 people were fatally shot by an on-duty officer from 2015 to now.

This database only accounts for individuals who are shot and killed by law enforcement and does not illustrate figures related to other fatalities, such as those linked to excessive force.

Specifically, the Athens weekend protests were sparked by recent killings of people of color. One fatality, that of George Floyd, occurred after Minneapolis police officer Derek Chauvin reportedly knelt on the neck of Floyd, who was unarmed, for nearly nine minutes. Chauvin has since reportedly been charged with third-degree murder.

Brooklyn Stallworth, OU student and Athens native, organized the weekend protests. Inspiration from the event sprouted from a popular social media platform, TikTok. Stallworth told The Athens NEWS that she saw protests happening in major cities like Los Angeles and Minneapolis, and then she saw the protests spread to the Columbus area.

“I thought, why don’t we have them (protests) here?” she said.

Stallworth, who is studying retail merchandising and fashion design with a minor in political science, invited others to join her through a Facebook post.

“Recently, we have gained access to news outlets and they are finally covering the BLM movement-this is a huge step for us because we have not been this successful before. We have to continue to put pressure on those who enable racism. We have to continue making these people uncomfortable in their ways to reach the change we have been fighting for, for centuries.” Stallworth stated in her social media statement. “We need to keep pushing BLM and bringing as much attention to it as possible. Your help is much appreciated and will not go unnoticed. We can march, we can fill the sidewalks, we can put flyers on buildings. It doesn’t matter what we do but WE WILL NOT GO UNHEARD.”

Stallworth, who was clad in camo and during the Saturday event, held a sign that had a personal protection mask popping from it with the message, “If a mask makes it hard to breathe, imagine being black.”

People demonstrating in front of the courthouse also chanted several phrases. Some chanted “say their names,” in reference to Floyd, Breonna Taylor and Ahmaud Arbery, who were all killed this year. Taylor, in her own home in Louisville by police officers. Arbery, while jogging in Georgia.

Others shouted "Justice for Floyd" or “No justice, no peace, no racist police.”

And of course, others simply chanted “black lives matter.”

Several cars driving passed the demonstration on Court Street honked their horns. Other cars held signs in support of the BLM movement as they drove by. In addition, Stallworth and friends put up posters scattered across uptown that stated “White supremacy is the real virus.”

A similar demonstration occurred at the Athens County courthouse the following day: this time also eliciting a large crowd, some of whom were officers of the Athens City Police.

Other rallies and protests are scheduled in the Athens area throughout this week. Two occurred on Tuesday: one in Athens and one in Nelsonville.

Because police brutality and misconduct never ever happen in non-progressive non-democrat locations. I suppose you're one of those guys who is waiting for their Sheriff to call up the waiting "militia" to do the job properly.

"Following the deaths of black people we have days and nights of rioting, looting and burning of property." You and I agree that rioting and looting are wrong. I am more concerned about the looting of trillions of dollars from our country by corporations who pay little to no taxes, sculpt the law in their favor via lobbyists, refuse to pay a living wage, and receive bailouts because they are "too big to fail". I am more concerned about the rioting done by police against peaceful protesters.

"The scars of these riots last forever." Buildings can be rebuilt. Merchandise can be replaced. George Floyd's life cannot.

"Are we blinded by party loyalty?" I would say so considering you mentioned progressives once and democrats twice in trying to pin the blame for this on leftists. This is not a partisan issue. This is a human rights issue.