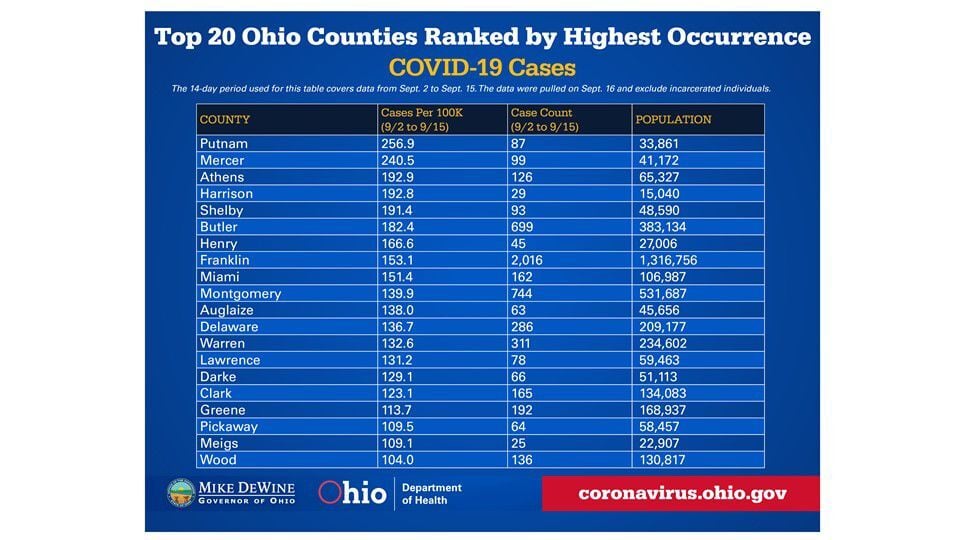 Athens County is the third county in a list of the Top 20 counties in Ohio ranked by COVID-19 case occurrences. Graphic provided by the Ohio Department of Health. 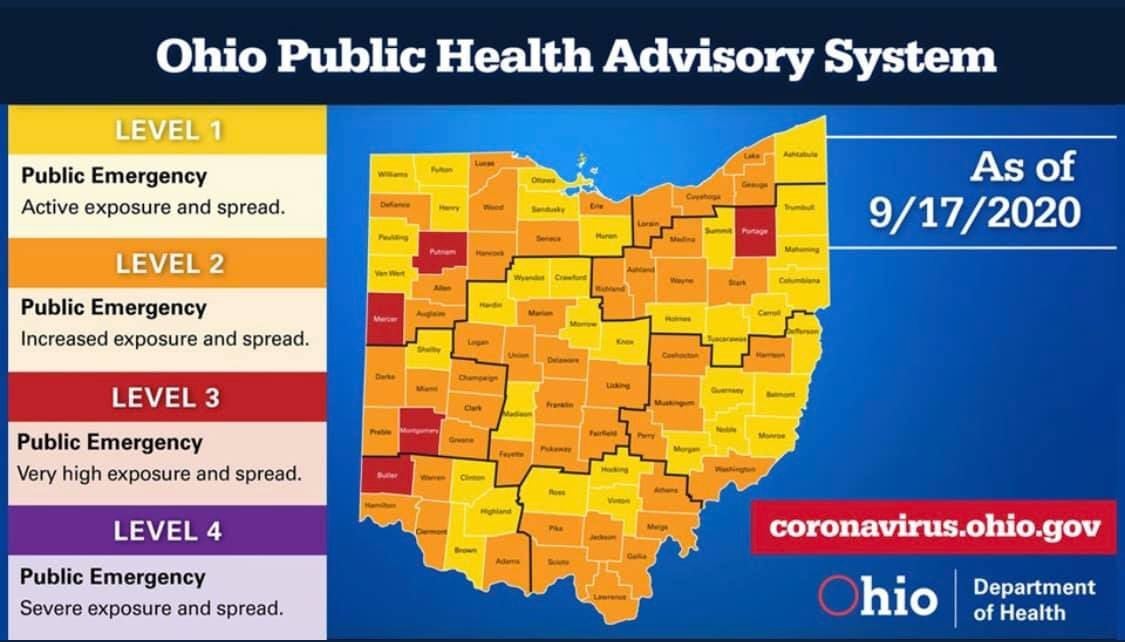 The Ohio Public Health Advisory System, as of Sept. 17. Graphic provided by ODH.

Athens County is the third county in a list of the Top 20 counties in Ohio ranked by COVID-19 case occurrences. Graphic provided by the Ohio Department of Health.

The Ohio Public Health Advisory System, as of Sept. 17. Graphic provided by ODH.

Athens County was ranked as the fourth county in Ohio in terms of coronavirus case occurrences, according to the Ohio Department of Health (ODH), reporting 209.7 cases per 100,000 people from Sept. 7-20.

As of Tuesday afternoon, there are 629 total known cases of COVID-19 in Athens County: 120 of these known cases are active, and 507 are recovered cases, according to the Athens City-County Health Department.

Statewide, confirmed and probable cases of the virus are increasing daily. As of Thursday, ODH reported 145,850 total COVID-19 cases in Ohio, and 4,635 deaths associated with the virus.

Young people ages 20-29 make up the vast majority of confirmed and probable cases in Athens County. Ohio Gov. Mike DeWine noted during his Sept. 17 news conference that many outbreaks of the virus in Athens County are associated with the “off-campus activities” of Ohio University students.

Two deaths are associated with COVID-19 in Athens County, both of which occurred in the 60-69 age bracket.

Here are how cases fall by age bracket according to ODH, as of Thursday afternoon:

The Ohio Department of Health recommends those traveling to or residing in Level 2 counties exercise “a high degree of caution.”

According to the advisory system, Athens County has triggered three of the seven indicators under the alert system: new cases per capita, proportion of cases that are not congregate cases and new cases increase.

The county had 126 new cases reported over the past two weeks, the system reported. In addition, as of Sept. 15, the county had a seven-day case average of 7.71.

Between Sept. 9 to Sept. 15, the county had a non-congregate percentage of cases of 100 percent.

Level 3 counties have “very high exposure and spread” and have triggered four to five of the case indicators. No counties in Ohio are classified as Level 4, the most severe public health advisory. ODH recommends residents of these counties only leave home for supplies and essential services.

At what level will OU take responsibility and send students home ?