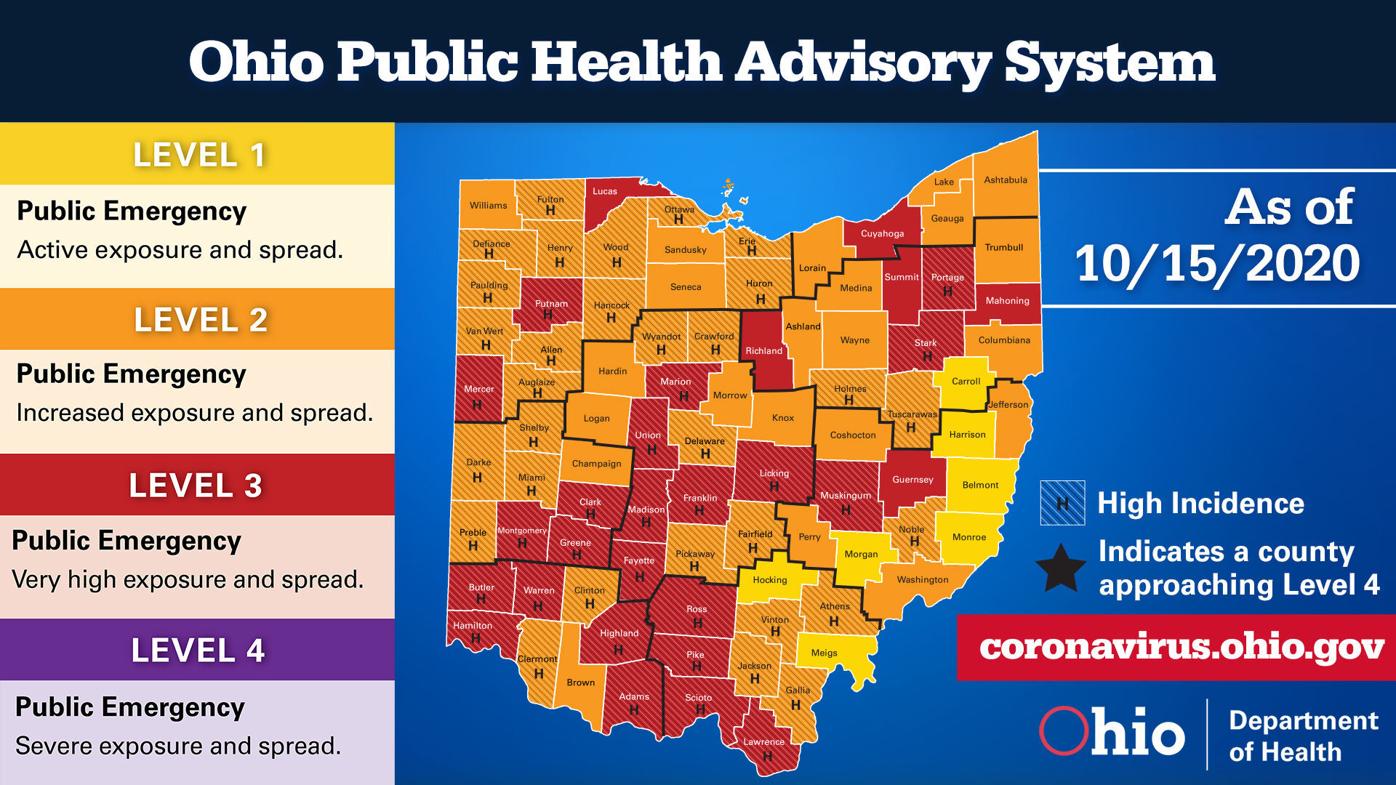 The Ohio Public Health Advisory System, as of Oct. 15. Image by the Ohio Department of Health. 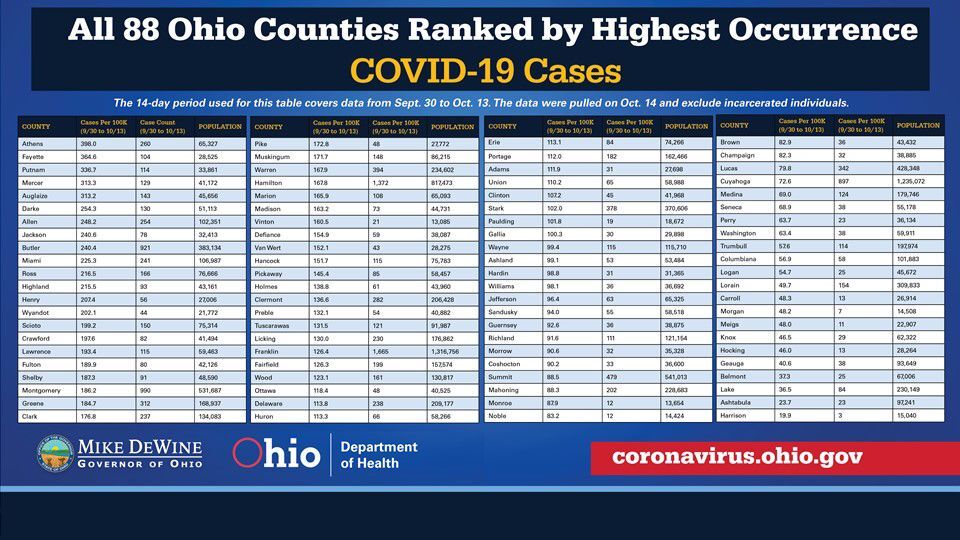 The state’s COVID-19 case occurrence ranking, as of Oct. 15. Athens County was ranked No. 1 in Ohio.

The Ohio Public Health Advisory System, as of Oct. 15. Image by the Ohio Department of Health.

The state’s COVID-19 case occurrence ranking, as of Oct. 15. Athens County was ranked No. 1 in Ohio.

Athens County was the top county in the entire state in terms of coronavirus case occurrence last week, the Ohio Department of Health reported.

As of Tuesday afternoon, there are 1,174 total known cases of COVID-19 in Athens County: 257 are active, and 915 are recovered, according to the Athens City-County Health Department.

Two deaths are associated with the virus in Athens County, both of which were men in the 60-69 age bracket, according to ODH.

In the entire state, 185,639 total cases have been reported, and 5,083 deaths are associated with the virus.

Dr. Gillian Ice, who serves as the special assistant to the president for public health operations at Ohio University, noted in her COVID-19 update last week that Athens accounts for 97 percent of cases performed by or reported to the university’s hotline. Ice also noted “sharp increases” among students in residence halls, with 94 cases (7 percent of students in housing) reported.

“There are a number of other halls we are watching closely, including Sargent, James, Sowle, and Tanaka,” Ice wrote in her weekly update. “I ask that all students redouble their efforts to wear masks and stay distanced. I recognize this is not an ideal college housing experience, but we are making the best of the situation we are in.”

OU’s COVID-19 dashboard breaks down cases of the coronavirus and testing associated with the virus.

Of the 2,959 asymptomatic Athens campus students randomly tested for the virus as of Thursday through the university’s partnership with CVS Pharmacy, 217 have tested positive — a positivity rate of about 7.1 percent, the dashboard states.

As of Tuesday, at least 994 students on OU’s Athens campus have self-reported to the university’s COVID-19 hotline that they tested for the virus. At least 492 of those tests came back positive, and at least 81 test results were still pending at the time.

Out of the at least 82 self-reported to the hotline tests for Athens campus employees, five have come back positive. At least six employee tests results were still pending.

The hotline data only accounts for those who self-report results.

Young people ages 20-29 continue to make up the vast majority of confirmed and probable cases in Athens County.

Athens County remains Level 2 in the Ohio Public Health Advisory System, and Ice noted in her weekly update that this is “largely due to the lack of hospitalizations.” ODH recommends those traveling to or residing in Level 2 counties exercise “a high degree of caution.”

According to the advisory system, Athens County has triggered three of the seven indicators under the alert system: new cases per capita, proportion of cases that are non-congregate cases and new cases increase.

The county had 260 new cases reported over the past two weeks, the system reported.

No counties in Ohio are classified as Level 4, the most severe public health advisory.