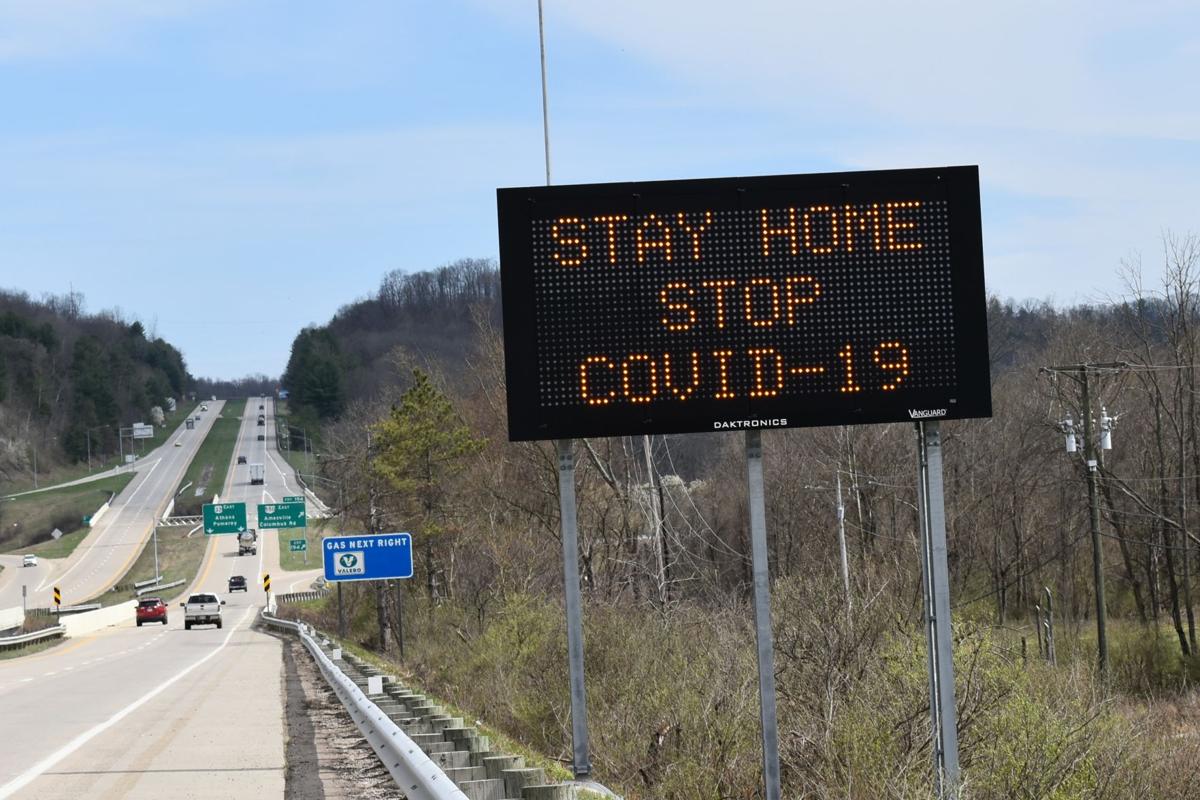 A sign on U.S. Rt. 33, near The Plains, reminding people to stay home to prevent the spread of the coronavirus. Photo by Conor Morris. 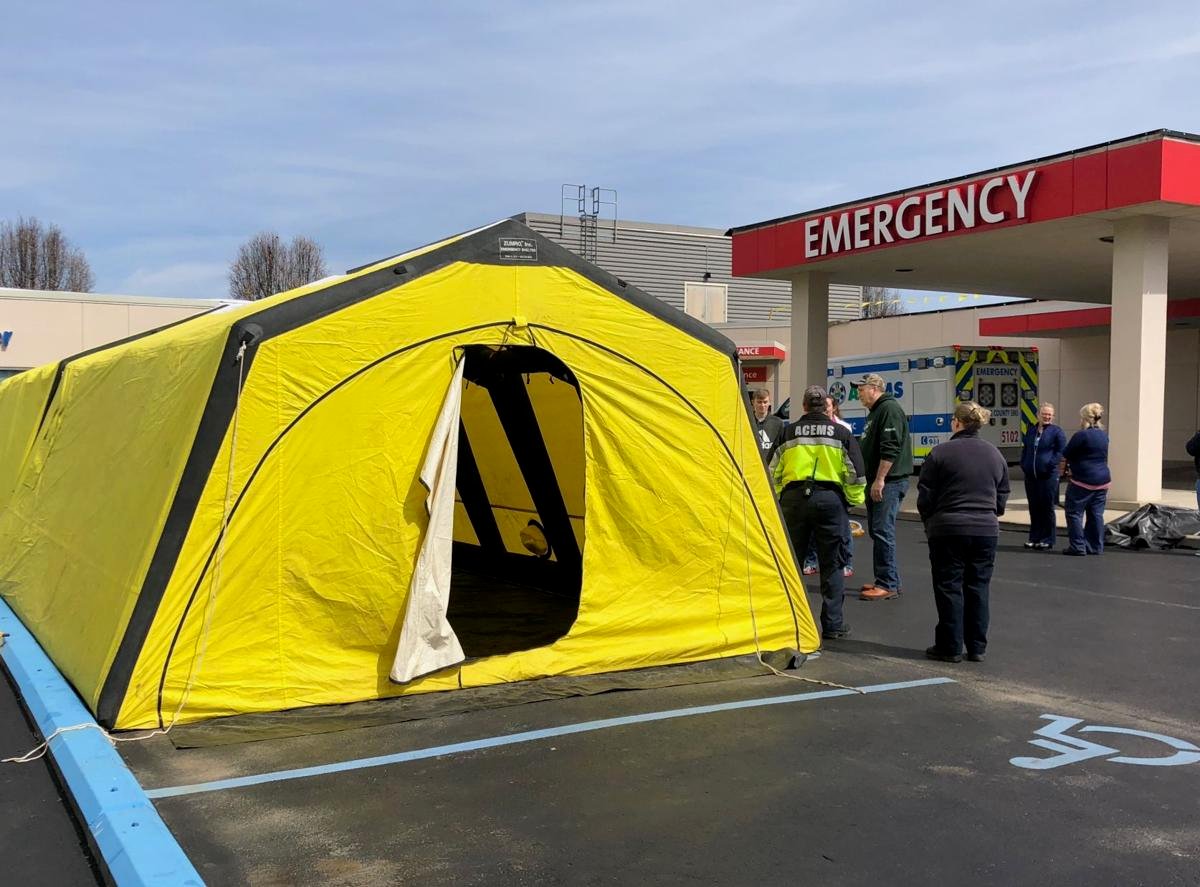 This is a file photo of "Triage tents" that went up as a test just outside the Emergency Department at OhioHealth O'Bleness Hospital on Sunday afternoon. They'll be erected again if a surge of COVID-19 cases occurs locally, a hospital official told The NEWS. They are NOT for testing for the virus.

A sign on U.S. Rt. 33, near The Plains, reminding people to stay home to prevent the spread of the coronavirus. Photo by Conor Morris.

This is a file photo of "Triage tents" that went up as a test just outside the Emergency Department at OhioHealth O'Bleness Hospital on Sunday afternoon. They'll be erected again if a surge of COVID-19 cases occurs locally, a hospital official told The NEWS. They are NOT for testing for the virus.

The Athens City-County Health Department on Thursday, March 26, confirmed the first case of the coronavirus (COVID-19) in Athens County. A second case was confirmed Saturday and a third case Sunday afternoon.

In her daily status report for Athens County, Ruth Dudding, the Health Department’s public information officer, Sunday afternoon wrote, "As updated by the Ohio Department of Health, at 2 p.m., March 29, 2020, there are now 1,653 confirmed COVID-19 cases in Ohio and 29 deaths. Athens County has three confirmed case of COVID-19.

No other details were provided about the second and third cases but on Thursday the Health Department reported that it was conducting a case investigation into the first patient’s close contacts, and that patient was recovering “in isolation at home,” according to a release issued Thursday morning.

The Health Department is not releasing the first patient’s area of residence, age, gender or health status, Dudding said Thursday. Presumably, that's the case with the second and third patients as well.

Ohio University President Duane Nellis announced Wednesday that a student who had just returned to the U.S. from a study-away trip had tested positive in their home county, and spent a brief time self-isolating in Athens until returning to the student's home county. That's not the same case as the one confirmed by the Health Department.

In the Health Department's Thursday release about the first local case, Dudding said, “We anticipate as testing is increasing in Athens County, more people will be confirmed. Whether a person is confirmed or not, we need to stress social distancing and other prevention methods.

"If you are experiencing respiratory symptoms and are preparing to see a doctor, call your physician’s office, urgent care, or emergency department before arriving for care. Let them know that you believe you are experiencing symptoms related to the COVID-19 virus. Your doctor can determine if you need to be tested," Dudding said.

"We understand that this is a difficult time for many people. People who become ill will need our empathy and concern," she continued. "Many community partners in Athens County have rallied to provide meals, share resources, and volunteer to help others. We are grateful for all of the support that has been seen and unseen in our communities. We know that the pandemic will end and routines will return to normal."

The first two confirmed cases in Athens County begs the question: How many people have been tested so far for the coronavirus?

The answer is complicated.

According to the Athens City-County Health Department's daily situation report as of yesterday (March 25), five people have tested negative so far for the coronavirus in Athens County; however, that's nowhere near indicative of how many tests have been administered so far by local health-care agencies, City-County Health Department Commissioner Dr. James Gaskell said Thursday afternoon.

He explained that those statistics are only counting coronavirus kits that have been sent by local hospitals to the Ohio Department of Health's lab for testing.

"We've had more tests than that, but honestly, I can't tell you how many tests we've had," Gaskell said. "We know for certain about the tests that go to the Ohio Department of Health's laboratory... (but) some of those are sent to LabCorp (a private company) for testing."

Gaskell said that for any kits being sent to private labs for testing, the Health Department and the public are only being notified about positive cases of coronavirus (not those that come back negative).

Ohio House Rep. Jay Edwards, R-Nelsonville, said in a brief interview Thursday that after conversations with the heads of multiple local health-care organizations in southeast Ohio recently, he can confirm that this region is not lagging behind the rest of the state in the number of tests that are being administered. He added that the "majority" of local coronavirus cases are being tested by private labs.

"We're not falling behind; we're not running out of tests," Edwards said of the number of tests being done.. "We're on par per-capita with other areas of the state."

However, there is a perennial issue with lack of access to health-care in rural southeast Ohio in general due to there being few public transit options, Edwards said, which he said might be why this region hasn't seen many confirmed cases yet.

Gaskell added that until recently, he thinks southeast Ohio has had lesser access to testing than some other parts of the state, but that's partly due to access to health-care facilities and their ability to do testing. However, that's changed this week, Gaskell said, noting that OhioHealth O'Bleness Hospital has opened up a new testing site in Athens (for high-risk people referred by a physician) as well as additional testing kits being made available across the state.

Ohio Department of Health Director Dr. Amy Acton said during a press conference Tuesday that Ohio likely has far more cases of the coronavirus in Ohio than the confirmed numbers; she said Ohio is preserving its testing kits for people who are highest risk of death or serious complications due to the coronavirus.

“It doesn’t give the fairest representation of what’s happening for instance in southeast Ohio,” she said. “Some of that’s lagging.”

OhioHealth O'Bleness spokesperson Keely Stockwell said in a statement Thursday that OhioHealth can't confirm or deny any cases of COVID-19 at any of its hospitals or care sites.

"What I can tell you is based on availability we have a limited number of tests that we are able to conduct on a given day," she said. "That number could change throughout the days of testing based on the referrals to testing from physicians. The testing results turnaround time is getting quicker, so that might change some of the numbers we are seeing.

"We have several testing sites throughout the areas we serve, and are seeing patients," she added. "The Athens location opened this week, and we are constantly monitoring the number of tests administered, and the amount of supplies available."