From left, 1) A composite image of the serial rapist in Athens released in January 2016, based on a description provided by the victim in a June 2015 rape in Athens. 2) A phenotype composite of the serial rapist based on the suspect’s DNA, released in April 2016. 3) The jail photo of Shawn J. Lawson Jr., after he was booked on multiple charges Monday , including two counts of rape, at the Southeast Regional Jail in Athens. 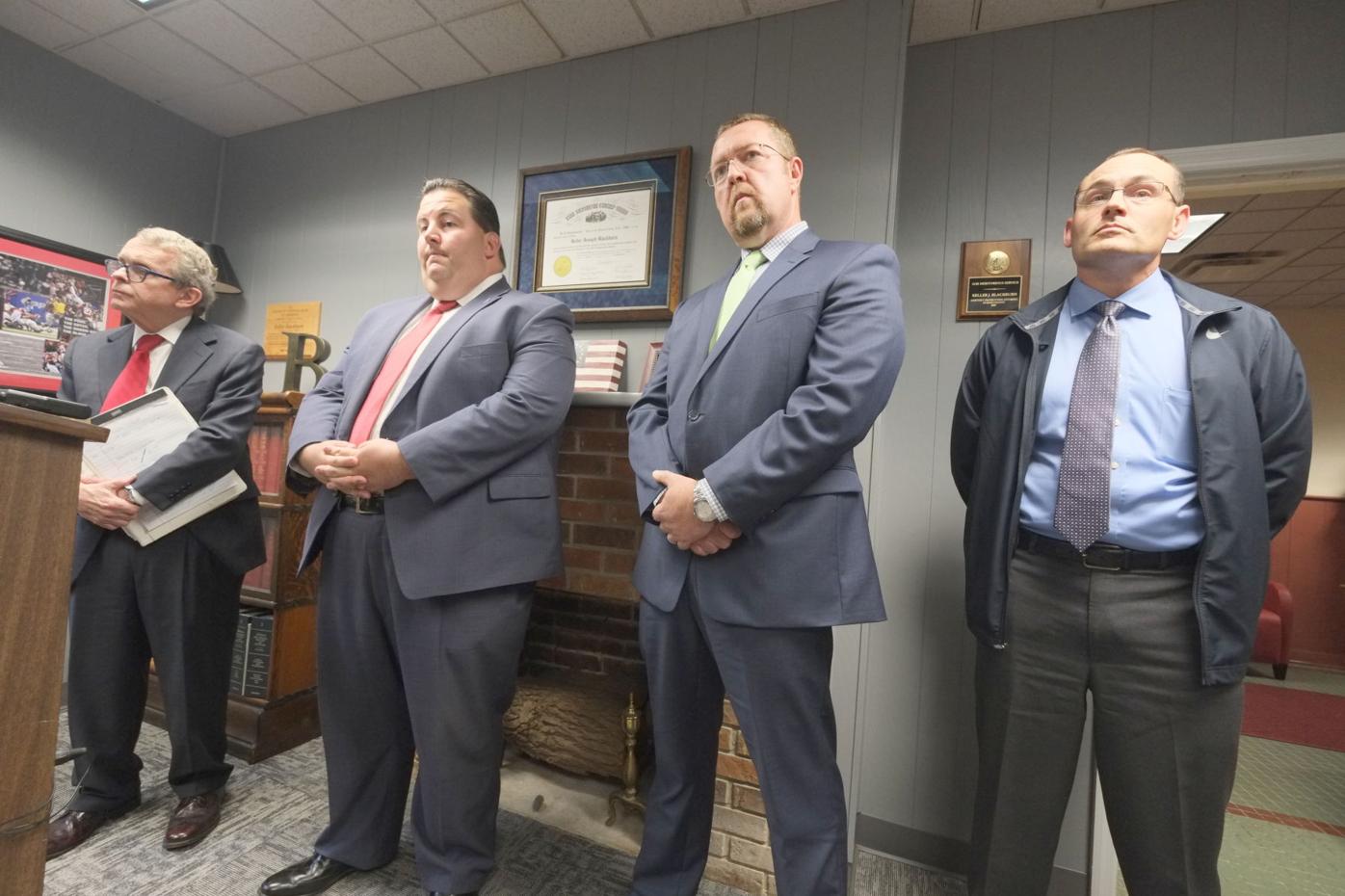 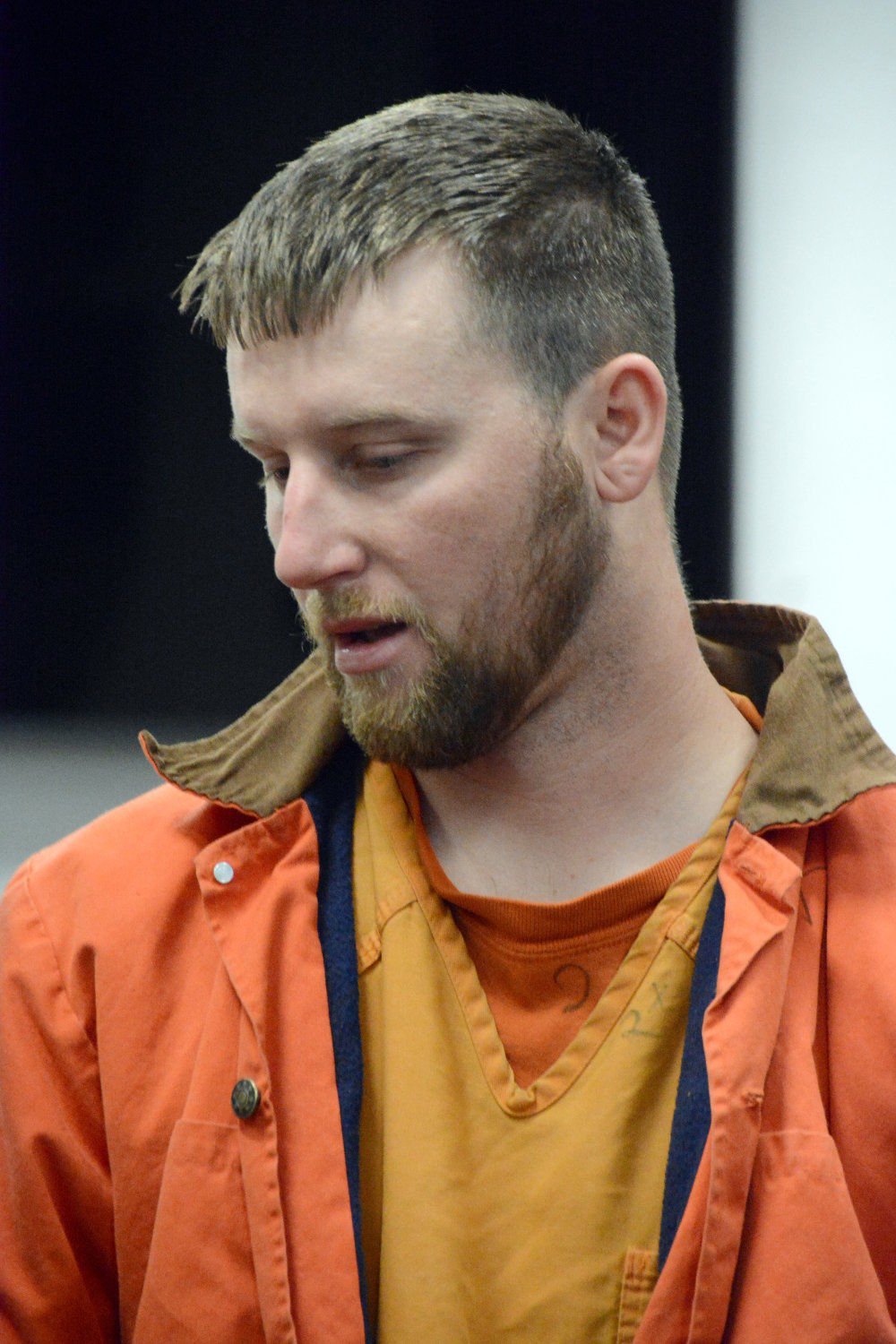 From left, 1) A composite image of the serial rapist in Athens released in January 2016, based on a description provided by the victim in a June 2015 rape in Athens. 2) A phenotype composite of the serial rapist based on the suspect’s DNA, released in April 2016. 3) The jail photo of Shawn J. Lawson Jr., after he was booked on multiple charges Monday , including two counts of rape, at the Southeast Regional Jail in Athens.

The use of advanced DNA collection technology and an alleged rape in Lancaster in March led to the arrest of an Athens County man Monday, who is accused of committing three sexual assaults, including two rapes, in uptown Athens over the course of 10 years.

“What you’re seeing today is the result of some very good police work over an extended period of time,” Ohio Attorney General Mike DeWine said in a press conference Tuesday afternoon at the County Prosecutor’s Office. He praised Athens Police for their work and the cooperative effort between agencies.

Lawson is being held on a $3 million bond with no 10 percent allowed at the Southeastern Ohio Regional Jail in Nelsonville on 11 felony charges including rape, attempted rape, kidnapping, felonious assault and aggravated burglary.

He pleaded not guilty to those charges Tuesday afternoon with his attorney, Public Defender Doug Francis, saying Lawson “looks forward to clearing his name, and denies these allegations.”

Francis informed the court that prosecutors have raised the question of a conflict of interest in Lawson being represented by the Public Defender’s office, though he did not elaborate on the alleged conflict.

He also told the court that Lawson has a wife and a daughter and another child on the way.

Lawson’s family expressed words of support as he was led out of the courtroom, encouraging him to “hang in there” and to not “let them get you down.”

Athens Police have been hunting for what they described as a serial rapist since at least January 2016. They suspected him of being involved in three sexual assaults in uptown Athens between 2006 and 2015. Lawson’s grand jury indictment from Monday states that the crimes occurred against three separate victims on June 20, 2015; Dec. 12, 2015; and June 11, 2006.

Lawson would have been 15 years old at the time of the first incident in June 2006, though Athens County Prosecutor Keller Blackburn said Tuesday the charges against Lawson for that incident do not carry any juvenile specifications.

The assaults all occurred under similar circumstances, police have said, when the female victims, all college-aged, were walking home alone from the uptown area early in the morning.

AN INITIATIVE BEGUN IN 2012 by Ohio Attorney General Mike DeWine for the state to test old rape kits for DNA going back 20 years led to a match between the 2006 case and the June 2015 case, Athens Police Chief Tom Pyle said at Tuesday’s press conference.

In the June 2015 case, APD Lt. Jeff McCall used a technique called “touch DNA” to collect evidence, where DNA can be obtained from areas on the victim’s body that a perpetrator touched, according to Pyle.

Chief Pyle praised McCall for thinking to use “touch DNA” testing in that case, which he said led to a later match with the December 2015 case, and, combined with DeWine’s initiative, a match to the June 2006 case.

“I want to personally thank all the assisting agencies,” Pyle said. “But for Lt. McCall’s obtaining that touch DNA evidence in the June 2015 case, we would not have identified that we did have a serial rape case to investigate. I believe the Athens community should recognize Lt. McCall for his efforts.”

DeWine said the combination of his office’s initiative, the touch DNA testing, and a phenotype that was contracted by the APD to be developed based on the suspect’s DNA all contributed to the investigation’s resolution.

That phenotype, developed by Parabon NanoLabs in Florida, created a composite of the suspect, with a DNA snapshot that determined the odds for certain physical features such as skin color, eye color, hair color, freckles and ancestry. It led to more than 150 tips and around 30 people being called into the APD for DNA samples, McCall said.

Asked what type of accuracy DNA matching has, DeWine said, “It either matches or it doesn’t.”

Blackburn said that Lawson was enrolled in the Prosecutor’s Office diversion program after being arrested for OVI (drunk-driving) by the Ohio State Highway Patrol in April 2016 and charged with a felony for having a firearm in his vehicle while driving it intoxicated.

The Highway Patrol did not obtain a DNA sample from Lawson at the time of that arrest, Blackburn said. He also noted that Lawson has a juvenile record that occurred prior to the rape in 2006 for which he is charged, though Blackburn could not provide details because Lawson was a juvenile at the time.

Blackburn said that on Monday his office called Lawson in for a random diversion drug test “that wasn’t so random” and then arrested him at their offices in the Athens County Courthouse.

The Lancaster rape is not included in the current indictment against Lawson in Athens County, Blackburn said, adding that he expects that additional charges will be filed. He said the victims have all been updated on the status of the case, and encouraged any other potential victims to contact the APD’s Lt. McCall at 740-592-3316.

Lt. McCall confirmed that Lawson attended Alexander Local School District in Athens County. Blackburn said that Lawson has been employed as a tree-trimmer, and due to the transient nature of that work, authorities suspect there may be victims in other counties.

DEWINE SAID THAT THROUGH his office’s initiative, state crime labs have tested more than 13,000 old rape kids and either have found matches with known suspects or matches between cases with unknown suspects on 38 percent of them.

He said that this has allowed law enforcement to draw connections between rapes cases over an extended period of time.

“What you see is that there is a large number of serial rapists in there,” he said. “It reinforces frankly what every prosecutor knows intuitively, and what every police department, police officer and sheriff’s deputy knows, and that’s that many times rapists are serial rapists.”

How many are prosecuted for sexual assault crimes locally?

With an ongoing investigation by local law enforcement that could bring more charges against a serial rape suspect from Athens County, it’s im…