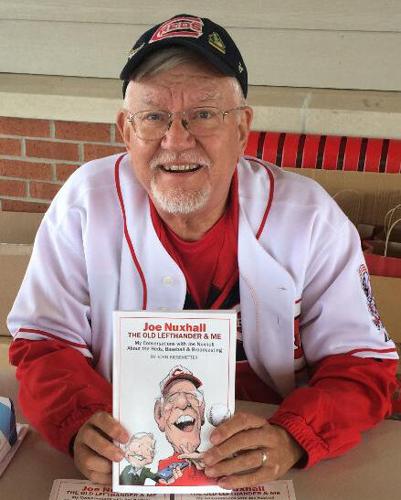 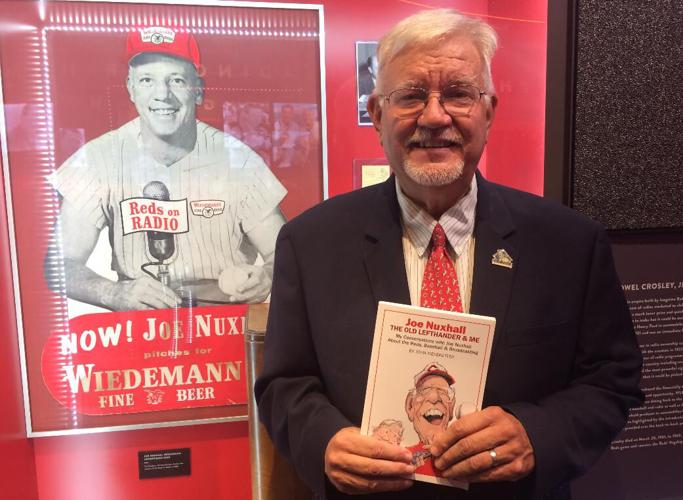 John Kiesewetter, a 1975 OU grad who was the longtime columnist for the Cincinnati Enquirer, will be talking about former Reds pitcher Joe Nuxhall’s career and signing his book, “Joe Nuxhall: The Old Lefthander & Me,” at 6 p.m. Wednesday at the Athens County Public Library, 30 Home Street. Here, Kiesewetter holds up a copy of his book at the Reds Hall of Fame in 2021.

John Kiesewetter, a 1975 OU grad who was the longtime columnist for the Cincinnati Enquirer, will be talking about former Reds pitcher Joe Nuxhall’s career and signing his book, “Joe Nuxhall: The Old Lefthander & Me,” at 6 p.m. Wednesday at the Athens County Public Library, 30 Home Street. Here, Kiesewetter holds up a copy of his book at the Reds Hall of Fame in 2021.

When John Kiesewetter was a boy growing up in Middletown, he never dreamed he would write a book.

However, that accomplishment is now just one of many accolades on the Ohio University graduate’s resume.

And now he returns to his college roots to catch up with some of his OU friends and to autograph his book that details the career of legendary Cincinnati Reds’ pitcher, Joe Nuxhall.

Kiesewetter, a 1975 OU grad who was the longtime columnist for the Cincinnati Enquirer, will be talking about Nuxhall’s career and signing his book, “Joe Nuxhall: The Old Lefthander & Me,” at 6 p.m. Wednesday at the Athens County Public Library, 30 Home Street.

The book is filled with Nuxy’s (as he was affectionately known) stories about his playing and broadcasting career, his 31-year partnership with Marty Brennaman; the pranks they played on each other in the booth and off the air and Joe’s hilarious stories he told to service groups and at banquets for years, Kiesewetter said.

“Examples of the stories that Joe Nuxhall (and Marty B) told — Joe falling on his butt on the wet Wrigley Field grass when two Cubs batters bunted on him after a rain delay. He got so mad after Manager Birdie Tebbetts pulled him that he tried to tear up his glove, threw it in the stands, and scattered the bats and helmet,” Kiesewetter recalled.

“One time Joe was pranked in the booth during a game in San Francisco when the engineer replaced an instant replay of Joe Morgan stealing second base with a clip from the pornographic movie “Deep Throat.” Joe also told about wrestler “Macho Man” Randy Savage showing up in the Riverfront Stadium booth (in costume) during a day game and ripped a poster of Hulk Hogan off the radio booth wall.”

And then there was the time Nuxhall walked the bases loaded, and was 2-0 on the batter when big Ted Kluszewski called time and started walking over to the mound to offer encouragement.

“Joe didn’t want to hear and waved him off saying, “You go back to first base. I’m doing the pitching,” Kiesewetter said, adding that “Klu stopped and glared at him and said, “Oh yeah? When you gonna start?”

Nuxhall holds the record for being the youngest player (age 15) in the Major Leagues when he pitched for the Reds on June 10, 1944. The 78th anniversary of his first start is Friday, June 10.

“His cancer came back before the 2007 season, and he died in November 2007. He never really “did” anything in retirement except play golf and do speaking appearances when feeling good. Marty Brennaman told me he retired after 2019 season, after 46 years, because he still had his health and wanted to travel, play golf and enjoy life — unlike Joe, who was too ill to really enjoy retirement when he left the booth,” Kiesewetter said.

Talking about the book and its subject brings back great memories for Kiesewetter, many of which are now documented in print.

“Whenever I interviewed Joe while I was the Cincinnati Enquirer TV columnist, I taped the conversations and would get him to tell his favorite stories – like Jim Maloney’s spitball duel with Gaylord Perry, falling on his butt trying to field bunts on the wet grass at Wrigley Field after a rain delay; or how he pranked Marty with the help of a Montreal radio engineer,” he said.

Brennaman wrote the book’s foreword, “and was very helpful in my writing the book. About half of it could be called “Marty & Joe,” Kiesewetter said.

Kiesewetter’s friendship with Nuxhall goes way back and writing this book was a labor of love for the author who now lives in Fairfield.

“I was fortunate to meet Joe, and interview Marty Brennaman and Joe Nuxhall a lot, as the Cincinnati Enquirer’s TV/Radio columnist starting in 1985. At the same time, we built a house in Fairfield, same town where Joe lived, and we’d run into him around town.

“He’d speak every year to the K of C (Knights of Columbus) at my church, and I went to hear him. He told hilarious stories about his playing days, his explosive temper, and teammates like Ted Kluszewski,, Jim Maloney, Pete Rose — for 90 minutes or more without notes. It was amazing and hilarious.”

Kiesewetter said that in 2004, the former pitcher wrote his own book and “none of those great stories were in the book. So a few years ago, after I left the Enquirer, I decided to write this book to preserve, prize and pass down these great stories to generations of Reds fans.”

Obviously, the book has been a huge hit with the Reds faithful and Kiesewetter appreciates their support.

“My book has been hugely popular with Reds fans, and I know there are Reds fans and Marty & Joe fans in Athens,” he said, adding, “I’ve sold 4,000 books in nine months, despite limited distribution.”

The book is published through Chilidog Press in Cincinnati, and it’s available only in Cincinnati bookstores, on Amazon and on Kiesewetter’s website, TVKiese.com.

While the book details the pitcher’s legendary career both on the baseball diamond and the TV booth, Kiesewetter’s accolades are almost as impressive.

“I grew up in Middletown, Ohio, (between Cincinnati & Dayton). I’m left-handed, and my favorite player growing up in the 1960s was lefty “Hamilton Joe” Nuxhall from just down the road in Hamilton,” he said.

“I became a big Reds fan in 1961, at age 8, when the Reds went to the World Series (and got clobbered by the Yankees). The next year the Reds called up a pitcher named Joe Nuxhall, and he went 5-0. I’m lefthanded, he was lefthanded, and he became my favorite player. I thought he was some young kid just called up from Triple-A, and my Dad told me me that he was 33, made history debuting at 15 in 1944, and was a star pitcher for the Reds in the 1950s and a two-time all-star.” Kiesewetter said.

Kiesewetter was editor of The Post in 1975, and after graduation was hired by the Cincinnati Enquirer, where he worked 40 years (30 years as TV/Radio columnist). After getting downsized by the Enquirer, he joined Cincinnati NPR affiliate, WVXU-FM, to continue covering television and media.

The list of celebrities Kiesewetter has spoken to over the years is basically a Who’s Who of Hollywood, everyone from Lucille Ball and Gregory Peck to Dick Van Dyke and Oprah Winfrey, and many more.

Returning to Athens for the book signing pretty much signifies a full-circle moment for the author and he can’t wait to get back to his college roots.

“It’s a huge thrill to come back to Athens and do a book signing. I never dreamed I’d write a book — or being doing a book signing in Athens,” he said.

Cost of the book is $20 and they will be taking only cash or check at the library tonight. A portion of the proceeds will go to the Nuxhall Foundation which provides accessible and inclusive baseball fields and recreational opportunities with a big-league gameday environment for athletes of all ages with special abilities. The event will be live-steamed, but registration is required. Visit myacpl.org to sign up.