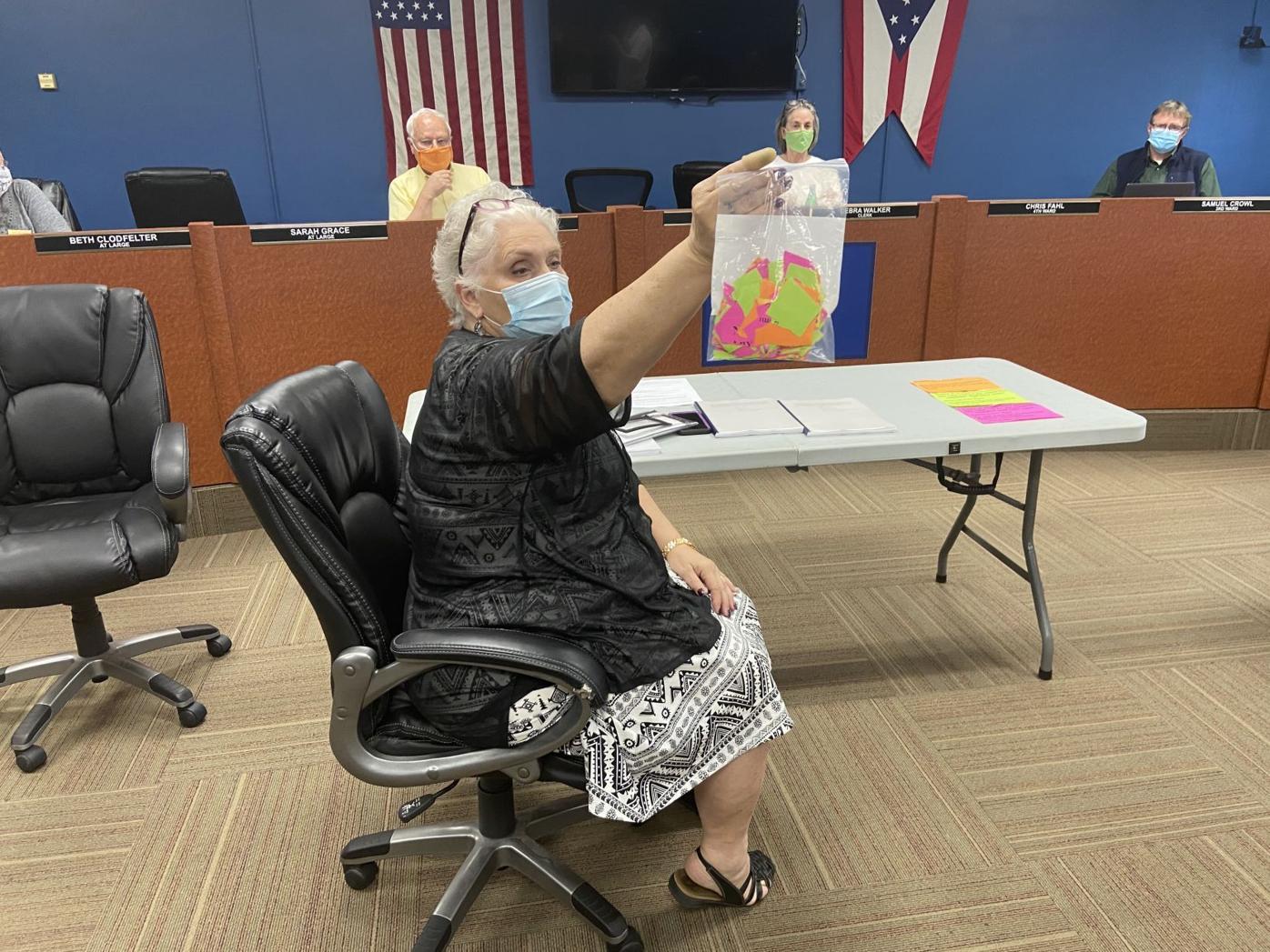 Athens County Board of Elections Director Debbie Quivey brandishing torn scraps of the signs recovered from a trash can. Photo by Ben Peters. 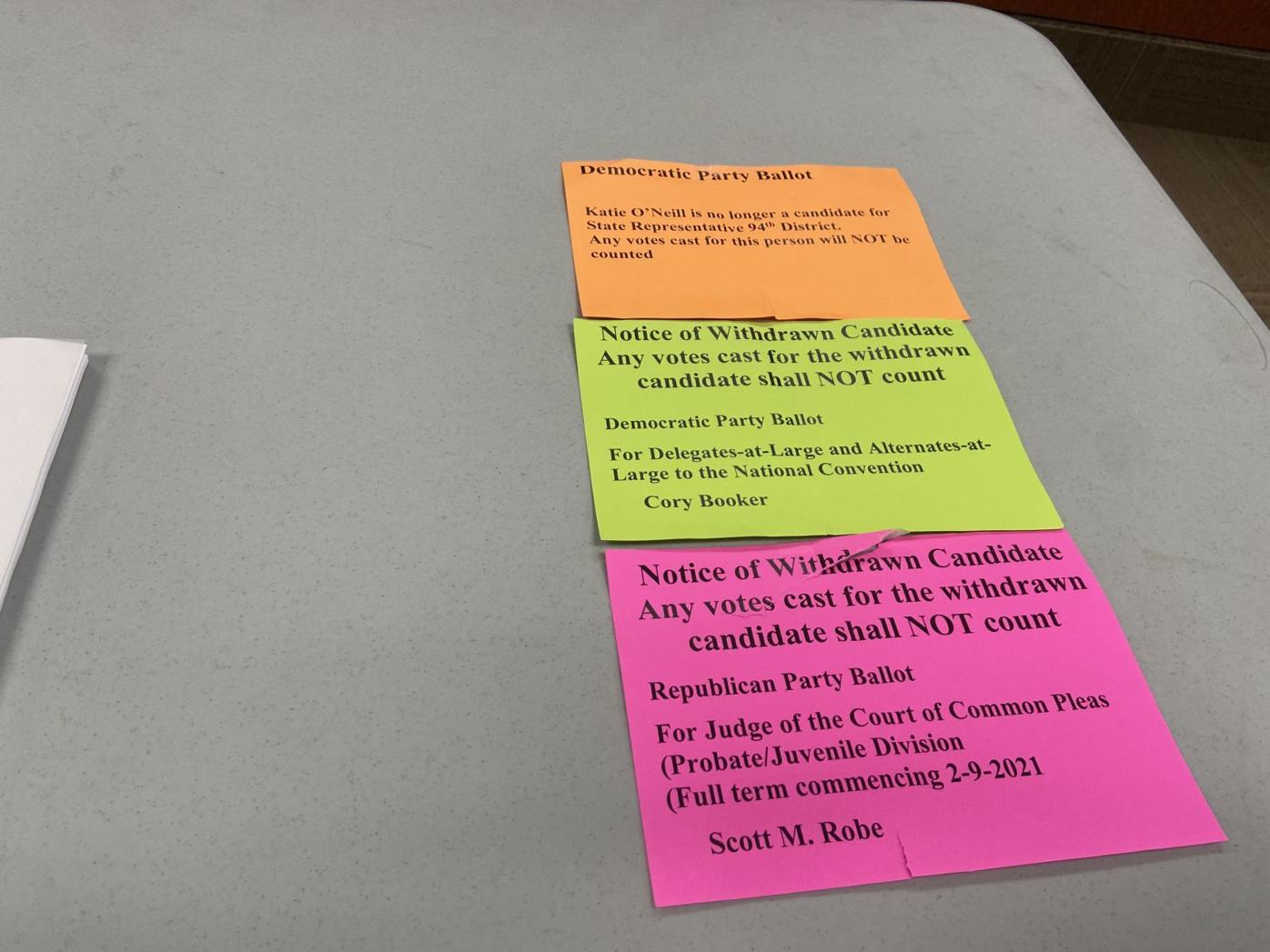 The three signs that were incorrectly displayed in voting booths at the Alexander Wellness Center polling location on Election Day. Photo by Ben Peters

Athens County Board of Elections Director Debbie Quivey brandishing torn scraps of the signs recovered from a trash can. Photo by Ben Peters.

The three signs that were incorrectly displayed in voting booths at the Alexander Wellness Center polling location on Election Day. Photo by Ben Peters

Debbie Quivey, director of the Athens County Board of Elections, presented findings of an investigation last Tuesday afternoon that confirmed signs incorrectly warning voters that ballots cast for Katie O’Neill, a candidate for the 94th district seat in the Ohio House of Representatives, wouldn’t be counted were posted in voting booths at the Alexander Wellness Center polling location on Election Day for several hours before being discarded.

Quivey’s investigation corroborates through dozens of affidavits signed by poll workers that the episode in Alexander was an isolated incident of human error that wasn’t replicated at any other voting locations across the county.

Quivey, who spoke before the Board of Elections and other county officials in the Athens City Council Chambers, said that the neon orange signs were never removed from voting booths after the primary election.

She instructed all polling locations to remove the signage from voting booths after Ohio’s May primary election where O’Neill was disqualified from the ballot after the Board of Elections voted to remove her following a protest filed by Nelsonville resident who alleged she wasn’t a resident of Ohio House District 94 for at least a year prior to the general election.

The Supreme Court of Ohio ultimately overruled the Board of Elections vote in a 6-1 decision, saying it in some cases “clearly disregarded applicable law” by rejecting her petition to run for office, effectively allowing her to receive votes in the general election.

“Unfortunately, Alexander did not think of it. I stand by 100 percent; I feel this was absolutely a mistake on their part,” Quivey said in defense of poll workers at the location.

There was a total of five signs posted at the Alexander location that for hours spread blatant misinformation to voters about O’Neill’s status as a candidate. Four were removed around 9 a.m., more than two hours after the polls opened, after an election official noticed them, according to a handwritten affidavit signed by nearly 20 poll workers in Alexander. The remaining sign wasn’t removed until around 2 p.m. when a voter questioned an official about it.

“Lady was extremely upset, stating that someone (a worker) should have noticed this, what a disgrace, this was, that we all must be Edwards followers and must be paid to keep them up,” the affidavit said, referencing O’Neill’s opponent incumbent Republican State Rep. Jay Edwards.

“Election official again apologized, stating we have contacted the Board of Elections, everything has been removed, even went so far as to offer a new ballot.”

Edwards did not respond to a request for comment concerning the meeting and Quivey’s findings.

Nearly 900 voters cast ballots in Alexander before 2 p.m., Quivey said, but not all of them saw the signs since most were removed earlier in the morning. She determined through her investigation that the misplaced signs couldn’t have possibly swung the results of the election, which O’Neill lost in a more than 20-point landslide.

“I think it’s pretty clear based on the evidence that you submitted that this didn’t make a difference in the election, but that doesn’t mean it’s any less hurtful … we’re all very sorry and regretful for what happened,” Chair of The Athens County Democratic Party John Haseley said at the meeting.

Quivey, who previously maintained that nothing about the incident in Alexander was illegal, reaffirmed that she is personally unaware of any election law that could have been broken as a result of the misplaced signage. The circumstances, in her opinion, did not erode the integrity of the election.

Once Quivey was informed of the incident in Alexander, she instructed a maintenance worker to retrieve all equipment from the location, including torn scraps of the signs recovered from a trash can that she brandished at the meeting, load it all into a trailer and lock everything inside a room at the Board of Elections’ Court Street office for the purpose of preserving evidence.

She shared at the meeting a copy of the orange sign in question, along with two other signs posted in Alexander that were mistakenly left over from the primary notifying voters that ballots cast for former Democratic presidential hopeful Sen. Cory Booker and former Republican candidate for Athens County Court of Common Pleas Scott M. Robe wouldn’t count. Neither men were on the general election ballot.

A spokesperson confirmed Monday that Ohio Secretary of State Frank LaRose’s office had been “made aware” of what happened in Alexander. LaRose’s Chief Legal Counsel D. Michael Grodhaus told Quivey the matter was a local issue and thus should be handled by the county Board of Elections rather than the state. LaRose’s office also recommended that Quivey consult with Athens County Prosecutor Keller Blackburn, who was present at the meeting, on how to proceed with the investigation.

Blackburn said that O’Neill’s attorney, Louis Grube, warned they’re considering pursing litigation against the Board of Elections, something the prosecutor indicated the county is trying to avoid by fulfilling Grube’s public records requests and truthfully answering all of his questions on behalf of O’Neill. The Board of Elections determined it would respond to all of Grube’s inquiries by Friday.

“We have nothing to hide, there’s no reason not to be forthright in doing this and try to stave off (a lawsuit) before it gets any further,” Blackburn said.

In an interview with The NEWS, O’Neill wouldn’t say whether she was planning to move forward with a lawsuit against the Board of Elections.

The Board of Elections agreed to send O’Neill a formal apology for the incident in an attempt to compensate for the damage done to her campaign. The apology letter, which incorrectly stated the name of the seat O’Neill ran for, arrived in her email inbox Sunday afternoon.

“The Director has thoroughly investigated this matter and the Board of Elections takes full responsibility ... Our mistake was by no means an attempt to denigrate the diligent, honest effort put forward by you and your team. We commend your commitment to this race,” the Board of Elections wrote in the letter.

O’Neill, who was nowhere to be found at Tuesday’s meeting, said she was infuriated with The Board of Elections and other county officials for not reaching out to her or Grube about Tuesday’s meeting, saying she didn’t know it occurred until media reached out for comment after the fact and that she felt excluded from the process. She was also livid she was not provided with a copy of the investigation, a public record, before news media was.

Quivey said Board of Elections protocol only required her to contact news media about the event. She also invited a select few officials, like Blackburn, who had been integral to the investigation process.

“I assumed I had no obligation to reach out to her. And I assumed that if Prosecutor Blackburn felt that her attorney needed to be contacted that he would contact him,” she said. “I mean, it was not done deliberately.”

Asked on Tuesday if she would accept an apology from The Board of Elections, O’Neill replied, “How genuine am I supposed to take that apology at this point?”