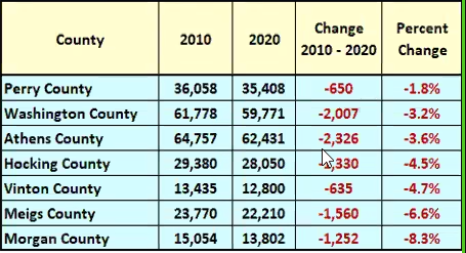 A screen shot from a Census Bureau presentation shows a regional decline in population. 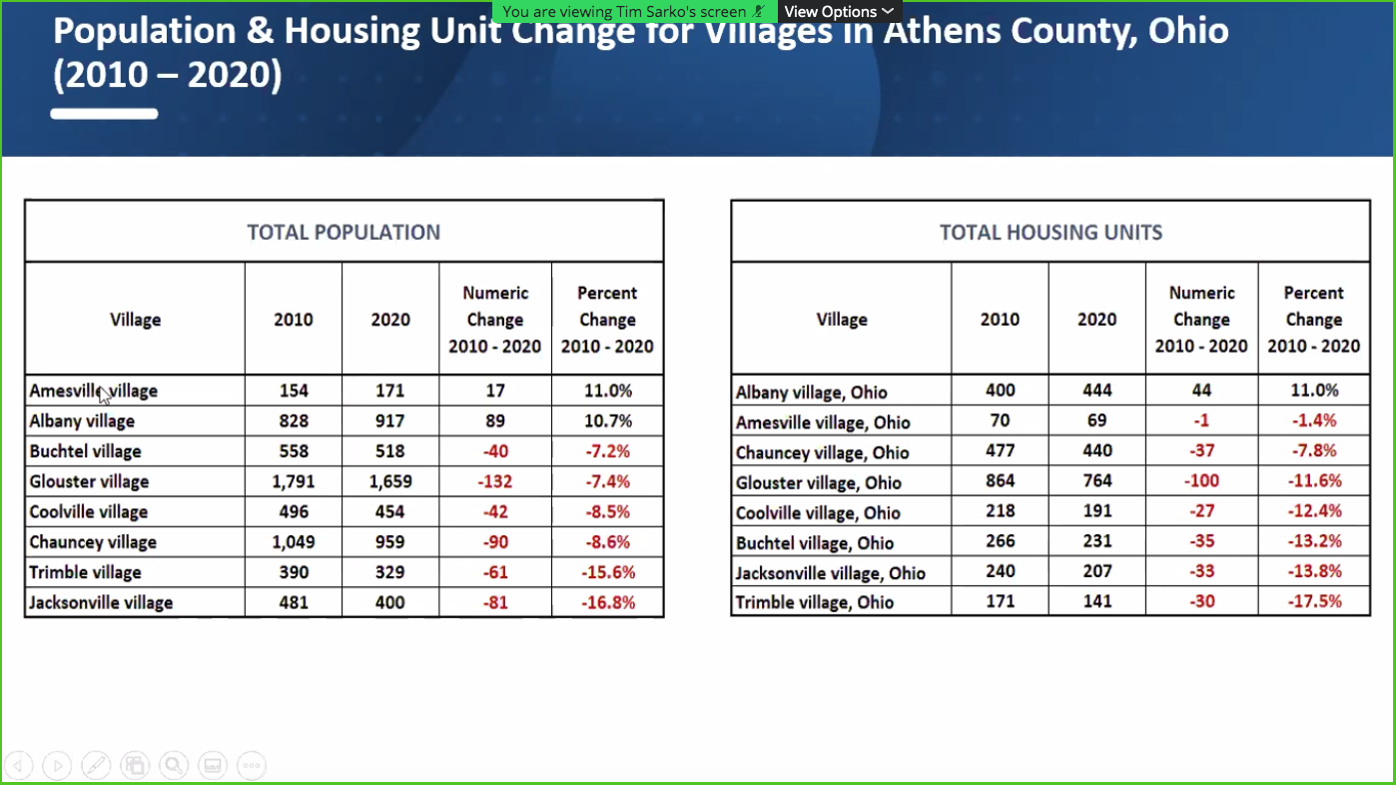 Village population data in the 2020 census for Athens County. From a Census Bureau presentation.

A screen shot from a Census Bureau presentation shows a regional decline in population.

Village population data in the 2020 census for Athens County. From a Census Bureau presentation.

The results for the Athens County 2020 census are in — and they show a steep decline in population across the county and region.

On Friday, Nelsonville officials received a proclamation from Secretary of State Frank LaRose declaring that the city will revert to village status in 30 days. The U.S. Census estimated the city's population in 2019 at 5,130, just above the minimum 5,000 needed to remain a city. City Manager Scott Frank said the Nelsonville will challenge the results.

Overall, the population of Athens County decreased by 3.4%, reflecting a larger shift in population away from southeast Ohio, according to data presented Wednesday during a meeting with Census Bureau and Athens County officials.

Of the six other neighboring counties (Perry, Washington, Hocking, Vinton, Morgan and Meigs), all counties declined, with Morgan County losing 8.3% of its population since 2010.

“That was a lot of fun, wasn't it? I’m glad it's over,” Athens County Commissioner Chris Chmiel said as the Zoom meeting was ending.

Chmiel added that officials representing the county's municipalities and townships should regroup in a month after thinking about some of the implications of the data.

“It was a challenging time for our community to have a census, especially with the university population not being in the county,” Chmiel said.

According to the official data presented Wednesday, Athens gained 17 people, or a .1% increase from 2010 — making the total population 23,849. Athens also gained housing units, a 10% increase since 2010.

Only two other Athens County municipalities increased in population — Albany and Amesville. Albany increased from 828 residents to 917, reflecting a 10.7% change. Amesville increased 11%, growing from 154 in 2010 to 171 according to most recent data.

But elsewhere in the county, village populations are being decimated. Jacksonville's loss of 81 residents since 2010 represents a 16% drop to a population of 400. Trimble village's population declined 15.6%, losing 61 residents for a 2020 population of 329.

Populations of Chauncey, Buchtel, Coolville and Glouster all also declined at rates ranging from 7.2% to 8.6%.

Among the townships, only Ames and Lee townships have grown, both by about 4%. York Township's resident count declined by 909 people (11.7%) since 2010, to a current population of 6,852. Trimble Township's population decreased by 439 residents, a 9.8% decline.

“We’ve got the old coal communities like Trimble Township, Nelsonville, maybe some of those communities have had a harder time,” Chmiel said following the meeting.

However, the most notable decline was Nelsonville's, which saw a population decline of 780 residents, or a 14.5% drop from 5,392 to 4,612 since 2010, according to data presented to county officials Wednesday. This means Nelsonville technically falls below the statutory requirements for a city, which states a city should have 5,000 residents.

According to the Ohio Revised Code, following the decennial census, the secretary of state will issue a proclamation stating the municipality’s status as a city or village and their official population numbers.

“If the result of the census shows that the population of such city is less than five thousand, the legislative authority, by resolution, shall declare the corporate rights of the city surrendered and that each city is reduced to a village,” the Ohio Revised Code states.

City Council member Taylor Sappington said the implications for this shift below statutory city requirements is uncertain, and said Nelsonville’s legal counsel has indicated the city could be shielded somewhat by its charter.

“I don't think there would be dramatic changes,” Sappington said during Wednesday's meeting.

Chmiel and Athens County Planner Paul Logue raised concerns about the tabulation of some of the county's data. Logue said that data at individual blocks do not add up to the total, and raised the possibility that the Census Bureau modified the data to account for college students who were not in the county when the coronavirus pandemic sent Ohio University classes online in 2020.

“There does seem to be within the city limits of Athens some discrepancies within the block level,” Logue said. “It does look to me that there was some attempt to rectify those sources.”

Compared to block data, Logue said, the official count is higher by nearly 3,000 people. He said while he is interested in understanding the methodology, he believes the Athens data is mostly accurate.

Chmiel said research needs to be done on the issues affecting population loss.

“We’re really going to have to look at this stuff on a deeper level, and assess how accurate it really was," he said.

A future meeting could be organized to discuss concerns and the potential of a challenge to the census data.

“This data is really there all the time and it's a tool for us to use to discuss bigger topics,” Chmiel said. “There's a lot to unpack.”

Frank and Sappington both said Nelsonville had “no appetite” to accept the numbers as they are.

“We’d like to explore — there's a challenging mechanism and we will be taking that,” Sappington said.

Logue said he would like to receive some clarity on the data tabulation process.

“It's about having confidence that everything is good,” Logue said.