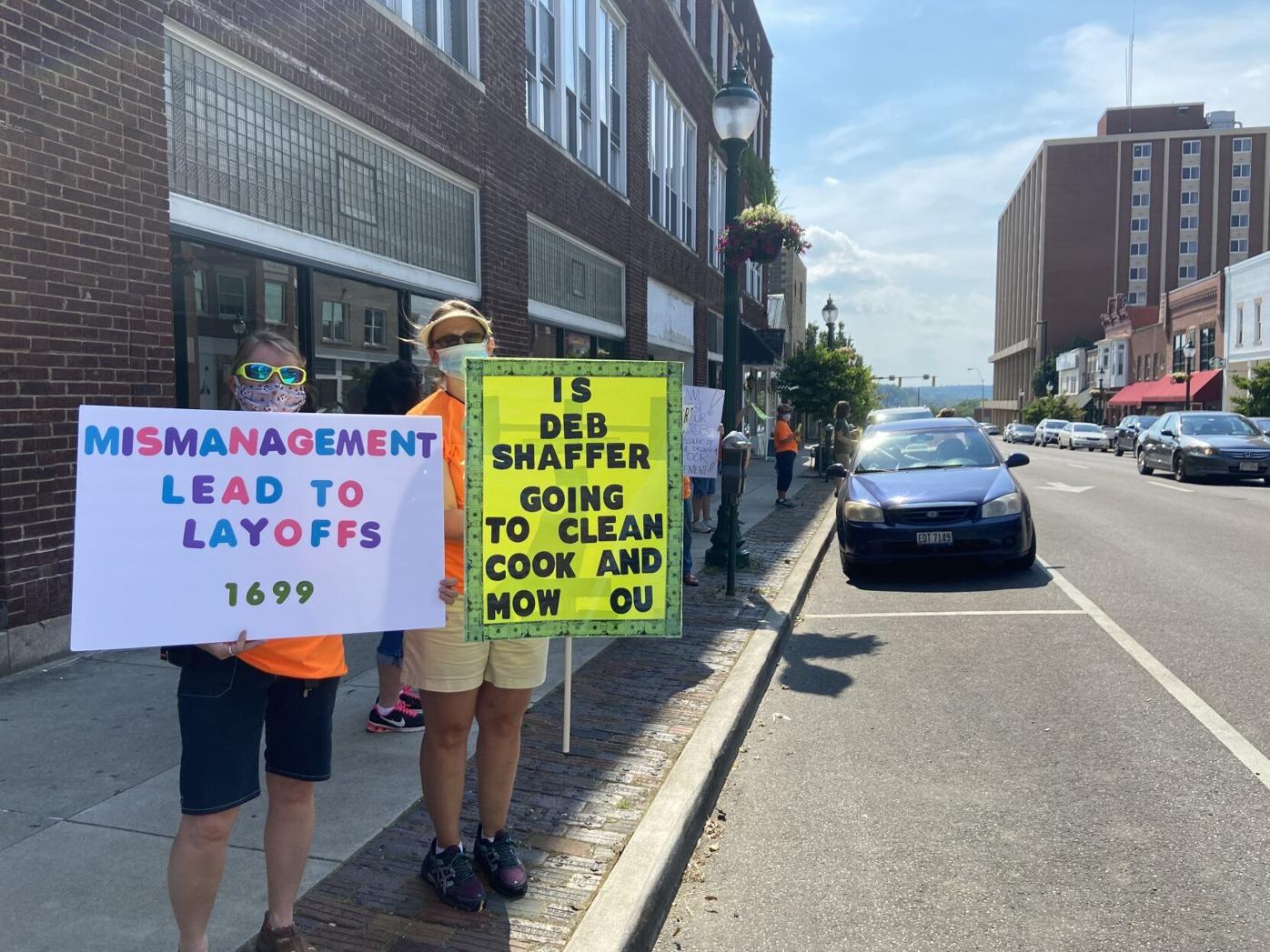 Protesters with the AFSCME Local 1966 held their signs on West Union Street in June in response to the layoffs of 140 union workers. Deb Shaffer is the senior vice president of finance.

Protesters with the AFSCME Local 1966 held their signs on West Union Street in June in response to the layoffs of 140 union workers. Deb Shaffer is the senior vice president of finance.

Ohio University Senior Vice President for Finance and Administration Deborah Shaffer quietly accepted a $100,000 bonus in July after hundreds of university employees were laid off as the institution continues to wrestle with significant budgetary woes.

The bonus was promised to Shaffer, one of highest paid employees at the university, in March 2017 when she and OU’s Interim President David Descutner renegotiated her contract.

They decided Shaffer would be given the payment on the condition that she remain in her position as senior vice president for finance and administration until at least June 2020, the end of the university’s fiscal year, according to a copy of the amended contract obtained by The Athens NEWS.

The bonus, paid out to Shaffer on July 15, was also made at direction of the OU Board of Trustees, a university spokesperson confirmed.

Shaffer, who has worked in her current role since 2016, is widely considered to be at the forefront of restructuring the university’s finances in the face of fiscal troubles and who has played a central role in authorizing university layoffs.

“It was important to the Board then, and remains important today, to strive for continuity of leadership in the fiscal management of the University,” Board of Trustees Chairwoman Janelle Coleman said in a statement. “We continue to be grateful for Deb Shafer’s leadership as we look forward toward long-term financial sustainability for Ohio University. [sic]”

In a regular year, Shaffer makes a base salary of $327,726, however she voluntarily agreed to take a 10 percent reduction to her pay this year because of the added financial strains put onto the university by the coronavirus pandemic.

In May, both OU President Duane Nellis and OU Provost Dr. Elizabeth Sayrs announced that they plan to take a 15 percent salary reduction.

Faculty Senate voted in May to approve a vote of no confidence in both Shaffer and Nellis, condemning their handing of the university’s financial crisis.

OU in recent months laid off more than 400 employees in an effort to cut back on expenses as the pandemic has exacerbated the university’s already aching budgetary issues.

And the university, the single largest employer in the region by a significant margin, made a concerted effort to offer incentives for certain employees to retire early. At least 88 employees, many of whom were faculty members, accepted early retirement deals.

More than 200 instructional faculty and administrators, 140 skilled-trade workers in the ASFCME Local 1699 union, and 81 clerical and technical employees have all lost their jobs since May, prompting several Uptown protests where many expressed a great sense of anger at administrators taking what they call exorbitant bonuses.

These top administrators destroy the local economy and move on after years. OU is just a stepping stone to bigger things.

OU in recent months laid off more than 400 employees in an effort to cut back on expenses as the pandemic has exacerbated the university’s already aching budgetary issues.

The author of this should look at her new contract if he hasn't. Rumor is there's another performance or longevity bonus in it as well. Also what other administration officials have bonus incentives in their contracts?

Verges on the criminal.

Her house is also for sale and rumors are she has accepted a job in Florida. These top administrators destroy the local economy and move on after 2 or 3 years. OU is just a stepping stone to bigger things. They have no vested interest in Athens County and area.

If you look at the track record of Nellis , it's maybe about 3 years at a stint. Time for Duane to move on. along with wife ,Ruthie, who has a 37,000 job at OU . That might be an interesting job description.

OU admin corrupt . Sounds like they do business the Trump way.