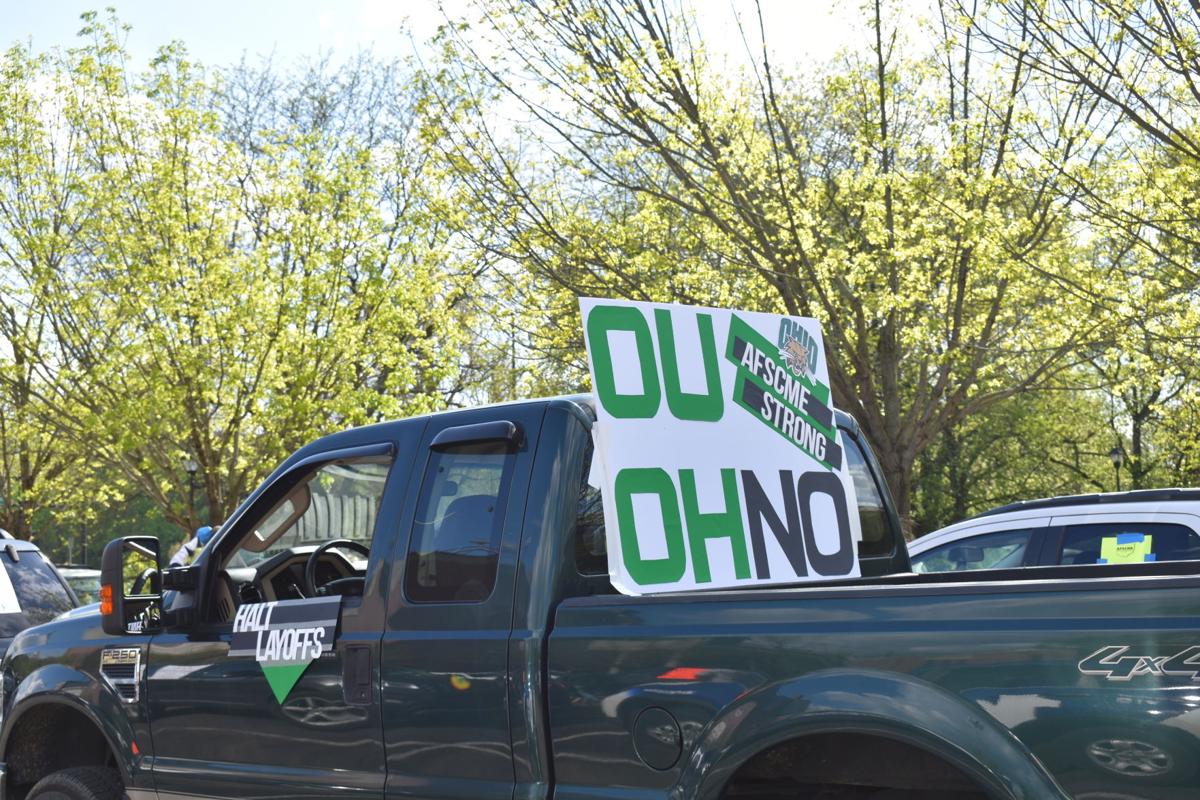 One of the protest signs from the motorcade rally on May 6. Photo by Conor Morris. 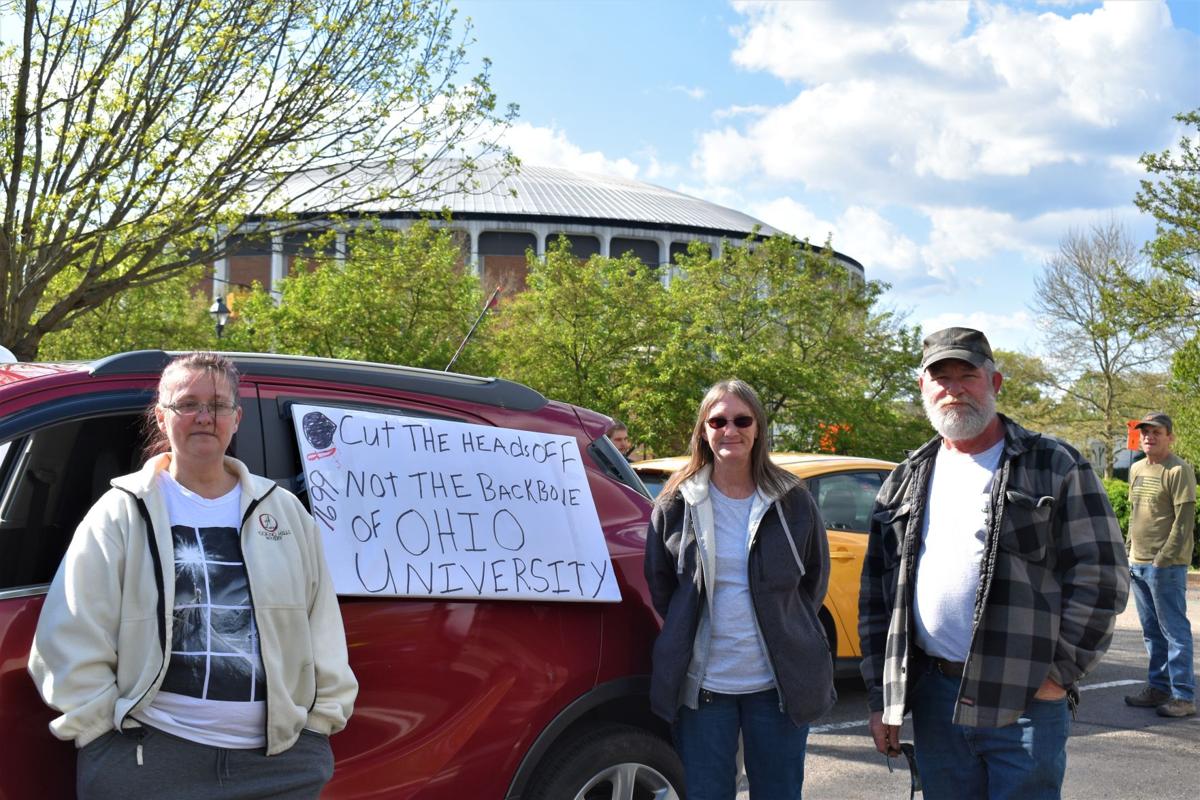 OU AFSCME Local 1699 workers Carol Garlock, Mary Imboden and Larry Klein showed up to the motorcade rally – which gathered in OU's Peden Stadium lot – to protest the recently announced layoffs of the union local's workers. Garlock and Klein both said they were given their layoff notices on Friday, and Imboden said she's worried she will be laid off too.

One of the protest signs from the motorcade rally on May 6. Photo by Conor Morris.

OU AFSCME Local 1699 workers Carol Garlock, Mary Imboden and Larry Klein showed up to the motorcade rally – which gathered in OU's Peden Stadium lot – to protest the recently announced layoffs of the union local's workers. Garlock and Klein both said they were given their layoff notices on Friday, and Imboden said she's worried she will be laid off too.

A group of Ohio University alumni have banded together with OU faculty members to create a website devoted to advocating on behalf of OU instructors who might soon face layoff notices.

The website, called “My OHIO Is...” (myohiois.org), is encouraging people to send letters to OU President Duane Nellis, other OU administrators and OU’s Board of Trustees, and is also collecting testimonials from graduates and others who are speaking out about the positive impact their instructors had on their lives.

The site also reiterates the demands made during a motorcade-style protest in Athens on Wednesday last week: for the university to halt all layoffs during the duration of the coronavirus (COVID-19) pandemic, reinstate those who were laid off during the pandemic, and set all employees’ salaries at a maximum of Ohio Gov. Mike DeWine’s salary ($153,650). The OU chapter of the American Association of University Professors and the local 1699 chapter of the AFSCME union put on that joint protest (more on that below) last week after OU announced the Friday prior that it would be laying off 140 of those AFSCME workers.

The NEWS reported on that same day (May 1) that some academic instructors in the university’s College of Arts and Sciences also learned that they likely will receive non-renewal notices on their contracts. This includes two members of the university’s already-small Women’s, Gender and Sexuality Studies department and potentially at least one instructor in the African-American Studies program. However, OU Provost Elizabeth Sayrs has said that no decisions have been made yet on terminating faculty members’ contracts.

That hasn’t stopped a wave of outrage from bubbling up from many OU students, alumni and Athens community residents.

That anger is apparent in a press release from the OU alumni group behind the My OHIO Is... group

“The current ferocity of the alumni voice on these actions shows that these departments, and this institution, is really a community, not just classrooms,” group spokesperson Hannah Ticoras wrote. “We wanted to create a comprehensive source of information, as there are so many groups both on and off campus –- faculty, students, and alumni around the world – who want to speak out against the current Nellis Administration’s actions. After talking amongst our group, we kept coming back to the idea that by cutting these positions, we are diminishing the value, not only of the years of service given by these faculty members and unionized workers, but of Ohio University as a whole. We are reading hundreds of comments daily from alumni testifying that their lives are changed by the faculty members whose jobs are being terminated.”

Hannah Koerner, a 2017 OU graduate with a bachelor’s in English, said in one of the testimonials on the website that she chose OU because of its faculty members; she also worried about what would happen to the university without some of those instructors.

“I chose Ohio University because it offered a holistic liberal arts education with small classes and brilliant professors,” Koerner wrote. “It was entirely unique. I studied English but took life-changing classes in WGSS that gave me theoretical frameworks, an understanding of world politics, and introduced me to the professors who shaped my college experience and wrote my recommendation letters. Without those classes and relationships, I would not have been prepared to work in international publishing. And without adequate departments, faculty, and resources, I would never again recommend Ohio University to prospective students. Cuts to faculty will endanger everything that makes OU unique.”

MEANWHILE, back on Wednesday evening last week, a long line of more than 200 honking cars moved through Ohio University’s campus and uptown Athens, with colorful signs decrying the layoffs announced the Friday prior.

Prior to that, the motorcade rally filled the OU Peden Stadium parking lot with vehicles

and ralliers decked out in facial coverings. Several speakers assailed the OU administration for what they called mismanagement of the university’s budget for years leading up to the current pandemic.

A wide variety of people attended, including OU faculty, students, and plenty of AFSCME union members and supporters.

Jennifer Fredette, communications director for the OU AAUP group, said that it was important for top OU officials to see the support the protest garnered.

“We’re a pretty diverse coalition; we rarely come together in this way, but we’re united by two really powerful things: our love of being together at this university and our determination that the budget cuts start at the top,” Fredette said.

Two members of the 1699 staff who received layoff notices, Carol Garlock and Larry Klein, said they’re upset by the suddenness of the layoff notices given on May 1. They both also voiced anger at the high salaries of OU administrators. Klein referenced top administrators such as OU Head Football Coach Frank Solich, who makes $524,928, and OU President Duane Nellis, who makes $489,357 (before a voluntary 15 percent salary cut).

“People are not coming to this school,” Klein said, referencing OU’s recent enrollment downturn. “So, they (administrators) are not doing their job, and yet they get paid this kind of money?”

Klein also worried about what kind of employment the laid-off workers will find in Athens County (which is the poorest county in Ohio by some metrics).

Garlock, a single mother of three, agreed. “A single parent like myself will never be able to find a job within Athens County that will be able to support their family,” she said.

OU spokesperson Carly Leatherwood said in a statement issued shortly after the rally Wednesday evening that OU “appreciates the expression of concern by our employees” today.

“While we understand that the goal of the rally is to halt decisions related to layoffs, that is not something we are in a position to do,” Leatherwood wrote. “The realities of the financial impacts of the COVID-19 pandemic on all industries including higher education institutions has not left Ohio University immune.”

Leatherwood noted that Gov. DeWine recentlty announced roughly $110 million in budget cuts to Ohio’s higher education system, of which OU is seeing a decrease of around $6.6 million in funding over the next two months. She added that recently provided refunds to OU students for housing and meals cost the university a lot, around $18 million as The NEWS previously reported.

“The difficult decisions being made are based on many factors including the availability of work, reduced demand for programs and services, and reduced funding available,” Leatherwood wrote. “We take no pleasure in making these difficult decisions, but the reality is the majority of the institution’s operational costs are in its employees, and we must address the largest share of our budget while we simultaneously strategically plan for the future of our great university.

“These decisions are not made lightly or without the weight of the very real and direct impact on people – people with whom we have worked alongside and who are valued colleagues,” she added.