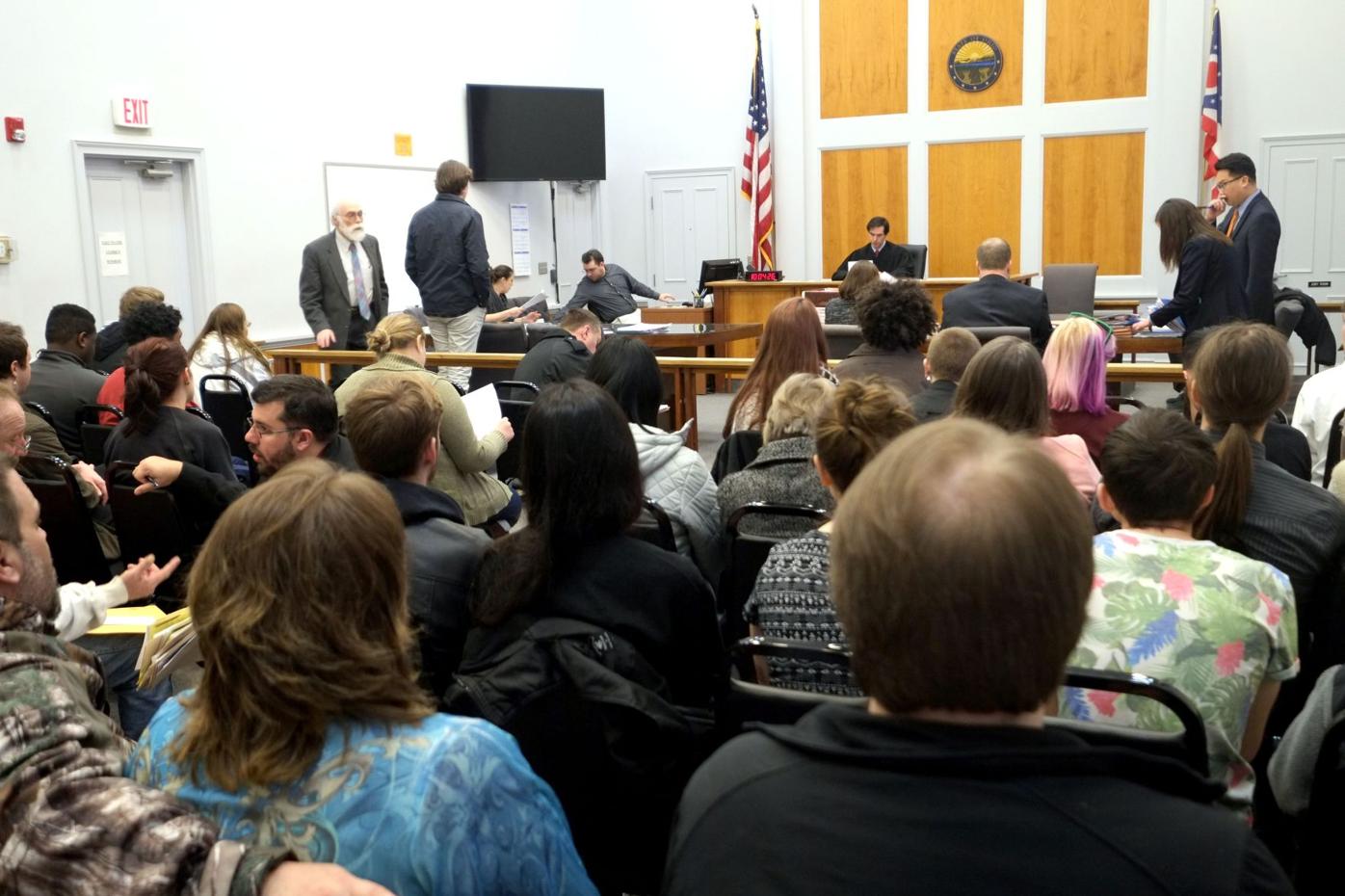 Represented by local attorney Pat McGee, David Shively, standing at left, was the first of the so-called Baker 70 to face the judge. He pleaded no contest to a reduced charge of disorderly conduct, with $100 suspended (of a $150 fine) on the condition he commit no further offenses. 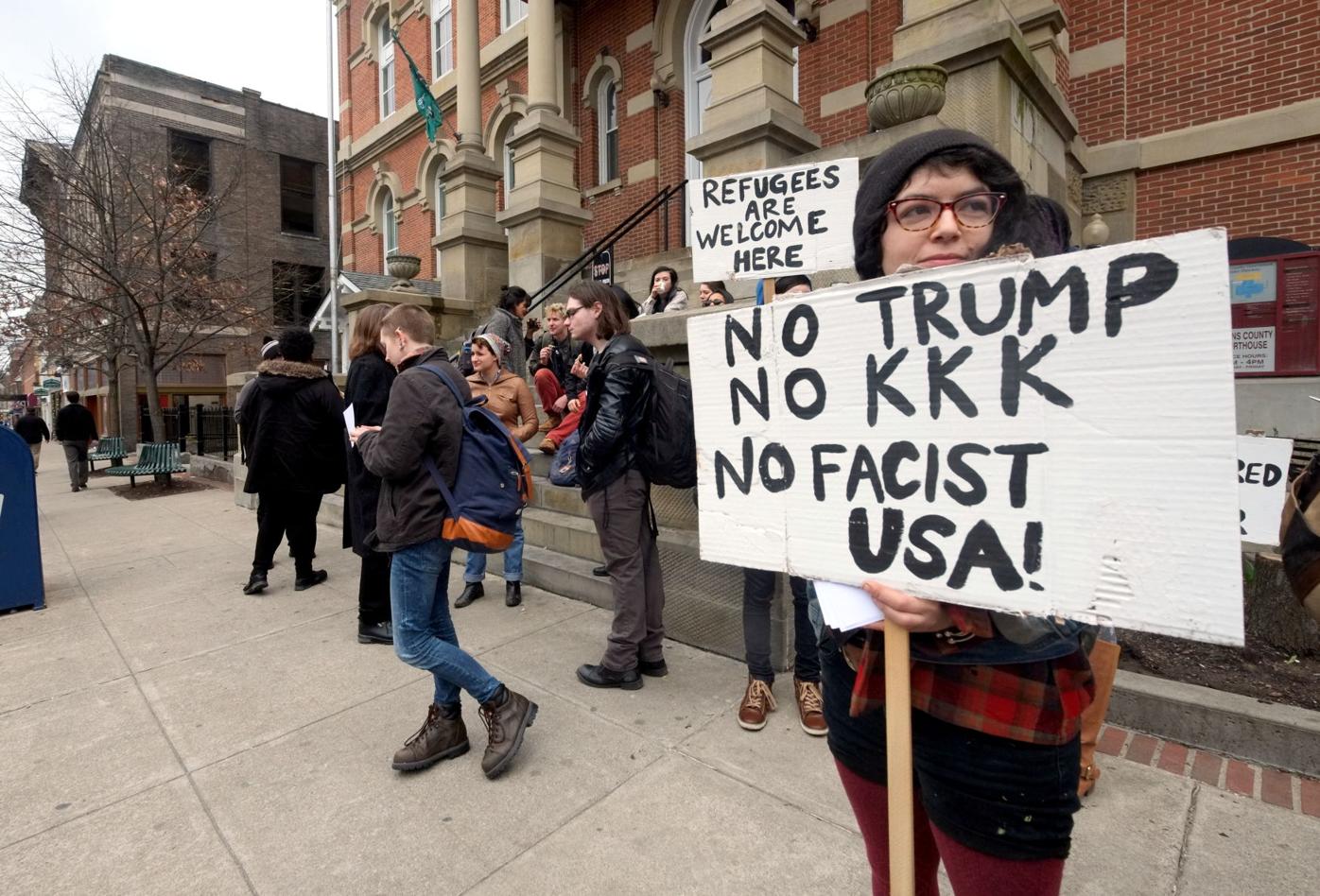 Students and other rallied in front of the Athens County Courthouse this afternoon in support of the 70 people who were arrested during a sit-in protest at Baker Center in early February.

Represented by local attorney Pat McGee, David Shively, standing at left, was the first of the so-called Baker 70 to face the judge. He pleaded no contest to a reduced charge of disorderly conduct, with $100 suspended (of a $150 fine) on the condition he commit no further offenses.

Students and other rallied in front of the Athens County Courthouse this afternoon in support of the 70 people who were arrested during a sit-in protest at Baker Center in early February.

Fifteen of the 70 Ohio University students and others who were charged with criminal trespassing during a sit-in protest at Baker Center in February today took a plea deal in Athens County Municipal Court.

Those who took the deal pleaded “no contest” to a minor misdemeanor charge of disorderly conduct. Meanwhile, five others from the larger group of protesters have decided to challenge the criminal trespassing charges in court, and have a bench trial set for March 20.

Pat McGee, managing attorney at the Center for Student Legal Services, is representing many of the students, and said today that charges against the other 60 students are pending. He said they are waiting to see how the bench trial goes.

One of the students who took the plea deal, Grant Stover, said the agreement was a “strategic” decision rather than an admission of guilt.

“By arresting and pressing charges against 70 people, the Ohio University administration has diverted attention away from our demand to make Ohio University a ‘sanctuary' campus,” Stover said in a press release. “We are accepting this deal to direct attention back to where it should be – on the need for a sanctuary campus.”

Meanwhile, interim OU President David Descutner released a statement Wednesday addressing the student protesters, who were arrested during a sit-in demonstration on Feb. 1 in Baker Center that railed against U.S. President Donald Trump’s immigration policies and asked OU to become a sanctuary campus. For background on the protest, see this story.

Descutner wrote in his letter that he has listened to OU’s Faculty and Student senates, which both have called for the university to request the charges against the students be dropped, as well as OU Police Chief Andrew Powers. He said he recognizes that the protesters were “standing up for vulnerable populations on and off campus,” and said it's important to appreciate the students who protested.

Descutner said he has been asked to consider requesting the charges be dropped against the protesters, and to consider asking the university to not sanction the student protesters. He is not willing to do either, he said.

“I am unwilling to do so because I believe the students received due warning from the police and chose to be arrested,” Descutner wrote. “We have had similar events in the recent past where students were protesting and received warnings that they would be arrested. Some chose to be arrested and, as a result, faced charges and university sanctions. In those cases, the university did not intercede in the legal process and did not waive the sanctions. I cannot justify treating the 70 (Baker Center Feb. 1 protest) students differently.”

McGee said that students’ money goes to support Baker Center operations, and as such, they have a right to sit and express themselves in that building.

Descutner in his letter also reaffirmed his support for Chief Powers and the OU Police and their actions during the sit-in protests, echoing statements from former OU President Roderick McDavis.

“I have great confidence in him as a professional and as someone who cares about the welfare of our students, and I have the same level of confidence in his officers,” Descutner said. “I believe that Chief Powers had a difficult call to make that night, and I stand by his decision.”

“I think the failure of administration to come and speak to the protesters at the (sit-in) event really contributed to the escalation…” Young said. “I think that that was a failure of leadership… It may (also) be indicative of a new policy at the university about how to handle protesters, but it may not. If it is, that policy should be made public.”

In the press release from the protesters, student protester Bobby Walker said OU should become a sanctuary campus given Trump's "escalation" of immigration enforcement.

“Since our arrests, the attacks on immigrants and refugees has escalated significantly, making these sanctuary campus policies even more necessary.” Walker continued, “Gestapo-like raids by Immigration and Customs Enforcement (ICE) are taking place across the country."

Descutner chose his new relationship with the Chief of Police over the Faculty & Student Senates. Let's see how long he can effectively lead by alienating his faculty and student body in support of a University police chief attempting to save face. It was bad enough McDavis didn't have the courage to address this prior to leaving. We can only hope that the term interim truly means interim. It is important that the faculty truly be heard after this cowardly statement from Descutner.