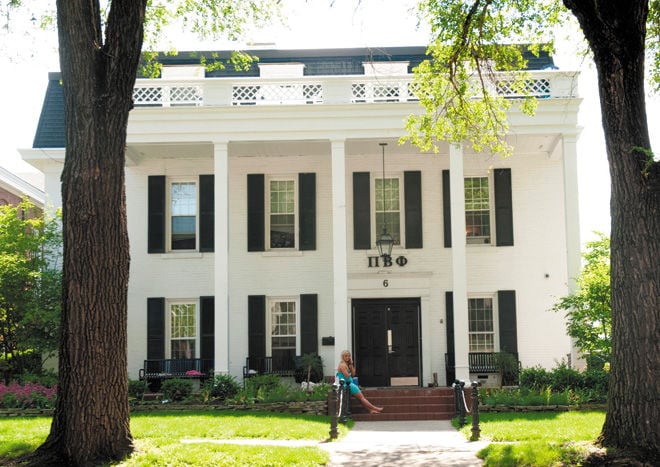 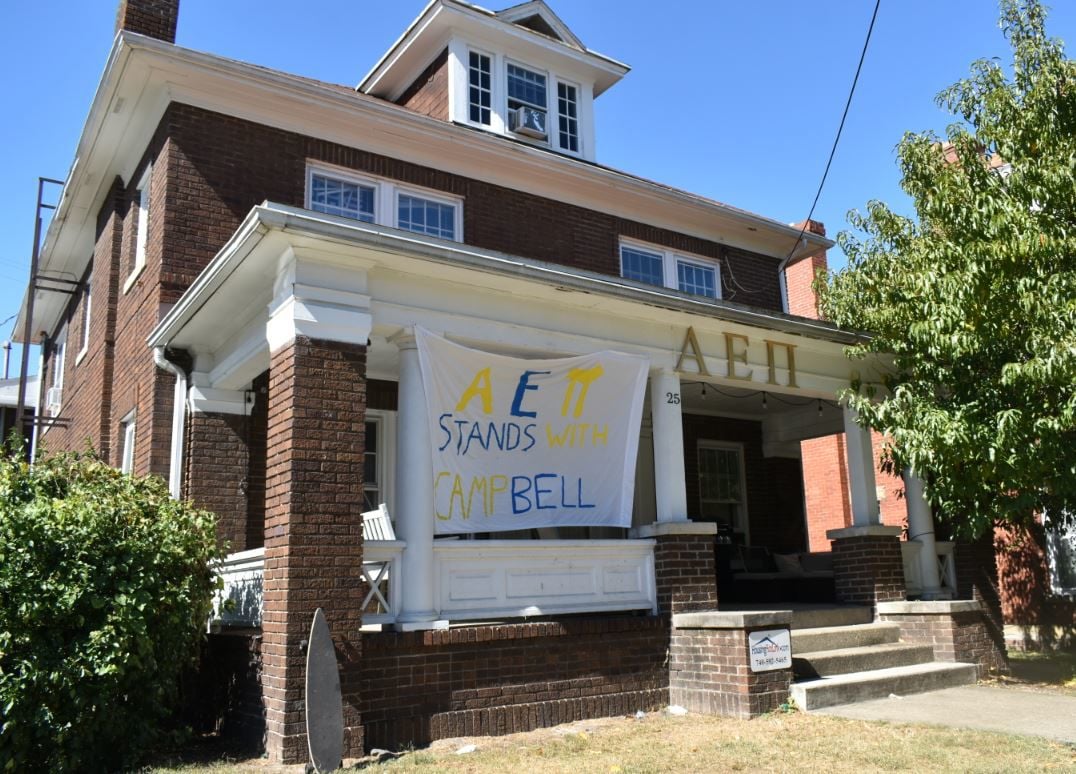 The front of the OU Alpha Epsilon Pi chapter. Photo by Conor Morris.

The front of the OU Alpha Epsilon Pi chapter. Photo by Conor Morris.

Ohio University generated national headlines after moving to suspend the organizational activities of all 15 OU fraternity chapters in the Interfraternity Council (IFC) last Thursday in response to allegations that seven of those fraternities had engaged in hazing activities.

OU spokesperson Carly Leatherwood said this week that within a 48-hour time period between last Monday and Wednesday (Sept. 30 and Oct. 2), hazing allegations were leveled against an initial seven IFC fraternities.

Additional hazing allegations were leveled against two more IFC fraternities between Oct. 3 and Oct. 7. Meanwhile, Leatherwood reported Wednesday evening that the university had moved to suspend three WPA sororities and business fraternity Pi Chi Theta after hearing similar allegations in the time since.

However, Leatherwood wrote that the university does not yet see a reason to suspend all sorority and professional fraternity chapters.

"At this time, we do not have reason to believe there is a systemic culture issue within the Women’s Panhellenic Association organizations nor within our professional fraternal organizations," she said. "However, decisions are made on a case-by-case basis, and the university reserves the right to take additional action as needed at any time."

The IFC fraternities are the traditional male greek organizations on campus, and according to OU’s website, include nearly 1,000 members. The WPA is the governing body for 10 traditional female sororities at OU, which includes more than 1,800 members.

The cease-and-desist directive issued last Thursday meant that all 15 IFC chapters must stop any organizational activities and can no longer meet in any capacity – officially or unofficially – while the university investigates them. It does not mean they have to move out of fraternity housing.

The first fraternity chapter to receive such an order was Acacia, with OU announcing Sept. 30 that the fraternity allegedly had placed the “health and safety” of its members at risk.

OU spokesperson Carly Leatherwood this Monday confirmed the names of eight of the fraternities with allegations of hazing against them, and the names of the sororities on Wednesday. However, the temporary suspension covers all 15 fraternities in the IFC.

Leatherwood explained that the OU Police Department reviewed the initial reports of hazing against the eight fraternity chapters and the three sororities and Pi Chi Theta, and “so far, none of those have risen to the level of actionable criminal activity.” The OUPD is still reviewing the allegations against the ninth IFC chapter, which as of Wednesday morning remained unnamed by OU officials.

The eight fraternity chapters that are the subject of the administrative investigation by OU are:

Meanwhile, the names of the three sorority chapters are:

The fact that all 15 fraternities were suspended despite not all being directly accused of hazing triggered a statement late Thursday afternoon, Oct. 3, from Judson Horras, president and CEO of the North American Interfraternity Conference, who criticized the punishment of eight IFC chapters for whom no hazing allegations had been leveled.

“Hazing is a serious societal issue, and we strongly believe in holding individuals accountable,” Horras said in the emailed statement. “However, Ohio University’s suspension that impacts students not accused of misconduct is not the right approach to address this critical issue. It disincentivizes students who are following the rules.”

That sentiment was echoed by a member of a group of apparent fraternity members interviewed earlier this week by a reporter with CBS Evening News in a now-viral video clip shared on Twitter.

“We need to get this figured out as soon as possible because it is not OK,” he said. “One bad seed does not ruin a whole pumpkin patch.”

Asked about details of the alleged hazing, Leatherwood said, “What I can tell you for now is that we cannot release the details during an active investigation.”

She responded to criticism about the way the university is handling the matter by stating, “This decision was not entered lightly.

“This does impact students who have not participated in hazing or other negative behaviors, but it is important to understand that student safety is our top priority. Due to the escalation of these reported allegations within a short 48-hour timeframe, we needed to collectively take an opportunity to make sure we all are on the same page with our values and behaviors.”

Still, Leatherwood said some of the fraternities have a path forward for quicker reinstatement.

“Those fraternities who are not under active investigation will be able to work closely with our Sorority and Fraternity Life office in the upcoming weeks to develop a plan for reinstatement,” she wrote. “We have committed that we will not wait until all investigations are completed to lift the blanket suspension. Fraternities will have an opportunity for reinstatement on a case-by-case basis.”

With many fraternity members returning to Athens as alumni this weekend for Homecoming, they likely will be wondering how the blanket suspension of all 15 IFC members will affect Homecoming activities.

According to Leatherwood, “We understand that Homecoming is an important time for alumni of sorority and fraternity life as they return to campus. As such, the alumni-only events will be permitted on a case-by-case basis. Questions related to alumni only events should be directed to the Dean of Students Office at deanstu@ohio.edu.

OHIO UNIVERSITY issued a cease-and-desist order last year to the OU chapter of the Sigma Pi fraternity after 18-year-old OU student, Collin Wiant – who allegedly was a pledge of that chapter – died of asphyxiation due to nitrous-oxide ingestion at a party at 45 Mill St. in Athens, which allegedly was an unofficial annex of that fraternity chapter.

That chapter was expelled from OU last April for multiple violations of OU’s alcohol and hazing policies, The NEWS previously reported.

Wiant’s death is the subject of a lawsuit in Athens County Common Pleas Court by Wiant’s parents against the former local and national chapters of that fraternity. The suit alleges that Wiant was the victim of hazing by the fraternity, and was provided with, or forced to take, “illegal drugs containing nitrous oxide” by fraternity members, with small canisters of nitrous oxide found near his body (commonly referred to as “whippets”).

The fraternity’s local and national chapters denied those allegations in responses filed earlier this year, including the claim that Wiant was a pledge at the time of his death.

Rex Elliott, partner with Columbus law firm Cooper & Elliott, represents the Wiant family in that suit. He said Monday that he thinks OU’s suspension is a good step.

“I think in reality it does indicate that there is a hazing problem at Ohio University; there has been for a very long time,” Elliott said. “We applaud the university in taking this step even though we think it should have been taken years ago. I’d take it a step further. I think OU has a chance to be the model in this country about what universities should do, in other words, making sure that fraternities and sororities can create a positive culture without hazing; if they can’t, they won’t exist.

A letter was sent to all 15 of the IFC fraternities Thursday (Oct. 3) from OU Dean of Students Jenny Hall-Jones notifying them of the suspension.

“These troubling allegations, which will be thoroughly investigated, indicate a potentially escalating systemic culture within our IFC organizations, and Ohio University will not put at risk the health and safety of our students,” Hall-Jones said.

The dean of students directly connected those allegations of hazing with the decision to suspend the fraternities’ activities. The suspension does not involve any of the other councils representing OU fraternity or sorority chapters. Those include the Multicultural Greek Council, the National Pan-Hellenic Council (traditionally black letter organizations), the Women’s Panhellenic Association (sororities), and various honor societies and committees.

“This proactive step is being taken so that the IFC community can pause to reflect and create actionable strategies for the future,” Hall-Jones wrote. “To ensure the future of fraternity life on our campus, innovative practices will need to redefine our Greek community so that it positively contributes to the full well-being of students.”

On various Ohio University alumni forums last Thursday evening and Friday, many alums were calling foul on the university punishing all 15 IFC chapters for the alleged actions of fewer than half of them.

This was a typical reaction on the Facebook “You Know You Went to OU if...” group from an alum:

“Hold those that have offended responsible but NOT those that haven’t done anything wrong. My husband and I were both Greek at OU. BOTH in houses that didn’t haze. With the state of everything lately... It seems like we are now living in a culture where based on an ‘allegation’ whether true or not... Convict the innocent.”

In another post in the same group, Scott Haag, a ’94 OU graduate, condemned the suspension of all 15 traditional fraternities, saying he’s “ashamed to be an Ohio University Bobcat thanks to the heavy-handed ineptitude of the current Dean of Students Jenny Hall-Jones…”

Haag added that he won’t contribute any more money to the university or attend Homecoming this weekend (Oct. 11-13) unless President Duane Nellis or the OU Board of Trustees “reign in” Hall-Jones.

He called upon other alums, especially those in the greek system, to follow suit.

OU President Duane Nellis said in an email to students and staff last Friday that he supports the suspension of the IFC fraternities.

“Yesterday, Dean of Students Jenny Hall-Jones announced an immediate and indefinite suspension of all Interfraternity Council Activities at Ohio University,” he said. “I support this decision and this action, given the escalating nature of the type of hazing allegations that have been coming forward.

“We are proud of the individuals who came forward with their concerns. We will continue to support all of our students and encourage them to act responsibly in all that we do,” Nellis said.

OU posts statuses of suspended fraternity and other groups online

UPDATE: The university revealed today (Thursday) that it's also suspended two other fraternities in addition to the men's rugby club (as expla…

Maybe we need a new word for it. Hazing is too gentle and quaint for what's being done to recruits these days. And Greek houses absolutely refuse to moderate their behavior but any time something bad happens to a student no matter what or where it's the university that gets sued. It's time we evolved past Fraternities and Sororities and they never seem to miss a chance to prove it.