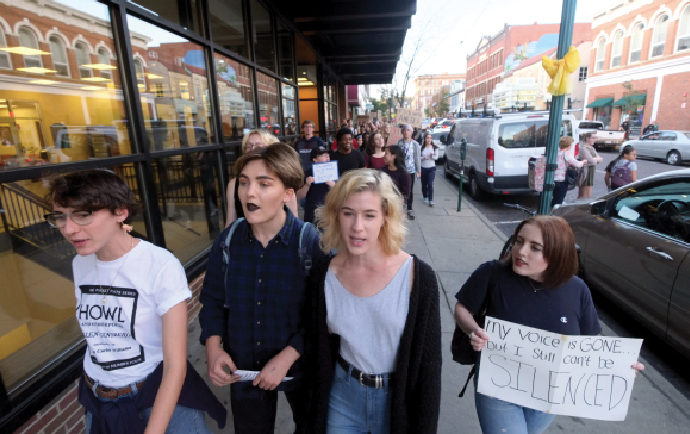 OU students and others protesting the university’s interim speech policies march down Court Street from the county Courthouse to the Civil War Monument on College Green Friday afternoon. 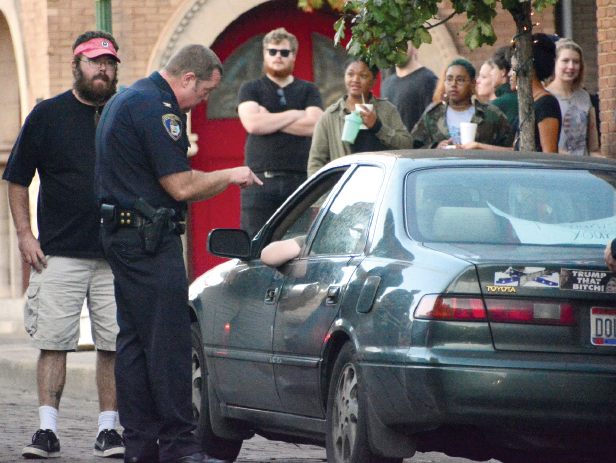 A counter-protester standing across South Court Street from the protest holding a sign stating, “Commie Lives Don’t Matter,” finally got in his car and honked the horn continuously until Athens Police Chief Tom Pyle, pictured pointing his finger at the man, told him to stop. He did, and drove away. 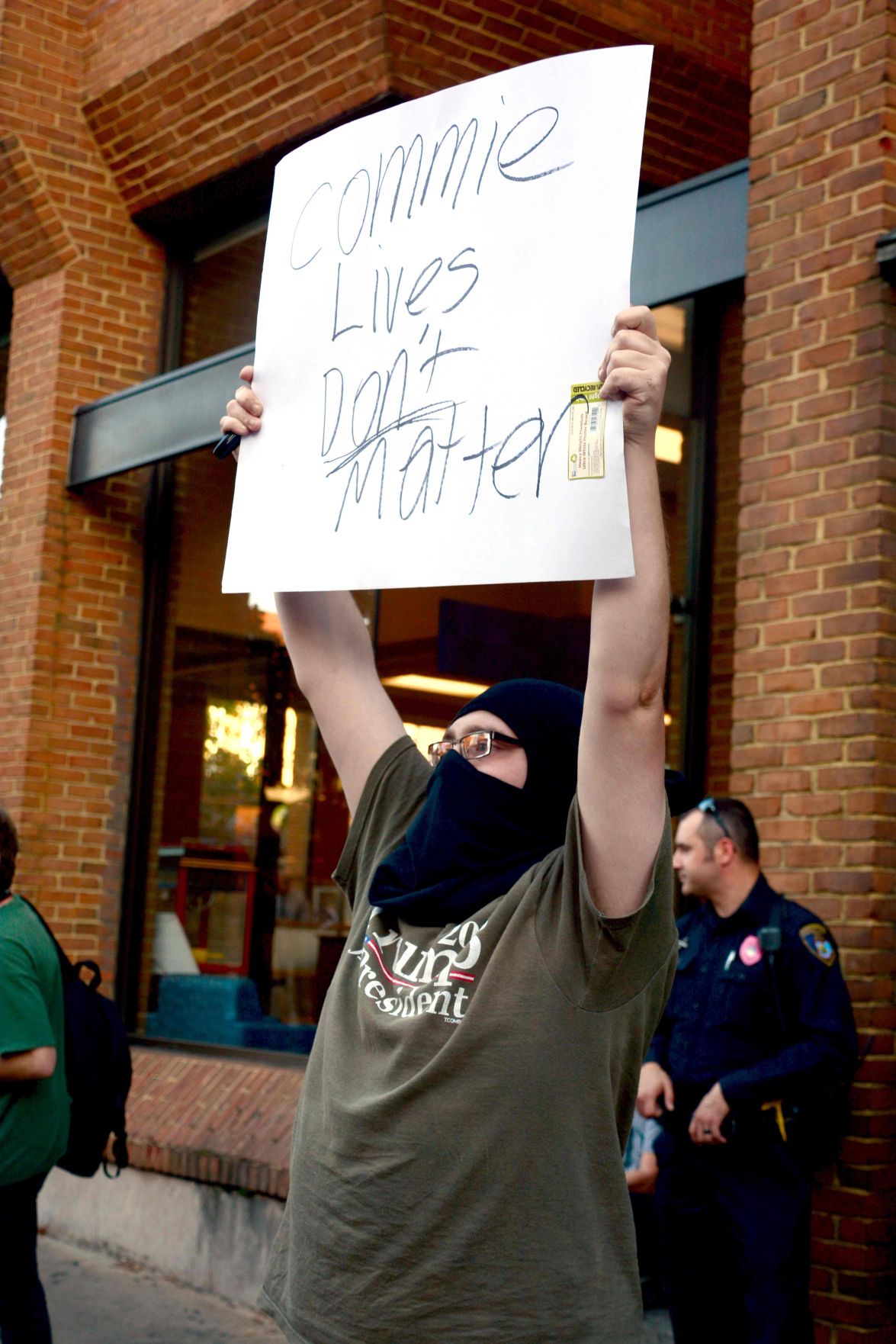 As the protesters assembled, a small counterprotest formed across the street. 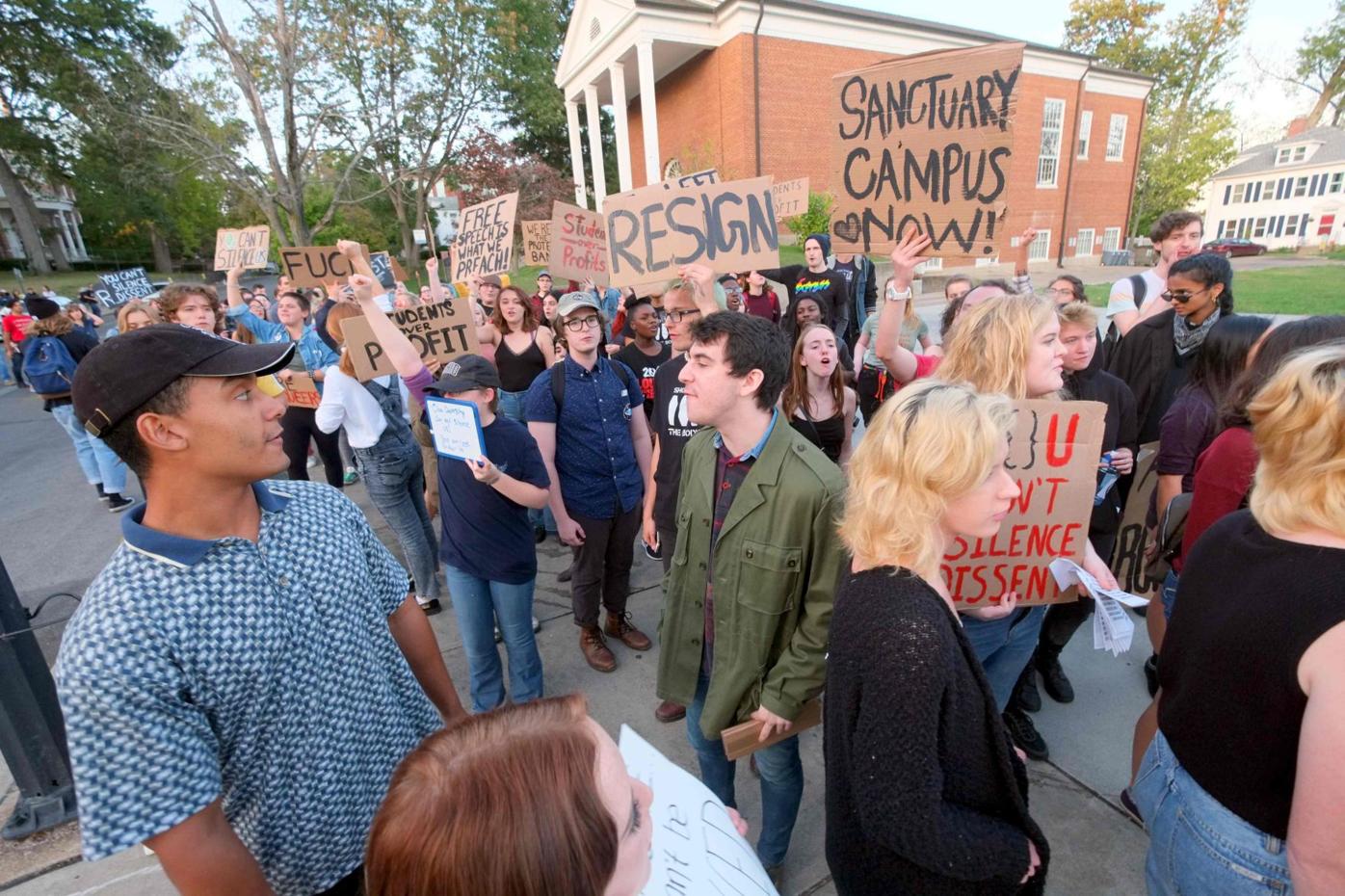 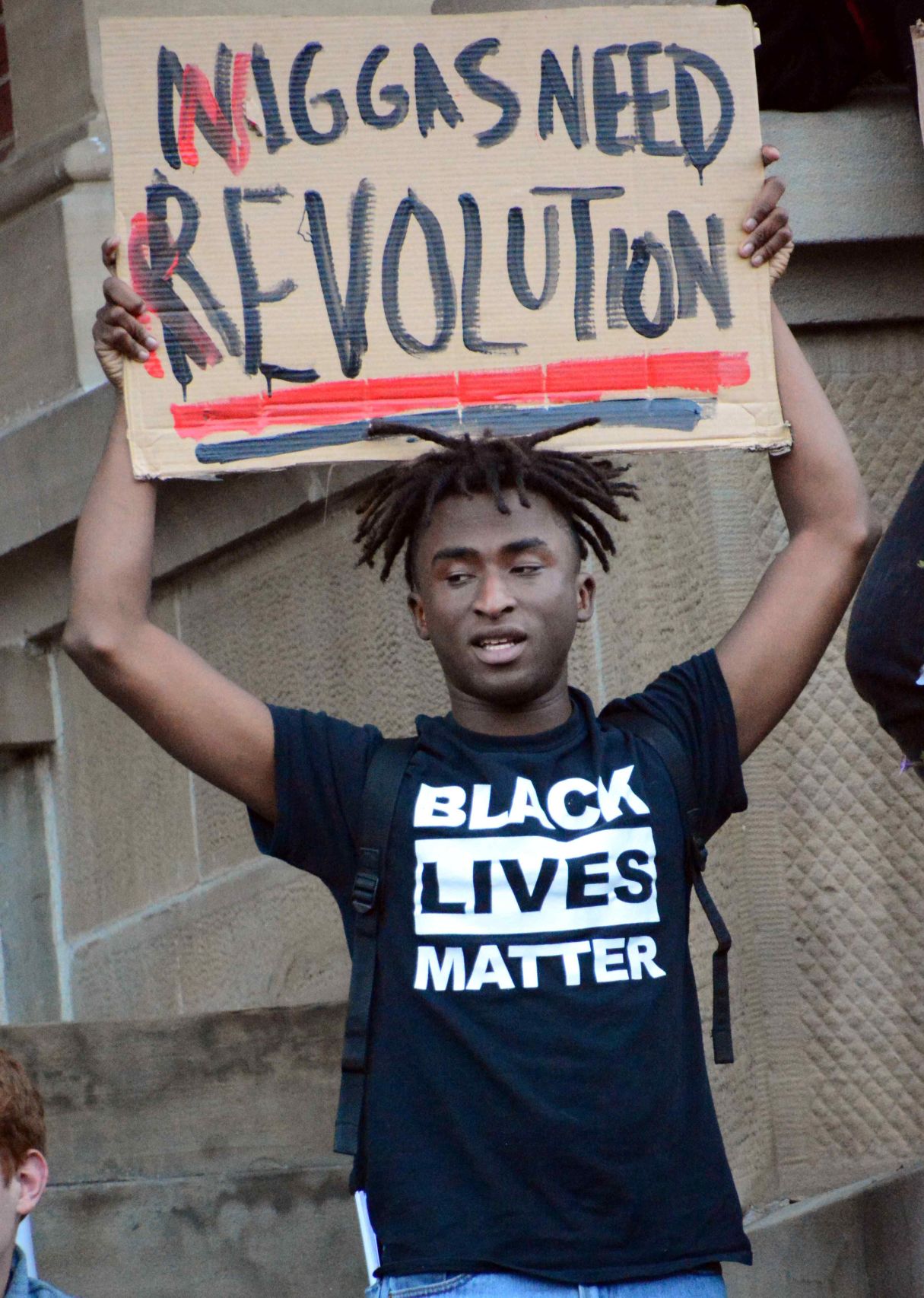 OU students and others protesting the university’s interim speech policies march down Court Street from the county Courthouse to the Civil War Monument on College Green Friday afternoon.

As the protesters assembled, a small counterprotest formed across the street.

A group of approximately 150 protesters assembled on the steps of the Athens County Courthouse Friday evening to protest Ohio University’s new interim policies that critics have accused of restricting free speech on campus.

Protesters later led a march across campus before ending the action at the Soldiers and Sailors Monument on College Green.

Protesters present were not necessarily associated with any political groups on campus. Instead protest organizer Madhulika Pesala describes participants as “individuals opposed to Ohio University policies 24.014 & 24.016, and the general suppression and policing of leftist speech.”

Several members of the Athens chapter of the International Socialist Organization participated in the protest, displaying a banner that promoted their organization. Several protesters also held signs with the group’s solidarity symbol.

Regardless of political affiliation, protesters shared a common goal that was echoed the aforementioned letter to the editor (which also was sent to The New Political).

“The goal… is to begin building a movement in order to get the university to rescind its ‘freedom of expression’ policy, as well as its policy regulating the use of outdoor space,” Daniel Kington, media contact for the ISO, said on Thursday.

The Athens Police Department had a presence at the protest, with around a dozen officers watching and following the protest rally and march from a distance.

Athens Police Chief Tom Pyle said that the APD was there “for safety reasons.”

Protesters took note of the police presence throughout the night.

“They never really say anything to anyone; they just kind of stand and gaze at a distance,” said protester Olivia Stefanoff, an OU student. “I think it’s just all intimidation.”

Moments before the protest was scheduled to begin, a masked counter-protester in a Trump T-shirt appeared across the street holding a sign that disparaged participants of the protest, including the slogan “commie lives don’t matter.” He then left but only after attempting to use his car horn to drown out the sound of the speakers at the protest.

As the official protest began, organizers invited a variety of speakers that included both faculty and students. University professors Ziad Abu-Rish, Catherine Euler, and Louis-Georges Schwartz all gave short speeches about topics ranging from Gandhi to the role of police in society.

After hearing from these first four speakers, protesters left the steps of the courthouse and marched through campus, reciting chants such as “Where is Jenny Hall-Jones?” and “No hate, no fear, immigrants are welcome here.”

After marching through campus, the protest ended at the Monument on College Green, where participants heard from two more former and current student activists.

The first speaker, Prince Shakur, graduated from OU in 2015, and during his tenure at the university gained a reputation as an outspoken progressive activist. At the protest Friday, he spoke of his activism while he was a student and his experiences protesting against the Dakota Pipeline.

The second speaker, Dylan Vanover, a member of the ISO and current undergraduate student at OU, spoke about the protesters’ demands and the consequences for the administration not meeting them.

“If Duane Nellis doesn’t completely repeal this policy by Nov. 8 and put nothing in its place, then everybody, students and faculty, are going on strike,” Vanover said.

As the night drew to an end, members of the protest passed out fliers promoting an upcoming art exhibition that features the “hanging” of the Confederate Flag.

The period for public feedback on OU’s controversial speech policies came to an end on Friday. See a related story today for more information on the policies and what the university’s next steps will be in possibly updating or rescinding them.

The University speech policy is not about silencing your voice, it's about making sure that you respect the rights of others. Far too many protesters seem to have forgotten that the right to speak does not give you the right to shut down the speech of others. It does not allow you to prevent other people from working or studying or going about their daily lives without being harassed or held hostage. The irritating thing about the "Baker 70" incident is that protesters were offered a meeting room to continue their speeches - without disrupting BC operations and safe egress - but they refused. The didn't just want free speech, they wanted to intentionally disrupt the activities of others, to force them to listen. Your right to free speech does not mean that you have the right to force your views on others. The entire point of free speech is to let ideas be heard in order that those ideas might persuade. It is not intended as an open license bully others into submission. I fervently hope that the university stands firm in their policy. Other universities have abdicated to mob rule and are suffering for it. (Mizzou allowed BLM to run rampant and saw new enrollment fall by 35% in two years) OU can not fulfill it's primary purpose of educating students if chaos and mob rule are allowed to reign.

“Edward,” You’re a throwback to the Neanderthal State of the 1970’s and beyond. Missouri U suffers today due to the manner in which administrators repeatedly bungled multiple realities which converged circa 2015, many of which had been simmering long before BLM (founded July, 2013) and the shooting of Michael Brown in 2014.
Much of the unrest was a product of long muzzled dissent and indifference on the part of Missouri U administrators.
Ohio University should take their cue from BLM (that’s the Bureau of Land Management), which continues to suffer from catastrophically explosive events – as does the rest of the nation - resulting from inadequate management and long-term repression.

Typical Swearingenian response:
1. Insult the writer of the post. (Neanderthal)
2. Argue against a minor point in the post without providing any supporting evidence. ("bungled multiple realities" at Mizzou)
3. Divert the discussion to some tangential topic while attempting to appear clever. (BLM vs. BLM?)
4. The only thing missing was a barely relevant cliche or metaphor.

No thanks, not taking the bait.

1) Actually, the statement was that you’re a throwback, as in possessing characteristics predominate of an era. While the depth and breadth of your gene pool is your personal business, you do tend to exhibit far more repressive traits relative to applied social sciences -as if a club is your only answer…
2) While apparent that you’re able to read, the question is whether you’re capable of comprehending anything apart from the pre-packaged rhetoric pawned off as journalism at Breitbart, The Federalist or Fox, even though the following is where all their “stories” on this topic started:
https://www.nytimes.com/2017/07/09/us/university-of-missouri-enrollment-protests-fallout.html
3) The explosive and destructive results of a century of fire repression vs the explosive and destructive results of several centuries of racial repression – as though natural truths can be avoided. Naww! Nuthin’ metaphorical there. Move on…, nuthin’ to see…
4) You may care to have your short term memory checked, having not even turned the corner on #3.

Another fine example of even more standard traits of the Swearingen response:
5. Try to degrade information by assuming a source, (Fox, Federalist, Breitbart) without disputing the actual information, or proving a link to the alleged source.
6. Insinuate that anyone holding an alternate viewpoint must have a mental deficiency ("...have your short term memory checked")
7. Never really address the main point of the original comment. (rules limiting disruptive protests and protecting the rights of non-protesters)

I’m sorry Edward. It’s painfully obvious that I’m no match for your ignorance. You can call it a victory. I’ll call it a day.