More than 100 Ohio University faculty met Thursday evening to air grievances about university administration, and to discuss a plan of action in response to looming budget cuts that they say could drastically damage OU's academic quality.

Although it's far too early to tell, the faculty members present discussed a potential faculty walk-out in response to the administration's handling of the university's budget crisis, as well as talking about possibly attempting to unionize OU's faculty. The meeting was hosted by the OU chapter of the American Association of University Professors (AAUP).

The university administration set a target of roughly $19.3 million in budget reductions last spring that it’s asking OU’s various Athens campus academic colleges to make over the next four years. The largest portion of that – about $8 million – is coming from the College of Arts and Sciences.

The university’s AAUP chapter raised the alarm last month about how those cuts and other proposals could drastically impact the quality of education at OU. The chapter cited potential layoffs of as many as 40 or more "Group II" instruction-heavy faculty members (who are non-tenure track).

Jim Mosher, an OU associate professor who specializes in comparative politics, presented an analysis of university staffing and enrollment data during Thursday's meeting. His analysis suggested that OU's current budget crisis is a result of poor fiscal management by the university over the last decade as well as bloat of administrative staff.

Mosher analyzed inflation-adjusted data showing that since the ’70s, faculty salaries and numbers of faculty employed at OU have largely remained stagnant, while the cost of tuition has continued to rise. During that same time period analyzed, the number of administrators per student at the university has ballooned, with a 45 percent increase in the total size of that staff between 2011 and 2017.

Mosher also took issue with the reasons that he and other faculty said the university has given when asked about the cause of the budget crisis: changing demographics and fewer high-school students graduating in Ohio.

He presented an analysis of Ohio demographical data showing that in reality, the number of 18-year-olds in Ohio has remained relatively stable in recent years, and will only undergo a decline in the next eight to 10 years or so.

Mosher attributed the recent downturn in OU's enrollment to the university's own actions, arguing that it has "priced itself out" with the cost of tuition compared to the quality of students it has attempted to recruit.

After his presentation, many faculty members expressed outrage at the university administration's handling of the budget crisis.

David Ridpath, associate professor of sports management and an AAUP member, took issue with OU's athletics budget, with 70 percent of its funding coming directly from students' tuition (he said each student is paying roughly $1,300 per year to subsidize the athletics department).

Ridpath said that OU's athletics department is typically considered a "sacred cow" and is left untouched during budget cut discussions, despite there being little financial benefits to the university overall from operating the sports program. He said the so-called "front-porch theory" of athletics as the main recruitment tool for a university, which he said has been espoused by OU President Duane Nellis, has long been disproven.

OU President Nellis and Provost Chaden Djalali have stated that OU is not alone in facing budget challenges due to declining enrollment.

“Ohio University is not alone; colleges and universities across the nation are struggling with funding challenges, including the decreasing enrollments in residential programs, affordability issues, rising student debt, and competition from for-profit and other alternatives to four-year universities,” they wrote in a March 24 letter to faculty and staff. “There is a growing need for institutions of higher learning to identify alternative revenue sources and to implement cost-saving measures to create a sustainable financial future.”

David Hokanson, a Group II faculty member in OU's College of Business, said in a comment shared during the meeting (he was viewing the event remotely) that he already has been informed that his contract will not be renewed because of the budget crisis.

"It has become clear that Group II faculty are clearly second-class citizens in the university structure," he wrote.

AAUP President Loren Lybarger said he's open to his organization working on a petition drive for unionizing OU's faculty, as well as a walk-out, but said faculty need to all communicate with one another and band together.

"Does it have more weight now with 100 people in this room?" White asked. "I hope so... I think part of the strategy has to be, you don't even know what your gen(eral) ed(ucation requirements) is going to look like and you're releasing some of our most committed teachers who are committed to that mission."

White was speaking about an upcoming revision to OU's general education structure that a leadership team (which is lead by faculty members) at OU is working on. Meanwhile, OU's Group II faculty – who could be most impacted by the budget cuts – are the ones who teach the bulk of those courses.

OU Provost Chaden Djalali said in a statement last week that both administrative and academic units are in the early phases of building their budgets for the next fiscal year.

"Part of that process includes implementing academic strategies to rebalance the operating budget as part of the University’s Strategic Framework," Djalali wrote.

He added that academic deans are evaluating "all programs to identify potential candidates for program sunsetting, right-sizing, or merging within and across colleges."

"We also have asked administrative division leaders and academic deans to develop plans that identify opportunities for administrative and academic efficiencies, as well as strategic repositioning," Djalali said. "It is essential that we reduce redundancy and streamline program offerings so we are positioned to purposefully reinvest in programs that deliver value to our students."

OU administrators are set to have an "open house" on "reimagining the academic enterprise" with faculty, students and staff from 10:30 a.m. to 5:30 p.m. next Thursday, Nov. 21, in Baker University Center Room 242, OU spokesperson Carly Leatherwood said Friday. 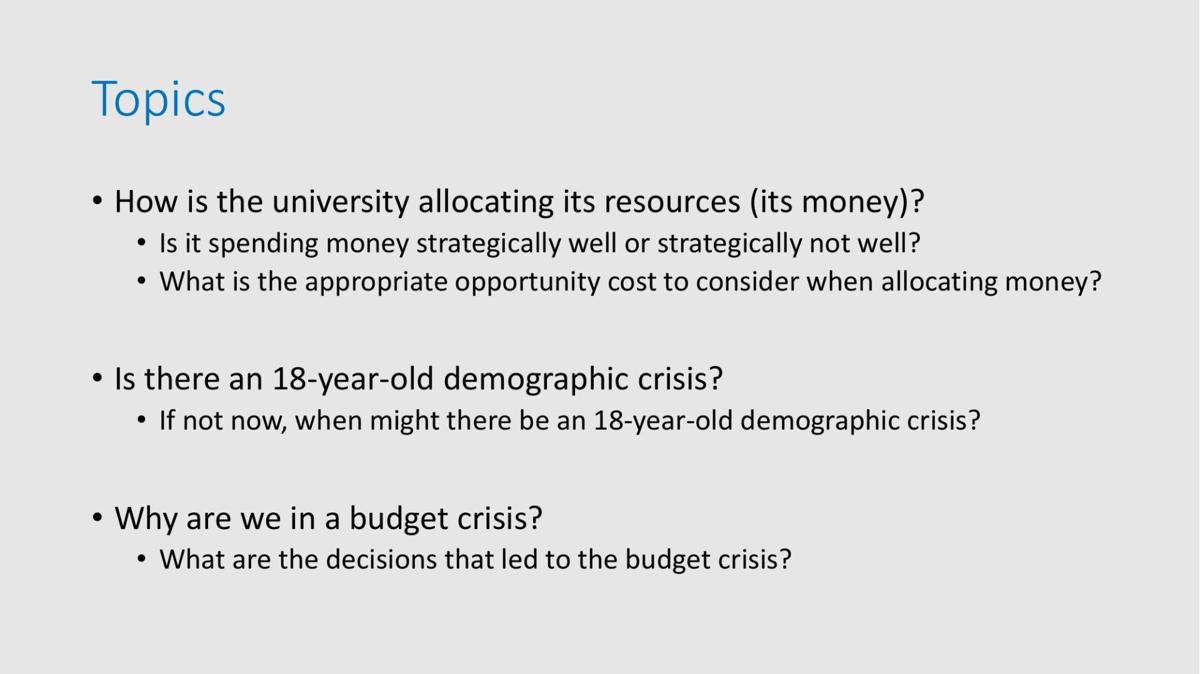 The NEWS will have more takeaways from this meeting and other information in our Thursday edition next week. You can also see a copy of Mosher's presentation attached to this story.