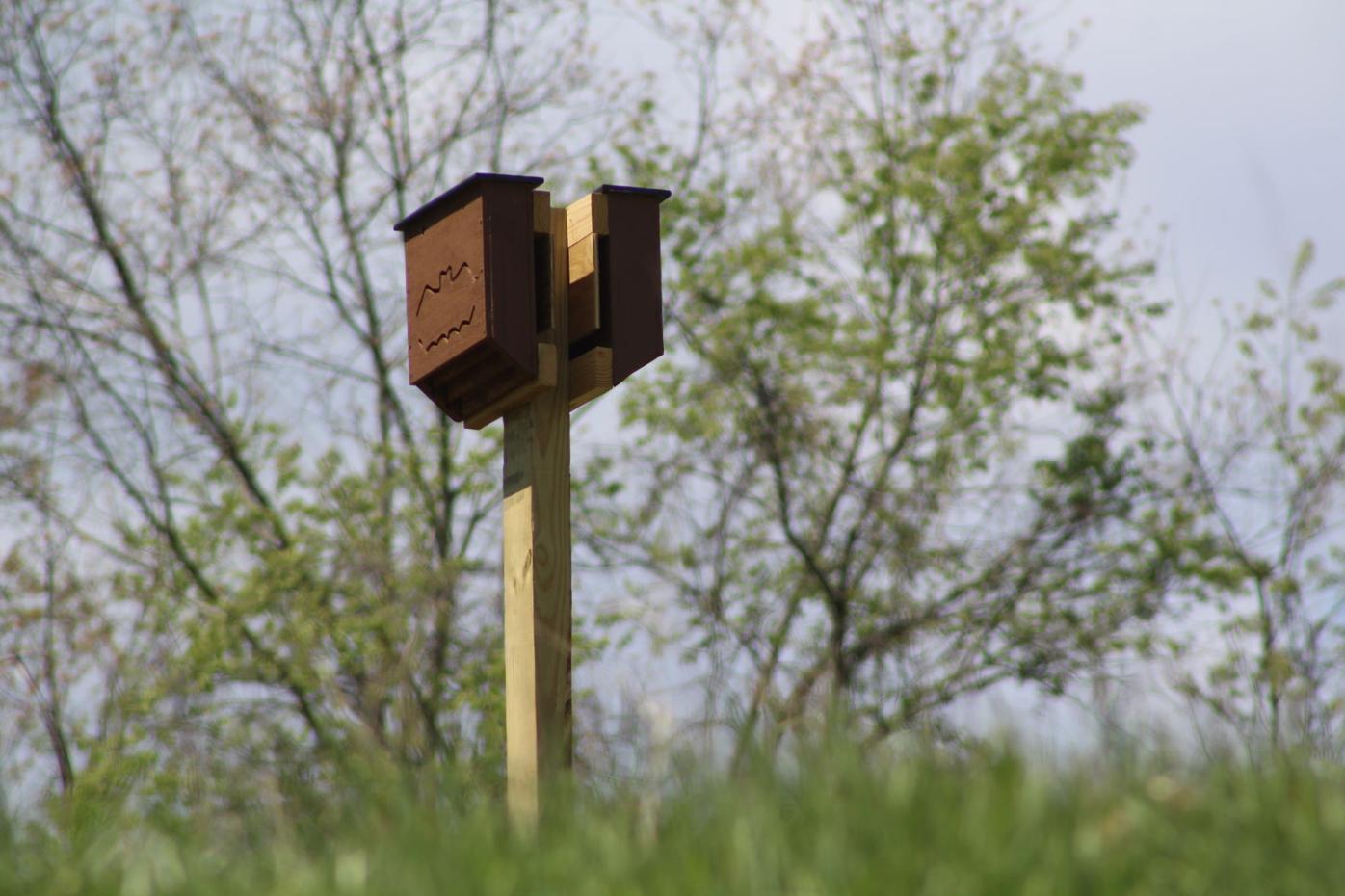 These two bat dwellings may look short in stature, but they tower several feet into the air atop the hill near the mini-golf course at The Ridges. 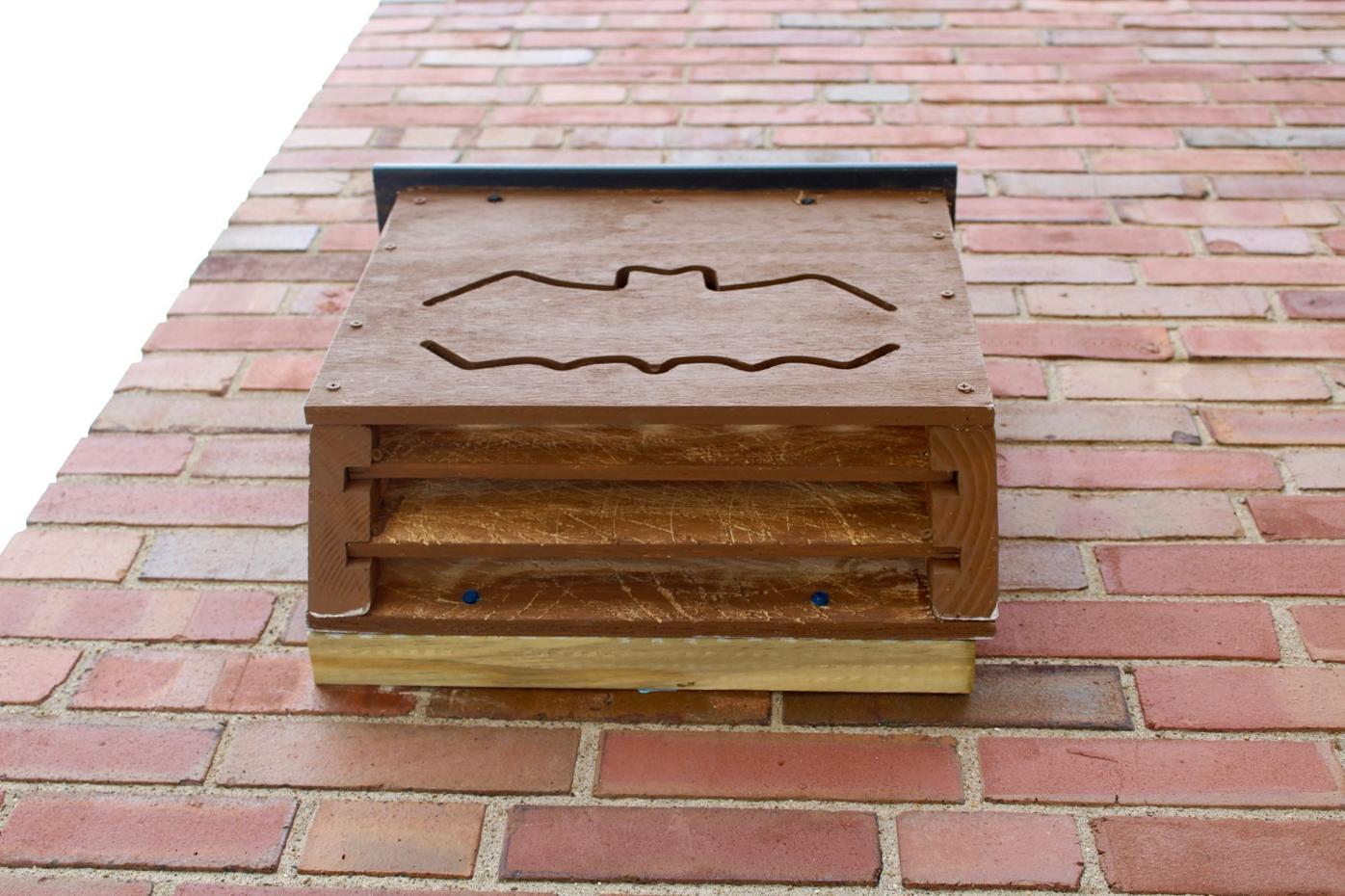 This bat dwelling is mounted to Schoonover Center and overlooks the Schoonover green roof.

These two bat dwellings may look short in stature, but they tower several feet into the air atop the hill near the mini-golf course at The Ridges.

This bat dwelling is mounted to Schoonover Center and overlooks the Schoonover green roof.

Students reacted with shrieks when they saw a bat in their dorm, but Schuyler wondered if the winged creatures were just in search of a warm place to rest.

“People are afraid of bats, but they’re just as afraid of you as you are of them,” said Schuyler, an OU Climate and Sustainability Ambassador and member of the university’s Green Initiative.

She and other students worked in recent weeks to create a collection of bat dwellings across campus as a sustainability effort.

Dr. Kim Thompson, a plant biology associate professor at OU and the director of student organization the Sustainable Living Hub, helped coordinate the project. Thompson outlined the importance of bats locally and beyond. For example, bats provide a major ecological service to humans: the extermination of insects. Additionally, some species help with pollination.

The mounted bat homes feature a cover and a few dividers, roughened to create a texture for bats cling to as they huddle inside, Thompson said.

The dwellings may appear small in size but can house nearly 80 bats with an additional 32 bats able to perch on a post behind the box, she said.

OU students created the bat dwellings in accordance with guidelines from the Bat Conservation International, a nonprofit that works to protect the winged creatures. Although bat box construction kits can be purchased online, they don’t always result in a dwelling that can keep bats happy and safe, Thompson said.

Location is key when placing bat dwelling, Thompson said. The six boxes the student crew created are scattered at the Ridges (one is part of the Outdoor Museum, two are in the Ridges Land Lab, and two are off the nature trail near the mini golf course) and on Schoonover Center’s green roof, strategically placed so the dwellings were within a quarter of a mile from a water source.

Additionally, bat dwelling boxes shouldn’t be located where cars frequent, like parking lots. Dwellings must also be positioned in a place where they are not exposed to an abundance of sunlight because of bats’ sensitivity.

Thompson said multiple factors have contributed to the endangerment of Ohio’s bat population, particularly its most common species, the little brown bat. Statewide, bats have been devastated by a fungal disease called white-nose syndrome, but predation and habitat loss also factored into the animals’ decline.

“Even though we’re in a smaller town, we’ve urbanized,” Thompson said.

According to the Ohio Department of Natural Resources, several bats species have been reported in the county.

Looking ahead, Thompson said she and other students associated with the green initiative may consider utilizing guano produced by bats to help fertilize soil on the green roof. Studies of the area’s bat population could be possible given the right filing of paperwork to Institutional Animal Care and Use Committee (IACUC), a regulatory body of animal research, Thompson said.