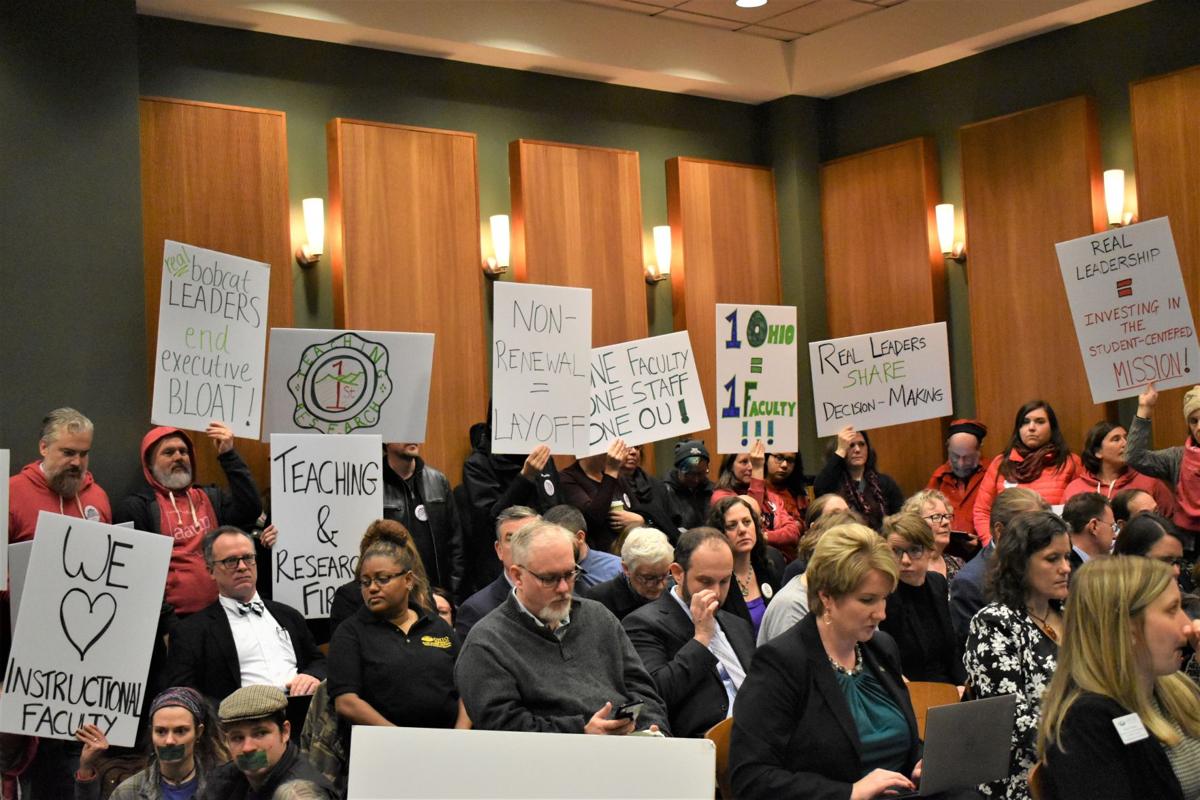 A sizable group of protesters (most of them OU faculty) showed up to OU's January Board of Trustees meeting in Walter Hall Friday morning. The group was quiet, standing in the back of the room as the meeting continued. Photo by Conor Morris. 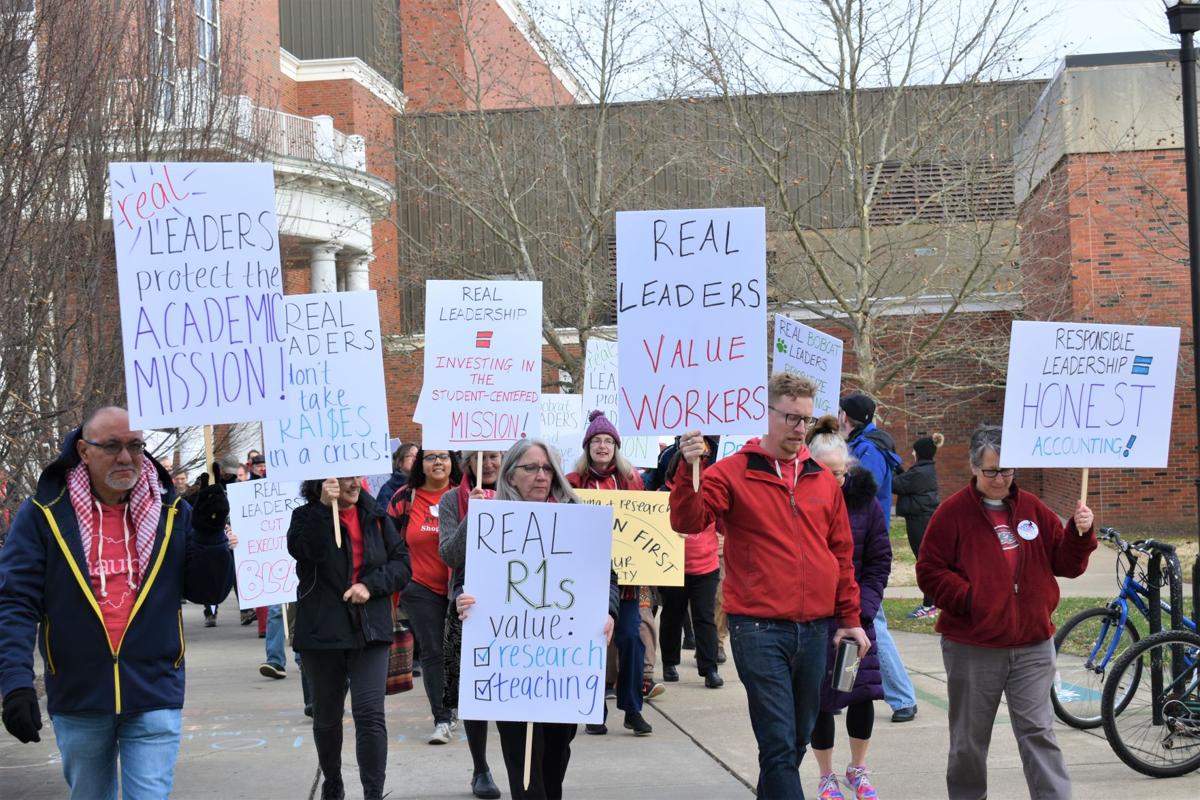 The group of protesters marched to OU's Walter Hall Friday morning, where OU's January Board of Trustees meeting was being held. Photo by Conor Morris.

A sizable group of protesters (most of them OU faculty) showed up to OU's January Board of Trustees meeting in Walter Hall Friday morning. The group was quiet, standing in the back of the room as the meeting continued. Photo by Conor Morris.

The group of protesters marched to OU's Walter Hall Friday morning, where OU's January Board of Trustees meeting was being held. Photo by Conor Morris.

Ohio University faculty members and others gathered last Friday at the south entrance of Grover Center in preparation for a “silent protest” at the January Board of Trustees meeting.

From Grover, more than 50 faculty members, students and other concerned citizens proceeded in silence to the meeting in Walter Hall with signs expressing concern and anger at what protesters predict that possible budget reductions could do – and already have done – to the university’s academic mission.

Ongoing discussions on budget reductions have given faculty members and other OU staff reason to worry. Each of OU’s academic and administrative colleges are working on planning for the next fiscal year with potential budget reductions in mind.

Separate from this current planning exercise, the OU administration last spring set a target of roughly $19.3 million in budget reductions that it asked the university’s various Athens campus academic colleges to make over the next four years. The university has stressed that the exact level of necessary cuts is a moving target.

Some academic colleges already have moved to not renew some faculty members’ contracts, while enacting other cost-saving measures.

As another way of attempting to cut expenses, the OU Trustees during their meeting Friday voted to approve the university offering early retirement incentive and voluntary separation incentive packages to two groups of employees: tenured professors or tenured associate professors (or administrators who hold such a rank); and some members of OU’s custodial staff. The university offered a similar retirement incentive plan to staffers on its regional campuses in 2018. The details of the current plans will be released in early March.

The silent protest Friday – organized by the OU chapter of the American Association of University Professors (AAUP) – followed a larger rally on College Green in late November 2019 organized by an OU student group that similarly decried the university administration’s spending priorities amid budget difficulties.

Friday morning, Susan Burgess, a distinguished professor of political science at OU, addressed her peers and the rest of the protesters in Grover Center before leading them to the Board of Trustees meeting.

Burgess charged that the number of administrators at OU has grown substantially in recent years. This has been happening, she said, while concern has been growing about the university potentially cutting instructional faculty positions (also known as Group II professors) while increasing the workload of the remaining faculty members.

Jennifer Fredette, an associate professor of political science who works as a communication officer for OU’s AAUP chapter, reiterated those concerns in an interview as the protest got under way Friday.

“I’m really invested in making sure instructional faculty are treated like members of our campus community,” Fredette said. “They teach so many of our students; they’re so wonderful. We really love them, and it’s so painful to see the instability this has introduced to their lives.”

Many professors in attendance at the protest expressed concern for their faculty colleagues who may be at risk of losing their jobs. Among them was associate professor of mathematics Premjit Singh.

“This crisis is bogus,” she told the crowd gathered in Grover Center. “They (administrators) are the ones who mismanaged the money. Why should we be getting fired?”

DURING A PRESS CONFERENCE after the OU Board of Trustees meeting Friday, Trustee Chair David Scholl insisted that the university is still in a “strong” financial position. However, he and President Duane Nellis both said the university needs to “pivot” to stay competitive in the field of higher education, especially with declining enrollment in recent years significantly impacting the university’s budget.

“So I would argue that it’s not a crisis, unless we don’t act,” Scholl said. “And I think we’re in a financial position to be able to manage well (due) to the strategic initiatives that have been defined by our president and by the leadership team.”

Deborah Shaffer, OU’s vice president for finance and administration, confirmed after the meeting that all positions that are vacant/open currently – due to retirements or employees leaving – will be kept open unless a hiring committee made up of herself, Nellis and Provost Chaden Djalali decides otherwise. After the Trustees approved the university spending about $65 million in reserves last spring, she added, OU had planned to use about $26 million of that for operations in the current fiscal year. However, the university expects to use only about $14 million this year, partly due to that decision to leave the open positions vacant.

The NEWS previously reported that most of OU’s administrative offices took a $4.8 million cut in 2018, along with another $1.5 million reduction expected to take effect in 2019, and another $2.15 million cut expected this year. That has meant layoffs in those offices.

An alleged lack of communication from university administrators is another concern the protesters voiced Friday morning.

“We’re hoping to see a change in some of that attitude toward actually talking with us about these decisions,” said Sarah Wyatt, an OU plant biology professor and the director of OU’s Molecular and Cellular Biology program. “Many of us have been here for decades, and our current leadership has not been here very long at all, and they’re making decisions about our lives, the students’ lives and the life of the town.”

The OU AAUP group is set to hold an open forum on Friday, Jan. 31, from 4 to 5:30 p.m. in Bentley Hall 306, on the budget and other faculty concerns and priorities.

THE PROTESTERS PACKED into the Board of Trustees meeting chambers in Walter Hall, where they lined the walls and filled the doorway, holding their picket signs high. They were welcomed by Trustees Chair Scholl before the scheduled meeting carried on as planned. Both Scholl and President Nellis said in comments after the meeting that they respect the protesters’ right to speak out, and commended them for not interrupting the meeting.

After about 15 minutes, the protesters quietly exited the board chambers, and as they left Walter Hall, Burgess led her colleagues in a chant.

“Whose university?” she called.

“Our university!” the crowd called back.

There was plenty of money to hire a high priced and unjustifiable new VP of Communications cabinet level administrator to put a spin on the assault on faculty and staff. And plenty to give repeated bonuses and pay raises to Nevis. Just like the McDavis administration, the current administration and president - who is not occupant of what should be Park Place - skim plenty off the top for themselves. Don't forget that the Republican appointed board of trustees calls the shots. It is sad to see what has happened to an institution that was once considered (thanks to Charles Ping and Robert Glidden) the academic equal of Miami of Ohio. The attack on liberal arts is particularly disturbing. These cuts will have drastic impact on our beloved Ohio U. Fight on faculty, fight on!