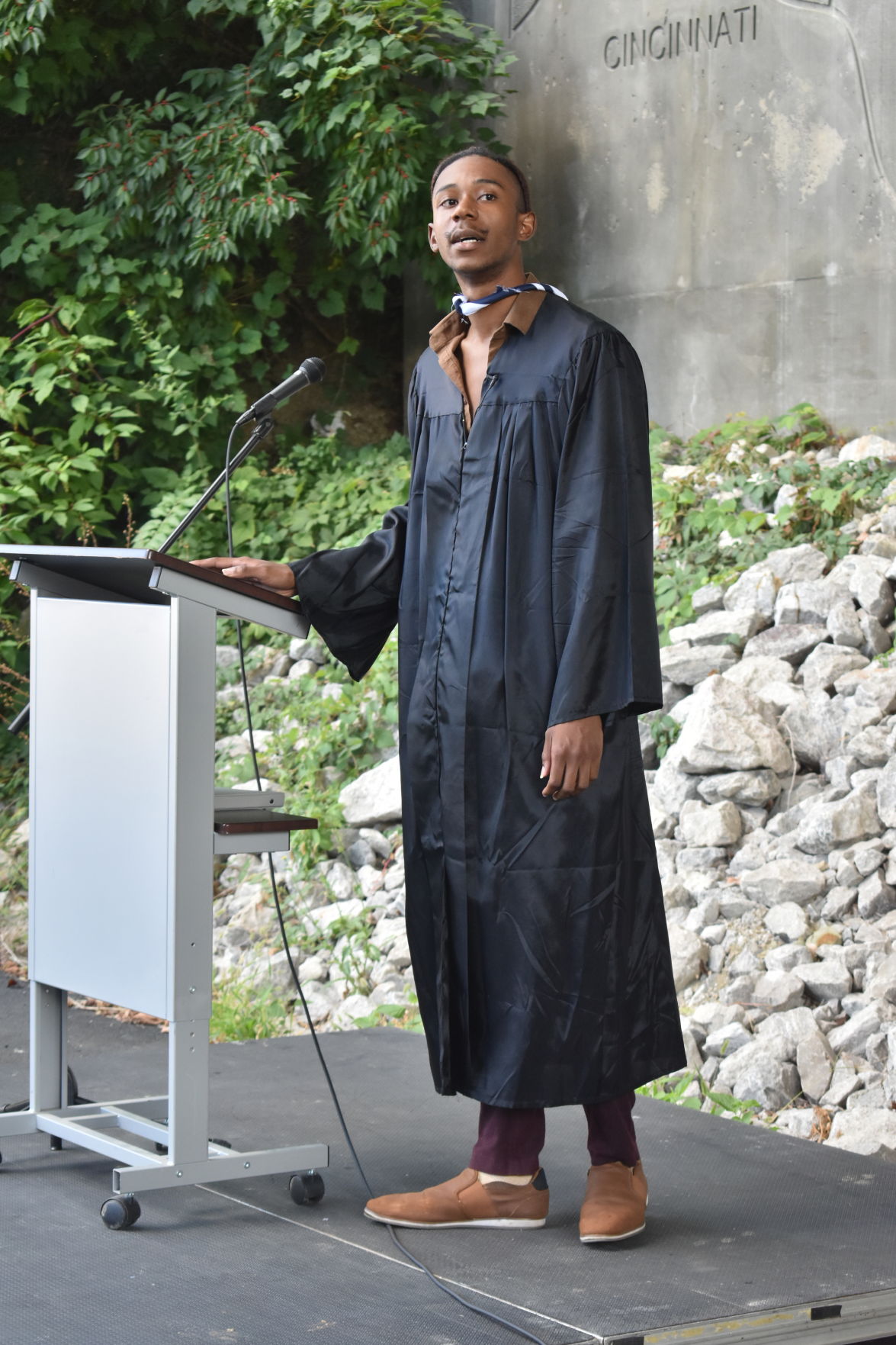 Kezia Waters, an OU grad student, speaks at the remembrance ceremony last Saturday on campus near the site of the lynching of Christopher Davis, a local black man, in 1881. Waters is wearing a symbolic noose. Photo by Conor Morris. 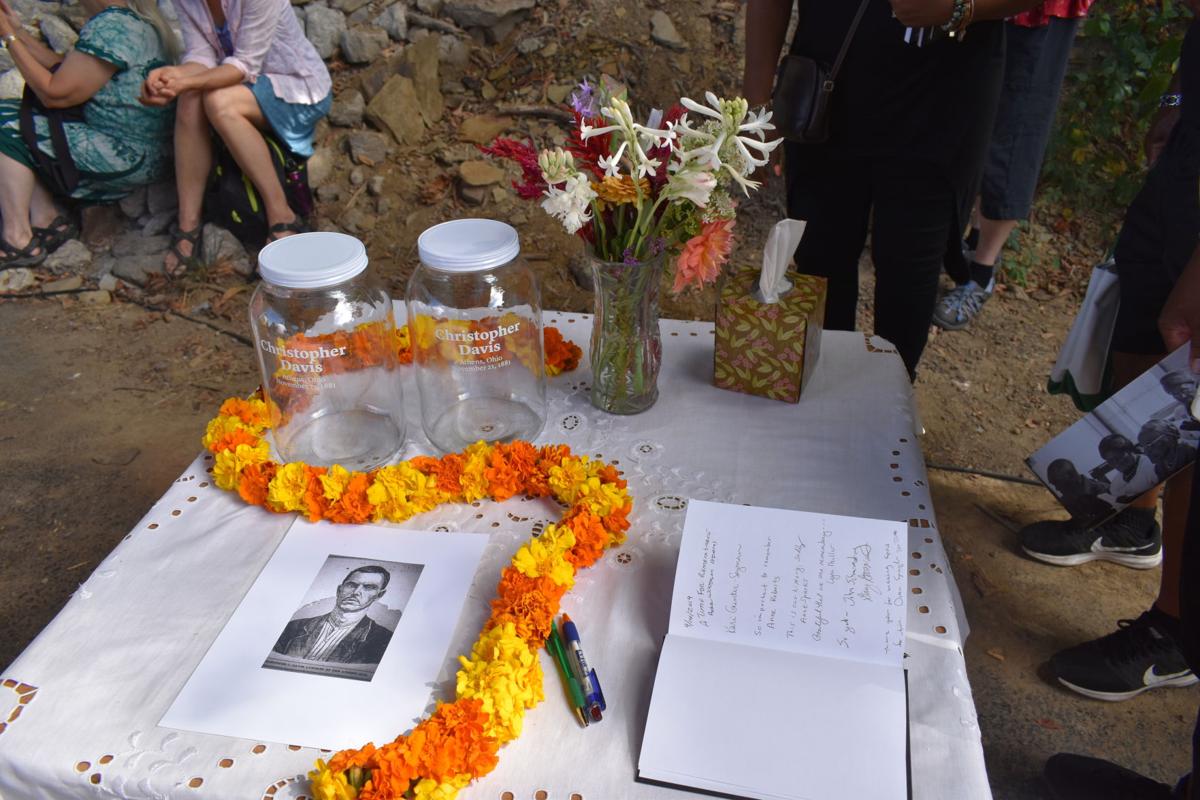 Event-goers were asked to sign this book in memorial of Christopher Davis during the ceremony Saturday. Photo by Conor Morris.

Davis – a farmhand and father of two – was remembered Saturday morning by more than 100 people under the Richland Avenue Oxbow Bridge, near the site of his extra-judicial murder (the old bridge over the Hocking River, before it was re-routed). While Davis was accused of a horrible crime – the rape and assault of a Lucinda Luckey, a white woman in Albany – he was never given the opportunity of a trial, a basic right afforded to all under the U.S. Constitution, speakers noted.

The event – called the Christopher Davis Community Remembrance Project – was put on by the Equal Justice Initiative (EJI) along with multiple local organizations and partners. Toward the end of the ceremony, soil near the location where Davis was lynched was dug up and will be sent to EJI’s Legacy Museum in Montgomery, Alabama. The EJI also has agreed to help fund a new memorial plaque near the location of the lynching.

Cherri Hendricks, president of the local Mt. Zion Baptist Church Preservation Society, which sponsored the project, called the event a form of “Sankofa,” a word from the Twi language of Ghana meaning “it is not taboo to go back and fetch that which is at risk of being left behind.”

“We acknowledge that this one life – this one life – which was one life of 4,400 documented killings of black people in America at the hands of an angry white mob,” she said. “And by doing so, we want to heal the trauma that was inflicted on Mr. Davis’ family, the psyche of the black community and the rendering of the social compact between a community and its members, that says ‘step out of line and we will come for you.’”

Kezia Waters, an OU master’s student in acting, performed a short monologue from the perspective of Davis, with a noose around his neck. He noted that Davis had known Luckey for some time, doing work for her as a farmhand and even allowing her to stay in his home when a house fire left her homeless.

Waters recalled the horror and pain Davis had felt in the months between his arrest and his lynching.

Tom O’Grady, executive director of the Southeast Ohio History Center, gave a lengthy explanation of the historical records around Davis’ lynching, noting that many newspapers at the time suggested or even outright said that the lynching was “done in the name of justice.”

“But, a lynching without a trial is not justice. It is an illegal and violent outburst for an alleged offense without a lawful trial – or possibly, it may be a distraction from the truth about a crime,” O’Grady said.

O’Grady noted that the mob that lynched Davis was never held to account for that crime, either – he was broken out of jail in the middle of the night and murdered.

O’Grady noted that prior to the news of the crime against Luckey and the lynching, Davis was described in records as a “very highly respected (person) and moral and genteel in his appearance.”

While she didn’t speak at the event, Jordan Zdinak, an OU master’s student in history, pored through historical records to help create a currently running exhibit at the Southeast Ohio History Center on the lynching of Davis, with help from History Center Executive Director Jessica Cyders and consultation from Ada Woodson Adams, a local resident who has for decades documented the history of black Americans in Appalachia.

Zdinak said in an article on OU’s website that records she’s seen suggest that there was very little investigation into Luckey’s allegations against Davis; moreover, what information she had uncovered suggests Luckey could have been assaulted by somebody else, Zdinak added.

“I want to portray the various information that I have found, since there was vastly different reporting not only at the time of the alleged assault but also at the time of the lynching,” Zdinak said in the article. “I want the viewers of the exhibit to think about the biases and prejudice during that time and how this (event) was portrayed in the media, mostly using harsh language like ‘the black beast’ or ‘mulatto ravisher.’”

Dr. Jennifaye Brown, with OU’s College of Health Sciences and Professions, explained that the history of Davis’ lynching plays into another narrative of racism in America – white doctors unearthing the bodies of black Americans in order to conduct medical research “for the benefit of the privileged.”

“Fast forward to 2019 and black people have disparities in health access, health equity and health status, in general because of the pervasive beliefs behind the actions of the individual who exhumed the body of Christopher Davis,” she said.

She asked everybody present at the event to consider what they can do to break down institutional racism in various parts of society.

“What is it that you can do at any level to decrease or eliminate the barriers that exist, be it structural, mental or economic, to change how black people in America are treated in terms of health access, equity and status?” she asked the audience.

Athens Mayor Steve Patterson also spoke during the event about the “anger” and “shame” he felt upon learning about Davis’ lynching in the past.

“I am sorry,” Patterson said, as if addressing Davis directly. “I am sorry in that things haven’t changed a whole lot since 1881. To my core that troubles me.”

U.S. Senator Sherrod Brown, D-Ohio, also offered some remarks at the event through Sam Miller, the Appalachian regional representative for his office (he said he was unable to make the event).

“Events like this today are an important first step as you gather to memorialize Chistopher Davis, you are showing that together, we must address our past and recognize the violence people of color have endured and continue to endure,” Brown wrote. “We need to work toward creating truly equal and inclusive communities.”

Young black men are killing each other every single day and this is your priority?

So are White men but you are a Racist so you're only focused on Black on Black Crime.

The word RACIST has become a place holder for people too ignorant to know what they're talking about.

And for the billions who aren’t illiterate or ignorant, the word “racist” is what? A simple matter of being “over the top?” Thank you Archie Bunker.

Poor guy. Cannot fathom that he was born White and because of his skin color he is privileged. Woe is you.