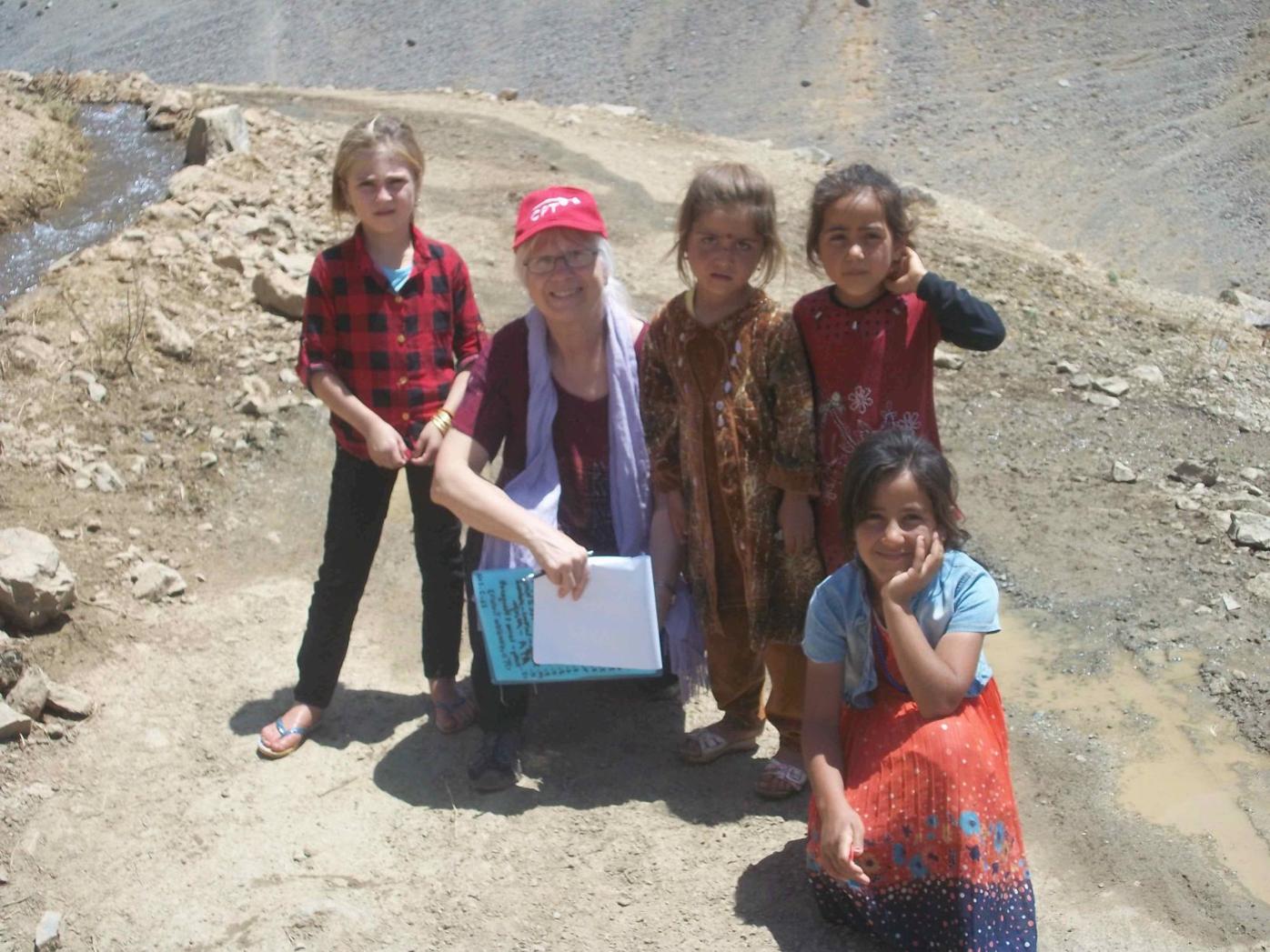 Above left: Peggy Gish had just returned from Iraq when she participated in a 2003 protest outside the Union Street entrance to O’Bleness Hospital Friday afternoon. The sign read, “To bomb a hospital in Iraq is a war crime.” Above right: Gish with Iraqi children in 2004. She made multiple extended trips to Iraq after the U.S. invasion, documenting the war’s effect on civilians —and also talking with U.S. military personnel deployed in the country. 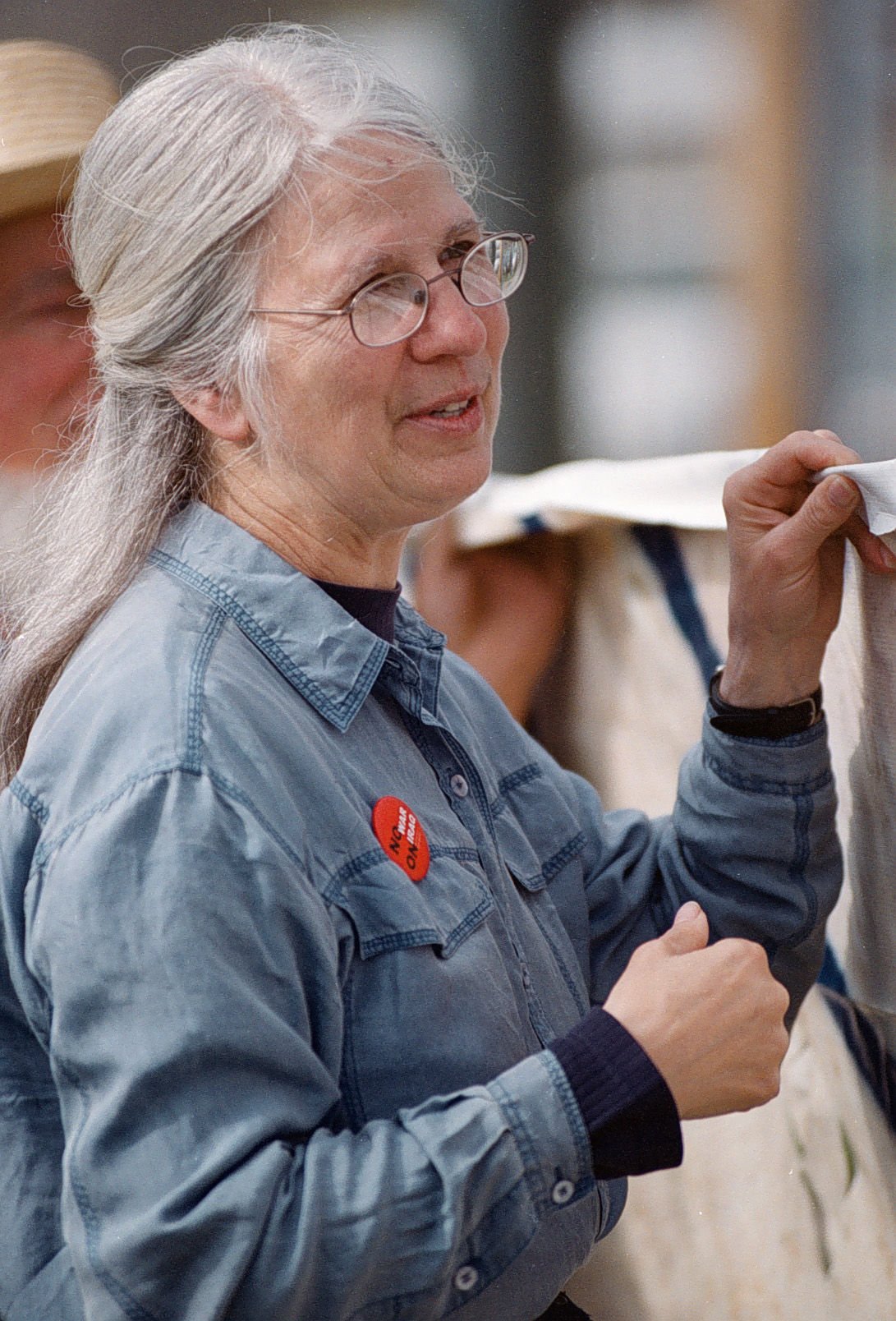 Gish had just returned from Iraq when she participated in a 2003 protest outside the Union Street entrance to O'Bleness Hospital. The sign read, "To bomb a hospital in Iraq is a war crime."

Above left: Peggy Gish had just returned from Iraq when she participated in a 2003 protest outside the Union Street entrance to O’Bleness Hospital Friday afternoon. The sign read, “To bomb a hospital in Iraq is a war crime.” Above right: Gish with Iraqi children in 2004. She made multiple extended trips to Iraq after the U.S. invasion, documenting the war’s effect on civilians —and also talking with U.S. military personnel deployed in the country.

Gish had just returned from Iraq when she participated in a 2003 protest outside the Union Street entrance to O'Bleness Hospital. The sign read, "To bomb a hospital in Iraq is a war crime."

Like most American adults, Peggy Gish remembers where she was on the morning of September 11, 2001, when the first airplane collided with the North Tower of the World Trade Center. She and her husband, Art, were at their farm outside Amesville. Art was working in the garden.

“We were shocked, horrified — it was truly horrible,” Gish recalled. “We didn’t know what it meant.”

Then another plane slammed into the South Tower, and a third into the Pentagon. A fourth crashed in a field in rural Pennsylvania. And like most American adults, the Gishes wondered how the United States would respond.

Unlike most Americans, though, Peggy and Art Gish were already well known for their peace activism.

“We were starting to fear it would mean war, that we would respond in an aggressive way,” Peggy said.

The U.S. did respond aggressively, and quickly. Three days after the attacks, Congress passed the Authorization for Use of Military Force Against Terrorists, which President George W. Bush signed into law on September 18. The Central Intelligence Agency dropped five operatives in Afghanistan on September 26; the first bombs fell on October 7.

Most Americans — 88% supported the invasion of Afghanistan. The Gishes were not among them.

“War is not the answer to dealing with terrorism,” Peggy said. “They see the U.S. coming in as a big bully. It’s counterproductive.”

The Afghanistan war was born from American anger and desire for retribution, she believes. “It’s real easy for us as humans, when a tragic thing happens, to operate out of our emotions,” she said. “But we need to think, ‘Wait — let’s think this through.’”

For example, American leaders attributed the attacks’ motivation to hatred of the U.S., the West, “freedom,” and other abstract concepts. Invading Afghanistan was an act of self defense, they said. But opponents of the war — including scholars in multiple disciplines — have pointed to episodes in history and to U.S. policy decisions that turned feelings against the West.

“A lot of good thinkers have addressed this topic,” Gish said. “The key thing they recommend is to work at the problems that cause terrorism, such as poverty. Western nations Western nations colonized and then exploited their resources. We supported dictators. These are the seeds of terrorism.”

Instead, she said, the Bush administration rushed to war because it was devoted to supporting and growing the military and the defense industry — the military-industrial complex that President Dwight Eisenhower warned against in his 1961 farewell address.

“It was a failure of leadership,” Gish said.

As the U.S. began drumming up support for a war in Iraq in October 2002, Peggy flew to Iraq as part of a peace team coordinated by the groups Christian Peacemaker Team and Voices in the Wilderness. She and other activists lived in Iraq for five months, including the first 10 days of the assault on Baghdad. The Iraqi government expelled them in late March 2003 for visiting a bombing site without permission.

Peggy returned to Iraq multiple times over the following five years, often writing letters to the Athens NEWS to tell readers what she had seen. (Art also went to Iraq on peace missions before his death in 2010.) In January 2007, she was held captive for two days in northern Iraq; after her release, she chose to remain in the country.

“‘I have stayed on here for many reasons,’ she wrote at the time. ‘It has been helpful for me in my healing after the kidnapping. I have felt it important to connect with authorities and do necessary work.’”

Her trips to Iraq were revelatory — not about war, which she had seen firsthand on previous peace missions on the West Bank, but about the military.

“There’s always been a division between military and peace people on both sides,” Peggy said. “We didn’t reach out enough, didn’t listen enough. My time in Iraq helped me to be more sympathetic to military people. They thought we were saying that their sacrifice wasn’t worth it. That was hard to hear.”

Now, Gish said, she is careful to distinguish between her criticism of American foreign policy and her respect for the men and women who are ordered to implement it.

“I honor the soldiers and military families for their willingness to sacrifice and caring for our country. They’re willing to give their lives,” she said. “When I was in Iraq, soldiers shared their struggles. It was hard. I’m not angry with them or demeaning of them. They are victims too — victims of policy.”

Gish has experienced humanity at its worst. Decades of activism have not brought about peace. Americans are far more divided now than they were before 9/11 or even in the first years afterward, she said.

And yet Peggy Gish remains hopeful.

“I’ve met so many beautiful people internationally, of different faiths and ethnicities. I wish everyone could meet the people I’ve met,” she said. “Having done that gives me hope — I’m doing this with other people around the world. What’s the alternative if we didn’t? ‘I can do no other.’

“Humanity is worth the work.”