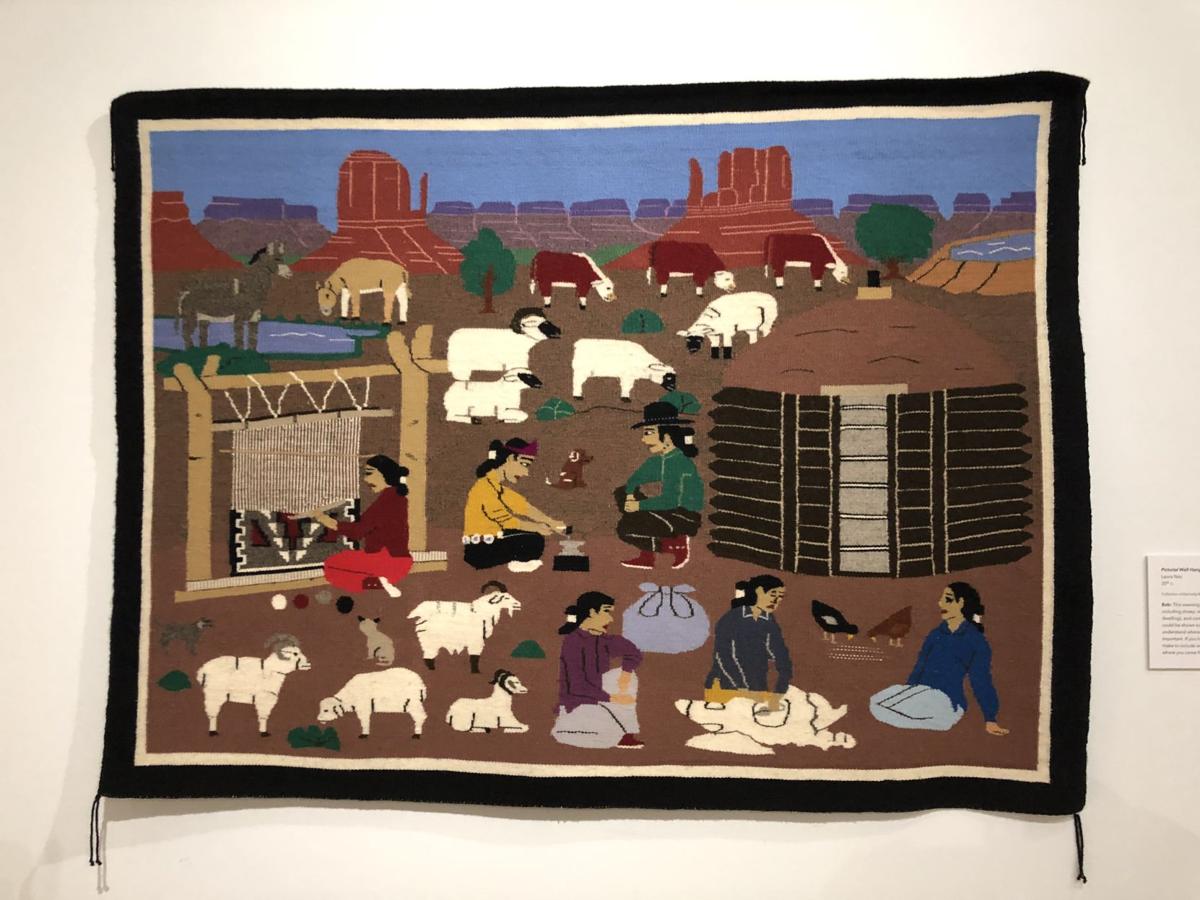 This weaving, credited to Laura Nez, “captures some symbols of Navajo life, including sheep, weaving, the land, a hogan (dwelling) and community...” 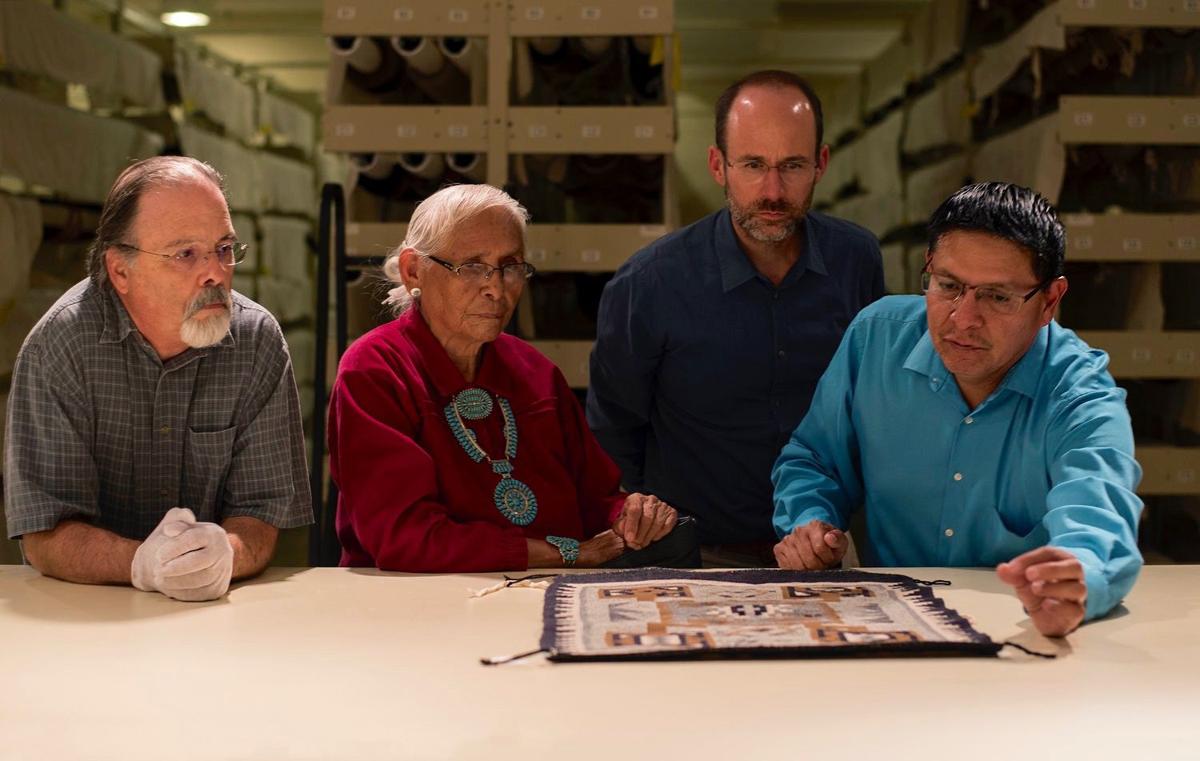 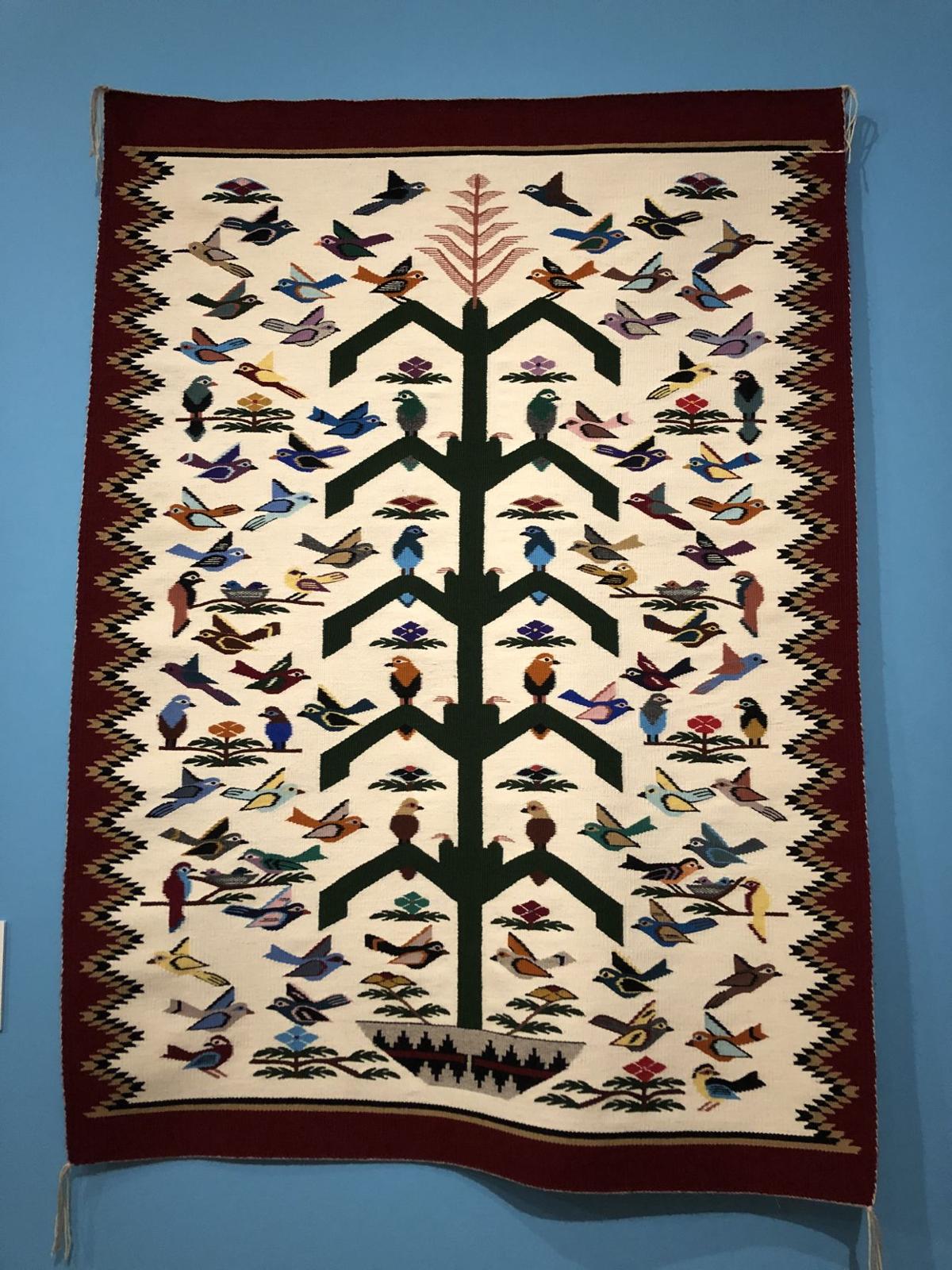 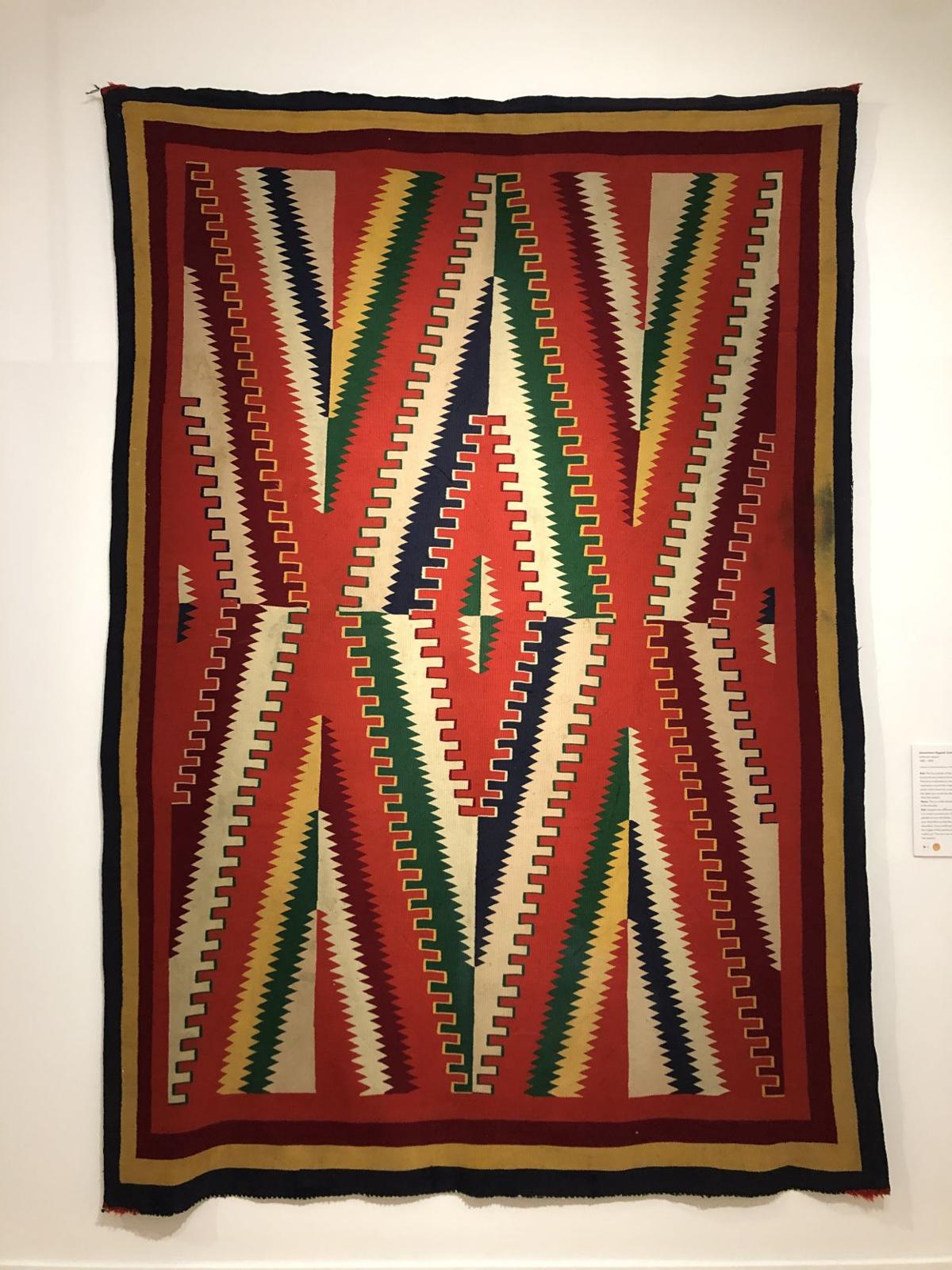 A Navajo/Dine weaving in the ongoing exhibit at Kennedy Museum of Art. It's described as a “Germantown Klagetoh Center Design Rug” from 1885-90.

The exhibit drawing from the Edwin L. and Ruth E. Kennedy Southwest Native American Collection and co-curated by OU mathematics professor Robert Klein, mathematics professor at Diné College Henry Fowler, and Fowler’s mother, Navajo weaver Sally Fowler, according to a news release, explores the Diné (Navajo) weaving design from the perspective of their traditions and beliefs, and how fundamental mathematical ideas are also embedded in the designs.

“Navajos say that weavings have lives and can share stories since each design is specific to the weaver who computed the thinking and design process behind it,” Klein said in the release. “This is the frame in which we guide our visitors in this exhibit, allowing them to understand that within the mathematics and geometry utilized to create each weaving is the voice of the weaver behind it.”

Among the Diné, weaving is regarded as a spiritual act, rooted in the earth, and an expression of their place in the world, the release explained. Mathematics are integral not only to the designs, but also to Diné cosmology. Many designs include inconsistencies and imperfections, sometimes purposefully, the release said, acknowledging the contradictions in life, but also affirming the will to achieve harmony.

“Bringing in math ideas and linking it into weavings is enlightening and something that can spark interest into delving into further ideas of math in a larger sense – it coincides with STEM to STEAM initiative,” exhibitions and collections manager at the Kennedy Museum Jeffrey Carr said in the release. “This exhibit is aimed to open the doors of curiosity and initiate dialogue with people who come to see it. We want to engage the public on how math is transformative for all people and in various ways.”

Klein, who is the executive director of the alliance of indigenous math circles and cofounded the math circles project on the Navajo Reservation with Fowler over the last few years, started working with math circles in 2012, according to the release. Traditionally, math circles are a way to bring mathematicians and students together to work on interesting problems that act as a hook and lead to further discussion about mathematics. Klein explained in the release that math circles can be found all over, but he helped bring them to the Navajo nation and is currently trying to expand them to other tribes across the nation since mathematics is used in their everyday lives aside from education.

The exhibit immerses the public firsthand in how math circles can be utilized on reservations through numerous interactive activations, the release said. Visitors can look at a weaving under plexiglass and try their hand at measuring the designs using their hands, forearms and fingers, similar to the approach a Navajo weaver takes when creating a weaving.

Also featured will be a large loom structure mounted on the wall with magnification of the workings of a loom, tessellation activities where visitors can arrange their own designs, and a projection that will be aimed at the floor and show animations of how Navajo dwellings are laid out and how geometry is used to help create these dwellings.

“It is remarkable that the Kennedy Museum and our small community in Southeast Ohio are the stewards of this collection,” Klein said in the release. “We are responsible for not just locking them up in the archives but bringing them out and letting them tell their story. It is a privilege to share this culture and their stories with the community, and an even bigger honor to have the Fowlers help me tell it.”