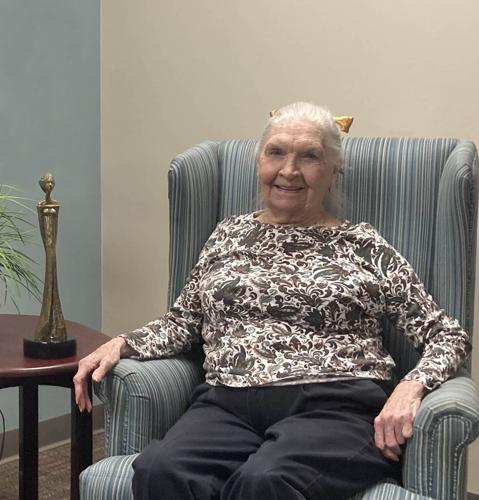 Beverly Schumacher and the "Homage to Woman" sculpture by David Hostetler that she recently donated to the Southeast Ohio History Center. 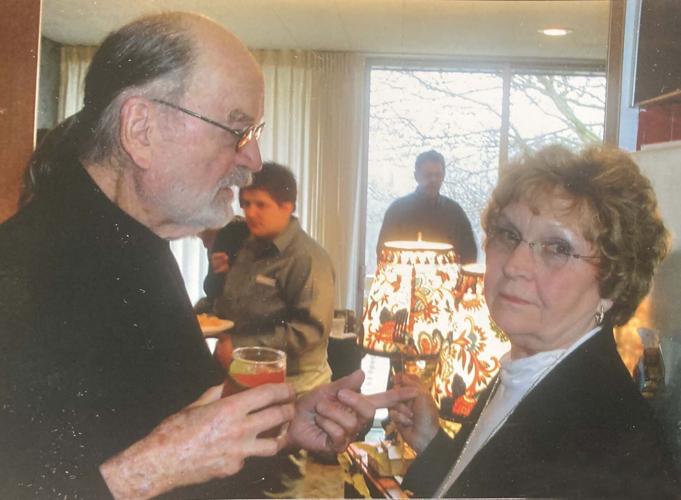 Top: Beverly Schumacher and the “Homage to Woman” sculpture by David Hostetler that she recently donated to the Southeast Ohio History Center. Photo by Tom O’Grady. Above: Schumacher with Hostetler in the 1990s.

Beverly Schumacher and the "Homage to Woman" sculpture by David Hostetler that she recently donated to the Southeast Ohio History Center.

Top: Beverly Schumacher and the “Homage to Woman” sculpture by David Hostetler that she recently donated to the Southeast Ohio History Center. Photo by Tom O’Grady. Above: Schumacher with Hostetler in the 1990s.

Beverly Schumacher has been contributing to the history and genealogy of Southeast Ohio for a half century, and she is still at it. Beverly identifies herself as a professional volunteer. I first met her in the early 1980s. She contacted me when she was the leader of an effort to clean up trash along stretches of a county roadway. She continued to head up that effort for a couple of decades.

But, while she was doing that, she was also immersed in her efforts as a volunteer with O’Bleness Hospital and the Visiting Nurses Association. While she was doing those things she was volunteering at the Athens County Historical Society and Museum and Genealogical Chapter and played a key role in the development of that organization’s library. A cursory review of the Southeast Ohio History Center’s on-line library search brings up nearly 70 publications under Beverly’s name.

Visitors to the Southeast Ohio History Center’s Jim and Shirley Hayes Family Genealogical Center can access the wealth of information Beverly gathered in these numerous publications. She wrote a book of Athens County Family History in 1987, a History of Clarks Chapel, and a History of Albany. Other books, journals, and publications include a half dozen family histories, birth records and death records from Athens and Hocking counties, cemetery inscriptions from a number of graveyards in the region, federal census records from the 1870s and 1880s, bible records, historical society newsletter index, local histories, ancestor charts, estate records, historical atlas index, cemetery index, cemetery inscriptions, birth affidavits, and more. The list goes on.

There is no telling how many other works are in the collection to which she contributed without adding her name. She has donated boxes of books from her own collection which are also used for local history research. Her contribution has been enormous. She has been not a small part of this growing institution.

Beverly served on the board of directors of the Athens County Historical Society and Museum when the organization transitioned to become the Southeast Ohio History Center. Her input and guidance was enormously helpful. Once relocated she served on the organization’s building committee to help guide the repurposing effort and ensure the space was being used efficiently.

Beverly Schumacher’s most recent contribution to the Southeast Ohio History Center is a small bronze sculpture done by local artist, the late David Hostetler. Hostetler signed the piece and inscribed it “To Bev and Dale – with love and thanks for helping me and Sus in so many ways…David …Coolville Ridge – May 1993 “Homage To Woman” Bronze. From the inscription it sounds like Beverly was volunteering some of her time in support of David Hostetler as well.

In addition to her donation of this valuable sculptural piece Beverly also donated a handmade quilt in which she invested countless hours. Like everything she has given to her community, it is unmeasurable.

It is difficult to convey the magnitude of Beverly’s tireless efforts enriching Athens and southeast Ohio. She did all of this giving without fanfare or directing attention to herself. She highlighted the work of others, not herself.

Museums and historical societies are typically not funded by federal, state, or local tax dollars. They exist because of the kindness of their local communities through membership, philanthropy, gift store revenues, and ticket sales for events, tours and admissions – and because of their volunteer base, a resource that such organizations could never afford to pay for. Thank God for Beverly Schumacher and all the other Beverlys out there that make not-for-profits and these important heritage resources possible.

Tom O’Grady is director of development and outreach and Director Emeritus of the Southeast Ohio History Center.